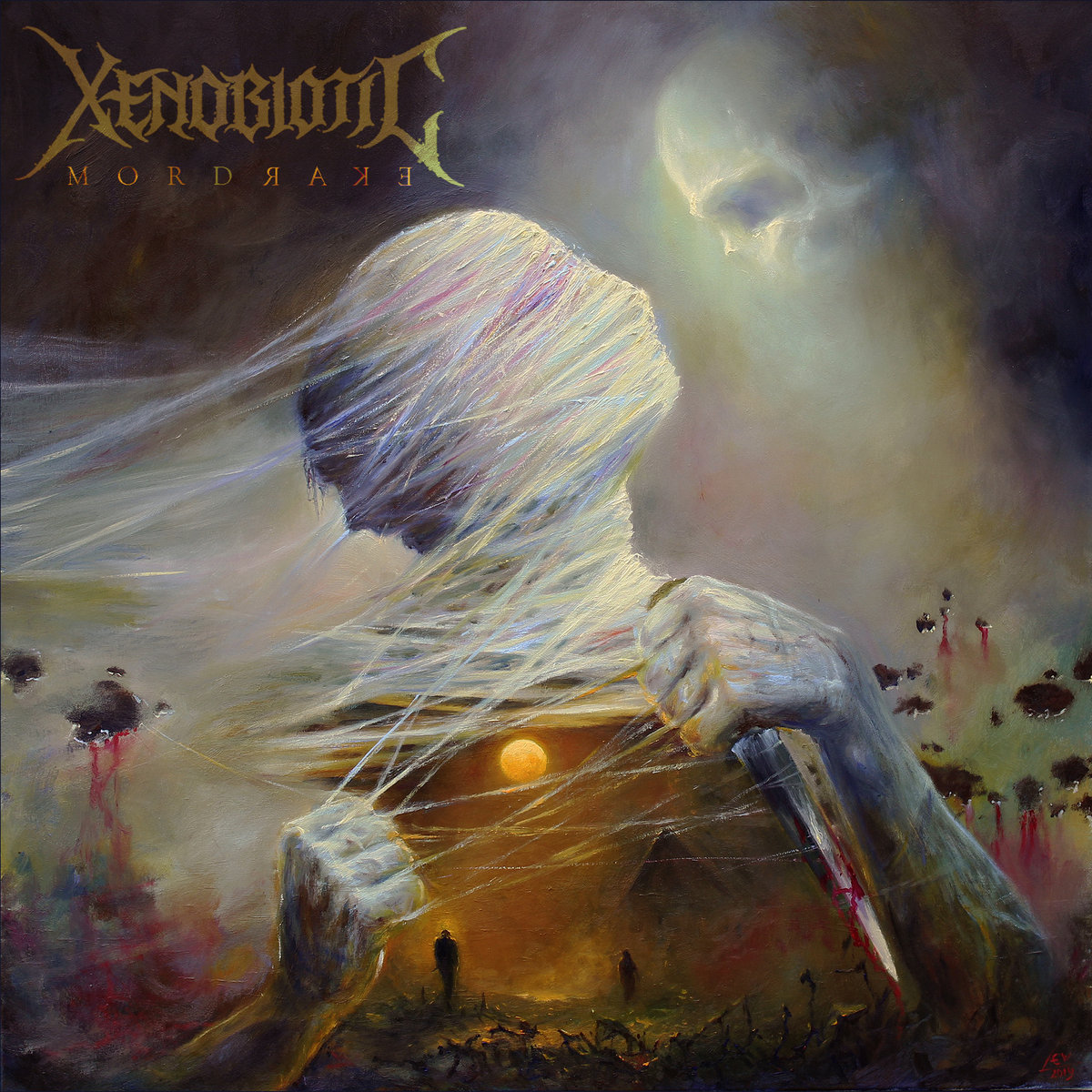 By Robert MiklosFebruary 17, 2020 No Comments

Xenobiotic unleash a balls-to-the-wall, fire and brimstone kind of hell with their second album.

Man, 2020 barely kicked off and we’re already up in the middle of some amazing releases; of course, Xenobiotic‘s newest creation is part of these illustrious ranks. Mordrake is the title of this their fresh album, and it marks their second full-length release. Xenobiotic are a death metal band hailing from Australia, a land of many cool, forward-thinking bands. Comprised of Nish Raghavan and Cam Moore on guitars, David Finaly on bass, TJ Sinclair handling the vocal duties, and Mikey Godwin behind the drum kit, they play an interesting blend of technical death metal splattered with deathcore influences and all sorts of various other tinges that give their sound proggy overtones. The band’s name is an agglutination of two words of Greek origin: Xeno, meaning ‘foreign’ or ‘stranger’, and biotic, which relates to or resulting from living organisms – thus, each listener can draw their own variation of what the name ultimately means within the context of their music.

I honestly have no idea where to even begin, so I guess anywhere will do. Mordrake is an absolute mammoth of an album, in nearly every aspect that pertains to it. It spans just a little over forty-six minutes, and it bludgeons you into oblivion for most of that runtime. There’s not a lot of technical death metal that successfully goes beyond the half-hour mark, especially given the fact that the songwriting has density resembling that of a dying star. I mean, after the album begins you have roughly one minute to strap in and get ready to be pummeled senseless, save for a few other moments in the latter half of its tracklist. “Insomnia” opens up eerily and continues to push us along with a nasty groove that soon erupts in a torrent of pissed-off riffs and face-melting growls and shrieks. There’s a good dash of dissonance sprinkled in throughout to make things even heavier, and also a really sick breakdown at the end of the song that warrants some heavy headbanging.

“Light That Burns The Sky” and “Inverted” basically continue the whirlwind of anger, ramming a veritable avalanche of sound down your throat. This isn’t some mindless collection of bomb blasts and E-string chugs at high speeds, mind you; there’s a lot of engaging variation that makes use of nearly everything you can picture in the death metal repertoire. Somehow the band manages to cram so much into such little space without it feeling overcrowded and cumbersome, which is an achievement on its own if you ask me. “Acedia” follows up with a more deathcore-oriented timbre, giving us maybe a small increment of a breather, since it relies more on groove and atmosphere. In its footsteps, “Dysphoria” acts as probably the most aggressive interlude ever and leads the way to “Saphirs”, a track that basically kicks everything back into full throttle. “Saphirs” also comes packed with a very atmospheric intro and outro, as well as a very tasteful guitar solo slapped smack-dab in the middle of it.

Similarly to “Saphirs”, “Fractured” also boasts some atmospheric edges and another very tasteful solo, leaning a little more on the technical aspect and those proggy overtones while still infusing plenty of that sweet groove from the deathcore side into it. This is probably my favorite track, thanks in no small part to the way it unfurls and of course the strong staccato chugs that have an odd timing. Up next is “Thalamus”, which acts as what I think is another very inspired interlude-style song. Quite frankly, I don’t even know how to describe it, so I’ll just let each of you hear it for yourselves to try and make sense of it.

“Grieving The Loss Of Self” seems to kick everything back into mayhem mode once again, and yet it oozes into the ending of the album with an eerie and loose texture within the last quarter of its duration. In comes the title track to end the brutal journey that is Mordrake. It is split into two songs, “Mordrake I Reverie” and “Mordrake II Acquiesce”. I’m not really sure why this split was necessary, because it could work just as well as one longer song. The ending gives us a feeling of circularity, since it more or less goes along the lines of the beginning in terms of pretty much everything it presented musically, right down to the atmospheric tinges. Now that’s what I call a power move right there: open up strong, close just as strong, and have no weak spots throughout. It may have been implied before now, but I’ll just specify this for the sake of clarity: the production value on the record is flawless as far as this style of music goes. Everything is nicely fleshed out and nuanced, making all of this an all the more satisfying affair. Needless to say that the performance aspect is absolutely on point as well.

Mordrake isn’t here to challenge what you know or expect from these genres, nor anything else, really. It’s only here to bash your very essence in with its raw power and brutal delivery, sounding massive and epic while doing so. Xenobiotic hold nothing back and make sure to make that perfectly clear. If you’re looking for that perfect wall of death or circle pit tune, or even just to be torn asunder by some relentless music, you’ve arrived to the right spot!