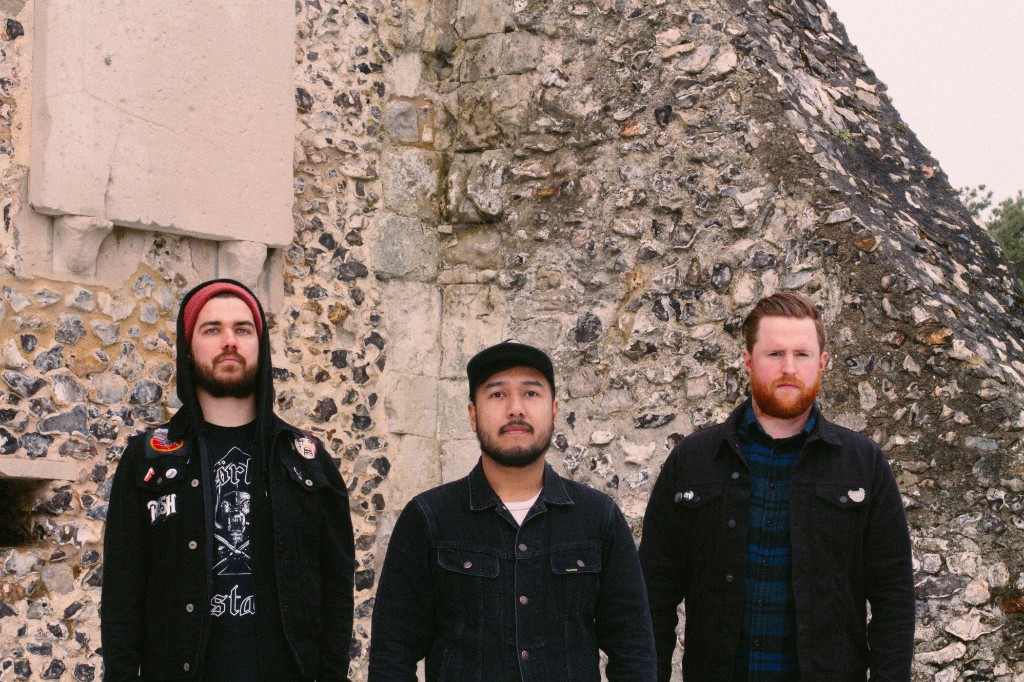 Have you ever heard a riff that kicks ass so hard that you just want to listen to it over and over again? I have, every once in a while – the opening riff to Cloudkicker’s “Dysphoria”, the bridge riff in Megadeth’s “Rattlehead”, most recently a riff from Garganjua’s “Mire”, to name a few – but the first time I distinctly remember was hearing the opening riff to URNE’s “Dust Atlas”. I’m sure there were times before that, but I think what got me about this one is that I wasn’t expecting it. I was browsing a blog to see if it might be an appropriate choice to host a premiere for my own band’s new single, and I stumbled across a video for URNE’s freshly released “Dust Atlas”, from their EP The Mountain Of Gold. I’d never even heard of URNE, and damn, what a first impression. It’s the kind of riff that makes your heart rate go up a few notches, forces you to pull an unattractive face, and inspires uncontrollable head-nodding. It’s upfront, sludgy, and exactly what I had been looking for, but didn’t know I needed.

Formed in 2017 and based in London, URNE are a three-piece, made up of bassist/vocalist Joe Nally and guitarist Angus Neyra, formerly of Hang The Bastard, and Rich Wiltshire on drums. Nally explains the inception of the band: ‘after Hang The Bastard ended we still had the drive to keep on creating music…we just tried to write what felt natural at the time. We had a few ideas laying over from HTB but we just wanted to keep things simple and direct for the first EP.’ Thus, URNE’s first release, The Mountain Of Gold, came to be – it’s 25 minutes of riff-laden goodness, recorded in five days and presented to the world in 2018. The aforementioned sick opening riff of “Dust Atlas” certainly encapsulates the spirit of simplicity – it’s slow, straightforward and a perfect opener for the EP.

Before the vocals even come in, “Dust Atlas” kicks ass three times with three different riffs –the whole song is just a riff banquet, showing glimpses of The Sword, Mastodon, and Metallica. If you’re thinking this all sounds like too much riffery (is there such a thing?), let me reassure you, there is contrast. The choruses are a bit more chilled out, with more stripped back drumming and a slightly more harmonically rich guitar line, and clean vocals taking over from previous harsh yelling. The vocals are harmonised throughout in a way that’s slightly reminiscent of Alice In Chains, and there’s an extremely satisfying vocal bend in there. The bridge section, too, is a contrast, based almost entirely around the bass line, the guitar floating on top like mist. “Dust Atlas” ends in the same no-bullshit way it started, with, you guessed it, a balls-to-the-wall riff.

“The Lady & The Devil” is another example of ruthless riffing, again showing the influence of early thrash, but in a slightly doomy way. The vocals are stylistically similar to The Sword, a nice delay fattening them up while creating space. Nally adds a bit of growl in the chorus that makes the back of my neck prickle. The first solo Neyra plays on this track that sounds like a fusion of Brent Hinds and Kyle Shutt, the second one is a bit more unusual. The use of some slightly more exotic scales and Neyra’s choice of notes to dwell on creates a delightful sense of mystique and unease – I love that shit. The solo turns into an almost metalcore harmonised lead line, before returning to the track’s opening idea.

The title track again features hefty riffs played with ruthless distortion, but in a more mid-tempo style; the opening riff wouldn’t seem out of place on The Sword’s “Warp Riders”. Nally’s vocals in the verses are more aggressive, and when he begins singing a cleverly modulating melody in the chorus, it creates a nice point of difference. The lyrics are fittingly darker on this track:

Again, lines so simple, but so perfect for this setting. The chords behind the chorus are again reminiscent of newer progressive metal bands like Mastodon, the guitar solo is a pleasantly melodic experience in the style of Baroness. A driving, widdly-ended riff somewhere between Mastodon and Megadeth, complete with one ultra-satisfying triplet variation, chases “The Mountain Of Gold” back on itself to its starting two riffs, and it ends on a straight-up, palm-muted chonker.

“The March Toward The Sun”, featuring guest vocals by Josh Middleton, is the most different track on this EP, a bit less doom and a bit more Trivium. Unusually, the first half of this track is based almost completely on one riff idea, but what the track lacks in variety at the beginning, it makes up for as it goes along – a ripper of a solo, some gorgeously sorrowful and dissonant chords that weave their way through all sorts of imagined landscapes, and an open, strictly straight chug section that backs a beautiful clean vocal. An almost post-rock wash of tremolo guitars takes over from the singing, and is the last thing left hanging as the track fades.

Talking about the writing process, Nally states that the members of URNE ‘all just write down riffs or do voice notes of ideas and send them across to each other. Then we take it in to the practice room and tweak it to our liking’. The Mountain Of Gold was written primarily by himself and Neyra due to some initial lineup issues, but it all fell into place once Wiltshire joined the band. Regarding concepts, Nally explains that he comes up with them at the start of the process as it helps him picture everything as they continue writing. When asked about the concept for The Mountain Of Gold, he elaborates:

‘The story behind The Mountain Of Gold is very loose and at the time I was struggling to find inspiration when it came to writing lyrics. So I made up a story, which went along the lines of: every 100 years a cult of ‘witches’ who are in connection with devils/demons come to earth to regain balance within and also take life and souls of humans, which gives them power and energy. When that is complete they return to their world which is connected to earth (a world beyond our sight for us but they see over everything), and with the energy they took away from earth it allows them to keep living and also to control what happens on earth (the last section of “The March Towards The Sun” touches heavily on this). Basically evil rules earth. Along with this it is all through three different people’s views (a different story for every 100 years).’

URNE are currently in the final stages of writing songs for their next release, a full-length album they are hoping to record around May this year. They have been playing some of the new songs live, and Nally believes that the album will be ‘a massive step up from The Mountain Of Gold’. Stylistically, he says it will be more progressive, adding that ‘we all used to play in progressive bands and I think we all looked back to what we loved when growing up and by doing that I think we have something really strong.’

This April, URNE will be supporting Los Angeles rock band 96 Bitter Beings in London. In the past, Nally says they’ve enjoyed playing alongside Mountain Caller, and once travelled to Belgium for a gig only to travel back the same night. Concerning his hopes for the future, Nally simply states, ‘I feel we have a strong album to come out so I can only hope for the best’. Well guys, I’m sure keen to hear it!