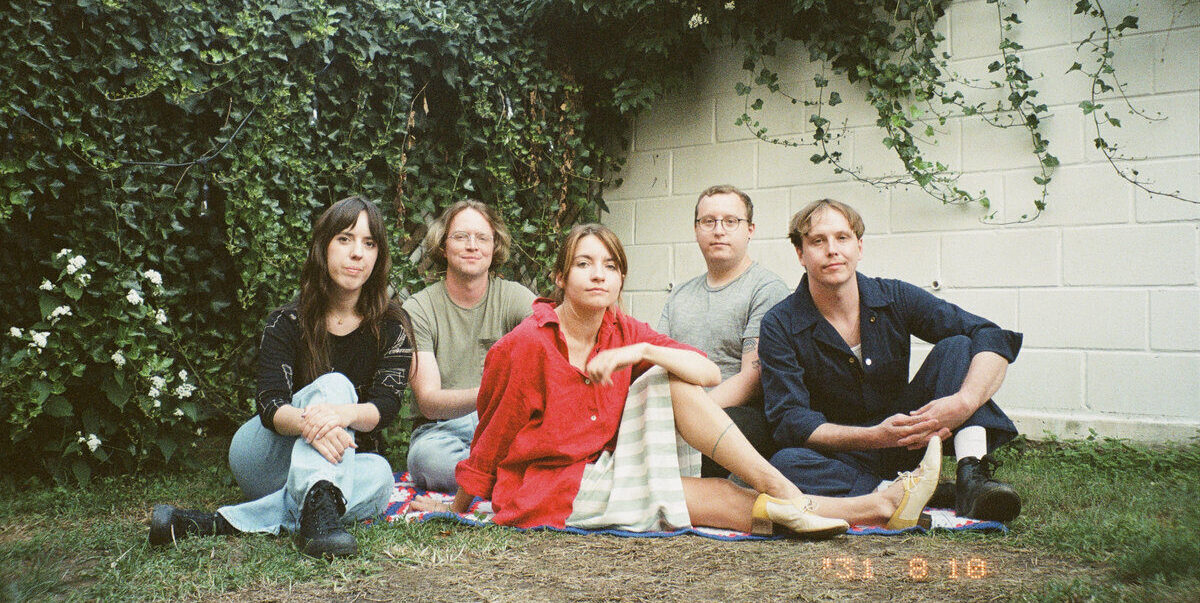 By Shaun MilliganSeptember 2, 2022 No Comments

On 90 In November, Why Bonnie invite us along for the ride as they journey to the point at which music and memory collide in a warmly welcoming blend of indie rock and reminiscence.

Great times require great music. Bad times arguably require even greater music. Wherever you’re at in life right now, Texas quintet Why Bonnie can provide. If you missed the boat on their 2020 EP Voice Box (as I did), the band serve up endearingly catchy tunes – infused with audible lashings of the late ’90s and a tangible sense of drifting contemplation – that are both easy to relate to and immensely enjoyable to listen to… repeatedly. Debut full-length 90 In November is very much a product of place and person, careening down lanes both memorial and physical as it catalogues a vulnerable-yet-vibrant and poetically retrospective insight into the mind of Blair Howerton, the band’s point of origin.

The music video for the titular single was my first encounter with Why Bonnie and the lambent, guitar-driven glimmer pulled me in with very little resistance if I’m honest. That said, when I hit play on the album itself, the feedback-rich, distorted opening of “Sailor Mouth” caught me off guard momentarily. Still, those familiar components and that recognisable charm I encountered when I first crossed paths with Why Bonnie soon resurfaced, and I knew I was in for a memorable journey from here on out.

It’s possible to draw many musical comparisons here to illustrate the appeal of Why Bonnie‘s sound – a sound that fondly rekindled my memories of writing about Alaska Reid and Lightning Bug – but why lean on that? The Texan five-piece, and 90 In November by extension, stand easily on their own merit, peppering their dreamy rock tones with just the right amount of crunch. All of this is set beneath an indie veneer that complements the laid-back, ambling nature of their songwriting and musicianship.

As you’ll no doubt discover for yourself, Why Bonnie have a knack for writing melodies and phrasings (lyrical and instrumental) that settle in the memory with ease. Songs able to really permeate my often cluttered thinking space are rare: songs that do so on the first listen are few and far between indeed. However, Why Bonnie use their songwriting chops to great effect here, penning tracks that dwell in the mind’s recesses to be fondly recalled at random – the way certain songs we have an affinity for tend to. In the past week, moments of quiet have been frequently greeted by the melodious refraining patterns of “Galveston” and “90 In November”, as well as the lilting lead guitar and keys that wind throughout “Nowhere, LA”.

Despite being only a few minutes over the half-hour mark, 90 In November also feels the perfect length thanks to Why Bonnie‘s insistence on filling each second of the record with soul and sound. Nothing is rushed, and each of the ten tracks lives and breathes for the moment in which it exists (as well as the past moments and emotions that it recollects). This is done to wonderful effect in the little things: Kendall Powell’s keys frequently accentuate the shimmering chords and minimalistic lead guitars, lending a hazy optimism to songs like “Galveston” and “Superhero” while oozing a dusky, almost romantic appeal alongside Howerton’s tuneful delivery.

90 In November is far from a one-dimensional, outing, though. For every smile-inducing “Healthy”, there is a more soberingly reminiscent  “Hot Car” – tunes tinged with a nocturnal wistfulness that pours forth from the lulls and lingerings, aided by sombre synths and the veritable heartbeat of Josh Malett’s drum work. This continues in the record’s punchier tracks, too: “Sharp Turn” flirts with grunge, adding attitude to the fretwork of Sam Houdek and Chance Williams (on guitar and bass respectively) without forsaking the softer temperament that exists throughout the record. It’s tracks like these – the building fervour of “Lot’s Wife” as another prime example – that shift the often brightened demeanour of the album, like the visible greying of an otherwise white and fluffy cloud.

Essentially, Why Bonnie confidently navigate the balance between uplifting and melancholic everywhere you look and listen, musically and lyrically. They fuse the two into an anthemic collection of songs, which hits a sweet spot that feels… well, natural; this is undoubtedly the album’s greatest achievement. Amidst frequent thematic nods to life, location, and the links between the two, Why Bonnie choose to meet us in the middle – never landing too strongly on either side of the fence, but rather comfortably perched atop as they serenade us with their pensive sounds.

Whether you’re looking to settle down into the spotlight of its nostalgic clarity or head for the horizon with its appealing hooks bellowing in the background, 90 In November is a tremendous full-length debut. Why Bonnie have an impressive ability to capture everyday vibes in a melting pot of lovably authentic sound that adds extra to the otherwise ordinary – all without ever losing the relatability that makes it such an easy album to consume over and over again. It may be 90 In November, but for me this record is a 100 all year round.