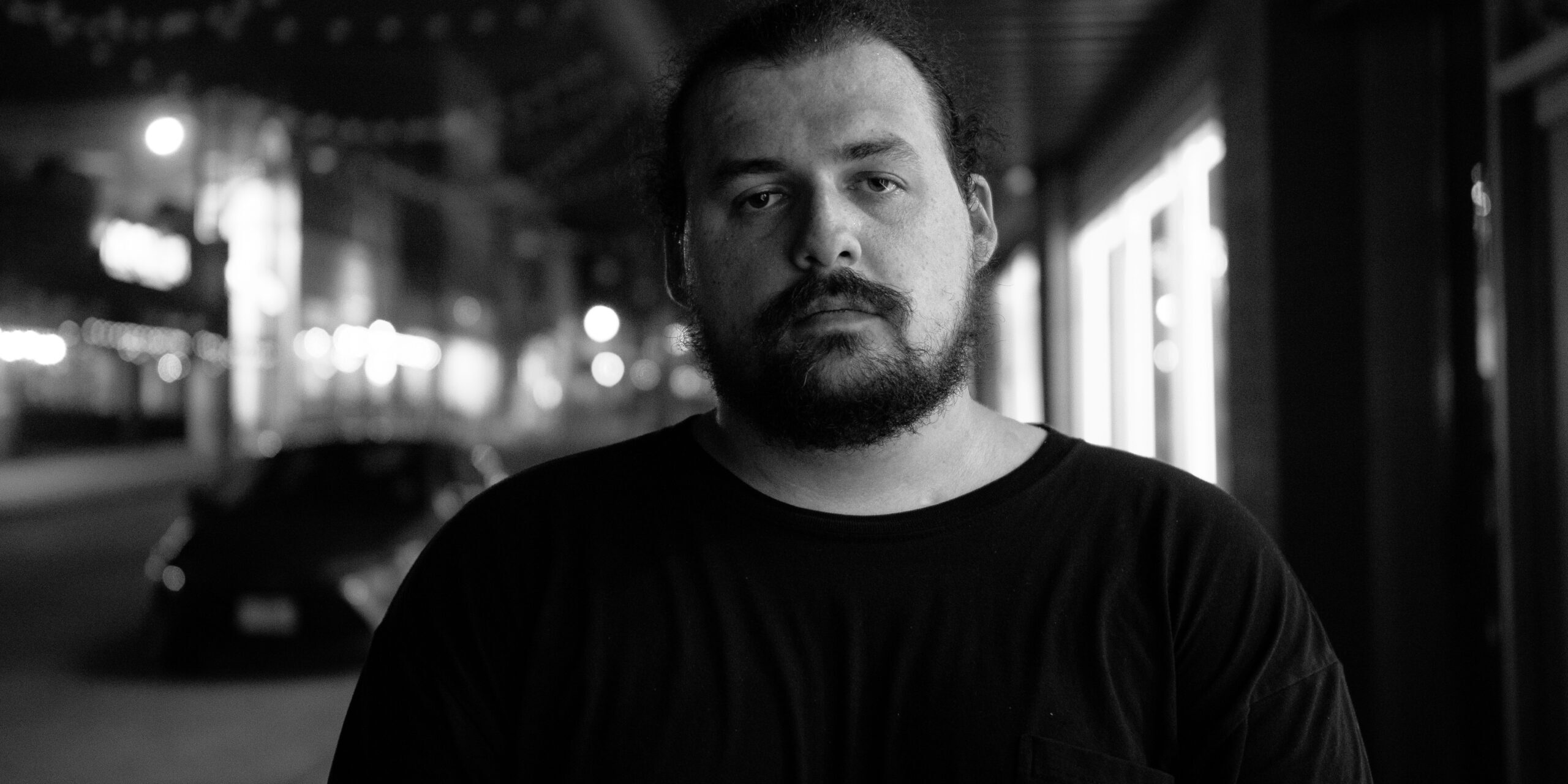 By David RodriguezApril 27, 2022 No Comments

GLOSSOLALIA is unknowable, much like the religious themes it plays with, practically reinventing The Chemical Mind with its violently abrasive take on experimentation and execution.

I’ve spoken a lot about expectations before – how some projects meet them and nothing more, others shatter them, and there’s always a few that unfortunately fall short. I try so hard to keep them in check regardless of who or what I’m diving into, but it’s hard to when you love a particular artist and you know they’re going to bring the heat. Luckily for me, I’m rarely wrong when it comes to that – my faves are my faves for a reason. Still, high expectations or not, nothing could prepare me for what I experienced here with The Chemical Mind.

The Chemical Mind took our entire site by storm back in 2019 with the release of Beneath the Shadow It Casts. I’ll direct you to my WFA article for details, suffice to say it was a wondrously whimsical and serene experience that balanced light and dark on its axis of avant-garde black metal atmosphere. With 2020’s That Benign Terror, things got more dissonant and darker – a lot darker – but showed a deft direction for the project’s sound that was unique. Two albums only and it became greatly respected among us – what would a third album yield?

GLOSSOLALIA – the word for the phenomenon of speaking in tongues or unknown languages, particularly during a religious or spiritual experience – is enigmatic. If you go into albums or art in general looking to suss out a correct interpretation, you’ll find this one particularly rigid and unyielding. I’m… still processing it all, and I’ve come to terms with the fact that no matter how well I explain my own reactions, thoughts, and opinions on this album in this review, I’m going to come up short. Perhaps I’m not quite ready to review it – maybe I will never be fully ready.

Throughout The Chemical Mind‘s life, it’s been the work of chiefly one person: multi-instrumentalist and composer Nick Krueger. He has had some help though, with some guest vocalists and instrumentalists helping with the project’s previous two albums in small, but meaningful ways. GLOSSOLALIA is unique in that it’s apparently all Krueger, and this plays into just how disparate the sound and themes are for this album compared to others.

I’ve put it off long enough – GLOSSOLALIA is a tough listen at first. It’s rigid and cacophonous; splintered on each edge to make handling uncomfortable, but not impossible. It’s aggressively synthetic, almost eschewing all previous organic and human elements in the music in favor of a frightfully cold and oppressive aesthetic. It’s like being trapped inside a computer world akin to Tron while it’s actively dying from a virus. This album is the soundtrack of aggravated erosion, utilizing noise, electronic, and industrial elements to hammer away at your perception and sanity. Sounds come in torrential waves, overwhelming at times and then barren enough during others in a way that’s very isolating and anxious.

Still, there is structure to it all. There’s discernable rhythms and melodies for growled vocals provided by Krueger themself to slither on top of. It’s noise, but noise with purpose; noise with structure, and it’s the only formative structure you get to lead you through this hellish maze of longing and torment that is GLOSSOLALIA. “QUAKING ASPEN” is abrupt and volcanic, yet it’s still very much a song – black metal as made by dilapidated machine, synth whines and moans flanked by splashy, glitchy percussion. There’s truly palatable moments on this album, and you won’t ever have to wait terribly long for the music to find its way again, but the moments become more and more infrequent as if cataloging the journey through a decaying world.

It’s like every cursing, caustic outburst rends just a bit more of GLOSSOLALIA‘s realm uninhabitable, tearing piece after piece away until you barely have enough room to exist. It’s supremely claustrophobic in the sense that you’re almost crushed by openness or voidal space. If “QUAKING ASPEN” proves to be difficult for you, then the cataclysmic climax of “THALASSOPHOBIA” will blast you across the room with its weighty punches of drums, not to mention the harrowing hellscapes of “DO NOT LOOK AT ME” or “MY HEART IS BEATING RAPIDLY”. Most songs deceive with up to a minute or so of rough, prodding ambience only to erupt into a startling wall of antagonism – headphone users, tread lightly your first go.

The themes of GLOSSOLALIA are numerous. The most obvious ones are biblical – glossolalia itself is one, Hebrew song titles like “ELOI ELOI LAMA SABACHTHANI” (‘my God, my God, why have you forsaken me?’) and “KODESH HAKODASHIM” (‘the Holy of Holies’), and the few lyrical references to heaven and cutting of black cloth (possibly a reference to the ancient Jewish tradition of Kriah). It all comes together with more to weave a story of terror in the face of a god or godlike entity, or perhaps a beckoning to be rescued from a terror levied by a god. Oceans are another recurring theme – song title “THALASSOPHOBIA” refers to the fear of oceans or large bodies of water – from which the main character is rescued at the end of the album, but not before supreme pain is rendered upon them. The ocean is metaphorical of course; for what is mostly up to you to decide.

After several listens, I read it all as a trans allegory. Throughout GLOSSOLALIA, lyrics reference bodies and the desire for a new one, yet still admiring and praising the flesh within (‘And isn’t my flesh so beautiful under the skin you’ve wrapped me in?‘). To me, the ocean represented dysmorphia, maybe even the societal pressure to present upon not only a rigid gender binary, but more importantly the gender you were assigned at birth. The character Krueger primarily sings as yearns to be blessed by God, to go to heaven and receive a new body unlike the one that ‘crawls and slithers along the ground‘; a new body detailed in a verse of “THERE IS NO INIQUITY IN ME” with references to “Song of Solomon“:

This, coupled with the dissonant nature of music, seems to create an atmosphere of suffering, writhing along the ground as you experience firsthand body horror. There’s despondent cries of ‘But where is my body?/I cannot feel my skin‘ in the same song, as if stripped of a corporeal form in order to be given a new one, something apparently promised later in “ELOI ELOI LAMA SABACHTHANI” with a very off-putting modulated voice representative of God, less majestic and calming and more ‘be not afraid’ realism that we can barely comprehend:

There’s also an acute personal, almost triggering reaction I have to these themes and lyrics thanks to my devout mother, who regularly tells me herself that all her health problems will be solved in heaven when she receives her new body, and how she wishes to no longer sin as a follower of Christ (‘I will never want/I will never touch the filth of sin‘). She’s no longer happy on this planet – all she sees is corruption and greed, and she just wants to go to the place she calls home, where she can see her grandparents again and friends that passed long ago. I see a similar desperation in her that I hear on GLOSSOLALIA, a longing to be pulled from the poisoned ocean of earthly living to a heavenly one. It adds a layer to an already complicated and dense thematic structure no matter how you look at it or what you believe.

After digesting this album a bit, I listened to each album from The Chemical Mind in order, back to back, at the suggestion of our PR manager, another big fan. It’s almost distressing to see how far it has come to get to this point. In three years, there’s been an immense exploration of human conditions and existence, gradually falling into murkier, endangering waters to build some of the most rewarding musical experiences I’ve ever heard. What started with a romp through the forests of the mind in Beneath the Shadow It Casts where sun could still be felt warmly on the skin and stability was all but ensured quickly turned to the dank subterranea of That Benign Terror, cloistered in darkness where the recesses become threatening and a feeling of malaise is prominent.

I fail to think of a referential place to compare GLOSSOLALIA to, probably because it doesn’t exist. This album feels like transcending realms, a purgatory that is acutely personal and lonely, which makes the fact that Nick Krueger did this whole album by himself this time hit harder. We all are trapped in our own oceans, some of our own making, others far our of our control – it’s up to us to find a way out of it before we drown, and maybe help someone else escape while we’re at it.

GLOSSOLALIA is absolutely dreadful – in terms of tone, not quality. It’s not going to be for everyone by nature of its execution, but for those that can endure, it’s an experience unlike most others. I truly believe you don’t come out on the other side of this album the same you were before. I’ve basked in extreme music for almost two decades now, always chasing that high of finding how far you can push your personal limits and what new zeniths of intensity you can unearth. Not much of that holds a candle to this because, while The Chemical Mind likely won’t be the most sonically extreme thing you hear in your time, it’s the most affecting, a full package deal of experimental presentation housing deeply pensive themes and stimulating execution. I can’t say enough good things about it, and hold it in the utmost regard I possibly can for a project like this. Until next time…