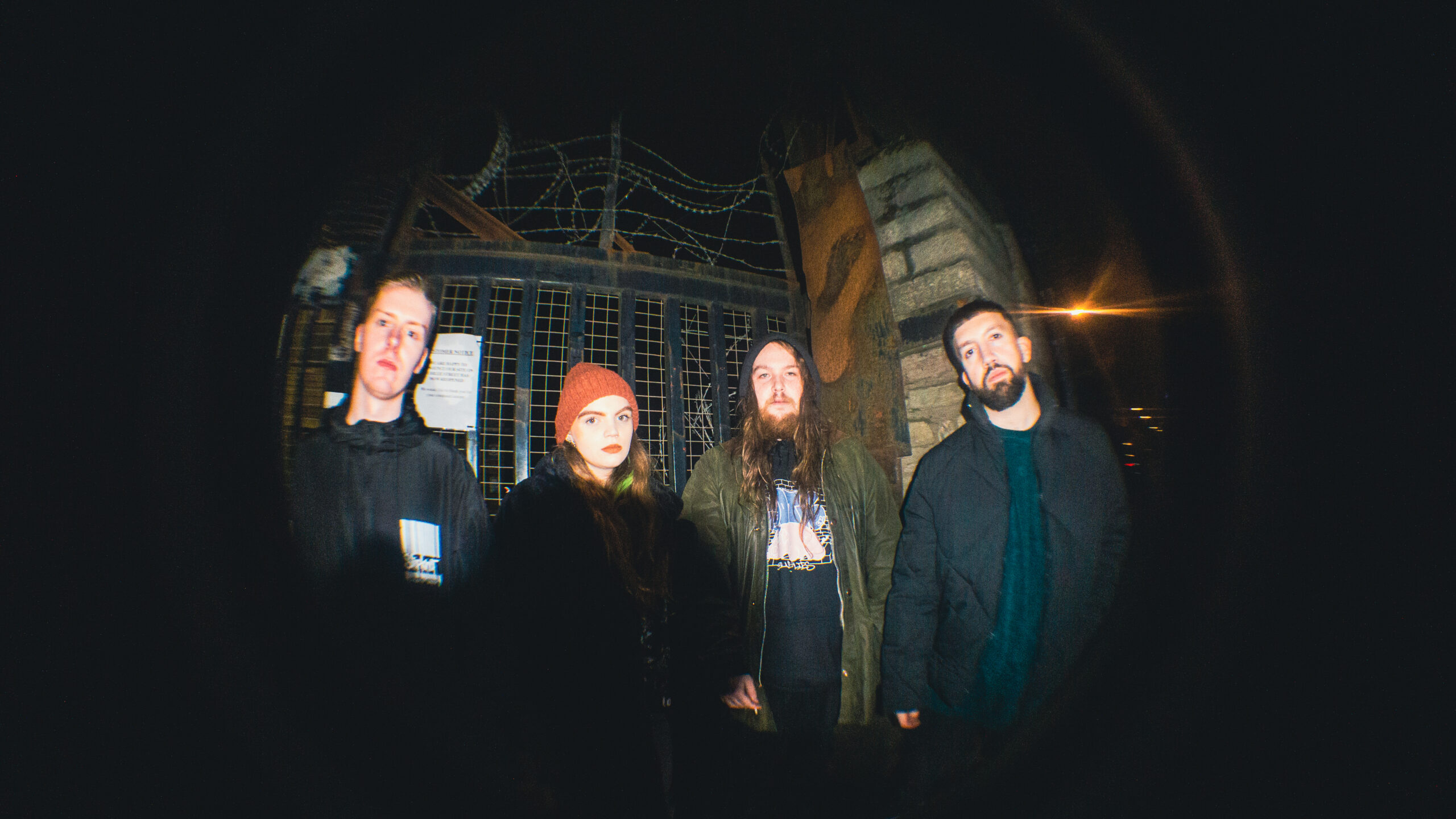 By David RodriguezApril 28, 2022 No Comments

You can’t spell Heriot without ‘riot’ and that’s what you get on this heavy, dense amalgamation of unforgiving musical styles with ambience and violence alike.

Man, look, genres don’t exist anymore, just styles, and even then that’s iffy. Everything is so fluid and on a spectrum these days, you’re very likely to see several influences and styles be referenced and adapted by tons of artists. To be devoted to a single sound in a straightforward fashion is becoming more of a rarity and therefore noteworthy in and of itself rather than the genre benders and blenders, yet we still give more attention to the latter as we should as they are almost always more interesting.

Such is the case with UK’s Heriot who have chosen to stick their arm out into the shelf of music’s style aisle and just sweep an array of selections into their cart, or trolley if we’re speaking the Queen’s English. What did they bring to the self-checkout register? Well, some hardcore, a little death metal, some industrial flavoring, dark ambient clusters, and an acidic attitude, all to make their latest EP, Profound Morality.

A look at the cover of this EP or the band’s social media will show a great devotion to this heat death orange-red aesthetic, almost like an infrared camera washed out and wiped with oil. It matches Heriot‘s grinding, mucky sound – music played at the edge of a world mid-cataclysm where the sun is replaced with nuclear bomb blasts and the only thing that could match the ferocity of the four-piece is the roar of that dying planet.

This economical ~20-minute EP is a hellraiser, sliced into digestible pieces that will either whet an appetite or fill just to the line of satisfaction. Either way, you may have a new favorite or a new band to keep an eye on – I know I do. From the dreary, humid atmosphere to the wringer of Heriot‘s blunt force aggression, Profound Morality is a whirlwind of steel and sound.

Songs like “Abaddon” and “Mutagen” set a good precedent for how heavy bands can, and should, complement their sundering noise with calmer sections that don’t fully betray the overall glum mood of these types of projects. You can feel it in the air at any given point, sensing that arresting weight and density along with the menacing throb of a machine that simply means to consume life. It’s dangerous and blinding, smoke and fog waging war with your eyes as you fight to keep them open and alert to threats, clear and unclear. “Abattoir” near the end of the EP is another shining example of bridging your explosive set pieces to one another with haunting, sunken soundscapes.

“Coalescence” on the other hand is a critical beatdown, stinging of vengeance and cloaked in pure wrath. Drums are ass-kickingly heavy both in their more organic and mechanical forms, guitars are serrated, and the vocals – two-fold here from Heriot – are as corrosive as they are throat-shredding. It’s the kind of music you hear and wonder how the hell anyone’s expected to survive when played in a live setting. It doesn’t relent with tracks like “Carmine (Fills the Hollow)” and “Enter the Flesh” either – both keep the momentum raging on as if sustained on righteous hate and adrenaline alone. Any moment, the instruments feel like weapons of mass destruction heaved in your general direction, the thundering from them making the ground you’re standing on feel paper-thin, prone to collapse and swallowing you whole if the wanton swinging of sonic bludgeons doesn’t collapse your corporeal form first. Cover your sensitive areas.

You get the best of both worlds on the title track which ends this EP. “Profound Morality” is monstrous, the longest track in the listing by a fair amount and hits just about all the notes previous tracks did. A fine summary of the record, but it’s more than that – it truly shows just how much attention Heriot have paid to making all the elements they play with meld together into this acrid, consuming sludge of a sound they’ve made. It’s slower too, which gives it a more prominent weight and feel than the rest of the songs. A doomed end for something that never promised to be anything but, but a hopeful and promising glint in the distance of a band with a lot of potential.

I’m quite impressed with Heriot here. Though I was initially surprised at how short this was (I thought it was more an LP-sized project at first – goes to show how much research I typically do before listening to new bands), it only made what was there hit harder. Less truly can be more, and it makes Profound Morality feel like a concise success of a story forged in the corners of hell and drudged up to seemingly punish us in the best way possible. Another Church Road winner; I can’t imagine this band not doing great things in the immediate future, provided we have one to soundtrack.