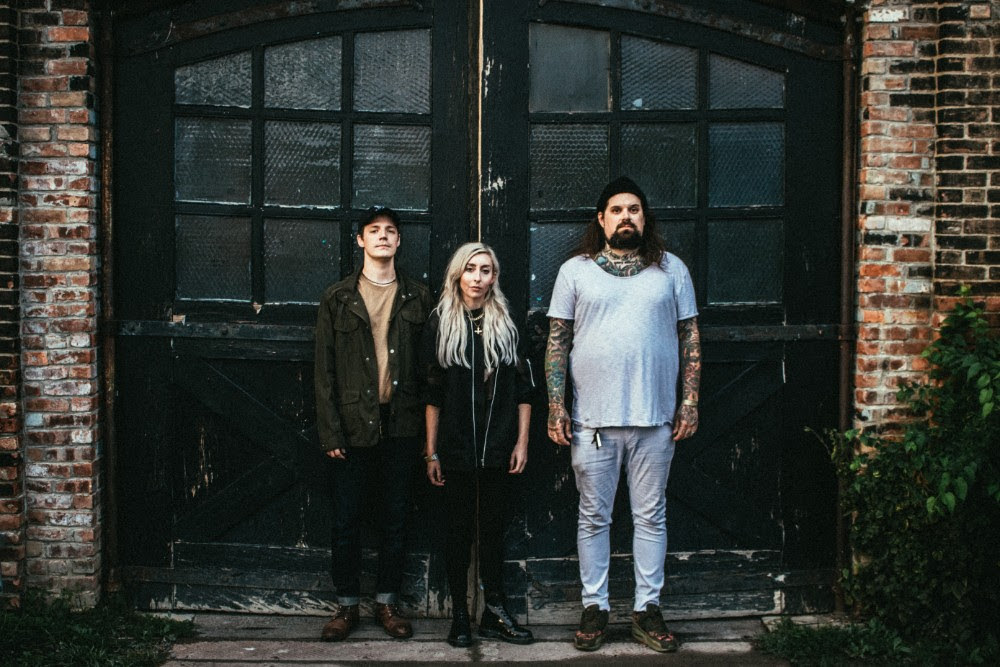 By David RodriguezFebruary 19, 2020 No Comments

Three juggernauts of dismal experimental music join forces to drag us all to hell in a new way. Prepare to be engulfed by blackness.

Sightless Pit is a cave in The Elder Scrolls V: Skyrim. Once you enter its depths, you’re forced to go forward through the many dangers it possesses if you want any hope of escape to the surface – no turning back. I bet you may have thought I was going to introduce the band here, but this ominously named location has a lot in common with our group of focus today. Sightless Pit, the band, makes music that is not easily escaped – you must push forward in order to leave unscathed. They’re comprised of The Body‘s Lee Buford, Full of Hell‘s Dylan Walker, and Lingua Ignota‘s Kristin Hayter. If you’re familiar with even one of these people or their bands, I think you know what’s in store.

Here we have three preeminent heavy music artists in league with uncompromising darkness itself. Each of them is accomplished and distinct in their own right, and they’ve banded together to make something still very much distinguishable from previous work. As thematically despairing as Full of Hell‘s music can be, or alienating The Body‘s songs can get, Sightless Pit is still a vomitous purge unlike the rest. You know… in a good way.

Crispy and throbbing production shakes the backbone of these tracks with anxiety and unease, though remaining reliable and steadfast in its tempo while Walker and Hayter trade off rasping and chanting vocals, distinctively and respectively. Each vocalists take the lead on specific tracks, rarely meshing together. This works in pacing the album out and likely to not give a listener too much tonal whiplash. There’s an undercurrent of static that pervades most songs, to me representing the crackling and crumbling of wellness itself. Eventually, the floor breaks and you’re left in a free fall into a pulsing void.

Hayter especially shines here – how could she not? She’s an absolutely fantastic singer that doesn’t cleanly fit into any typecasted role, except ‘really damn good‘. Her style is classically informed, almost baroque in execution, harnessing a clean yet corrupt beauty that I don’t really see many other places in any musical realm. Here, she’s comfortable being the voice speaking into the void, to cry out in woe to no one who will answer. The intro to “Kingscorpse” for example is oblique and bewitching, sounding like something from the NieR: Automata soundtrack. Overall, her pain is one conveyed with a quiet, calm desperation, complemented by Walker’s more upfront vitriol.

Walker’s terrible wretch is bellowed from the void, rather than into it. For all the forlorn souls that it has absorbed gives power to this harsh distillation of grief and sorrow, but one that still has some fight in it. This album may be titled Grave of a Dog, but the dog is yet to be slain. After hearing dense, harangued tracks like “Drunk on Marrow” and “Whom the Devil Long Sought to Strangle”, it’s easy to read this album as a story of survival and endurance – enduring the void, enduring malignancy in all its forms.

Upon multiple listens, I find that Grave of a Dog transcends mere collaboration. The trio have been colleagues, peers, and friends for a long while – it may be initially boggling to imagine them lightheartedly getting along given the brutality of their art, but what is darkness if you can’t plunge into it with some buddies? Not as much fun, I guess. Suffice it to say, Sightless Pit feels measured and worthy of its distinction from each member – less a supergroup and more a party of mutual misery.

This album is an example of music so unabashedly venomous that it transcends most explanation or description. It’s so diametrically opposed to any sort of decency or normalcy, fiendish and vaguely violent. Grave of a Dog experiments with abhorrence in a manner different from the parts of the sum to keep you guessing as to what will clatter upon your ears minutes – or even seconds – into the future. Tread lightly, for all that awaits you is consuming darkness in the Sightless Pit.