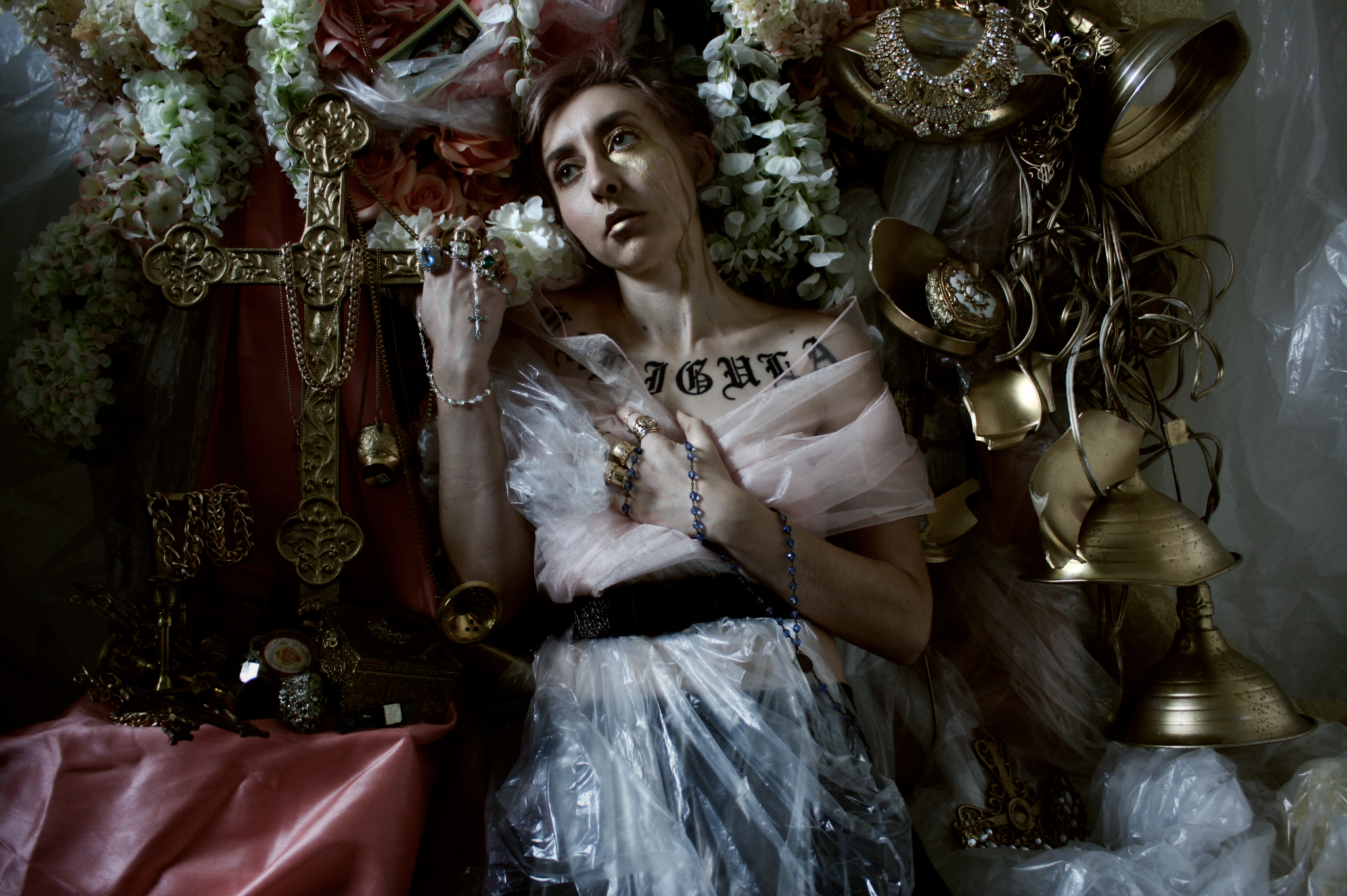 Lingua Ignota completely obliterates any potential expectations with CALIGULA, a multifaceted exploration of violence, survival, and retribution that’s both divine and depraved.

Lingua Ignota is not for the faint of heart. I don’t say this to be edgy, and I don’t want to oversell anything, but the fact of the matter is this music has a uniquely threatening aura that pretty much nothing else does. Kristin Hayter, the sole enigmatic person behind the project, occupies a space that no one else does in music. At least quite like this. She garnered great attention with her last project All Bitches Die, an abrasive, noisy, and subversive as hell exploration of violence and surviving it. It was really anyone’s guess as to what Hayter was going to do with CALIGULA, but I’m sure those privy to her work knew it would be anything but conventional or lighthearted.

To understand the tempest of violence and vitriol that CALIGULA practically bathes in is to understand the scarred soul of a survivor. Hayter makes very apparent her penchant for the utter sundering of abusers and corruption, on an individual level and perhaps even political (the album’s named after the infamous Roman emperor after all), made a deeply personal affair as she herself is a survivor of violence afflicted with PTSD.

Every single element is forged from blood, anxiety, pain, and just a tinge of fear. The lyrics repeat often within songs and across songs, fracturing Hayter’s voice more and more until it’s a shrill scream. The bass hits mimic intense, adrenaline-soaked heartbeats in places (“DO YOU DOUBT ME TRAITOR”), and absolute dejection indicative of a broken spirit with the help of isolating atmospheres and minor keys driven by pianos (“IF THE POISON DOESN’T TAKE YOU MY DOGS WILL” and many others).

There’s pretty heavy religious overtones throughout much of Lingua Ignota‘s music and CALIGULA is no different. There’s just a mood about it that seems to combine commanding piety and depravity in a way that I haven’t heard other bands do. One song might sound burdened by an assemblage of sin, sentenced to flog itself to repent. Another could lean into what I imagine a biblical exorcism would entail (“DAY OF TEARS AND MOURNING” easily comes to mind). Whichever method employed, you feel it. Songs give chills, they pull your lips agape, and can even make you wince with startling use of sound. Let’s dig into examples.

“BUTCHER OF THE WORLD” is truly mournful, rapidly descending into a place where Hayter can boldly use her voice to elicit a pain from deep within while strings and horns weave a melancholy web around her making for a real chamber music feel to it. This descent is felt more bluntly in the lyrics, the first of which are screamed (‘I’m the fucking deathdealer/ I’m the butcher of the world/ Rise up and I’ll cut you down’), but later are calmly cradled by a cleaner side to Hayter’s voice while retaining all the antipathy of before (‘May your own shame hang you/ May your dishonor drown you/ May there be no kindness‘). It is without a doubt Lingua Ignota‘s most tormented effort yet, mostly because it restrains itself in moments before breaking free into what you might expect her to do.

The sparse instrumentation is often lockstep with the vocals, matching the tone note for note in a way that’s so pervasive. “SPITE ALONG KEEPS ME ALOFT” is an entire mood in name alone, but what it accomplishes in harmony speaks louder than anything else. Piano notes are fingered lightly when Hayter’s voice is also light, but they strike harder to keep up with her loud projections and raspy screeches when the time calls for it. It’s something that gives the music a ballet-like elegance to it, even when it deal with its most depraved subjects. Raw beauty does find itself notched in elsewhere throughout the album, the most prevalent of which is undoubtedly “SORROW! SORROW! SORROW!”. Hayter’s singing is quite composed here; operatically tuned, the vocals dive deep to emulate the exact sorrow the song’s named after, but pierce the sky with highs high enough to reach heaven. 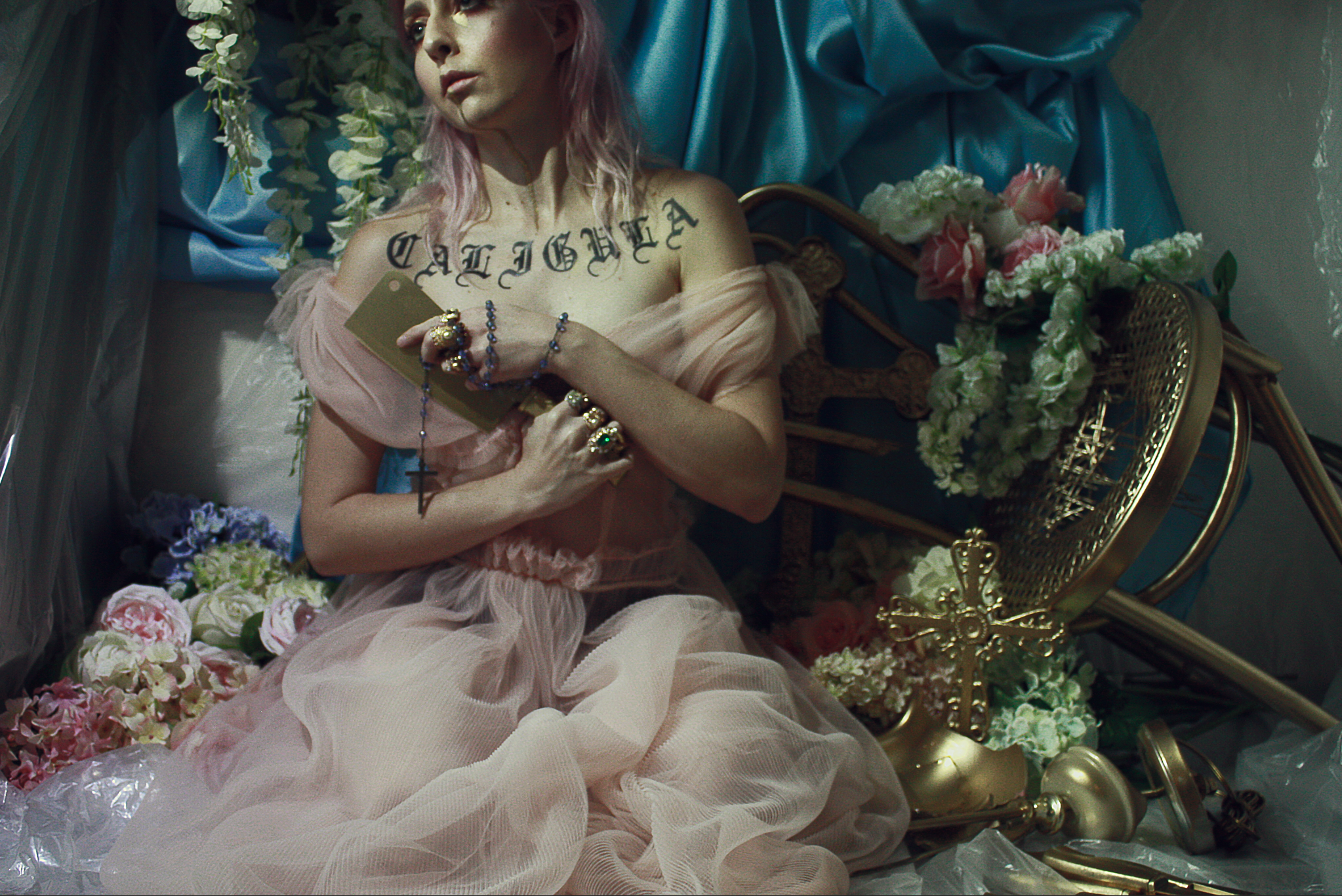 So much great music lately is finding its footing in pain. It’s a played out stereotype – arguably a very harmful one – to say that the best art comes from artist pain, but the good in this approach is having music for others in similar situations to relate to. So often are the abused, marginalized, wronged, and beaten silenced to the point of complete isolation and invalidation, or they have the narrative robbed of them entirely by the abusers in their lives. CALIGULA outright succeeds in wielding its emotional weight around like a medieval flail in the form of a grandiose and calculated revenge plot, and I don’t wish to cheapen its impact by calling it that. Rather, it should be celebrated that Lingua Ignota‘s form of violence is exact and radical, resentful of those that would take advantage of or dehumanize others. With as despicable and cruel of a villain as is portrayed through Hayter’s music, it’s impossible not to scream out in support of the protagonist whose story is deftly woven across eleven tracks of white-hot, hammer-pounded loathing.

To say that CALIGULA is the wolf that tears your throat out after you strike it down is too elementary, almost insulting of a description for the breadth of emotion and viscera that coats the album. No metaphor – pompous or simplistic – could embody the album’s massive entirety. Still, it does inhabit the tone of the music, just barely priming anyone interested enough to glance past Hayter’s opulent, gold adorned profile on the album cover and hit play. Lingua Ignota excels in distilling a very particular notion of the human spirit down to its raw pulp, bringing messy catharsis forward via story and sound in a way that’s genuinely unparalleled by contemporary artists. You won’t hear anything else like CALIGULA this year, period.