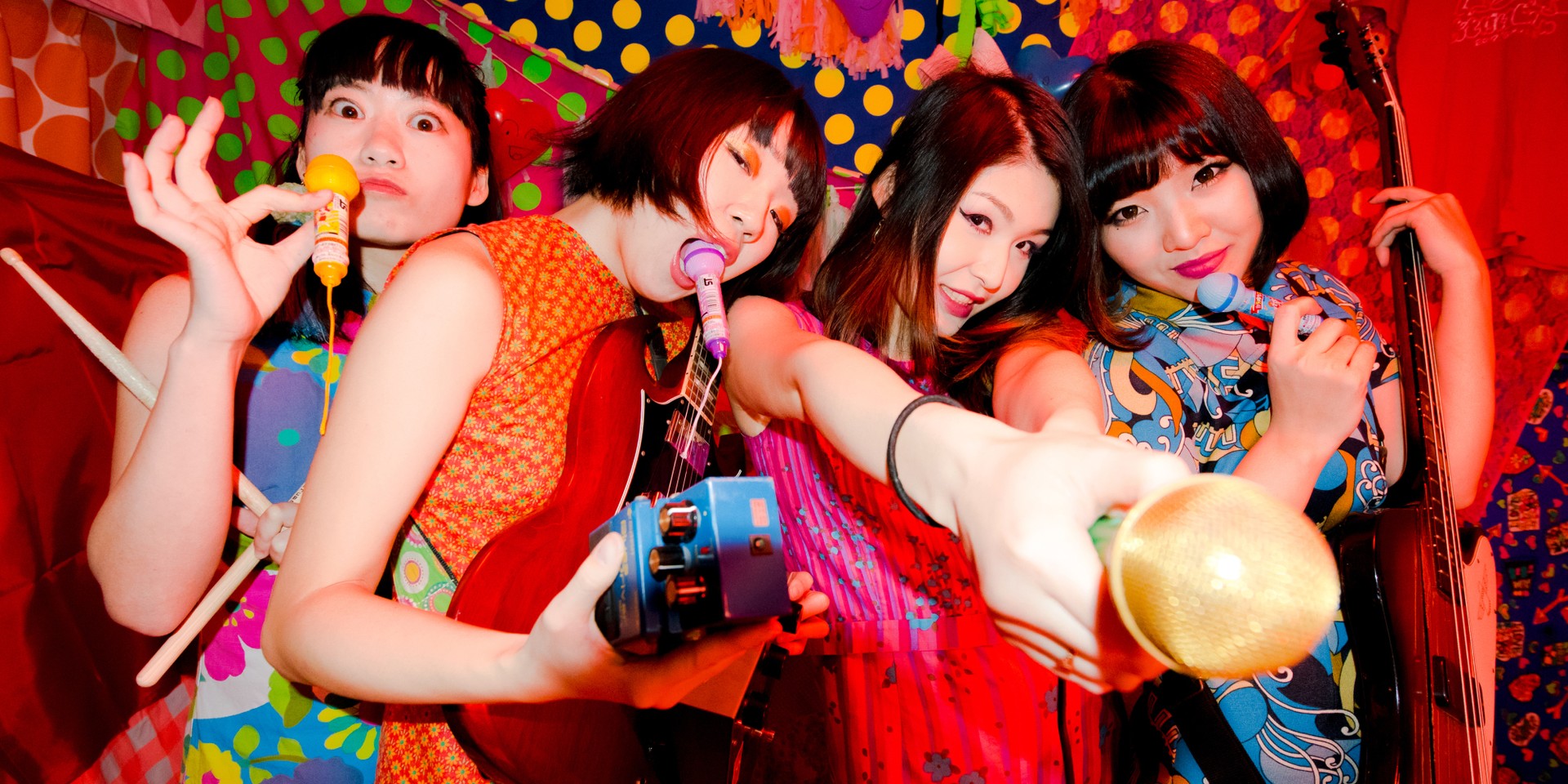 Otoboke Beaver aren’t slowing their controlled chaos punk rock down whatsoever, electing to instead lean harder into their sound to great effect with SUPER CHAMPON.

Three years ago, a Japanese rock band blew my entire shit up with their album ITEKOMA HITS. That band was Otoboke Beaver, a four-piece from Kyoto, comprised of all ladies and named after a love hotel in Osaka. Don’t get it twisted though, ain’t shit cute about their music – this is frenetic, unpredictable, punky garage rock that is so unbelievably clean and catchy, it’s since become an impregnable institution for me and a band I return to often when I need a little adrenal pick-me-up shot behind my ears.

To say that I was excited as hell to hear their new album SUPER CHAMPON in advance, let alone review it and tell y’all about it, is a bit of an understatement. ‘Champon’ is a Japanese noun meaning mixture, and ‘super’ is just about the only adjective I could see preceding a word like that in relation to Otoboke Beaver, though ‘hyper’ would be a close second. After having the record run through my skull several times (this thing is around 20 minutes despite having 18 tracks), it’s comforting to say that the band haven’t lost a single step. In fact, they’ve harnessed even more entropy than before to bounce off the walls in even more impressive and captivating ways, all while being more concise than ever and without losing the breadth of their music.

Listening to Otoboke Beaver is more of an event than most other bands. The energy is palpable and massively electric. The band aren’t political in the traditional sense, but still have a lot to say. Men are bothersome, love is complicated, and the societal pressures of being a woman are palpable and stressful. The anger and power that the band wield comes from everyday frustrations, thus making them endlessly relatable in the hometown hero way that there’s someone getting on a stage or recording in a booth saying what a lot of us wish we could without a care in the world.

If your Japanese is sharp, you’ll likely find yourself yelling along to various songs like “I am not maternal”, which is an absurdist knock at gender norms and the pressure for women to procreate. Favoring fur babies, vocalist Accorinrin seethes at the thought of having a child (loosely translated, ‘I immediately put it back in my belly‘), but relents at the idea of delivering a puppy instead of a human baby. This is all placed over tight instrumentation that always feels like it’s a hair – like that of a baby – away from falling completely off the rails. There’s a video for the song (above) charmingly (and skillfully!) drawn and animated by guitarist Yoyoyoshie, which puts some pretty funny and literal visuals to the whole thing. Welcome to Otoboke Beaver!

This is either a band that’s going to charm the pants and shirt off you, or be rather off-putting with their lyrical repetition and distaste for staying in the same lane for too long. Frequently, in the same song even, you’ll hear them kick themselves into different tempos and time signatures at a moment’s notice. Comfort isn’t necessarily Otoboke Beaver‘s strong suit, but that’s why I like them so much. It’s like the most saccharine whiplash possible, rhythms shifting at near-inhuman amounts, melodies morphing to fit these structural changes, and all along the entire band is screaming gang vocals, never losing a damn beat. They are the embodiment of those ‘never let them know your next move‘ memes going around lately.

To that end, I must shout out drummer Kahokiss and bassist Hiro-Chan, who work overtime to make sure things are going as intended and against all laws of physics. Songs like “I won’t dish out salads” really show the chemistry that the two have and their sheer dedication in keeping that rhythm section as unassailable as possible. Bass is always audible and flying every which way while drums treat tempo as a mere suggestion, going from traditional rock fills to explosive thrash-influenced climaxes all within the span of a minute or so. And that double bass drum flourish at the end of “I checked your cellphone”? Exquisite half-second of sound. I’d love to witness their songwriting sessions, though I’d likely need protective gear. The groundwork for several songs exist within one oftentimes and it’s absolutely intriguing to hear the band blast through it all with masterful precision – it’s something else entirely to watch them do it live and without the blemish-concealing power of studio production. Otoboke Beaver are the real deal.

One time, someone in the comment section of a video of theirs said something to the effect of ‘Don’t use English if you’re not going to use it well‘, which is… wow, so racist. But, if one good thing came of it, it was influencing “PARDON?”, a sarcastic diatribe against any and everyone who talks down to non-native English speakers with some incendiary, matter-of-fact lyrics. The video is actually inclusive and a nod to fans around the world though, the lyrics displayed in various languages for as many people as possible to understand. Accorinrin’s refrain of ‘pardon‘ and ‘shut up!‘ becomes very percussive near the end, the drums lockstep with her voice to punctuate.

Otoboke Beaver‘s lyrics almost become incantations against the daily annoyances of life, their instrumentation the mana needed to make it all affective to begin with. Even the song titles alone, often not strictly translated, are sources of smiles and knowing nods – “Leave me alone! No, stay with me!” is a favorite, along with “You’re no hero shut up fuck you man-whore” and the now classic “Dirty old fart is waiting for my reaction”. They’re just such a likable group of musicians and people (look up nearly any interview to see them at their most wholesome and relatable), fiery and keen to tell you like it is, and you’ll enjoy every minute of it… I hope.

I won’t go on a savior-of-rock-or-punk rant – we’ve had enough of that recently – but bands like Otoboke Beaver existing makes me wonder how the hell people out there are lamenting the death(s) of those genres without even so much as a listen to bands doing the sound in a wildly unique way and doing it well. I get it – you can’t listen to and know everything – but that concession alone should be enough to deter such claims (alas…). So, this whole review is me telling you to listen to this band. Feel the energy, bathe in the sardonic writing, and understand where they’re coming from despite a language barrier. I can’t think of another band in this realm better suited for your attention at this time, and if the quartet keep this up, it’ll stay that way for years to come.