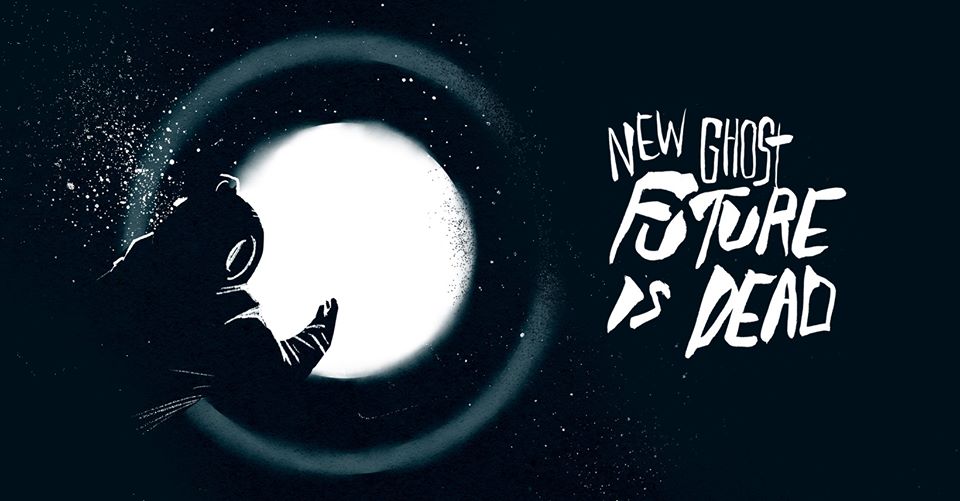 This short but welcome EP from New Ghost showcases many facets of this fluid and adaptive band, with all three songs being calming and powerful, just like their debut.

One of the best parts of my journey here at Everything Is Noise is seeing new bands put out fantastic debuts and ride that wave to release more music not long after. New Ghost are one such band; they released an album last year, which encompassed progressive- and post-rock, blended with shoegaze, indie and electronic influences. It blew me away! Along with reviewing New Ghost Orchestra, I also got a chance to interview Chris Anderson – the lead musician of New Ghost – and hear about his plans for the future. Well, some of those plans have been realised in their latest EP, Future Is Dead. This three-track delight is a perfect introduction to the sound of the band, shifting from shoegazey beginnings to a prog-heavy ending, with each track having unique vocals to boot.

As a quick recap, New Ghost hail from the UK, specifically the area around Sheffield. Anderson leads the band, bringing in friends and other local musicians to create the unit we hear before us. This adaptive approach means songs differ drastically but complement each other very well. Using vocal duets and electronic sounds to maximum effect, New Ghost‘s debut was beyond exciting, and I’m pleased to say they have done it again with this new EP. On a first take, the biggest thing that became obvious to me was that the sound quality has improved, which is always a sign of a band being able to find their comfort zone and build that carefree atmosphere. The next was that the drums have also improved. Taz Ali from AWOOGA put his sticks on record this time, and the difference really shows. The deep and powerful drums help to build even more atmosphere and groove into the music.

One of the strongest performances on New Ghost Orchestra was from Caroline Cawley, who brought a voice that portrayed multiple emotions at once. Returning for all three tracks this time around, her voice sounds mysterious, forlorn, and hopeful all at once, contrasting or amplifying the music around her. Each track features great duets with Anderson, their voices pairing brilliantly together in a way that reminded me of Pure Reason Revolution, who I also checked out earlier this year.

Despite the EP’s release in the midst of a British summer, opening track “Your Reds” reminds me of spring, Ali’s drums creating images of growth and the twinkling synths representing the crisp, cool air. The track escalates from a blissful state into a post-rock and shoegaze climax, with listeners able to really grasp the quality of Ali’s drumming as the track closes off. As soon as the raucous climax of “Your Reds” ends, you’re met with a completely different sonic palette on “Fountain”. This track dials it in just right, a great combination of styles taken from two tracks off their debut last year, using electronic music behind beautiful vocals.

Anderson mentions in a PR piece about the record that he was looking for the EP to be something that people can lose themselves in over and over again, him drawing inspiration from bands like Mogwai and The Mars Volta. I’m sure we’ve all got short-play records that we constantly dip back into and I feel that thanks to the ever-changing styles on Future Is Dead, this one will join those ranks. The final track gets really proggy, sending the listener to space with psychedelic guitars and synthesizers after a cool alternative rock introduction. You’ll gain a huge appreciation for the mix when listening on headphones, the dynamic sounds coming from the instruments bouncing around your head, the vocals as infectious as the spacey synths.

What more can I say? This is a great EP, New Ghost succeeding in developing their sound whilst also creating a short-play that can be revisited time and time again. As you’d expect from artists who push the limits of their sound, the whole package is fantastic, the album art being one of my favourites pieces of the year so far. Future Is Dead is an EP that any fans of Oceansize, shoegaze, and prog rock should get a load of because of its ever-changing sonic landscapes and brilliant vocals. The only criticism you can weigh against it is that there isn’t enough of the damn music!