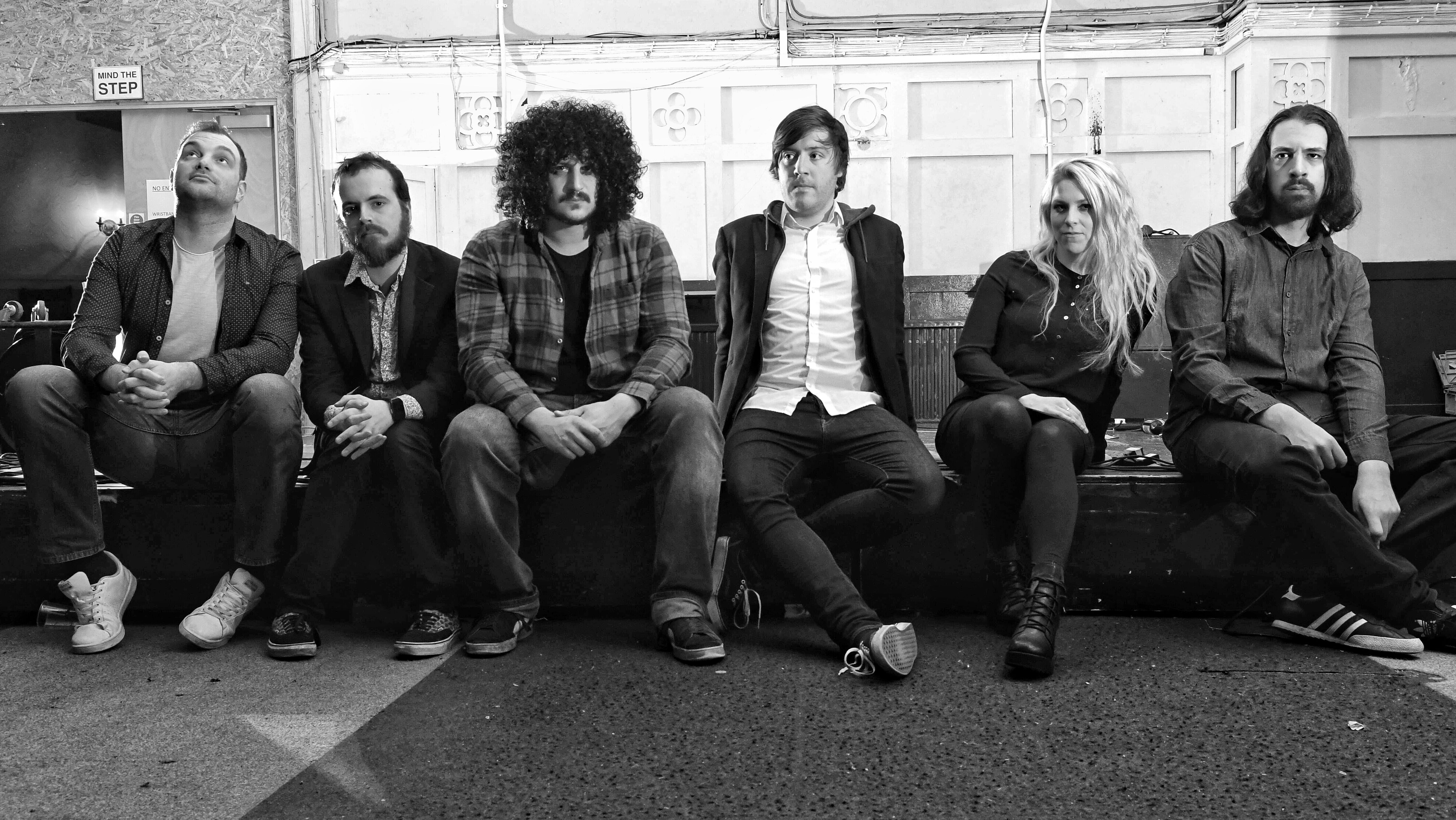 On July 12 of this year, New Ghost burst onto the scene, dropping an exceptionally beautiful collection of songs called New Ghost Orchestra upon us. This exciting UK-based band blew us away with the record, as you can see in our review. Everything Is Noise also listed it as one of our albums of the month for July! So what could be better than to make them our Weekly Featured Artist and get to know them a bit better? We spoke with Chris Anderson, founder of the collective, on topics ranging from how they met to how their debut live show went. We also touched on their sound and what is next for the band, possibly even including some news on a tour date later in the article…

First things first: we asked Anderson about how the album had been received, and where the band’s energy was being exercised over this (mostly) lovely summer. The good news is, the reaction elsewhere to New Ghost Orchestra was the same as ours, with deep and articulate reviews flying in from all angles, as well as individual messages sent to the band, supporting the release. For Chris, this has been a huge boost.

‘It has been so encouraging to see the material connect with people, which is always ultimately the goal – to find that connection. I wasn’t sure I’d put anything else out ever again, so even though we’re in the very early stages of the project, to have this response really has been gratifying and humbling.’

The band have since focused their energy on bringing the album to the live setting, playing their debut show just after the album launch and much more as you’ll find out as we progress through this feature.

One of the most important stories to tell is how such a collective forms. Anderson gave me an in-depth history of the band, painting a picture of how a group comprised of many members from many bands comes together to push out such a unique record.

As with a lot of art, the origins of New Ghost were seeped in the frustrations of not actually creating. That same feeling leads to apathy or disinterest towards the project from some people, and it was a situation Anderson found himself in a few years back with a previous band, Firesuite. Not being able to create the music he intended to, seeing the band slowly move onto other things – it was a dark time creatively, and yet he dilligently continued his work at Old Pig Farm Studios in Sheffield, UK nonetheless. During a boozy late night session at the studio as it was all coming to a head with Firesuite, John Sephton, owner of the studio, joked that if the band didn’t record the album, then he would. This gave Anderson a breath of fresh air, and he set to work fleshing out the demos he’d been recording.

Sheffield is a melting pot of bands, so the next step of forming the collective was thankfully easier than it would’ve been in other regions of the UK. Anderson enlisted the help of Arian Malekpour, who he knew from one of the bands he had played with in the past. Malekpour is a lynchpin of Sheffield’s music scene; before long, he had enlisted the help of three new members for New Ghost, who were all as enthusiastic as Anderson about the project. From there, Anderson set to task on recruiting vocalists for the intended vocal tracks, pulling in Caroline Cawley from Church Of The Cosmic Skull and Craig B from Aerogramme. The latter’s feature particularly excited him.

‘I’d worshipped everything he’d been involved with for years, and he was one of the main reasons I played music to begin with, so I built up the courage over the period of about a year (again the introvert) to asked him to come throw his voice at something. He agreed, and what was perhaps the most surreal moment in my musical life he came and sang on a song I wrote. That song (“Hours”) had become a cornerstone in the material we had. It was the song that had convinced the majority of the band to want to get involved, so seeing it brought to life by one of my musical heroes was…a lot.‘

New Ghost Orchestra was recorded quickly, with Sephton stepping in on drums and driving the band to completion. They sat on the record for a while after completing it, thinking of how to present it to the world. With such an enveloping soundscape, it makes sense to gift it to audiences live as well as on record, so they set about working on their live show. Despite all the positive momentum, Anderson felt worried that the music wouldn’t actually see the light of day, and that is how the name was coined.

‘During the writing and recording, I couldn’t shake this idea of the ‘ephemera’. In that what we were making could feasibly not see the light of day, and that the project was just another ‘new ghost’. A romantic notion in building something as big and powerful as you can, to see it then dissolve away just as quickly as it had materialised.‘

And so New Ghost had a name and an album.

As mentioned earlier, New Ghost Orchestra is a smorgasbord of styles. Anderson wrote all of the songs by himself, except for the experimental electronic song “Sleepwalkers”, which was written by Sephton. Anderson set out to create an album which sounded like a radio station playing all of your favourite bands, so the fluidity of sounds came naturally to the album from the onset. Influences from throughout his life were injected, ranging from noisy grunge to lush alt-pop, as well as input from the other members. Some songs took on completely different sonic properties than their original incarnations, with Nic Bowden and Gareth Hughes stripping out the acoustic guitar and mandolin on “Nightdrive” and playing it on fuzzy synths instead, completely changing the mood and atmosphere of the song.

Citing influences such as Deftones, Mitski, St. Vincent, and Mew, you may understand why the album feels so warm, yet also steeped in deep emotion. Another key factor to this was the high quality work from Sephton and Steve Goodison who produced the album. Anderson rightfully describes the atmosphere as having a warm sheen to it that keeps the listener coming back for more.

Two tracks that were particular labours of love for him were “Hours” and “Stampy”. The former is particularly important to him, not only due to the amount of time put into the song from a writing perspective, but also given how much its message resonates with Anderson and the other members of the band, who are massive cheerleaders for it. When all the pieces finally fell into place, he descirbes it as a real ‘moment to remember‘.

The second song is about the passing of a friend. After fleshing out an acoustic demo he’d found on his phone, “Stampy” was born.

‘I wanted to send this individual off with their own viking funeral, arrows flying through the air aurally speaking. It’s a huge moment on the record, and an explosive moment live. We rehearsed this a LOT on the run up to our debut live show, we knew we absolutely had to deliver an emotionally resonant moment live with this, I think (and hope) we did.’

The bands first live show on July 21, 2019 was a beautiful event according to the band. Despite John moving out of the country, Malekpour was able to recruit Taran Ali from AWOOGA to lend his expertise to the live show. Having caught the man perform with said group, I can tell without having seen them live that this is an exciting development for New Ghost. Luckily for them, when they got to rehearsals, they found their chemistry outside of the studio setting was great, and they set to work learning their material over the course of seven months.

They curated the event at Tramlines, a small in-city festival, bringing in bands like Waking Aida and Codes In The Clouds to support them. Despite having a lot to prove, New Ghost felt they held their own amongst the other performers, and pulled the show off impeccably.

So we asked, will they be out on the road more this year? Whilst they are slightly tied down to the other members’ schedules (bands and work), they can exclusively announce that they have their next date set for Spielbergs‘ show in Sheffield on September 23rd! They are really excited to play with them, and expose their music to a whole new audience. Apart from that, they are working on shows for later this year or early 2020, so make sure to keep an eye on their social media.

With the arrival of Ali came increased activity on the writing front. Whilst rehearsing for the live show this year, New Ghost have also been composing new material.

‘After the performance and the euphoria that follows, comes the inevitable comedown, and with it a vacuum. In an effort to combat that comedown I threw myself into writing more music.‘

With another EP’s worth of material in the bank, New Ghost are still hard at work. Direction-wise, Anderson says he is looking to push the boundaries of the New Ghost sound.

‘The new recordings have a different vibe. If New Ghost Orchestra is a radio station from a half-remembered dream, the new recordings are a residency at Club Silencio, with a wall of roaring amps and blissed out synths.‘

I for one like the sound of that, and expect the band to build an exceptional discography in the years to come. The project sounds like it can grow, adapt and change, not limited by overpowering influences or sonic limitations. Being based in such a creative hub, we might see more additions and changes to the band’s line-up, and hopefully more and more live shows as time goes on!

We hope you’ve enjoyed getting to know New Ghost, and we most certainly hope you enjoy their debut album New Ghost Orchestra! Their social media and purchase links are at the bottom of the page; make sure to keep an eye out for those promised live shows. Anderson had this to say to all the readers who’ve made it this far:

‘I just wanted to take a moment to thank everyone who has already listened to the album, and for Everything Is Noise for giving us this platform to share it. We are incredibly appreciative of the opportunity to talk about the music and what it means to us. I think I mentioned previously, but the goal is always connection. That is why we do this. There is a unique power in creating something and to have it move someone somewhere. I absolutely adore writing and recording music, it is always done with love and care, and I really hope people get something out of it.‘