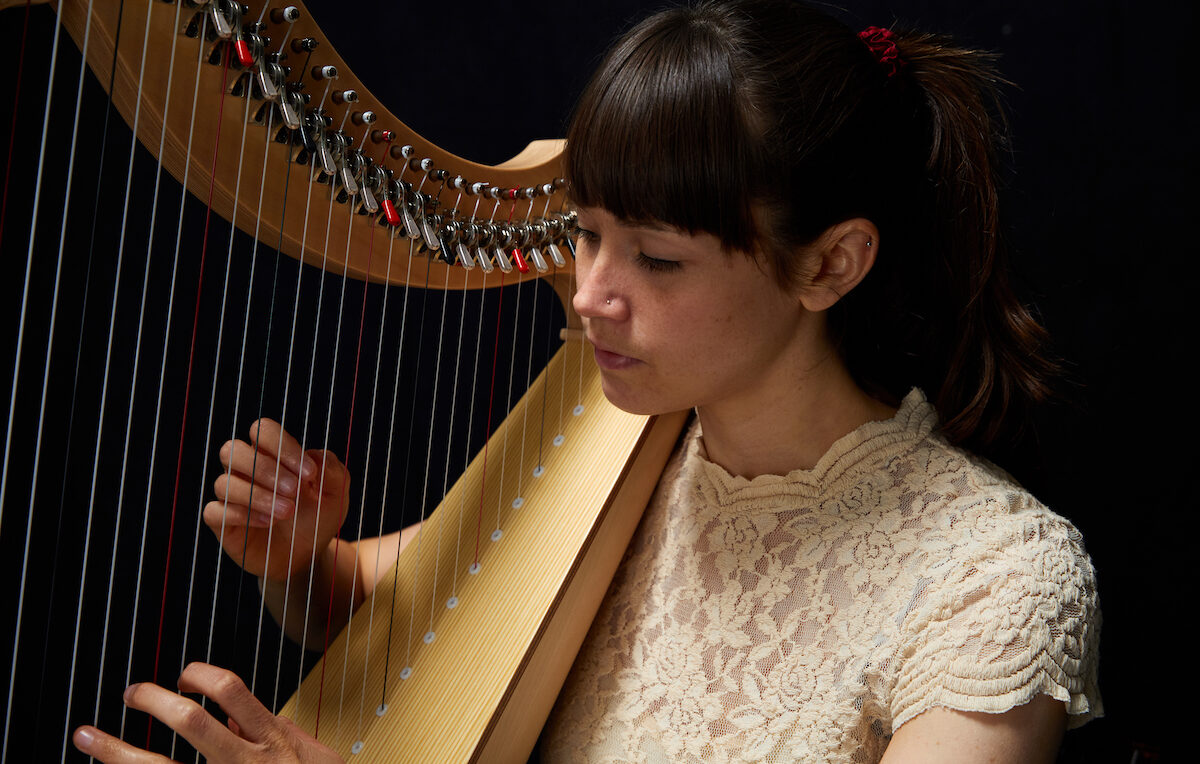 With Movements, UK singer-songwriter Natalie Evans continues her success story by expanding upon the unique qualities of her musical identity.

For transparency’s sake, let me say this much: I’ve been waiting for a new album from Natalie Evans since the last note of 2018’s Better At Night rang out on my first listen. Hyperbole? Maybe. Sincere confession of admiration? 100%. Her take on math rock-informed acoustic folk floored me from the very beginning, and the way she courageously ended on a trio of neoclassical pieces impressed me, both conceptually and musically. Perhaps owing to her being a charming singer as well as an accomplished self-taught multi-instrumentalist (she plays guitar, piano, and the harp), Evans’ compositions on her début full-length were multifaceted enough to belie her status as a relative newcomer. Comparisons to eclectic greats like Joanna Newsom were quickly drawn upon her arrival on the scene – in terms of premature praise, that’s probably as high as it gets.

We’re four years removed from the release of Better At Night at this point; the world around us has changed – for the better and (depending on your perspective, much rather) for the worse – just as much as we ourselves have, as individuals and a community. Will Evans’ quirky folk pop find the same resonance under these new circumstances? How has she herself experienced and materialized this change? And does she, through her work, even have to contend with any of this? Well, only time will tell for question number one; number two we’ll get to in a little bit. As for question number three, well, the answer would be no – art can’t and shouldn’t be forced to interact with the demands of its audience or the whims of an ever-changing environment. In any case, let’s see what Natalie Evans has been up to since 2018.

To gently shove the garish elephant out of the room, yes, of course the pandemic has had an effect on Evans’ life and her creative process. That much becomes clear upon interaction with the double A-side single she released back in March, “To Go On”/”Sun Song”. As our first taste of what’s to come with Movements, these two songs are inextricably linked to her personal experience of ‘living la vida lockdown’, as they say. Apparently, the turmoil of coming to grips with this new reality while trying to remain hopeful has initially left her with a rather unbalanced batch of recording, which she then had to consciously set straight.

‘When I was first putting songs together for the new release I had a lot of sad songs and I felt like an important part of me was missing from it. So I later added some songs to express that happy and fun side of myself. “To Go On” is one of those songs. The song is about having time away from the outside world and hiding away for a bit, and then having lots of vivid daydreams that eventually make me miss everything and want to go back out again. It goes through the whole process of resting, then gradually starting to feel better until I’m really happy, refreshed and energised.’

You can actually hear all of this within the song. There’s still some residual gloom, but through its bright, reassuring music, “To Go On” captures the eventual optimism of Evans’ lyrics quite poetically. “Sun Song” on the other hand is just pure bottled sunshine, if the title alone wasn’t enough to give that much away. Weaving her talents as a harpist into an airy neoclassical context, this track works around field recordings of actual waves beautifully. Topped off with Evans’ delightful voice, this one’s an immediate highlight on Movements. The inspiration behind it is rather obvious, but I’ll let the artist speak for herself:

‘”Sun Song” is about a beach trip I took during the summer of 2020 when most places were still closed and I was staying at my parents’ house in Medway. With the pandemic happening I felt so in need of something new to do, so I drove to Whitstable beach and walked around listening to music. I went in the sea and recorded the waves which you can hear at the start of the song. I felt incredibly free that day.’

It’s not all pandemic-induced doom and gloom whenever it gets personal on Movements, though. Sometimes, like on the sparse, piano-driven “Driving Home Late”, it’s about the feeling of being at home, uncertainty, and moving to a new city. Prompted by Evans’ own move to London, this song is a surprising start to the album, but a very welcome one as such. It has a certain air of spontaneity to it, which makes a lot of sense given that Evans ‘wrote most of this song in one evening […], when I started laying down these simple piano chords and singing over them.’ The prevalence of the piano, meanwhile, foreshadows a heightened focus on her classical influences this time around.

So, to finally answer question number two from earlier, Evans has taken the changes that occurred in her own life and let them carefully seep into Movements while preserving some of the idiosyncrasies that made Better At Night such a hit for me and many others four years ago. Among this collection of 12 songs, which includes two instrumentals, only five go over the three-minute mark; Evans’ compositions are still as brisk and unburdened as ever, which I appreciate. A new set of influences, among them Moses Sumney, The Japanese House, and Peter Broderick, has inevitably left a mark on her songwriting, though – all but gone is the slight nervous energy Evans inherited from her math rock heroes TTNG on Better At Night, for example.

As someone who unabashedly liked her previous inclusion of (neo-)classical elements, I am overjoyed to see Evans leaning more heavily into that direction with her new material. Not only is Movements bookended by two beautiful piano ballads in “Driving Home Late” and “Guest Room”, the latter of which doesn’t even feature any percussion, it also contains many moments where it becomes obvious that Evans wanted to take a different route with this batch of material. Especially the harp is getting even more love (just listen to “Movie”, “When You Leave”, or the aforementioned “Sun Song”) here, which is a sure-fire way to win my heart – I love that instrument to bits. These classical moments often come in the form of complete standalone songs, but they also pop up in the more folksy numbers, as if to tie a neat stylistic ribbon around the album as a whole.

That’s not to say that the Natalie Evans we hear on Movements is completely different from the one we last heard in 2018. The album bears her unmistakable fingerprints on every single note that’s being played, and her songwriting is still fully recognizable even with the changes she made to the overall formula. Listening to “Between the Ground and Sky”, “Pencil Drawn”, or “Colours Fade” will undoubtedly quell any potential fears of Movements being too much of a deviation for Evans’ fanbase to digest in an instant, as these songs carry over that same lovable Better At Night sound we all fell for. The measured updates she’s implemented just add to her music’s pre-existing charm, and I find it hard to believe that anyone could be dissatisfied with the outcome.

My personal favorite track on here would be number eight, “Under the Moon”, which sounds like a soothing music box lullaby, consisting only of harp and vocals. It gives me the same warm, fuzzy feeling “Rooftops” did when I was gearing  up to review Movements’ predecessor. Listening to it for the first few times reassured me in my impression that Natalie Evans had struck proverbial gold once again. This is exactly the kind of follow-up I had hoped to see from her. It does away with anything that might’ve held her back as an artist (which wasn’t much to begin with) and instead doubles down on everything that made her début leave such a lasting impression. I for one am absolutely smitten with this little gem of a record; hopefully, you will be too.