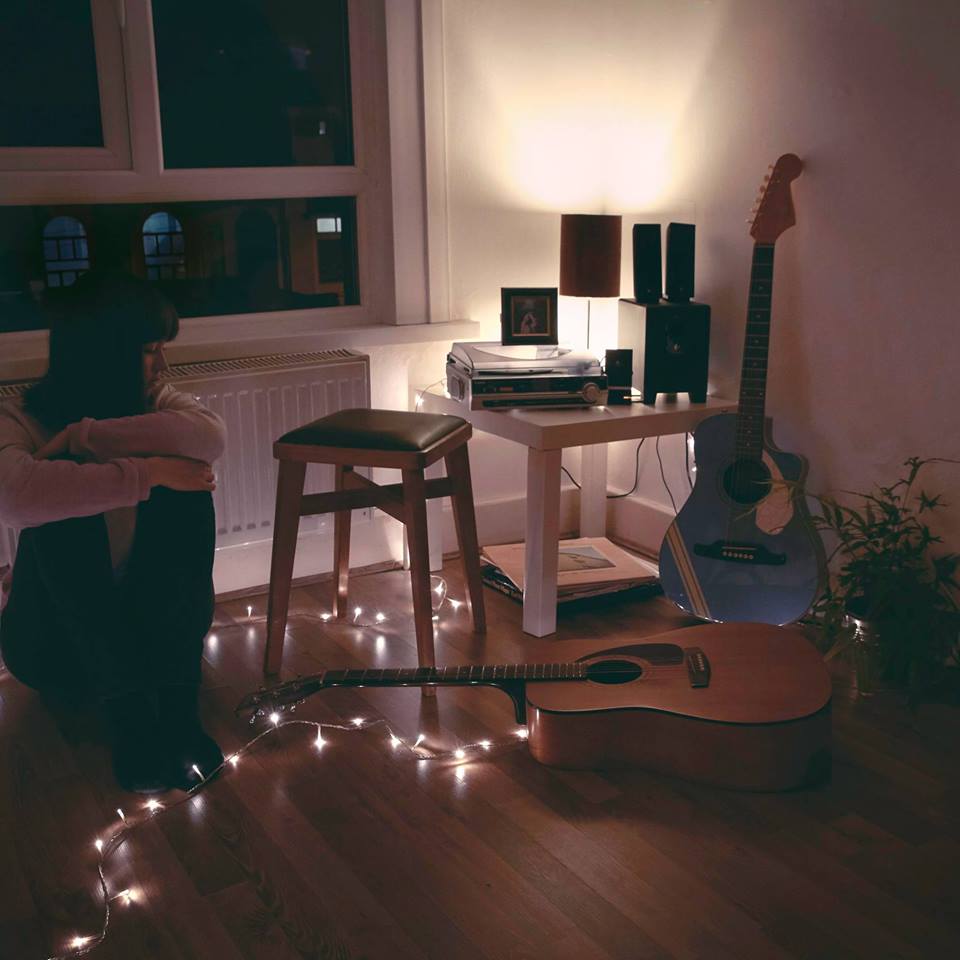 Virtuosity and vulnerability walk hand in hand on Natalie Evans‘ beautiful new album Better At Night, with neither overpowering the other at any given moment.

‘I enjoy pairing catchy, pop-sounding lyrics with more complicated guitar; it creates a sound that I find really fun. I think the style of guitar I play comes from listening to emo and math rock in my late teens, but even before then I loved learning fingerpicking songs that used alternate tunings. I also enjoy the technical aspect of writing music that I find difficult to play. I like to challenge myself.’

To be honest, I could just leave you with the above quote by Natalie Evans herself, and you’d still have a general idea of what her music is about; consider everything I write from this point on ancillary, if you will. On Better at Night, Evans successfully couples the aforementioned guitar style with different elements of pop, folk and classical music and her own instrumental mastery (she plays the guitar, piano, and harp on the album aside from providing the vocals). It’s a tender reminder that virtuosic music doesn’t necessarily need to be flashy or hard to digest.

“Lyre Song” is great early proof of that. Glistening guitar motifs meet rhythmic samples and pleasant auxiliary instrumentation, laying the foundation upon which Evans builds her intricate vocal harmonies with which she conveys ‘a tale of twenty-something distraction, a crisis of confidence and fear of being left behind as friends disperse for worldly adventures.’ The balladesque “Rooftops”, perhaps my personal favorite on the album, delights with a heartfelt chorus and an upbeat, country music-inspired ending section, whereas “Empty Rooms and Aeroplanes” places the harp, a woefully underappreciated instrument in my books, in the focal point of the minimalistic yet intricate composition.

Let’s talk about her vocal performance for a brief moment here, because I know that it’ll be one of the major points of contention regarding Better at Night. It is an acquired taste, admittedly, but to me, Evans’ voice has an almost childlike sweetness to it, bright and warming. Pure and innocent, like a dew drop on a freshly budding flower, it perfectly resonates with the delicate acoustic instrumentation to form a magical and touching whole.

Of course, this would be nigh impossible without a sound enabling such graceful interplay. Producer Martin Ruffin and his studio, which he built in an erstwhile barn, lent themselves very well to the music in that regard. From the percussive stomps and claps, over the gentle chimes and glockenspiel, to the main instruments guitar, piano, and harp; every single part of Better at Night has received utmost care to be heard according to their true sonorous nature throughout the record’s fleeting but impactful runtime.

In a move usually reserved for prog rock bands and classical ensembles, Evans closes out her début LP with a short three-piece suite called “Postscript”. Part one, “Yrs”, is a short chamber music-informed number, replete with poignant piano touches and apollonian string arrangements; “Otono”, the second of three parts, puts the piano in the spotlight by having it be the only instrument featured throughout its 1:12 minutes of runtime; and “Drift”, the longest of the “Postscript” songs, is without a doubt one of the most beautiful solo piano pieces I have heard in recent memory, each note played a tiny glimmer of consolation on a weary soul. Personally, I found this suite to be an elegant, balletic change of pace. It only speaks for Evans’ talent as a songwriter that she accomplished this smooth transition from folksy numbers to classical pieces without having the latter stick out as out-of-place anachronisms.

In conclusion, what else remains to say that I utterly enjoyed what had to be at least a dozen listens of Better at Night? After all, the 26 minutes it spans are so full of heart, life, love, and charm that it’s hard to resist looping the record and just letting it tug at your heartstring for a while. Natalie Evans has certainly won my heart over with this her incredible début, and I can’t recommend it fervently enough.