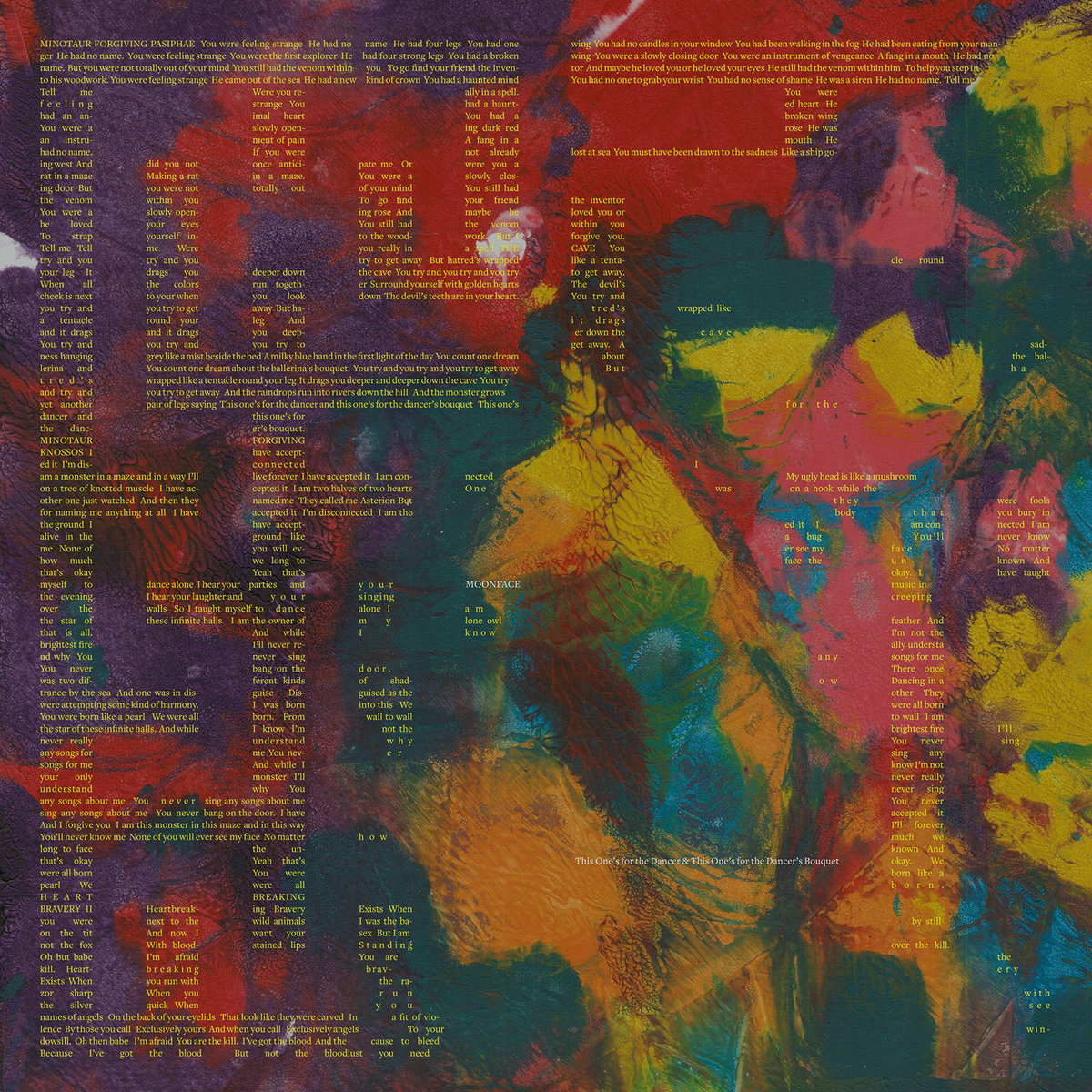 By Spencer AdamsNovember 25, 2018 No Comments

Moonface has saved the best for last. An album seven years in the making, TOFTDATOFTDB is an epic experience that should not be missed.

My initial thought that came across my mind as I looked at this album was, ‘fuck, this thing is long’. I saw sixteen songs pushing nearly ninety minutes of music and I almost felt overwhelmed before I had even pressed play. Let me tell you, dear reader, that this album is an absolute masterpiece. The weaving of story between the tracks and the multitude of different instrumentals and effects creates an experience that I have not felt in years. There are beautiful subtleties laced throughout that may not present themselves on a first listen. The whole record is a dreamy journey from start to finish, and worth every second.

Krug explains that their are two different musical ideas working through his songs on the album. The first is the “Minotaur” tracks, which bring a percussive, marimba quality to each songs (and are personally my favorites on the record). The other idea is the more electronic and at times melancholy tones found on the rest of the record. The dichotomy of these two sounds mesh so well together it can make you forget that their are two different themes at play. There is a relaxing atmosphere hanging around each track. Even with similar elements portrayed in each idea, there is never a moment of boredom.

I have to feel a bit upset that summer is over because “Minotaur Forgiving Knossos” would find itself perfectly content there. A bubbly, upbeat rhythm paired with Krug’s dry vocals feels perfect as music to play on a lazy drive. The mood may not show it, but the song is actually quite sad in its message. It tells of the Minotaur hearing the music of the people outside of its labyrinth and how it is upset it cannot join in the festivities. It learns to dance on its own to the music, all while realizing its own loneliness in the process. The Minotaur does have a slight resolution of its feelings near the end, but it doesn’t help to take away the irony of seeing all of this through the ‘monster’s’ eyes. Krug does explain that while the Minotaur does not necessarily represent himself or anything intentionally, he does encourage anyone who can apply some kind of relevance to do so.

I am a sucker for jazz implementation, and “Sad Suomenlinna” loves to butter me up with them. It is a groovy song, bringing back feelings of the late 70s disco era. While not the only song to use such jazz tones – “Hater” and “Last Night” utilize them wonderfully as well – “Sad Suomenlinna” pushes them more into the foreground by cutting out much of the other sounds found in the rest of track. This allows the saxophone to really pierce through the song and make them meaningful. The extra accents near the beginning help build up a sense of foreshadowing, just to showcase these tones all the more when they appear.

“Walk the Circle in the Other Direction” may be one of the more musically straightforward tracks on the record. There is, once again, those jazz tones I love so much, but there is also something more: an air of seriousness hangs over the track. There does not seem to be quite as much emotional push to it, and I believe that is the point. It’s supposed to be a more honest message, void of excess ambiguity. A multitude of metaphors can be found here, but they are not so abstract that they can not be found relatable. The idea of challenging your own perspective and keep pressing forward can find its message rooted in many people’s lives. It is a phenomenal end to the non-Minotaur tracks, and shows the magnitude of Krug’s writing capabilities.

I am not sure I can relay enough how amazing this album is. I went into it expecting a bit of indie experimentation with quirky sounds. What I found, however, was one of the best albums to come out this year. It is a campaign of creativity from Krug, and made all the better with those quirky sounds and indie experimentation. It’s sad to see the Moonface moniker be put to rest, but at least we have a remarkable achievement to end on.