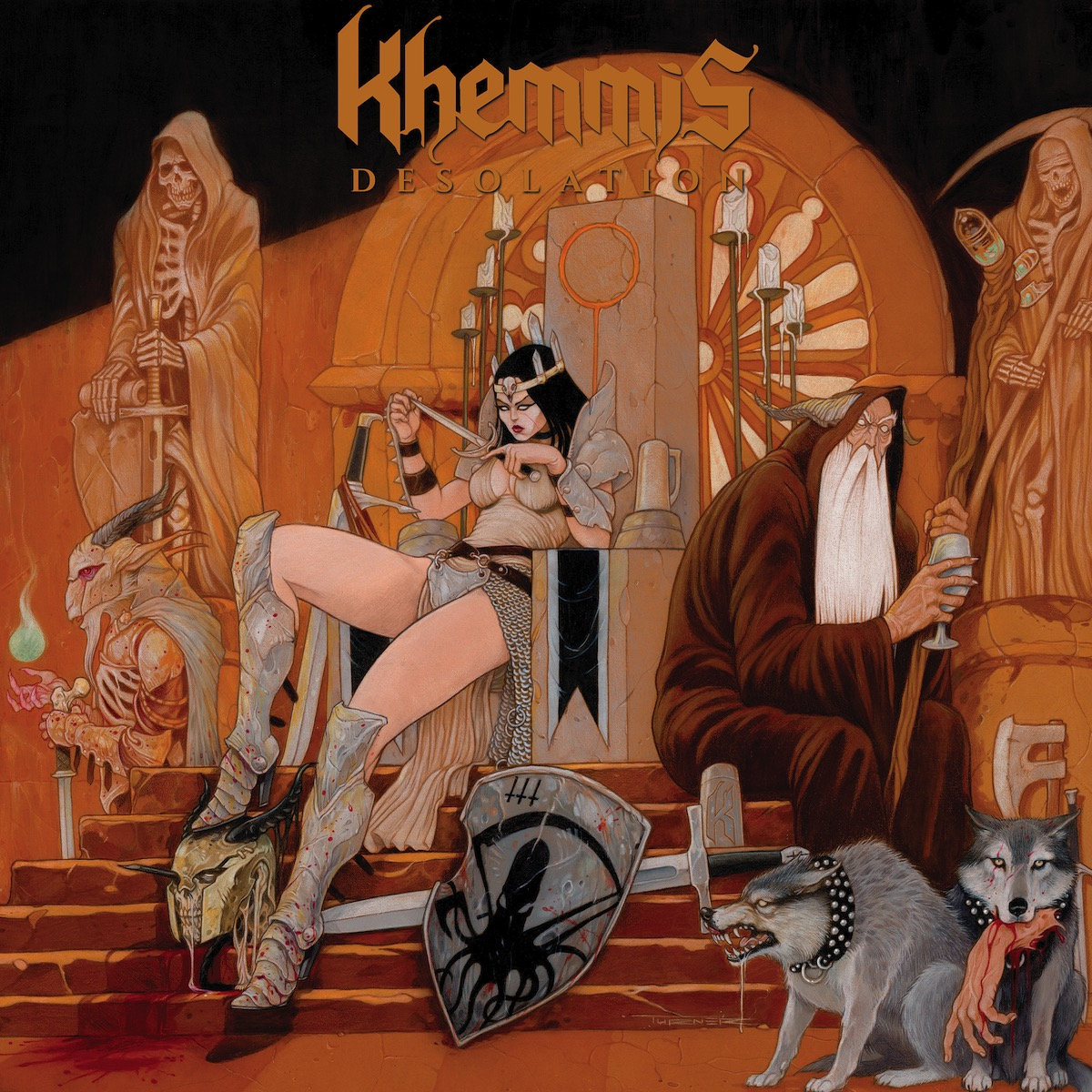 Khemmis solidify their place in the modern doom pantheon with another wonderful record that propels their riff-heavy, melodic sound forward in Desolation.

Khemmis. Is. Back. The Denver doom rockers seek to solidify their reputation as the best band in their genre as well as the premiere musical export of Colorado. Okay, maybe that second part is just wishful thinking. Regardless, we have Desolation before us, and it sounds great. Having released their acclaimed album Hunted two years ago, I was ready for more, but I knew I couldn’t do this alone. I had to get my fellow doom pal Jake involved because we have that Khemmistry. Together, we offer some insight into one of the most anticipated albums of the year.

I listened to this album twice and already knew what I wanted to say for a majority of this review. Khemmis don’t waste your time and I appreciate that. Over three albums, they have gotten tighter and more exploratory, but ultimately haven’t changed their sound enough to warrant a re-examination. They just want to give you more, in terms of quantity and quality. This is fine! There’s so many bands out there that wish to progress more and more down a chosen path, and these guys do just that.

This album made me notice a trend that Khemmis‘ music is taking on. With each release, they seem to be folding the doomier side of their sound further inside their music. This doesn’t hide or make it more scarce per se, but rather makes it more subtle and less domineering (though “From Ruin” has doom aesthetic in abundance). To be fair, I don’t mind an upfront doom sound, but they do melody and heavy rock confidence so well that I’m glad they’re still a priority. The production has been leveled up as well. It didn’t really need it, but it is nevertheless welcome. Riffs squeal with the utmost fidelity and clarity, drums are crispy, the boisterous vocals are crystal clear and prominent. This is one of the best sounding records I’ve heard this year.

As for the actual music, as I said, not much has changed. The band may employ a rocking, riffs-above-all attitude, but the other elements aren’t lacking. In fact, I’d say the biggest surprise of the album is the improvement of the vocals. They have always soared high above the crunchiness of the instrumentation, but we get that twofold now. The scarcely used harsh vocals especially are grittier and monstrous. The middle of “The Seer” is vicious with grinding, churning guitars and a verse’s worth of savagely delivered vocals.

“Flesh to Nothing” is a wonder to behold. Its scrumptious melodies call back to their last album’s title track. The chorus sees the vocals deepen and get some layering for an epic feel. “Maw of Time” is appropriately grandiose with all the markings of a great Khemmis song. Guitars morph from wailing melodies to heavy rumbles with ease, and there’s a great mix of clean and growled vocals. And the intro riff to “Bloodletting”? Absolutely gorgeous. This is a fine example of a band sticking to what they know, but still pushing themselves to bring something new and exciting to the table.

It’s simple: other bands play, Khemmis rock (please don’t sue me, Joey DeMaio). I will not stop praising this band until their popularity is as big as their sound. No matter what, they will always be one of my favorite bands in the game and Desolation shows exactly why. Their monolithic sound and penchant for head-bobbing catchiness combined with stellar songwriting makes them an unstoppable force. They evolve ever so slightly with each album and I wouldn’t have it any other way. Bask in greatness; this is one of the best albums of 2018, as predicted.

Denver’s own Khemmis are back! After a couple of fantastic albums in Absolution and Hunted, the incoming Desolation, out June 22, continues the theme of one-word titles. It also reinforces why this band are one of the finest American metal bands in existence. Their mix of melodic clean vocals, fuzzy guitars, and thunderous drumming have had me captivated since I first heard them. Desolation does nothing to change the formula, but rather expands on it in various ways.

Khemmis have always followed a unique path when it comes to their style, even within the context of ‘doom metal’. Not quite stoner, not quite funeral, and not quite classic, they find ways to mix these with their own secret ingredients to create a pretty unique cocktail. One of the not-so-secret ingredients is lead vocalist Phil Pendergast’s signature timbre. His range and delivery are a perfect pairing for their style. The first single, “Isolation”, is a showcase of his flexibility. It’s a more upbeat track than we usually get in the genre, and I can say that I have listened to it every day since it was released. The subtle movements, guitar solos, and vocals are a perfect gateway song for the band. Given that this is the first single they released after signing with Nuclear Blast, this is a smart move.

As good as “Isolation” is, it’s a shadow of what comes after. “Flesh To Nothing” is one of the more dynamic tracks that this band have created. Catchy riffs, harsh vocals, and twisting movements pervade the seven-and-a-half minutes. Both sonically and lyrically, the band move the closest to pure doom. This track brought an instinctual smile to my face on my first listen and I quickly noted it as one of my favorite songs this year. Up next is the noticeably more aggressive and sinister, “The Seer”. The low-end riffs and dissonant melody push and pull the song in a tension that’s one of the crunchiest on the record. Khemmis probably won’t ever go full sludge, but this one is damn close. The harsh, searing vocals by guitarist Ben Hutcherson add an element of danger that’s needed to shoulder the lyrics and themes that the song discusses.

The final song is perhaps one of the most sprawling on Desolation at just under ten minutes. This isn’t their longest song ever, but there’s a certain economy to it that makes it one of the more accessible, yet uncompromising doom songs I’ve heard this year. Around the three minute mark, things scale back to just a single guitar and vocals, and it’s astonishingly effective. The dynamics continue throughout the song with timing changes, harmonies, and solos. I think this is their most diverse and confident outing thus far and will stay in rotation for a long time. The slight evolution here and there gave me something new from Khemmis, but left intact what I love most about them. They are rooted in the heritage of doom metal and heavy music in general, but their modern approach sets them apart. It’s a beautiful thing.