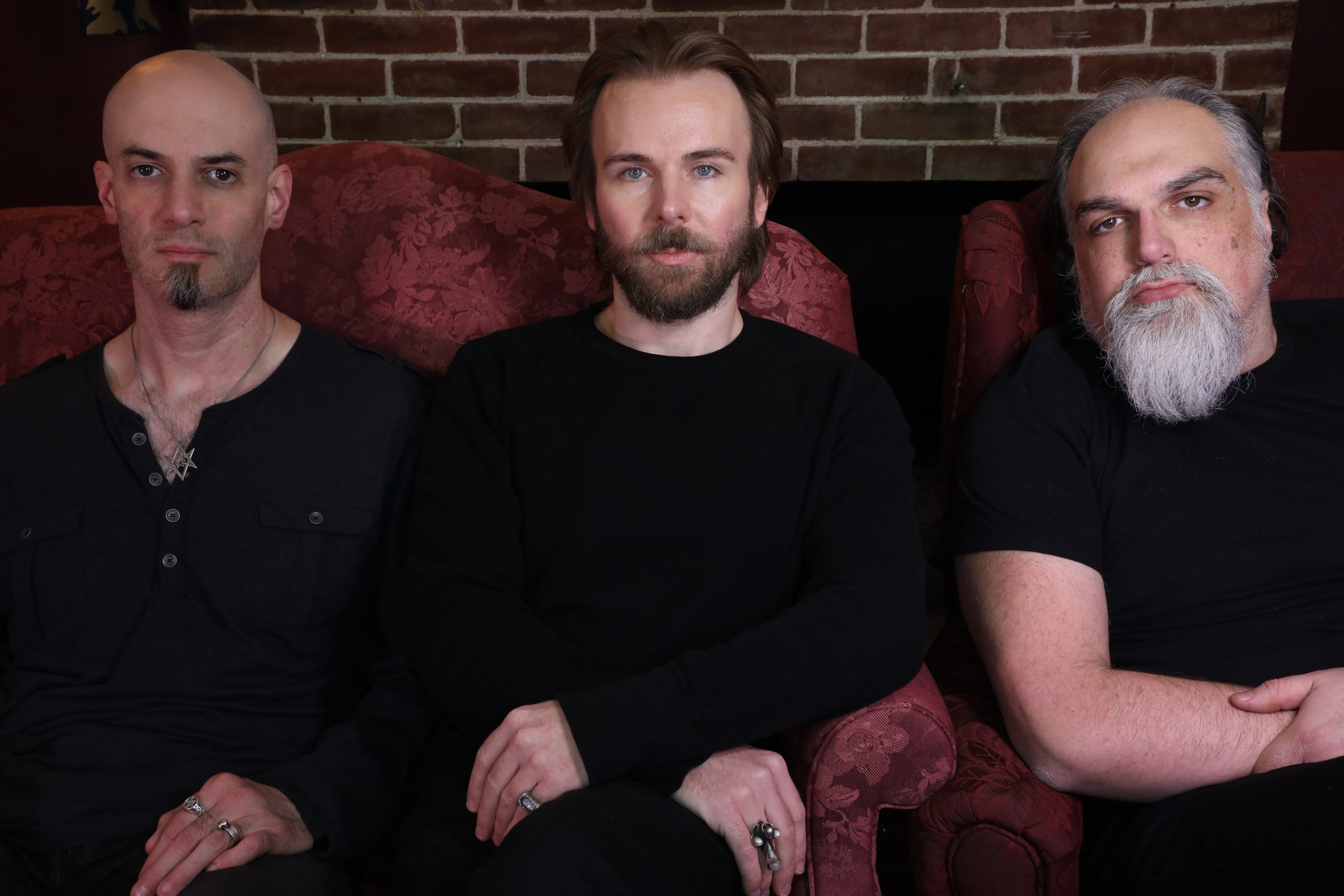 One of the greatest bands ever brings us some new awesome material. Moss Grew on the Swords and Plowshares Alike is a mesmerizing statement to the ever-changing and awe-inspiring musical ethos of Kayo Dot. Any and all words about it are mere motes of dust in the wind which sweeps about, bringing these surreal sounds to our ears.

Kayo Dot is synonymous, to me at least, with the most emblematic notion of forward thinking in music, as well as what it truly means to create without any kind of bounds whatsoever. I really can’t think of any other band that is so apt at pushing the envelope with this much success in terms of musical output. As a long-time, die-hard fan of the band among other things, I am somehow still impressed with every new release, one way or another. Two years ago, I reviewed Blasphemy here and while, to an extent, it was expected to see the band taking the direction set by Blasphemy forward, it is also rather unexpected how exactly this materialized.

While I did enjoy Blasphemy, it didn’t seem to stick with me like other Kayo Dot records for whatever reason. Moss Grew on the Swords and Plowshares Alike is something else entirely though. It’s easily one of the most exciting and innovative records of this year, boasting a cornucopia of nuance and depth which is virtually unparalleled. I also found myself listening to it so many times by the time I’m writing this (including now) that I simply lost count. That almost never happens, as I really like to make a point with the amount of spins I give to certain albums.

Moss Grew on the Swords and Plowshares Alike, recorded with the original lineup of maudlin of the Well, celebrates the 20th anniversary of Bath/Leaving Your Body Map as well as 25 years since the inception of maudlin of the Well. Alongside that, it is an explicit revisitation of these originary roots, although not in what you would expect if you know motW. There are plenty of resemblances, which will hearken to those acquainted, but ultimately, Moss Grew on the Swords and Plowshares Alike is a unique record which carves its own path through the nebulous sonic realm it calls home. Toby Driver and Greg Massi are responsible for the sounds and Jason Byron is yet again responsible for the madly vivid lyrical backdrop.

The first thing that caught my attention about this album was its odd title. Sure, nothing is particularly ‘normal’ about the band’s artistic output, but it seemed like it just doesn’t exactly click. It seems that actually it’s inspired from a biblical reference. Upon inspecting the verse under Isaiah 2:4, it becomes a little more obvious, as Toby Driver clarifies: ‘It’s about forsaking war for peace and good deeds. In our title, moss growing over both the swords and the plowshares just says that the end is the same, either way.’

The mysterious and oddly fluid cover art was painted by Driver on a 30″x30″ canvas with oils, showing us his depiction of “Get Out of the Tower” in a sense. For the first time, we also notice that neither the album title nor the band name are present (well, except for Stained Glass), which also struck me as another oddity on top of the rest. In regards to this aspect, Driver simply stated that he did not wish to cover up any of the image. It seems like a sound decision if you ask me, and it kind of further adds to the mystic, almost arcane vibe of the music.

Speaking of vibes, this return to roots kind of walks hand in hand, on a certain level, with how Gamma Knife was born. In case you’re out of the loop, when Gamma Knife came to be, some nine years ago, it was mainly due to Driver feeling that black metal bands had extremely boring writing, without making any use of the potential of the aesthetic – noting that presently he no longer sees this as an issue, so to speak. Appropriate, is it not? Lots of great things in art are born as reactions to currents. To drive the parallel home, Moss Grew on the Swords and Plowshares Alike is born out of a similar sentiment, but instead we’re looking at European gothic metal. He feels that most bands in said style are painfully boring and unsophisticated, while the aesthetic is rich – brimming with potential.

Somehow, in the collective consciousness that revolves around the musical vicinities inhabited by Kayo Dot‘s music, a lot of us are still associating the name of the band with a high level of experimentation and an ultimately avant-garde kind of music. It was a heavily instilled leaning which was purposefully sought for by Driver, the driving force of the band (pun not intended). As far as the past eight years are concerned, the band has been moving away consistently from that and I feel that Moss Grew on the Swords and Plowshares Alike marks the release which really embodies this change on all possible levels, in the most refined manner. Change seems to be the only constant in the band – in terms of its sound at least – and yet again it paid off to explore different avenues.

Moss Grew on the Swords and Plowshares Alike still manages, like virtually every other record, to maintain that otherworldly mood and surreal vibe, which succeeds in permeating every musical layer. I’ve been trying to articulate that aspect better over the years, but a more satisfactory phrasing simply eludes me. Although, this mood so to say, is now more receded, whereas in the past it was a focal point of the sound. One notable aspect of the album is how it achieves a thespian dimension in its manifestation. It’s wildly vivid – not like other records weren’t – evoking a narrative with a staggering clarity that feels ancient, yet part of our present: something inextricably tied to a sense of relatability, while also hearkening of things that are beyond anyone’s grasp. A riveting display of aural craft, to say the least.

The thing that ‘demolished’ me the most was “Void in Virgo”. I lost count of how many times I spun that as well. In a sense, I feel like the way it rests alongside the other songs is eerily reminiscent to how “And He Built Him A Boat” rests alongside the rest of Hubardo. I can’t explain it properly to be honest, there’s something almost heartbreaking, tender, and intimate about both of them and how they contrast with the rest of the material that makes them pop like lone stars in the night sky. Anyway, “Void in Virgo” is an excellent example of how Kayo Dot is more than apt at crafting catchy phrases and bits you can legit sing along to, with melodic lines that will win your heart over thousand-fold. It’s also a track which stirred me to the point where I no longer felt the contour or weight of my body. Around the time the solo kicks in, I was one with the stream of sound and the sound was dispersing through the universe freely.

The album feels somehow compact, for whatever reason, even though it’s a solid hour in length. I guess I could say that it’s so engaging, detailed, and immersive, that time simply loses meaning and is no longer a focal point in my perception. The songs are also fairly beefy in length, averaging around eight minutes, except for “Spectrum of One Colour”, which is brisk by comparison. The textures explored throughout feel endless, however. The music is overflowing with rich tonal varieties, even though some instrumental hooks may at times sort of imply otherwise.

While I tried unpacking the contents of the lyrics, my efforts will require considerably more time to yield any significant thoughts, so I’ll leave you all to enjoy that task yourselves, for whoever will take it up. It’s worth mentioning that they’re at the same level of beauty and flow as they always were; Byron never disappoints. Of course, what makes the words pop more than anything is Driver’s voicing of them. I will go ahead and dare say that he delivers his most powerful and compelling performance as a vocalist. I was honestly stunned by the way he articulates himself on the album. He proved his versatility a long time ago, but here it almost feels like he’s making a statement out of it.

I could say that the music follows suit with how I described the vocal part. Moss Grew on the Swords and Plowshares Alike is a multifaceted journey, each facet presenting an unexpected side of the story that’s being told. From the deeply unnerving cloud where “The Necklace” is found, which feels like almost entirely inhabiting oneiric space, the noisy, dronesque, nigh-psychedelic ending of “Epipsychidion”, or the groovy, catchy, yet brooding tone of “Brethren of the Cross”, to the magical and arcane nuances present in “The Knight Errant”. Yes, there are many more things hiding in there. I just figured that it would be nice to actually pinpoint some. It’s futile to make a bit-by-bit dissection; it would be an insanely exhaustive amount of work with practically nothing essential to show for it.

The highly dramatic contents of the record, paired with its world-class production value, offer an unforgettable experience. Moss Grew on the Swords and Plowshares Alike is definitely one of the best Kayo Dot records, and a thoroughly amazing album which seems to be intended for an attentive, discerning, and patient listener. I do want to assure all of you that the reward is proportional with your investment in this record. Don’t be shy and make sure to spin it thoroughly and many times to find the treasure.