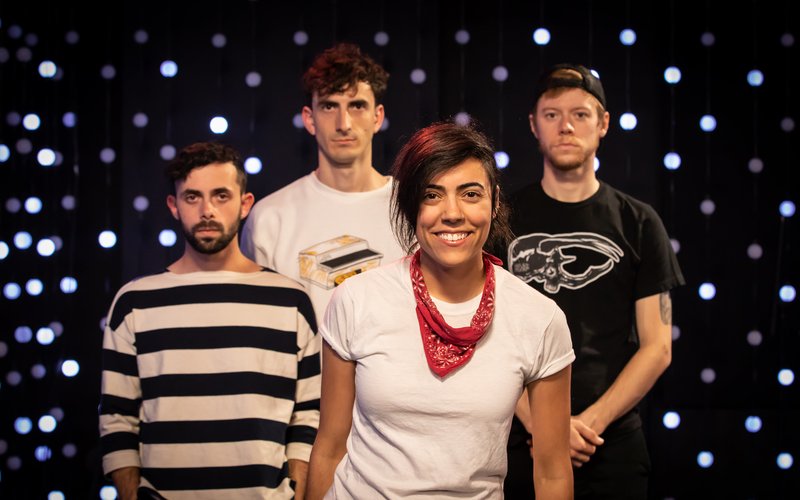 By Faisal BinzagrAugust 8, 2020 No Comments

illuminati hotties‘ sophomore album FREE I​.​H: This Is Not The One You’ve Been Waiting For is probably the wildest 23 minutes in music you will hear in 2020 – and it’s awesome.

As the old framework of the music industry evolves and music consumption habits shift, thereby eroding previous hard indicators of success like album sales (which have since given way to streams per track), it’s becoming increasingly mainstream for artists to play with genres. Simply put, the commercial incentive to keep music in boxes seems to be melting away. One need look only as far the success of Taylor Swift’s latest release to understand that genre as a tool for commercial success is – for the time being – losing relevance. Which brings me to illuminati hotties and their genre-defying new release FREE I​.​H: This Is Not The One You’ve Been Waiting For.

I stumbled upon illuminati hotties recently by complete chance, and instantly knew that I needed to do everything in my power to make as many others stumble upon them as I could – hence, this review. It’s difficult to describe the experience of listening to this album, and I encourage you to stop reading this and go check it out instead. If you’re planning on sticking around, then I’ll give describing this beast my best shot.

Free I.H has been described as a ‘mixtape’ in various press release material. It’s the second album by illuminati hotties, an indie rock band masterminded by frontwoman and multi-instrumentalist Sarah Tudzin. Unlike the band’s debut record, which followed a more conventional rock template and was – in many respects – rather subdued, each of the twelve tiny bombs that comprise Free I.H’s 23-minute whirlwind consist of more ideas, influences, time signatures, and tempos than I was able to keep track of… all while somehow maintaining coherence and fun.

Despite the fact that listening to this mixtape is akin to being swallowed by a gargantuan typhoon, there is still a sort-of pattern to be gleaned here when looking at it from far enough away (perhaps through the lens of a satellite… from outer space). While you have everything from ’80s new wave influences thrown into a punk fray (“WAATTBL”), noise (“free4all”), and even a whiff of rapcore (“superiority complex”), the entire affair is built firmly around an uncompromising punk spine. The other elements are grafted liberally onto this spine, offering a wide range of moods that nevertheless feel – at the very least – like part of the same writing/recording sessions.

The result is pop punk in the literal sense that FREE I.H is bubblegum pop and wild vintage punk at the very same time. The album shares little in common stylistically with the Green Days and Blink-182s of the world – sounding, for lack of a better comparison, like System of a Down produced and performed by Soccer Mommy. If that doesn’t sound conceivable to you, then I leave you naysayers with this gem:

“melatonezone” is catchy, weird, in places abrasive, and imbued with a Mediterranean flair that lends it an irresistibly festive tone. While there is no other track on the album quite like it (the same could be said for pretty much any track here that you care to single out), it’s still a perfect representation of what you can expect going in.

The only acts that comes to mind that sound remotely similar to this in the current indie landscape are Europe’s Calva Louise and the Texas-based Razorbumps (both of whom dropped some terrific material recently that you shouldn’t miss out on), but even they don’t take it as far as FREE I.H. Whether taking this mold to its furthest extreme is a successful experiment or not I leave to your discretion – but I’m convinced that it’s impossible not to have at least a little fun with it.

Apart from the brisk run time and musical extremes on display, I imagine fans of illuminati hotties’s previous work might not be particularly enthused. The band’s debut album Kiss Yr Frenemies is easy listening by comparison, being more rooted in conventional indie rock songwriting and entirely devoid of the wild genre experiments present here. While I personally would have loved to have more material to rock out to on FREE I.H (at 20-ish minutes, it’s over far too quickly for my liking), I can see how the runtime might be just right for people who’d rather their music didn’t shift stylistic gears at the same rate as its BPM. This mixtape certainly isn’t for everyone, and some of the band’s earlier fans might even find it alienating – and I’ll concede, it isn’t difficult to understand why.

Ultimately, I’m grateful for discovering illuminati hotties when I did. Had I stumbled upon their music during their debut LP’s album cycle, I might overlooked their future output. FREE I​.​H: This Is Not The One You’ve Been Waiting For might not have been the one I was waiting for, but it was the shot of sonic adrenaline I very much needed… and my summer has become a better time because of it. Don’t miss this; it’s just 20 minutes of your life, and it will be very well spent!