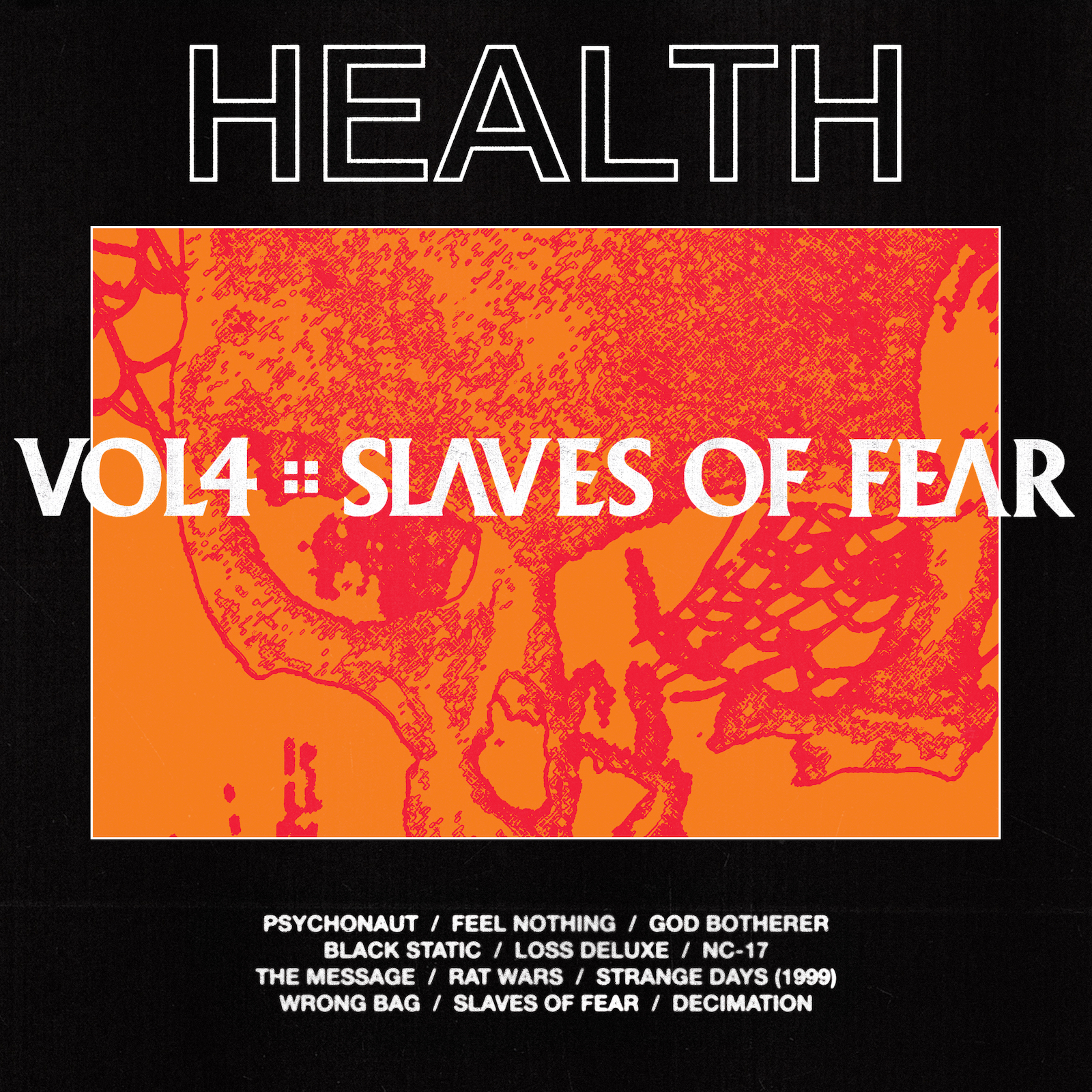 By David RodriguezFebruary 4, 2019 No Comments

HEALTH‘s latest offering is euphoric to those looking for an emotional experience unlike any other. Prepare to be baptized in darkness while searching for meaning in a relentless, numbing world of noise.

I make my love for HEALTH pretty apparent. It’s an emotional experience for me, one that often contradictorily deadens my sense of feeling, and my sense of self. I simply am when I listen to the LA noise trio. Ever since their last LP, DEATH MAGIC, I’ve considered them an absolute force to behold as they dive headfirst into a black pool of modern erosion, where the only way to survive is to feel nothing. Sounds scary, but the way HEALTH command the sound of their music makes it oddly warm and comforting, even at its most nihilistic. VOL. 4: SLAVES OF FEAR sees the band dive deeper, get darker, and progress into something just outside the realm of sinister.

When I listen to SLAVES OF FEAR, I get weird visions. People with their skulls visible and of fire filling the dance floor of a seedy club in slow-motion. Walking down an unlit city street as the flanking buildings on either side squeeze in to suffocate you the faster you run. In a way, that I will admit must not be totally healthy, it’s… affirming. What HEALTH offer is an escape, not one that makes you forget about the neverending deterioration of life, but rather throws you in it. It’s to remind you of the inevitability of it all. It’s heavy, metaphorically and literally.

Literally, the concept of heavy is employed freely on this album. The intro chugging guitar on “FEEL NOTHING” tears through you with ease. “LOSS DELUXE” has a stuttering sample melody that pummels you down. Nothing about SLAVES OF FEAR is abrasive enough to garner cheap comparisons to metal, but it’s as callous and unfeeling as any song from the extreme end of that genre. There’s a special sort of beauty in its brutality as the sound stays expansive throughout, but still has moments where its chilling mood fills your lungs and constricts you into a feeling of claustrophobia. The first track “PSYCHONAUT” even misleads with its drowned-out intro (some of the ‘sunniest’ stuff I’ve heard from HEALTH) that devolves into a tense sequence led by robust drums and followed closely by Jake Duzsik’s ethereal vocals. If the exhaustion doesn’t do you in, the crushing noise at the end will.

Metaphorically, it’s hard to fully encompass how SLAVES OF FEAR feels as a whole. It’s undeniably shrouded and obscured by darkness, carrying many thematic and lyrical references to being numb or feeling nothing, but simultaneously carrying a hedonistic air to it all. As the melodies of “FEEL NOTHING” play with your mind like a shot of Demerol behind the ear, you wonder: is this to numb you or to make you feel better? Are they the same thing at this point? “BLACK STATIC” offers no answer, but gives you a vile rhythm courtesy of its mechanical drums and guitars. Duzsik’s vocal flow is almost rap-like in the middle of the track, which is a welcomed change-up from the formula, and endlessly imitable.

On a smaller scale, the snappy drum production of “RAT WARS” aligned with more traditional dark synthpop music is a good complement to the band’s eviscerating buzzsaw synths, and instrumental “WRONG BAG” is a hellish and suspenseful chase through dank backstreets waiting to eat you alive. By far, the biggest surprise is “DECIMATION” though; half-guitar ballad, half-vortex of noise, all absolutely defeating. This is how it feels to become fully subservient to the entropy of our world. Even after several listens, I remain unsure if this song signals the defiant burning of a final light of hope in the world of HEALTH, or that same final light’s snuffing, drowned out by the ashes of our former world. It’s a logical conclusion to an album with a false start reluctant positivity, torn apart by reality.

HEALTH remains a very contradictory force. As quick as they are able to inebriate and numb you from the side-effects of an ailing world, they’ll also kick you onto the cold, steely ground to make you feel every crash and scrape. In doing so, they remind you of one thing: you’re alive. I don’t think I’ve felt more painfully, anxiously aware of my own slow mortality than I do when listening to HEALTH. It’s invigorating and calming with elegant moments of a rhythmic abrasion that erodes at your protective carapace, revealing your truest form. If you’re not in a vulnerable place when you listen to SLAVES OF FEAR, it will do everything in its power to open you up and make you feel things you likely rarely allow yourself to feel. This was an absolutely outstanding experience, sure to be a bold highlight of the year.