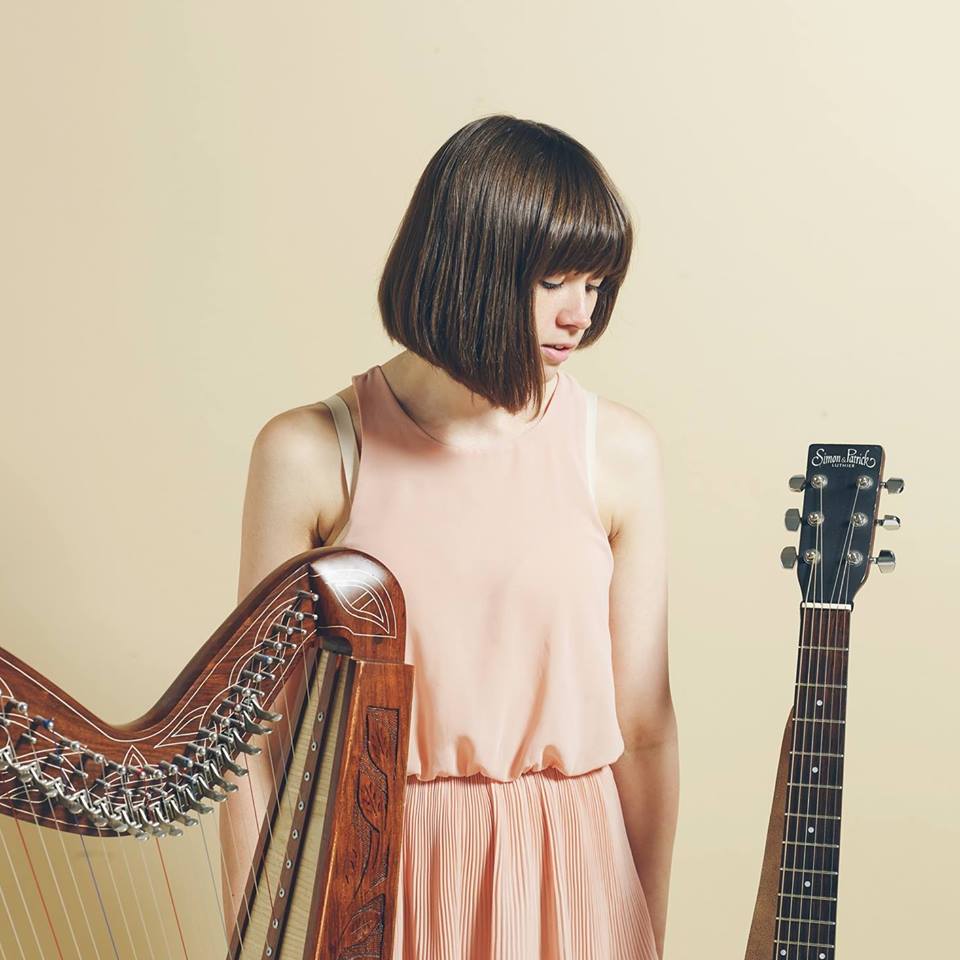 By Landon TurlockFebruary 4, 2019 No Comments

Natalie Evans first caught my attention with her stunning album Better At Night, which ranked seventeenth on Everything Is Noise‘s top 50 albums of 2018 (read our review here). The album manages to be gentle and catchy while simultaneously complex, featuring a unique blend of math rock, folk, harp, and piano. She has been developing her intimate and technical sound over a series of releases since 2010. We had a chance to talk to her about her dynamic development as a singer-songwriter, and are excited to have her join us as this week’s Weekly Featured Artist.

Evans began her musical journey at age 12, learning guitar inspired by singer-songwriters and both her father and brother, who played guitar. At 15, she took to the stage at a school talent show, which led to some support, and further performances:

‘…my friends encouraged me to perform more in front of people. I also started writing my own music at that time and performing those songs soon after. I always enjoyed writing songs with less usual chords or a fingerpicking style. When I started out my biggest influences were John Mayer, Elliott Smith, Death Cab and Bright Eyes, and I went on to discover math rock and more underground emo music.’

Comparing Evans‘ debut 2010 EP to her most recent output shows how much she has refined what has always been an adventurous musical style into something multi-layered and expansive. Her debut consisted solely of acoustic guitar and vocals, with a nod to the angstier emo music that inspired her early musical development. However, this sound has evolved and expanded over time. Evans elaborates on how her music has changed since the onset of the decade:

‘Learning different instruments has changed my approach to music a huge amount. I also learnt a lot from friends I’ve had over the years, particularly Martin Ruffin – the producer I’ve worked with on pretty much all of my releases so far. When we first started working together he showed me how to make arrangements over the songs I’d written and encouraged me to play instruments and use techniques that were out of my comfort zone. Over the years I’ve learnt how to do this myself and become more confident in my own abilities and it’s an amazing, freeing feeling. I’ve also discovered who I am and what I want to do. For example, I used to worry a lot that my music wasn’t cohesive enough, but I’ve learnt that you become a better musician and get more from it personally if you just go with how you feel rather than trying to fit into something.‘

Though Evans plays a number of instruments in addition to singing, her sound seems defined by her mastery of guitar, piano, and harp. The latter two instruments, however, were not added to her repertoire until her twenties:

‘I didn’t play any other instruments except guitar until I was 21. I then started piano lessons where I also learnt about music theory for the first time. I played piano more than anything for about 2 years and I learned and wrote a huge amount in that time. It’s probably still the instrument I play the most.

I bought the harp a year after I started learning piano. I was also listening to a lot of Joanna Newsom and Woodpecker Wooliams at the time and I’ve always taken a lot of interest in different acoustic instruments – I have a charango and lyre harp as well, which you can hear in some of my recordings.‘

Evans, based in London, started to find common ground with others as she developed her uniquely mathy folk style, and released a split project with Yvette Young (Covet) in 2016. The split shows Evans premiere “Rooftops”, a track that also appears on 2018’s Better At Night. The project demonstrates the complementary styles of Young and Evans, both with technically impressive, multi-layered acoustic performances paired with vulnerable vocal performances. Evans elaborates:

‘I met Yvette through our mutual friend Tsunehiro, who runs a Japanese label called Friend of Mine Records. He suggested that we put out a split together and introduced us, I think in 2014 or 2015. I was really excited to meet someone who was doing a similar thing to me and we became friends, did a tour together and have played a few shows together since. It’s been really amazing seeing her grow over the years and become such an inspiration to so many people.‘

Natalie Evans‘ most recent release, Better At Night, feels like a culmination of a previous decade of recording, and it matured over nearly five years.

‘After releasing my EP Houses in 2013 I recorded lots of songs as I was writing over the next 4 years. I ended up with a mixture of harp, piano (instrumental) and guitar based songs and I kept changing my mind about how to put them out into the world. I then met Small Pond (the label who released Better At Night) and they were really encouraging about the versatility in my music. We talked about releasing an album with all of the different styles and I started putting the songs together. I’m really happy with how it came together and I think it represents my work over those years well, with some very new songs on it as well.‘

Evans already has an established body of work and identifiable sound, but she shows no signs of slowing:

‘I’m releasing a new single soon, which I’m excited to put out there, and I have some upcoming shows this month. I’ll be playing all of them with accompaniment and I have some more full band shows coming up this year also. I’ve been writing a lot over this last year which I’m currently demoing to start working towards the next release. Some of the songs are very intricate and some have a lot of space.‘

Evans‘ inventive style is set for further evolution, and will continue to push boundaries. We at Everything Is Noise will be sure to keep up, and encourage you to as well!

‘I will always be writing, taking influence from what I am listening to and trying to learn and develop my musical abilities more. It is part of the freedom of being a solo artist.‘

You can catch Natalie Evans in the UK over the next month at the following dates: