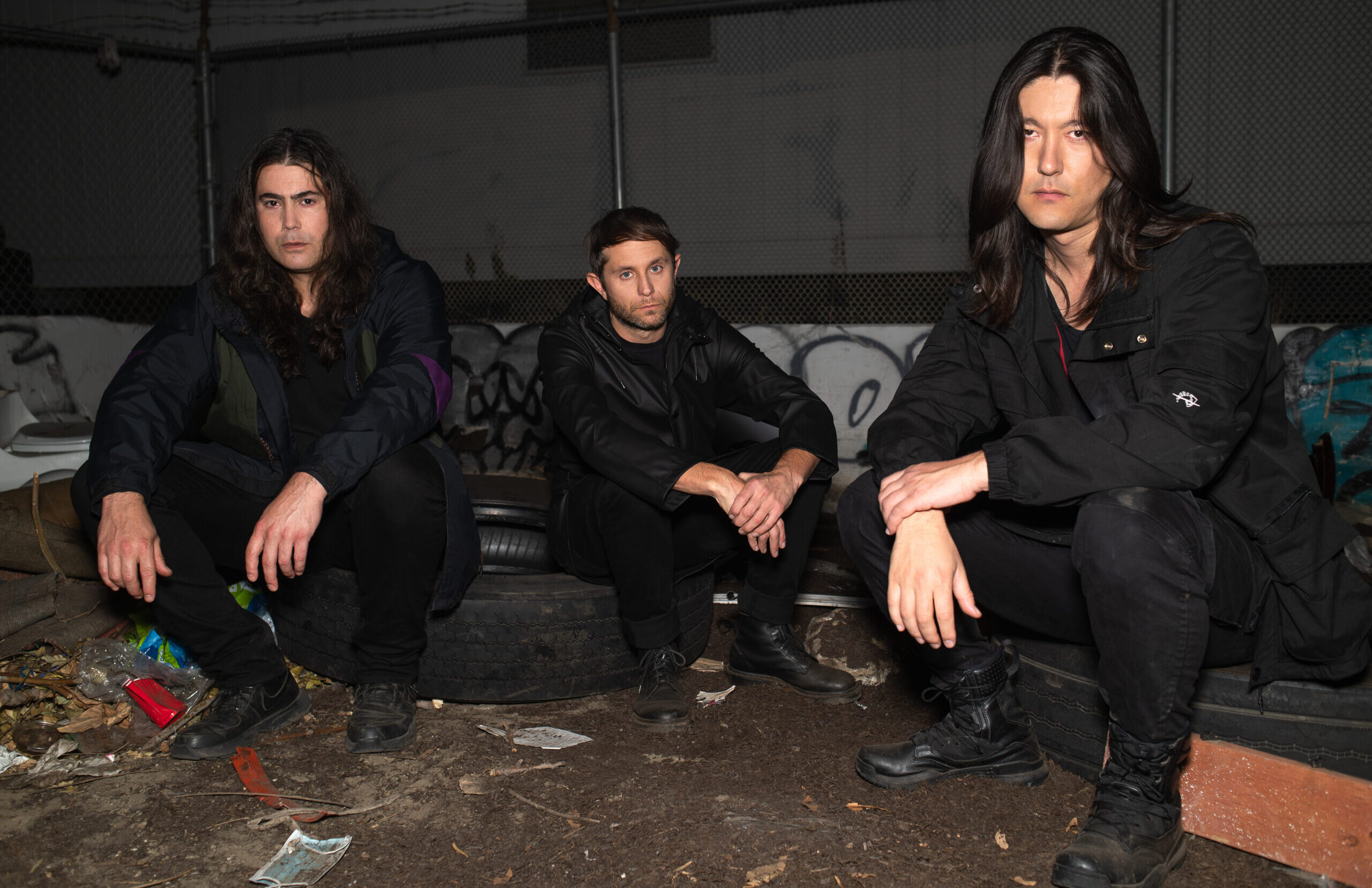 By David RodriguezApril 12, 2022 No Comments

HEALTH return with another collab album that hits harder and deeper than before, with bigger names and cooler surprises too.

[flashback sequence to a slightly younger, less dejected me, so full of joy and life, typing on a laptop in the dark]

‘PART I implies the existence, planned or telegraphed, of a second part and if it’s more collabs, I’m eager to see who they hook up with.’

[return to present time to older, dejected me, devoid of joy and life, typing on a laptop in the light]

It was only a matter of time before HEALTH showed their whole hand. DISCO :: PART I, aside from the name itself, showed a lot of promise in the connection of the industrial/experimental rock trio and some like-minded individuals. Now, we are faced with PART II and there’s both expected names and big surprises on here.

The nature of an album like this means it’s hard to really encompass what it’s like as a whole. It’s more about moment-to-moment enjoyability and if the collaborations really work. Sure, the constant throughout HEALTH‘s music, solo or collab, is that wasted, dark industrial tone – the kind of music that would soundtrack endless smoke and pollutants impregnating the sky and blocking out the sun to usher in a permanent night. It’s… not uplifting in tone, but I like that – a lot. I’ve loved HEALTH‘s take on alt/industrial rock stuff since DEATH MAGIC graced my ears with those buzzsaw guitars and hammering percussion. It’s not for everyone, but for those who it is for, it’s everything.

A lot of HEALTH‘s appeal is the way they distill our stark reality into the cyberpunk hellscape we seem to be constantly hurtling toward. In the same way that people say that good satire doesn’t seem to exist anymore because reality put it out of a job, HEALTH take the dark corners of our world and prop them up in a way that faces them head-on in an emotional, relatable fashion, if dramatized. Vocalist Jake Duzsik himself said that the band has unwittingly become the soundtrack to our ‘shitty future‘ and he’s pretty dead-on with that. Enter COVID – I’m sure y’all know what I’m about to say – which darkened things even more with our friends and family either dying, having great trouble existing in their own ways, or falling into feedback loops of misinformation and hate. There’s other, more positive iterations and possibilities of pandemic survival, but, well… they seem to be a lot farther apart than the negative ones. No one seems to have escaped unscathed, but that’s kind of what happens when you go through a globally traumatic event alone, even though we all experienced it together.

DISCO4 :: PART II is a response to that, a reaction to that. It’s so fucking dark and at times hopeless, which is par for the course for HEALTH frankly, but there’s a lot more here that so explicitly seems to be about the last two years. You can look back on this album in ten years and just hear the absolutely dismal mood. Still, it doesn’t seek to drag you down necessarily, but to be a hand to hold onto while you go through the same exact shit the music is, the same exact shit we all went through the last two years and still go through – never be fooled: this pandemic is not over yet.

The band like to not give a ton of direction when collaborating in this manner. Skeletons are built, and their guest musicians are given free rein to add their own identifying flair. You’d be forgiven for thinking some of these songs are just HEALTH songs with a guest vocalist on top, but that can just mean the collab made a lot of sense. Street Sects? Perturbator? Nine Inch Nails? All bands that have at least a foot in the dark, industrial, menacing wave of music – they also all made songs on here that sound like an almost too perfect merging of their respective sounds. It’s hard to hear where one band begins and the other takes over, so to speak. Not necessarily a bad thing, but a thing nonetheless.

Others however, it’s clear as day where the seams lie – also not a bad thing. Lamb of God? Well, they’re much more forward with their metal sound than HEALTH are, so the double bass drums and modern metal guitar tones on “COLD BLOOD” are very obvious. Good song though, and I’m not even a Lamb of God fan! It’s also a bit more obvious when The Neighbourhood come on board for “NO ESCAPE”. Sure, their pop rock-based music has some darker themes and approaches, but HEALTH‘s got about… a ton more. Still, Jesse Rutherford’s chill voice sounds quite at home over the combination of each band, making it sound like a Sunday drive down the Pacific Coast Highway with a mushroom cloud in the background giving chase. The instrumental is uncanny for something worked on by both bands – cleaner guitars and production presumably from The Neighbourhood‘s end, but more hazy atmospheric leanings from HEALTH. I also love the lyrics on this song:

‘A year’s fast, but the days are slow
Life’s hard when you’re young
And it’s worse as you grow
All the plans we had have come to nothing
All the water under the bridge is drowning us’

I must also shout out the video, which is a weird homage to Metal Gear Solid and its codec calls, along with PS1-era janky action games in general.

The best stuff lies somewhere in the middle for me. Poppy‘s track, “DEAD FLOWERS”, is such a haunting opening to this album. Her voice fits so well with the abyssal instrumental, showing great range between her screams at the end and the siren-like croon throughout the rest of the track. I can’t get this song out of my head. A big surprise for me was Backxwash and Ho99o9, not just on the album, but all on the same track. “GNOSTIC FLESH/MORTAL HELL” is astonishing – Backxwash is absolutely rousing, her voice cutting, righteous, and commanding. Ho99o9 come forth with an equally attention-grabbing verse, cauterizing the edges of the track, flowing through it like lava. It all meshes so remarkably well that it was the only song I looped immediately after it ended on my first listen of DISCO4 :: PART II.

With the way HEALTH formed these collaborations, it allowed for a lot of artistic freedom. Bands weren’t told to sing/rap about anything in particular, they just worked with what beat they got and did their thing, each side building it out until everyone was happy. It’s telling, then, that pretty much all artists chose to lean heavily on tenebrous, depressing themes. Maybe it was a bias in knowing how HEALTH operate and wanting to meet them at their level, or maybe it was just how they were all feeling at the time.

My money’s on the latter – this whole album was made possible by the pandemic and resulting lockdown. Everyone stuck at home, itching for an escape, to turn what little energy and mental power existed at the time to something creative and cathartic. Naturally, feelings of loneliness, isolation, allusions to death and suicide, and much more would seep into the paints that would eventually dry on the aural canvas that is DISCO4 :: PART II. Everyone was going through some serious shit, and processing the world for the last two years of political turmoil and societal rot, especially from our homes on a long-term basis never before seen, has taken a toll. This music is for us. It was for them too – an outlet for all the things we’ve had to endure. It’s a hand to hold through it all.

I get the distinct feeling that DISCO4 :: PART II won’t change any minds about the band’s music, and people coming over here from being fans of featured artists’ music will find their mileage varying with HEALTH, but I believe there’s a lot more like-minded people out there than even I may think. How often do we just wanna listen to some music that gets what we’re dealing with? For so long, this band have processed reality through a drab lens, cracked from neglect and with no repair or replacement in sight. This is the life we’ve been dealt – you may as well cling onto those who understand and make things even marginally more bearable. For that reason alone, HEALTH are one of the most important bands we can turn to when we find ourselves getting too numb for our own good, and yet they still grow to make room for our increasingly ludicrous and hostile world. We’re all fucked, but at least we get a nice date first.

YOU WILL LOVE EACH OTHER