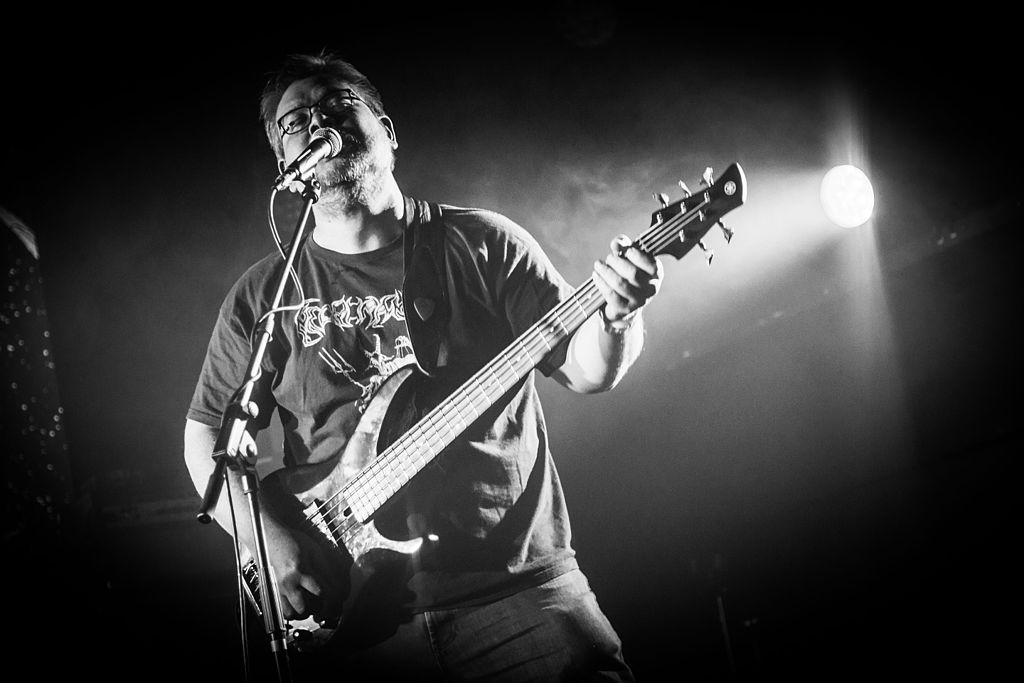 Gnaw Their Tongues – “I speak the truth, yet with every word uttered, thousands die”

Gnaw Their Tongues will drag you down to the murkiest and most twisted nooks of human existence on I speak the truth, yet with every word uttered, thousands die.

Gnaw Their Tongues has held a significant place in my psyche ever since some years back I discovered the albums Abyss of Longing Throats and N.V., the latter of which is a collaboration with UK’s Dragged Into Sunlight. Prior to stumbling across these highly abrasive creations of blackened noise fixated on the darkest aspects of human existence, I honestly wouldn’t have believed such an evil and cacophonous, albeit carefully designed, entity as Gnaw Their Tongues would spark my interest on fire as holistically as it did. Bordering on being unlistenable at times, the act’s albums are traumatic, methodically hurtful journeys deep into the inner darkness of its creator, as well as into that of your own. I speak the truth, yet with every word uttered, thousands die is by no means an exception to that, nor should it be.

Maurice De Jong is a busy, busy man, to every extent of the word. While Gnaw Their Tongues is undoubtedly his main craft, he has recently focused on a plethora of other projects, different by nature but similar by aesthetic, under the monikers of Dodenbezweerder, HAGETISSE, and GOLDEN ASHES, amongst a whole label roster’s worth of others. The man has created a network of filth of his own, where you can map your way from one project to another, then to another, and another, and so on. It’s also simple to imagine someone has a qualm or two about this ‘thousand projects’ approach, but why should you let anyone’s prejudices to dictate what you can and can’t do during your stay in this absurd world?
What makes Gnaw Their Tongues stand out most compendiously as an individual scheme, is its honesty. And before I get a pissed off comment from someone, naturally I’m not saying any of his other projects would not be equally sincere and true to themselves, but then again this commentary isn’t about those to begin with, capisce? Anyway. I speak the truth, yet with every word uttered, thousands die was antedated by an accompanying full-length An Eternity of Suffering, an Eternity of Pain released about a year ago, which I briefly reviewed here. That album was said to be comprised of unused material that didn’t make the cut for this new one, even though in my eyes it was just as bonafide and whole of a release as any other. Regardless, that paved the way for this new chafing, festeringly dismal offering.
The album is washed with sullen and stygian atmosphere, that in all of its pessimism and melancholy still feels like a fresh whiff of putrid air within a genre where very few manage to sculpt anything even remotely close to Gnaw Their Tongue‘s oeuvre. After all, that name rings importance and value, and has been around long enough to become a reference point for a multitude of newcomers on its own field. That’s also one of the reasons as to why it was so disheartening to hear, that this album might be the entity’s last effort for a long, long time, or perhaps ever. But at least the incipient, undisclosed period of silence is foreran by one of the greatest albums spawned from this specific autotroph’s misery.
Ear-splitting high frequencies carry on the titular track for a while until giving way for the ache-drenched vocals and discomforting instrumentation. While being the first track, there’s already a sense of passing and inevitability cloaking the atmosphere, shrouded in a funerary hunch. The following track “purity coffins” takes a step towards a more familiar frame, advancing with a cinematic pace and constantly feeding the tension, that only tightens as the track resumes in violent fuzz and inseparable, instrumental components. Albeit only for a fleeting moment, the relief to this concentrated pressure comes in the form of a hazy black metal-esque throttle that is the beginning of “white void black wounds”, exploding into rhythmic tom hits and agonizing death rattles.
After the overwhelming distorted echoes subside, the focus shifts into a moodier form with “to rival death in beauty”. The vocals ran through a ring modulator takes the foreground, while epic strings and fragile female voices phase in and out. This and the following track, “here is no corruption”, act as an intermission of sorts. The latter grows strongly from a minuscule movement, evolving to a constructed and coherent mode, contrasting the more abstract and shapeless pieces dominating the first half of the album. While getting to the latter part, it’s noticeable that the first makes strides in a bit more reduced manner, as the tracks lack the kind of endlessly gyrating and morphing temper that has held somewhat of a governing status on the past few albums.
That said, “abortion hymn” brings back the exceedingly unsettling, haunted, and severely fucked up ‘mental asylum through a meat grinder’ tone I initially fell in love with when discovering the act. I actually didn’t even realize how much I anticipated this particular aesthetic to pop up again, as the previous albums, Genocidal Majesty and the ‘excess compilation’ from last year, sadly distanced themselves from that particular feel. I still enjoy both a lot, but the return to familiar hunting grounds is definitely welcome. That’s emphatically also why the latter portion of I speak the truth, yet with every word uttered, thousands die strikes me so damn hard. See, the remaining pair not only bask in the horrid fluorescent lamps of this constitution, but expand the sensation to a whole new level.
“a sombre gesture in the faint light of dusk” is something seriously vile and obscene, that freaks me out on each listen. It also showcases aptly the fact that the basis from where Gnaw Their Tongues originally rose some fifteen years ago, was never a comfortable nor a positive one. Instead, the foundations of this unit lie in pain and agony, deep in the darkest thoughts known to man, and fundamentally so. Under the weight of time, people change, their ideals and ways of thinking change. Despite that, the nature of this project stays the same. That in mind, it’s understandable that it resembles certain undesirable sentiments and reminds of a certain mindset, to where its creator doesn’t want to repeatedly return to anymore.

The last track “shall be no more” resonates a meaning I personally wish wouldn’t be true, but what I still relate to, and sympathize with. Gnaw Their Tongues isn’t the kind of music you enjoy, but rather something you suffer through. And to avoid any misunderstandings, that isn’t a bad thing at all, but it’s not a good thing either. What I mean is, that this individual’s internal terror has reached a plane of existence where you don’t need to express any feelings verbally or through writing. And to end this before I dig the famous hole any deeper; if this indeed turns out to be the last, entire album Gnaw Their Tongues will release, at least it’s going out with one hell of a scathing, excruciating, insane, and by all accounts superior, thunderous bang. And I’m fine with it.