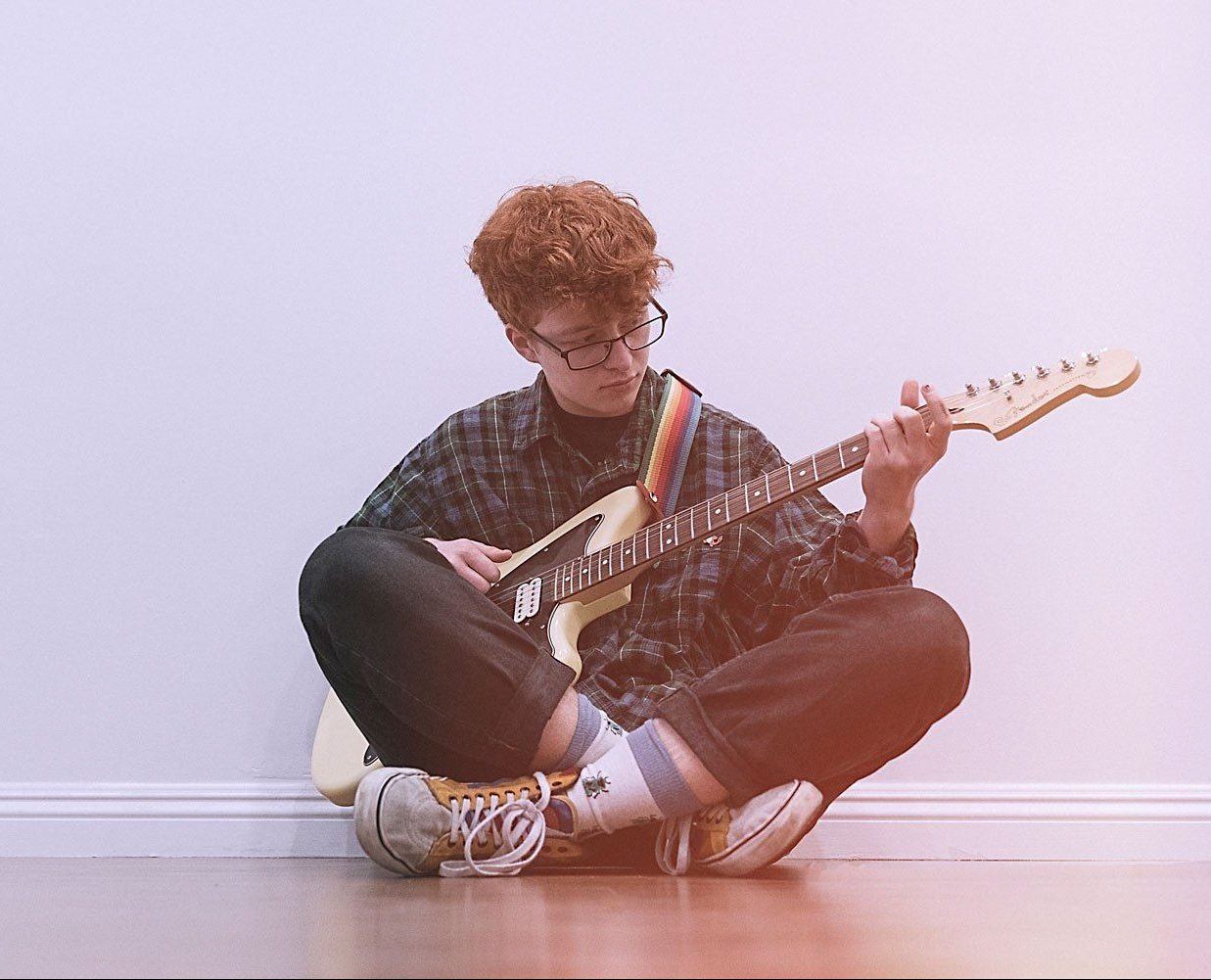 Cavetown‘s new album Sleepyhead is a catchy, open hearted and wholesome journey back to the growing pains of first loves and heartbreak.

My first experience of Cavetown was his 2018 album, Lemon Boy. His brilliantly written bedroom indie struck me with its heart-warming honesty right off the bat. Robin Skinner has a singular talent for accessing the very core of feelings like heartbreak, anxiety, and low self-esteem, finding our inner child beneath them and hugging it out. Through the openness in his lyrics, his simple desire for love and acceptance invites us to get to know these same desires in ourselves. This is hot tea on a cold rainy-day music, which digs up these buried emotions without judgement or angst.

So, when I first started to research for this review and headed to Robbie’s very active and popular YouTube channel, I wasn’t surprised at all to find a sweet and humble kid, who has very little filter between his heart and his mouth. Innocence isn’t really the right word, when his music delves so deeply into loss and mental struggles, but there is a certain innocence to his whole vibe and brand, and it’s clear from his interviews and vlogs that it’s genuinely who he is. I get the impression that he’s been through some shit, but he hasn’t let it harden him and that’s an admirable quality. Even better is the fact that it comes through in his music unhindered. I’m sure all of us want to be kinder and more loving, and just consuming this content makes me feel like I’m back on track.

Cavetown’s music is often described as bedroom pop or DIY. It’s simply produced indie with elements of softer rock that come through most notably in the tracks that have a build-up to them (for an example of this – listen to “Fool” off of Lemon Boy). He sings with a gentle timbre, layering beautiful vocal harmonies over simple ukulele or acoustic melodies. This is the kind of music you slowly find yourself learning every word to, and that’s thanks largely to Robbie’s confidence in keeping things simple and leaning into his songwriting ability. In this regard, it certainly doesn’t hurt to have (Sandy) Alex G as a main influence. Robbie said in interview that when he first heard this lo-fi production approach and how it sounds like he’s, ‘just sat down in his room and made it‘, it encouraged him to allow his own music to be a little rough around the edges, in a voice-memo on the phone kind of a way.

We can see this straight away in the first track of the album and primary single, “Sweet Tooth”. It’s catchy as hell, and there’s no fluff or filler between the hooks. There’s evolution here from the quiet singer-songwriter indie of the previous albums; this is a full band song, where Robbie takes the chance to rock out a little. The accompanying clip is great too, it feels like a scene straight out of Scott Pilgrim.

The next few songs are the real highlights of Sleephead for me. Robbie has never been one to shy from deeply personal and heavy content, and this album is no different.

Take the track “Trying”. Most breakup songs seem to fall into one of two categories: the I’m so much better off without you, you don’t know what you’re missing camp, and the woe is me, achy-breaky heart camp. In “Trying”, Robbie openly admits to struggling and wanting his ex-partner to be the one that comforts him, even though he knows he can’t. He’s not singing that he wants him back, or that he’s become beyond repair, he’s just expressing the pain of the moment, and it is visceral. These are emotions we’ve all been through, yet I for one can’t think of a breakup song that is this willing to show such apparent weakness. The openness is incredibly refreshing.

The tracks “Feb 14” and “Pyjama Pants” are similarly vulnerable in relating the romantic ups and downs Robbie has been through since we last heard him on his 2018 album. “Feb 14” alternates a delicate falsetto through the verses, telling a tale of a failing love with the appropriate emotional brevity. The guitar melody throughout is simple and unpretentious, allowing room for the lyrics to stand on their own. Robbie is not one to hide beneath overly complex musicality or indirect imagery. Lines like, ‘She said she’s here if I ever need someone to talk to/But all I ever wanna talk about is you‘, certainly deserve to be presented as clearly as possible.

“Pyjama Pants” is just as lovely, with lines like, ‘Can we call today?/I just need to see your face‘, which feel painfully personal. It’s such a marker of masterful lyric writing for the anecdote to be universal enough for the listener to attach their own experiences to. This song got me teary, I’ll admit it. It’s sad, it’s bittersweet, and it’s very relatable. Someone pointed it out in the YouTube comments and I totally agree – singing about brushing teeth together and holding hands in pyjama pants, cuts a lot deeper than the usual hyper-sexuality.

The album closes out with “I Miss My Mum” and “Empty Bed”. Much like its sibling single “Sweet Tooth”, “I Miss My Mum” is fun, danceable, evolution of the Cavetown sound. Robbie gets to rock out again at the end of this song at it’s a hell of a lot of fun, it definitely feels needed to lift the emotional weight of the rest of the album.

“Empty Bed”, might then be mistaken for a soft and cute bookend to the album, but Robbie has snuck in some of the heaviest content right at the end here. A quick content warning, this song speaks on mental illness hospitalization and suicidal themes. Please skip to the next paragraph if you find these topics triggering. Robbie discloses his own struggles with suicidal feelings and leaving behind an empty bed when he went away for treatment. He then finishes the song singing, ‘Today I felt scared/Thinking about your empty bed/But I know you’ll be fine/Yeah you’ve got to stay alive/Just don’t forget to take care of you for me‘. This is a direct message, not only for people going through these struggles, but also for their loved ones, and it’s the most wonderful thing that he’s included it. The empty room of someone going through these things is a very surreal thing, it’s like a vision of a world without them, but Robbie speaks to the way, sometimes all we can do is ask these people to take care of themselves for us.

Cavetown’s new album Sleepyhead is an open hearted, wholesome journey, back to the growing pains of adolescence and first loves. Robbie is a bleeding-heart romantic, with the maturity to remain relatable, and the soft exterior to pair comfort with the heartache. This is the kid we thought we once were, and should still aspire to be. Sleepyhead is a catchy and faultlessly produced long play, that never intrudes or obstructs its substance.