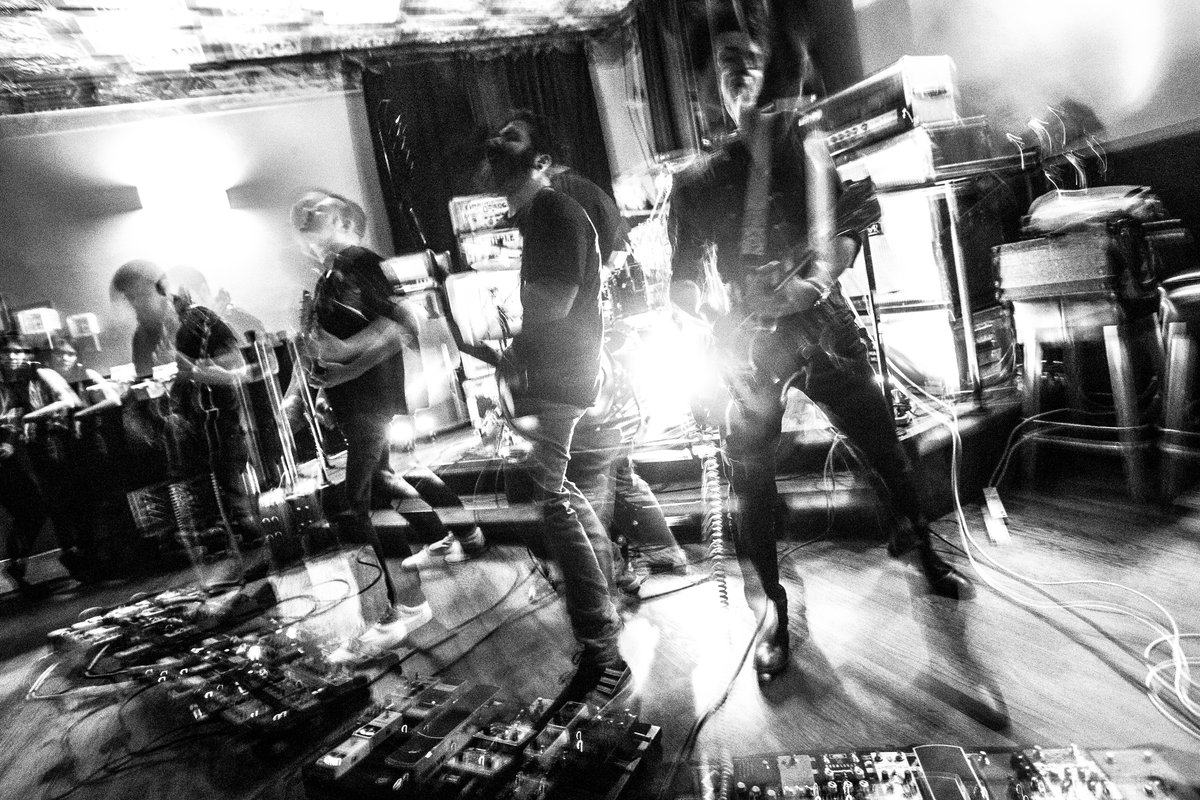 Glacier – “No Light Ever”

Glacier promise No Light Ever on their fourth massive opus, mirroring the human psyche while sticking to a mute but colourful expression.

Glacier are a five-piece from Massachusetts, dedicated to explore the crushing and monumental grounds of instrumental output. Their previous EP Though Your Sins Be As Scarlet, They Shall Be White As Snow; Though They Be Red Like Crimson, They Shall Be As Wool. unveiled a matured band finally finding their own sound, paving the way for No Light Ever, their most versatile, eccentric and longest release to date. Depending on how you count, this album can also be characterised as their first full-length.

I usually find it a bit concerning and odd when people describe instrumental music as ‘soundtrack-like’, mainly because the term feels demeaning, shedding off the value of the music itself. I strongly feel that unless there’s visuals or an actual film included, the saying is tremendously biased. What people tend to mean by saying that is that the music manages to create varying mental imagery, and that usually means that what you’re listening to succeeds to capture your attention, therefore being worth your while. Thus the music excels in execution and isn’t an unattached, random or lesser piece of a bigger entirety. So the next time you hear someone calling something a soundtrack, don’t take it literally or interpret it as such. Just listen.

No Light Ever is a hallucination-inducing trip deep into your inner self. It is a captivating, unrelenting album that preys on your comfort and lunges in when you least expect it, a chilling and massive creation that, weirdly enough, is best to be consumed on a warm, silent summer evening. I understand how that might sound extremely weird with the band being called Glacier and the record’s title being what it is, but there is a reason for this association. At this rate, it won’t take too long that all that’s left on this rock we inhabit are dead and deserted sceneries. No Light Ever as a title feels like it refers more to a profound view and the ultimate outcome, rather than to a concrete, literal darkness.

And as a perfect transition from that nice image, we’re moving on to the opening track “O World! I Remain No Longer Here.”, which starts with a few minutes worth of sludgy pounding and then tones things down for almost ten minutes before returning to form. It is a risky move to begin with the longest and overall most relaxed track; for the first few listens, the track also requires a lot more attention than the rest. Glacier incorporate actual dynamics amidst the compositional ones. For some, this might make it hard to keep track of everything when combined with the floaty moods and riffs. On the contrary, that also gives the album a good amount of replay value, though if it bothers you at first, it’ll probably bother you during the second time too.

“The Bugles Blow, Fanned By Hysteria.” has a similar structure, but advances more tangibly, as the guitarwork rejoices in western-ish flavours while the drum beats carry the song into its middle section, where a soft-toned bass takes the lead for a moment. The instrumentation is very clever on this track, giving the listener room for imagination while still staying in control. After the calm, there’s a random pause before the metal gears kick in. The song’s outro sees the band conquering some heavier realms, utilizing triplet beating and harmonious guitar leads, calling the likes of Labirinto and Autism to mind. Following an elongated fade out, Glacier take a significant turn towards open waters.

“We Glut Our Souls On The Accursed.” acts as the album’s main course. Being more jagged than the rest, it’s also the shortest, most approachable and straightforward track compositionally. The entire runtime acts as a crescendo, growing constantly until breaking into a noisy post-rock section. Weird, discordant note changes and the mentioned noisy feel distance this piece from the rest. This is also where I realized that the track order is more thought out than it felt at first. Suddenly the mood is overpowering and offers very little space for breathing for a long time. This change acts as a contrast to the song’s first half.

The following transition, as well as the first five minutes of the final track stay within this same sonic frame. Introducing exactly the kind of pressure and intensity you wouldn’t have expected, “And We Are Damned Amid Noble Sound.” feels almost suffocating. What started out as a beautiful dawning has now dipped into grim and lightless depths. This change reflects the band’s name quite well: a sight that appears so serene and calm starts to melt and crack, eventually vanishing into history.

After going through a steadier pulse, a bit of a random guitar solo, and an abrupt stop, you’re left with nothing. The album ends in a wall of distortion, much the same way as it started, but in a totally different spirit. Replaying the album makes you realize that it turns darker and bleaker with each listen, even to the extent where you have to take a pause and wait before getting back to it. Although there are some genre-related clichés and typicalites around, No Light Ever is an album of quality music. Glacier‘s course has been habitually improving, and I can’t come up with a good reason why it wouldn’t remain that way in the future as well.