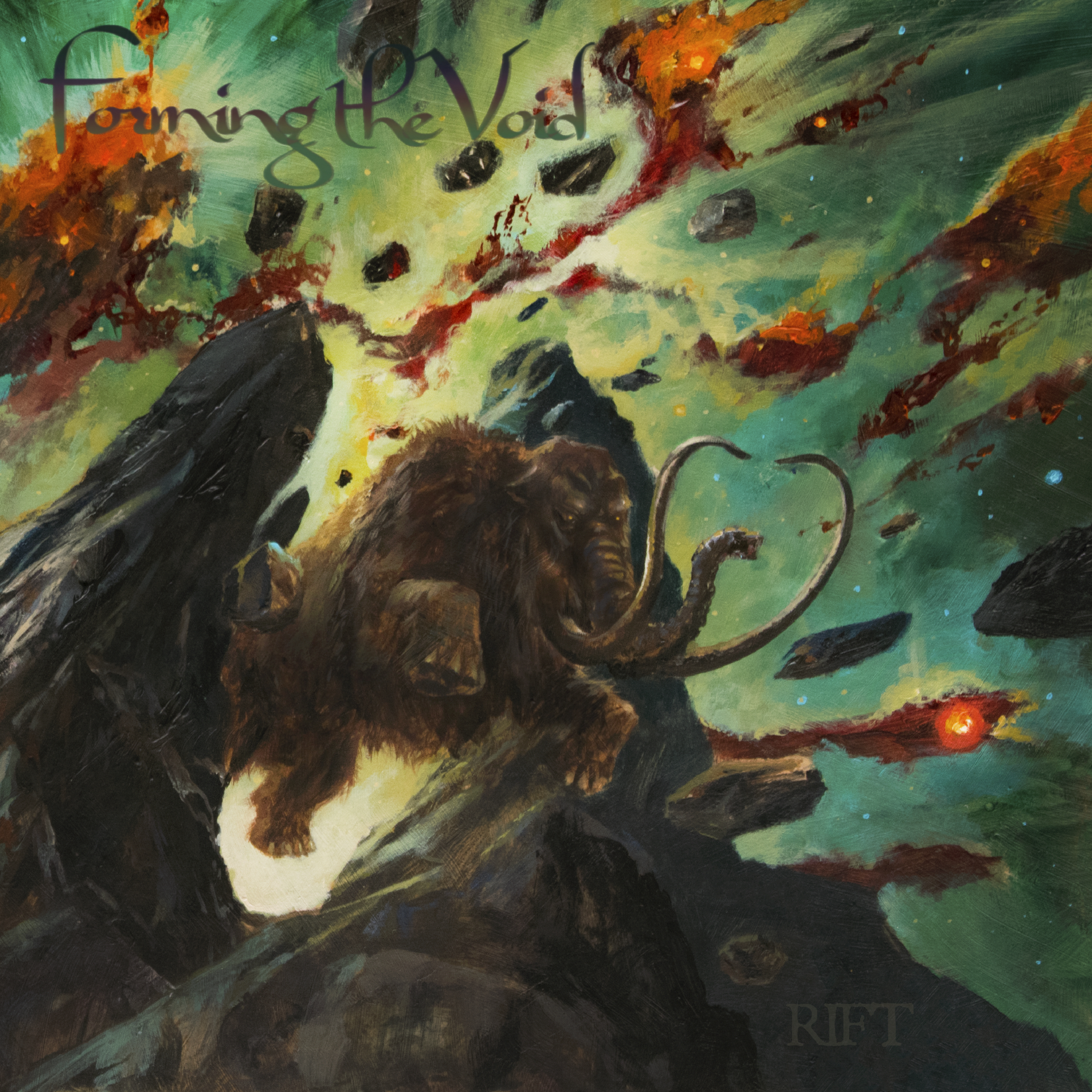 By David RodriguezAugust 14, 2018 No Comments

It took me a while to start writing this. I don’t really procrastinate when it comes to reviews; I tend to get them done pretty quick so I was a little concerned at first. It’s easy enough to say I really like Rift, the newest album from Louisiana’s Forming the Void. It’s easy to describe elements of the music that pleased me and made me really like it. So why the hesitation and loss for words? Mostly because getting lost in the band’s brand of spacey, heavy stoner-doom rock makes for a trying time. The quartet have been on my radar since their last album Relic, and if Rift is any indication, they’re not leaving any time soon.

There’s a rare magic in Forming the Void‘s music. Its huge, cosmic aesthetic is a formidable beast to undertake – much like the mammoth on the cover – but it’s not one that’s overbearing. Rift is completely fulfilling with very little in the way of missteps or wasted effort. In fact, the album gets the least interesting parts out of the way right upfront. I say ‘least interesting’ with some reservations because the first track “Extinction Event” isn’t a bad song by any means, but it does play things a little too straight compared to the rest of the album. The heavy riffing is neat, and I especially like how it still takes the time to melt away the marching rhythms to show a more spacious movement during the chorus.

Still, when compared to literally every other song on the album, of which there are seven total, it’s the album’s sole weak link. Everywhere else is a soothing journey through the starry oceans of space, with distant suns painting your body with light and warmth. Much of the atmosphere is built on clean guitar tones, utilizing a variety of melodies and approaches. Drums are sparse, but weighty. Vocals are epic in great harmony with the rest of the instrumentation. Everything has a nice coating of reverb to help produce a far-out feeling.

Indeed, Rift is a star tour unlike many others; a veritable planetarium of stalwartly stoned riffing. “On We Sail” takes a catchy approach with its wobbly guitar melodies and vocals that glide over the instrumentation. The hum of the bass in “Transient” coupled with plodding drums makes for a low-key stunning moment of calm. These two songs have more structurally and performative intense moments, but the differing tones don’t conflict with or betray the other. They weave in and out during songs with expertly crafted smoothness. This is also where you see the band flirt with progressive musical structure since pretty much every song builds on itself at least a couple times. Even when the songs are fairly straightforward for their duration like “On We Sail”, it’s not boring because the band knows how to write compelling, entertaining music and, frankly, that’s putting it lightly.

Perhaps now you have a better understanding why explaining this album eluded me for as long as it did. All these moments (and more; I didn’t even touch “Shrine” which is their ten-minute closer) establish Rift as a vivid monolith of expansiveness. Forming the Void astound with their second full-length. If you’re not in awe of its command of aural space, then its raw beauty likely shall captivate you in turn. Needless to say, I’m impressed. If you’re looking for heavy music that smartly incorporates the tenets of doom and stoner jams without falling too deeply into any genre clichés, look no further. This is a band you need to have your sights on.