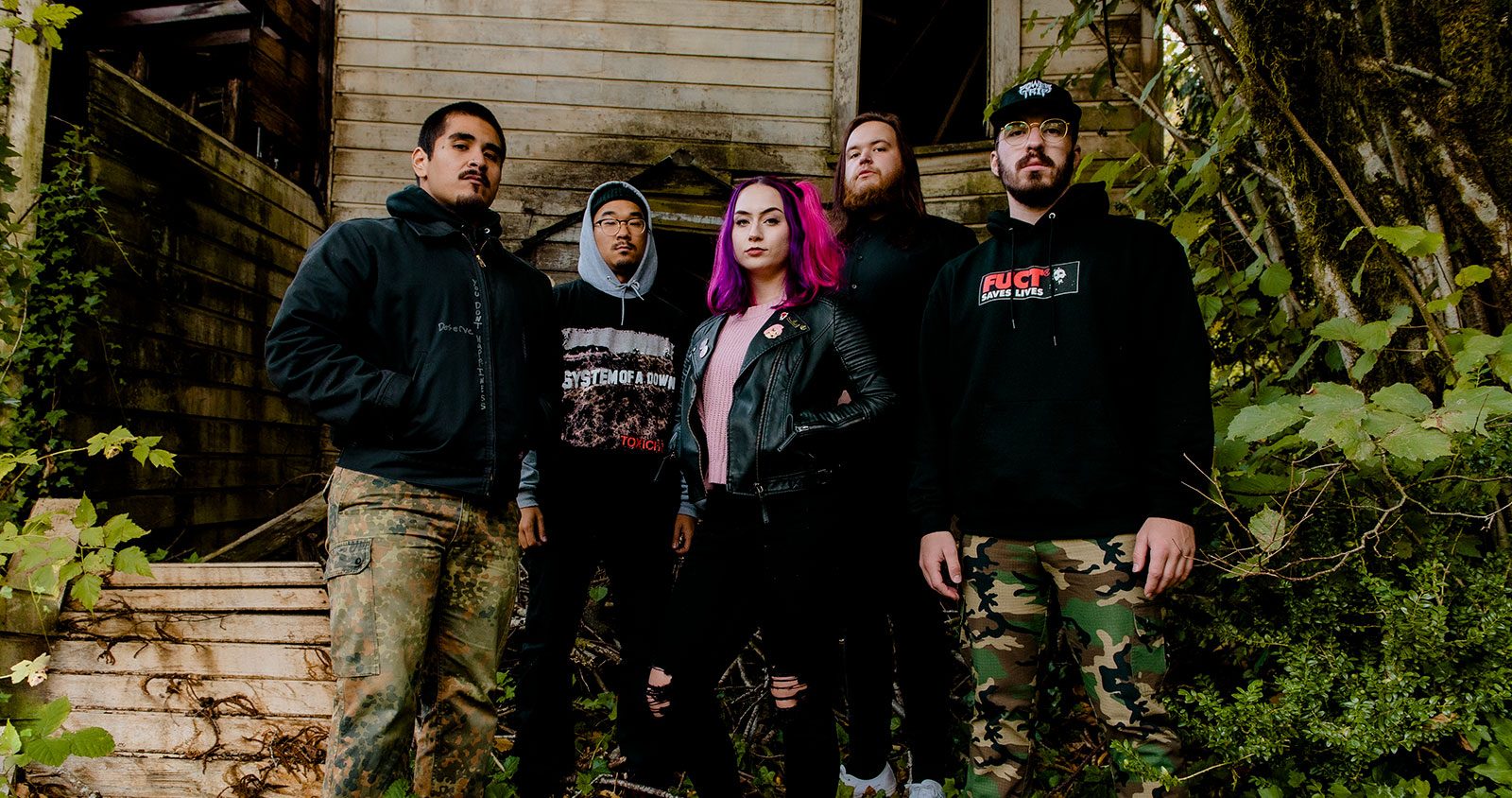 By Alex SieversNovember 4, 2021 No Comments

The debut album from Dying Wish steps right out from metalcore’s past, and (mostly) for the better.

The pavement-munching Fragments Of A Bitter Memory was released on October 1, yet Portland’s Dying Wish may as well have just walked straight outta 2006. Their fierce brand of throwback metalcore is so 2006 that As Blood Runs Black might even come looking for their riffs. Dying Wish are a new metalcore band that’s completely, obsessively informed by its luminous and lauded past. Of course, they aren’t writing metalcore to redefine it, nor to even really push the needle for the style. And that’s perfectly okay: that’s never been their intention.

Anyone coming to this band, or others like them, to hear fresh takes on this subgenre have utterly missed the point and are barking up the wrong breakdown. Literally zero of these metalcore revival acts from the last five years – resurgent peers like Renounced, SeeYouSpaceCowboy, END, Wristmeetrazor (awful name), Knocked Loose, and so on – are making unique moves. And you know what? I don’t care one iota, and neither does the audience that comes to them. If you’re someone who only champions new music when it’s original, then I guarantee you are the worst person in your friendship group.

What’s great about bands like Dying Wish, what works well about records like Fragments Of A Bitter Memory, is that those sounds and tones, that image and that aesthetic, are all nailed in a razor-sharp manner. It revitalises the current genre’s mood to how it once sounded and felt so many moons ago. It is always generic and brutal in sound but it’s also human and urgent in theme: that’s never once lost in the heavy tide of ass-beating mosh parts. Love the band or not, I don’t think anyone could realistically deny that Dying Wish haven’t captured exactly what they set out to do here – scarily well, in fact. As someone who heard and loved (and hated certain) bands from that particular era of core – hard, post, math, metal, and death alike – when it was all going down, this is an awesome, if totally unoriginal, blast from the past.

So no duh, there are breakdowns. My god, the breakdowns! A surplus of breakdowns that we’ve heard a million times before but still hit like a fucking truck, all lovingly ripped straight from the 2000s’ scenes. The production – courtesy of Randy LeBoeuf from Trade Wind and the Graphic Nature collective – bleeds between that modern crispness and that rough-but-discordant sonic character of yesteryear. Emma Boster’s venomous snarls are always animalistic; drummer Jeff Yambra perfectly times ride bell hits with bass drops for nasty pre-beatdown tension; wee-woo dissonant guitar intervals fire over thicker-than-molasses, heavily syncopated rhythm sections.

In addition to that, the unsurprising abundance of aggressively palm-muted chugging patterns from Sam Reynolds and Pedro Carrillo helps tick off the final box for the sort of metalcore Dying Wish passionately recreate here. By design, it’s a repetitive and sometimes one-note record but an extremely fun one at that. It’s also a blatantly angry record too, taking the vexation of their fantastic 2018 split with Serration to a whole new realm.

The revolutionist “Blood Laced Misery” is downright seismic in execution – a vehement metalcore attack on bigots, ICE bootlickers and racists for the suffering of minorities and Indigenous peoples. “Now You’ll Rot” features super ignorant-sounding squealies to make for one of the toughest songs Dying Wish have ever concocted, next to the short yet savage opener, “Cowards Feed, Cowards Bleed”. “Innate Thirst” has a pre-breakdown snare build-up rolling under spoken words, a move that’s as old as the hills, as are the double kicks that slow into single hits before the next dun-dun-dundun rhythmic assault touches down: but it all works!

Although, it’s not all crunch and dissonance. There are some sweet melodic leads and singing respites littered throughout the runtime, like on the heavy-hearted “Until Mourning Comes”, the closure-demanding title track, and the grim closer, “Drowning in the Silent Black”, as melodic vocal and instrumental layers carve holes into this record’s bleak patchwork – just when it feels like all hope is lost; just when the heaviness and aggression seem to become too much. Like everything else the band does, these are nothing new, but it’s a dynamic I do hope the quintet explore down the road.

However, maybe the LP didn’t need the Bryan Garris-featured penultimate track, “Enemies In Red“? A decent song overall, what with the Knocked Loose frontman trading screaming blows with Boster, its original release date when compared to this record is a few weeks shy of two years old. As much as I enjoy Fragments, the record is already a little bit much for this sound at its current length, “Enemies In Red” perhaps pushing it past that line of what was acceptable. Speaking of features, “Hollowed By Affliction” guests Tyler Norris from the aforementioned Wristmeetrazor. It’s a feature that stands out from the sole perspective of a vocal-tone contrast but doesn’t add much more to the track. Perhaps bigger fans of Norris’ band will appreciate it more than I did.

Unfortunately, a little too much importance has been placed upon the sound of Fragments, rather than the sentiments it expresses in its social media and music writer discourse. It’s a deeply personal album for Boster, in terms of personal anecdotes and political beliefs, that’s getting somewhat lost in the diatribes around metalcore (and hey, I did just do my fair share of that above!) For instance, “Cowards Feed, Cowards Bleed” sees Boster standing behind words of vengeance aimed at another over blood-letting instrumentals, declaring ‘The only remedy/My only therapy/Your greatest fear/Blood spilled.’ Similarly, “Enemies In Red” coldly eyes off our demons, both literal and figurative, showing them no sympathy in their final moments before death takes them: ‘No patience left/I’ve come to grips with your neck.’

During “Hollowed By Affliction”, Boster screams ‘Hell is burning inside my mind’, addressing the numbness they feel as a result of the shit they’ve been through; how it becomes their mask to hide behind. The ways in which mental illness affects not only the individual, but their relationships, comes to the surface on “Drowning In The Silent Black”, and not feeling like you can love again following painful experiences comes out during “Cold Hearts in Bloom”. Getting gaslit by abusers and how you cope with their transgressions is addressed on pummelling standout, “Severing The Senses”, or take another favourite of mine, the titular track, seeing Boster address an abusive stepfather – asking him verbatim where his love went, why he put the band’s frontperson through so much shit as a child with his alcoholism, and how there now stands no remorse for him: ‘Countless lives that you plaguе/A disease on the path to your grave.’

Fragments is absolutely a highly emotional record, as per “Until Mourning Comes”, about keeping a loved one’s memory alive following their passing. Yet, it’s never afraid to fight for its convictions. “Innate Thirst” deals with clout-chasers using various causes to artificially elevate their social status: ‘You don’t deserve your spot hеre/Your true face hides masked behind the columns.’ Earlier I stated how “Blood Laced Misery” is about crushing imperialism and colonialism (‘Your hatred runs deep/Bloodline stained with bigotry’), but it’s not alone in that unapologetic leftist theme, as “Now You’ll Rot” is a callout of police brutality, a call for institutional reform, and standing in solidarity with movements like BLM: ‘Cleansing the streets with the blood of the bastards/No peace until power is surrendered.’ With these words, Dying Wish draw a line in the sand on this LP against the shit they won’t stand for or abide by. I think – no, I know – that hardcore, metalcore, and whatever-core need a lot more bands like this.