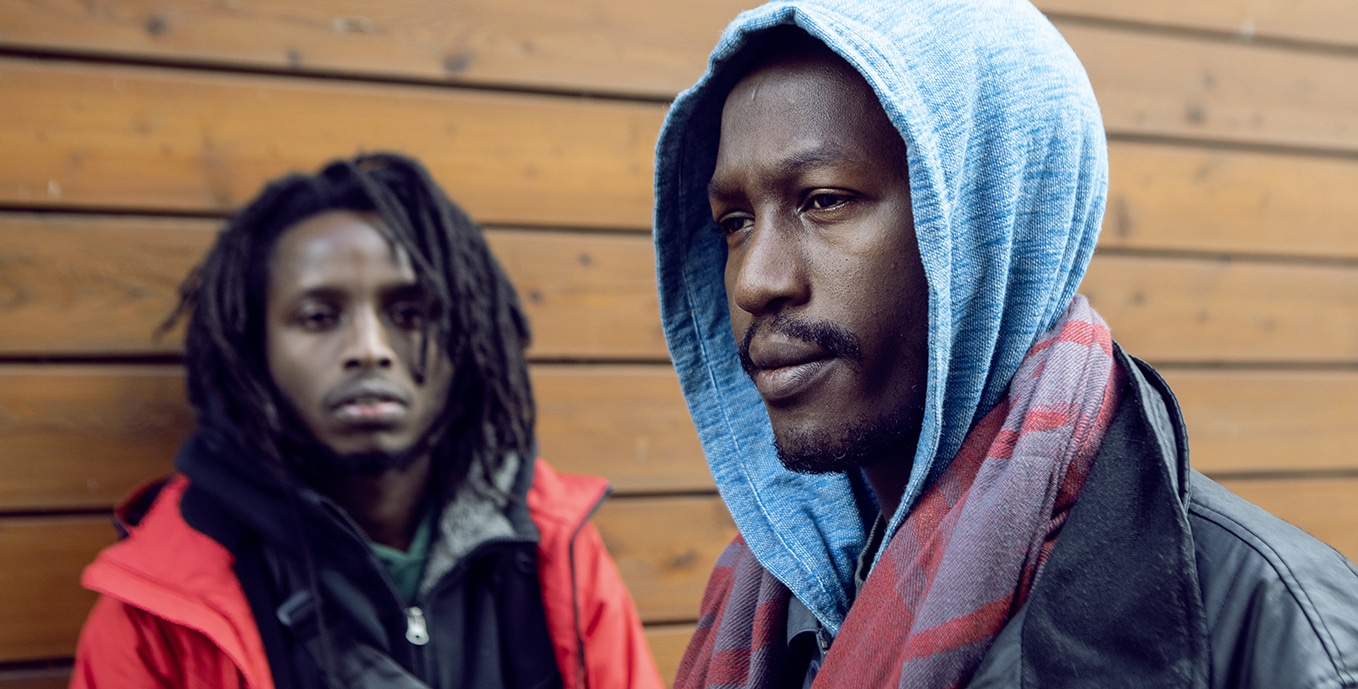 By David RodriguezAugust 29, 2020 No Comments

Duma, much like a murderous rainbow, represent a vibrant spectrum of sound and fury, if almost every sound contained within wanted you dead.

If this year’s main quest has been simply ‘survive,’ then my side-quest has easily been ‘find the most interesting and wild music possible.’ Is the quest done? No, probably not – we got four months left in this mother and I’m averaging at least one superbly engaging project a month. This time, I’ve been willingly dragged to the lands of Africa to visit Duma, a very promising duo from Nairobi, Kenya made up of Martin Khanja (aka Lord Spike Heart) and Sam Karugu both of whom have worked in the bands The Seeds of Datura and Lust of a Dying Breed (check them out, some great stuff there as well).

Their name means ‘darkness’ in Kikuyu, a Bantu language in Kenya and also the largest ethnic group in the country, and whether you learn of the name of the group or listen to a song first, whatever came second suddenly makes a lot more sense upon that realization. To describe what Duma is comprised of would look similar to a record store owner’s listing of genres they have in stock. Breakbeat, grindcore, industrial, death metal, punk, trance – the sonic pedigree on display here is gluttonous to say the least, like a seven-course meal was blended up and force-fed to you.

Please beware flashing, strobing lights on both of the YouTube videos in the review

Feral and complex at heart, the duo still craft their music in such a way to give it a great uniformity, and it’s all terrifyingly emotive. “Lionsblood” heralds forth a primal transformation, the music marking the occasion with industrial thumping and hollow production. It soundtracks what feels like a ritual where man shifts to beast and gives chase to its prey. A lot of the music on Duma‘s debut feels fear-stricken, chasing game (whether human or animal) into a darkening horizon where dusk threatens to render it sightless and therefore helpless.

This is felt most intensely on “Kill Yourself Before They Kill You”, a song that makes good on its back-against-the-wall tone with stuttering drums and bellowing vocals that seem to call forth death itself. A vibrating synth permeates every other bar or so in the song, mimicking a nervous system’s fight-or-flight telegraphed response as it jostles your brain to make a move – any move – to preserve yourself.

Duma drift effervescently into glitchy and corrupted noise constructions, and this is where their music is the most eclectic. “Corners in Nihil” is striking, figuratively of course, but the walloping production begs to differ as it treats your ears like a speed bag to punch. Lord Spike Heart is fierce and unrelenting, only stopping to build suspense and agitate further when his shrill cries and chants return to the mix. All along, the buzzsaw guitars (or maybe synths, hard to tell) perforate your defenses to allow a full-scale invasion of deft and rowdy sonic expression. There’s even a little bit of a Death Grips-esque kick in “Uganda with Sam”, which has some of the most rapid-fire hi-hats I’ve heard recently and a dreary atmosphere that cakes the song in moaning bass.

They’re not stylistically similar enough for me to make this comparison without great explanation, but Duma have achieved in giving me what I was greatly lacking from Gesaffelstein‘s latest work. Listen to “Omni” and the rhythmic, synthy sounds, like raindrops exaggeratedly splashing against a surface. The tempo runs well past anything comforting, charging onward with machine gun-like thuds in the beat, and the whole thing just reeks of malice and anxiety when you throw in the vocals and additional skittering production that sounds like little creatures surrounding you in the dark. It’s eerie, but also the most cleanly danceable track on the album. Just don’t slip on the blood at your feet.

Even as you hear the trap influence in a track like “Omni” or the more synthwavy influence in “The Echoes of the Beyond”, that familiarity – that comfort – comes with a price. The more you listen and insert yourself into the story that this music forms in your head, you realize, with increasing and creeping dread, that the price would be your life should everything leave your mind and become temporal. This music, as experiential as it is, is better left on your turntable, phone, or computer, much like the movies and shows that make us confront monsters (again, beastly or human), contort our own forms with body horror, or drape us in increasingly possible scenarios of pre- and post-apocalypse. Still, for Duma, this album represents a beginning, not an end, and it’s one I’m all too eager to see the exposition play out with.

For as unhinged and intense as things get on Duma‘s debut, it’s all absurdly coherent and calculated. Elements coagulate into a pool whose genes are vast and ancestral, drawing just as much influence from traditional African artistry and lore as it does futurist dystopia, mining the bones and viscera from cybernetic music’s more hellish corners and malevolent experimentation. It’s afrofuturism if it contracted a computer virus; it’s the ship in space overrun by a hostile lifeform unknown to humankind. Most importantly, it’s abrasive and anachronistic without losing itself in the fray. Music could stand to be more forward-thinking in this way, but for now, I’ll gladly take Duma‘s progressive and resolute attitude as they make music exactly as they want.