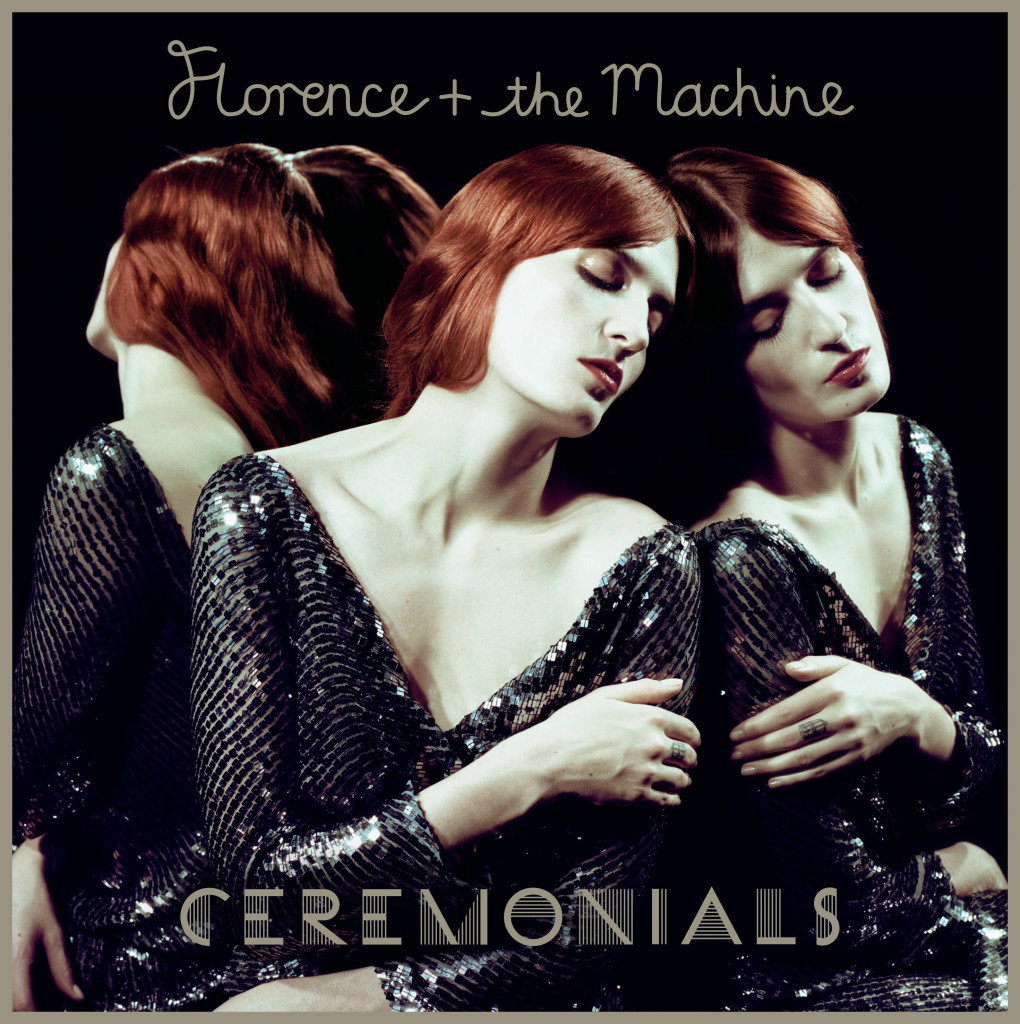 A SCENE IN RETROSPECT: Florence + the Machine – “Ceremonials”

By Dominik BöhmerAugust 29, 2020 No Comments

Not everything that comes from the underground is an overlooked masterpiece that needs to be handed its due place in the spotlight; not everything that has gained mainstream approval is a watered-down piece of market-oriented consumption music – I think this is an axiom we can all agree on, at least to a certain extent. We’ve had our fair share of both sides of this particular coin on A Scene In Retrospect, and as the pendulum once again swings towards the latter in this episode, I kindly ask you to leave your presumptions and hasty judgements at the door as we head into our discussion of Florence + the Machine‘s 2011 breakthrough album Ceremonials.

I honestly feel like the genius of bands like Florence + the Machine often goes over my head until I sit down and listen to them again. Perhaps that has to do with my initial history with the band – when their debut album Lungs was an absolute sensation among hipsters and indie kids, I expected it to be some cliché pop artist that managed to sneak their way into the ‘cool crowd’. To be fair, I was a cynical teenage metalhead, so I refused to accept anything that wasn’t heavy. Nevertheless, when I finally listened to the band, I knew I had to kick my ignorance to the curb.

Florence + the Machine’s Ceremonials is such a gorgeous follow-up to Lungs, and the band definitely continues in the right direction. The entire collective has an innate ability to write music that can capture the strongest emotions or evoke a sense of excitement and glee. While tracks like “Shake It Out” and “Spectrum” take a more pop-centric approach, they still maintain an immersive sound that is common throughout their entire discography. On the contrary, songs like “What the Water Gave Me” and “Seven Devil” build from almost nothing into pieces that fully utilize each member of the ensemble.

It seems like the entire band proudly use their talents to make Ceremonials a phenomenal record. With that being said, none of them seem to try and outshine other members. They work together entirely as a unit that focuses more on songwriting abilities than technicality. In addition, Florence Welch’s voice is breathtakingly stunning, and her mesmerizing vocals add so much texture to the band’s style. Her incredible aptitude lands her as easily being my second favorite Florence in the entertainment industry, right after Florence Pugh (I mean, have you seen Midsommar?).

I’m biased towards the intensity of a lot of the percussion on the record. As a drummer, I’m constantly craving drums that sound huge and powerful in music. So many records don’t capture the realism of the feeling of a huge drum getting pounded. Ceremonials breaks loose and manages to use heavy percussion to make each song sound so much fuller and also primitive at times. I think that percussion is what draws me to songs like “No Light, No Light” and “Only If for a Night”. Florence + the Machine have mastered how to lead to a climax by using different musical layers, especially through the usage of percussion.

Revisiting Ceremonials reminded me just how beloved Florence + the Machine are. I was actually supposed to see the band perform live in Philadelphia about two years ago when they toured for their recent album, High As Hope. Unfortunately, I was unable to attend, and I feel like I missed out on a truly magical experience. There’s something very special about the way that the band works together to make beautifully crafted pieces of art, and I honestly feel like they continue to amaze me throughout their career. Ceremonials may be a sophomore album that had to follow up the masterpiece that is Lungs, but I do believe it holds its own as an incredible album from the last decade.

Full disclosure: I have not followed the upward trajectory of Florence + the Machine since 2012, and am hence not familiar with anything that came after Ceremonials. But I do remember the waves their debut Lungs caused in 2009 – after all, the vocals gushing out of Florence Welch’s lungs could send glass-shattering ripples in all directions.

For all its strength, Lungs felt like a Florence Welch solo record, with the Machine not being actually present, which is why when two years later Ceremonials came out, it finally felt true to the band name on the cover – Florence + the Machine. Do not get me wrong, Welch and her voice are still central to the music here, but the thundering tribal drums and the orchestral flourishes of the harp and violin ensure that it is much more than just a pop singer’s solo record. The loud, booming vocals are accompanied by equally colossal percussion and synthesized drum beats.

It does not take long to see what makes Ceremonials such a powerful album, as the beats and harmonizing backing choir on “Only If For A Night” put the listener in a state of a hypnotic trance. Welch’s voice is the perfect cherry on top, as she manages to scream the lows and highs with equal force and grace. While often compared with fellow British singers Kate Bush and Adele, Welch never goes for an intimate, heart-tugging sound like them, but rather chooses to scream her emotions from atop a hill. Even when delivering a perfect ballad in “Never Let Me Go”, she exudes an air of confidence while singing lines like ‘And it’s over and I’m going under / But I’m not giving up, I’m just giving in.‘

Since the album’s release in 2011, the loud, foot-stomping pop anthems of songs like “Shake It Out” and “Spectrum” seem to have become a staple part of Florence + the Machine‘s setlist. While it is easy to imagine getting fatigued with a continuous barrage of such high-flying songs, the inclusion of songs like the occult-sounding “Seven Devils” and the folksy “Leave My Body” ensure that Ceremonials stays a thoroughly engaging experience.

As mentioned at the beginning, I did lose touch with Florence + the Machine post-Ceremonials, as their work became even more radio-friendly to my ears, and my preconceived notions of such a change came into play. Based on Ceremonials alone, though, it is impossible to deny the impact their music has had on the legions of fans they have amassed over the past decade.

Alright, story time: I’m not a fan of Florence + the Machine. I could never really connect to their music, although I always respected their rich sound and Florence Welch’s distinct and powerful vocals. But yeah, their music never grabbed me, despite me trying several times. My s/o on the other hand is a big fan. ‘Okay‘, I said to myself, ‘I can live with that. Could be worse, right?‘

Some years ago, my s/o and I visited our first festival together, after 5-6 years of being in a relationship. Thing is, while music takes an enormous place in my life, she’s way more casual about it, and naturally, our shared interest for music was relatively small. I took her to several shows over the years, and she always kept an open mind and found some bands she enjoyed a lot and still enjoys to this day. Snobbish as I tend to be when it comes to music, I never expected a ‘vice versa’, so when we visited said festival, I approached it more as a nice weekend for the two of us, with some treats for me in the form of The Internet, Badbadnotgood, Moses Sumney, and a bunch of other artists. One of the main reasons for my s/o to attend this festivals was the headliner of day two, none other than her beloved band Florence + the Machine. When the time came, my girlfriend burst into crowd and displayed a rather unusual euphoria. I excused myself, and went to the stairs that framed the ground in front of the stage. I sat down, had a smoke and watched the crowd go crazy when the band entered the stage. Kinda skeptical and tired from the day, I just hoped that it would be over quickly.

What followed were nearly two hours in awe. The band, led by Welch’s magnetic charisma, exuded a raw, authentic energy, and lifted every song they played to an empowering anthem. This group of artists enjoyed being on stage, enjoyed performing those songs, and they enjoyed doing it together with the crowd. It was just absolutely sensational.

After the show, my s/o came over to me, out of breath, with a red face and a big smile. She knew me well enough to tell how impressed I was, and when we drove home, we listened to Ceremonials and smiled like idiots. I don’t revisit Ceremonials often, but every time I do, like right now as a I write these words, it fills me with joy and a childish sense of wonder and awe, appreciating the magic of the moment, getting washed over by greatness from an unexpected place. And after all, this is a major part which makes art so important. Keep your mind open – you’ll never know when something magical might strike you.

What are your thoughts on/experiences with Ceremonials? Are you a fan of Florence + the Machine, and if so, what’s your favorite album of theirs? Do you have any records you’d like to recommend for inclusion in A Scene In Retrospect? Leave it all in the comments if you feel like sharing!