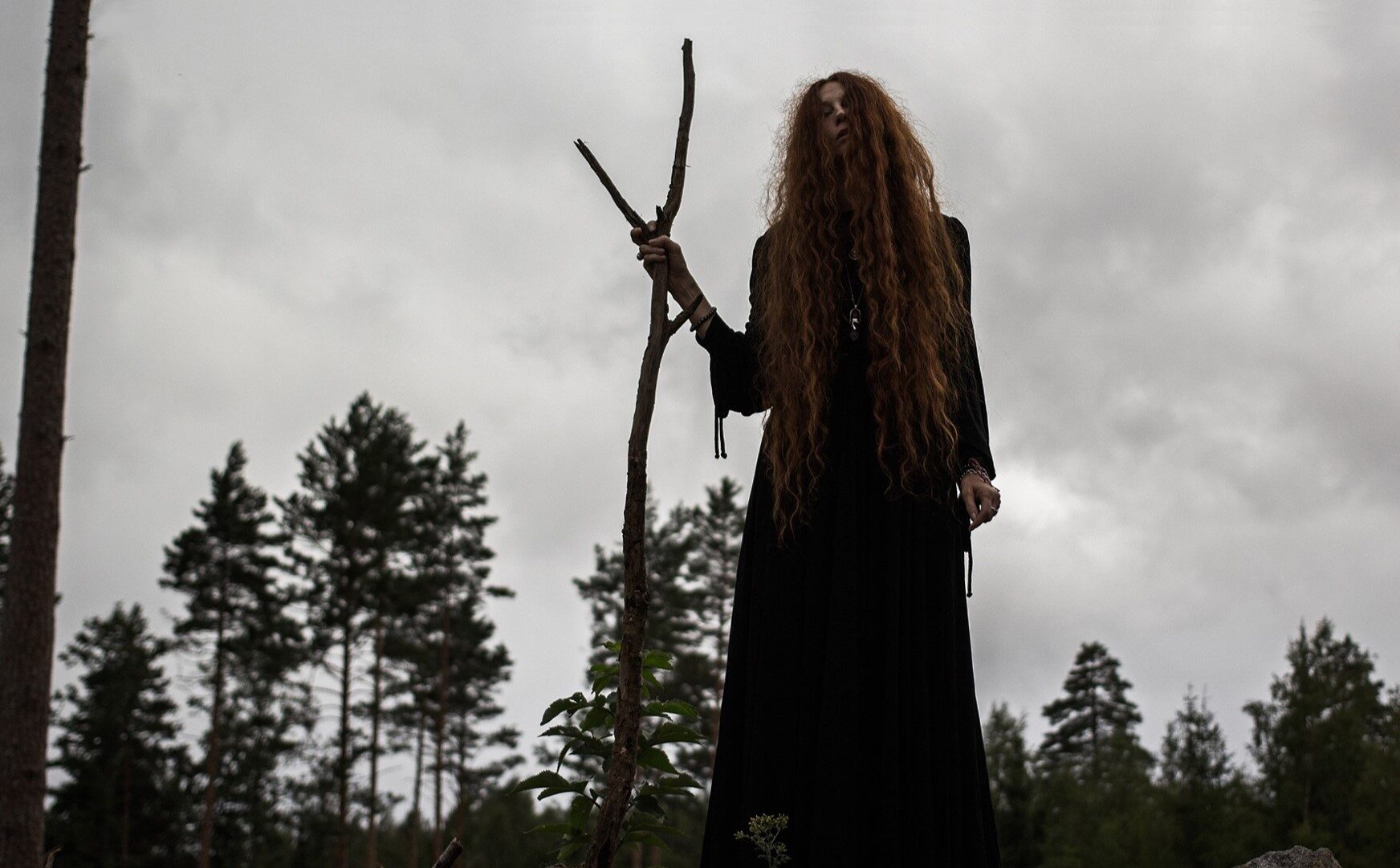 Darkher days have returned, as the ethereal English songstress bewitches yet again with her haunting doom folk: prepare for the unleashing of The Buried Storm.

Darkher began life a decade ago as an idea that crept forth from the creative cranial recesses of Jayn Maiven – a singer, guitarist, and composer hailing from Northern England. The self-titled debut EP that followed in 2013 secured Maiven considerable attention, with a second EP and subsequent first full-length, Realms, seeping out from her new home at Prophecy Productions.

It’s now been six years since 2016’s Realms brought us a more sizeable offering of Maiven’s musical melancholia, and The Buried Storm provide even further evidence of her capability; each of the eight songs was written, recorded, engineered, produced, and mixed by Maiven herself, painstakingly crafted by the enchanting songstress’s proficient hand. Aside from her own musical input on lead vocals, guitars, and bass, the wider orchestral sound of this undoubtedly nocturnal record is rounded out by the assistance of Lambert Segura on violin, and both Arianna Mahsayeh and Melanie Chaplin on cello.

Similarities can be drawn to the entangling, dark dissonance of the much-lauded 2020 collaboration between Emma Ruth Rundle and Thou, or the recent album from Converge and Chelsea Wolfe – both also wonderfully received among our ranks. Personally, I find Darkher‘s latest offering to be shrouded in a far greater sense of atmospheric foreboding and suspense. The Buried Storm also exemplifies an album best experienced from start to finish: each song is readily anchored to its predecessor while also weaving itself just as willingly into the next, forming an audible sense of narrative and flow that takes your prisoner for its entirety.

“Sirens Nocturne” lays out a melancholic opening duet between Maiven’s washing melodies and pizzicato strings. If you’re new to Darkher, the sense of brooding can be startlingly immediate – both unsettlingly evocative and eerie all at once. What we have here is a sonic vessel of both beauty and profound, unhindered darkness in an irresistible soundscape of voice, string, and ambient guitar wash – like that of a siren bidding you come close, unaware of the peril awaiting. Darkher‘s official website speaks of the album’s ability to, ‘conjure iridescent cinematic scenes in which it becomes hard to tell whether there lies beauty in darkness or if it is the other way around’, and that’s a very apt way of putting it.

It is only at the opening track’s end that percussion enters the fray, as an earthen drum introduces us to “Lowly Weep”. It’s a grounding that bows out shortly after a striking cello ascends to the foreground – provided by Ludvig Swärd (of ambient folk project Forndom). Maiven herself describes it as, ‘a dark lullaby that speaks to the sorrow within… As with the death of winter and the rebirth of spring, it journeys from bleakness into a stirring entity of strength, renewing a connection to the spirit.’

Again, you sincerely feel that growing sense of tremendous loss as the song’s power peers ever more above the surface: simple drums, ringing chords, and an army of voices all march to Maiven’s darkly angelic whisperings. Then, just when you feel it has reached its end, haunting tremolo guitar presents slight respite before caving to the eventual explosion of long-lasting, stirring cacophony that Maiven spoke of. A meandering close finds guitar lines that take eons to dispel, and the multitude of parts ultimately drift out of reach, leaving us stranded.

“Where The Devil Waits” encompasses a more full-bodied dance, with the line, ‘Here I bury the storm/In blinding light’ serving as a key point of inspiration for the album title. Once again, though the instrumentals are overtly sinister and sombre, its message has a glowing core to guide us through: ‘The song relates to the shadows within and the attachments to what can become destructive. It is about empowerment and light,’ Maiven explained recently.

Moving further in, the folk overtones submit themselves to a gnawing, romantic urge on “Love’s Sudden Death”. Its biding sense of doom remains in the gradual, prevalent noise – propelled by a recurring drum beat and a closing call-and-response passage in the vocals that casts images of someone conversing with their tormented inner spirits. By contrast, “The Seas” – with its acoustic plucking, apparitional melody, and the gentle pizzicato layering – is stunningly beautiful and a standout track for me – a ghostly track that captures the chilling essence and treacherous, untold depths of a fluid body of obsidian. It reminds me of O’Brother‘s “Spill on the Carpet” – not nautically themed in and of itself, but with very similar musical moods.

“Immortals” opens with clean electric guitar, channelling the nature of its moniker with pulsing drums that carry the swells of Maiven’s refrain, ‘Immortal are we’. The record’s guest drummer Christopher Smith ensures that cymbals chime alongside the thud of toms and snare, gathering gradual intensity while ringing, rhythmically repetitive bodies of distorted guitar drive us home towards the demonstrably unsettling finale of “Fear Not, My King”. Steadily incorporated layers – contributed to by Daniel Land on background vocals and additional guitar – pull us deeper, with an air raid siren ringing out a symbolic death knell deep below.

By the record’s end, there’s every likelihood that the thematic storm has, in fact, buried you deep in its darkened embrace and refuses to let you resurface, instead guiding you back to start all over again. Nobody would blame you: many of the eight tracks here revolve around motifs, refrains, and chord patterns that repeat and imprint themselves on you. Importantly, though, this is done without ever becoming monotonous. Instead, textures and tints draw in and out like the tides, embedding themselves firmly in your mind as they construct impactful tunes that keep you planted between discovery and despair.

A core appeal of Darkher‘s latest album lies in its ability to create such stark contrast. Upon first listen, the harrowing, spectral compositions appear to indicate a pervading hopelessness throughout. However, plunge deep enough into the tempestuous waters of The Buried Storm‘s messages, its intentions, and you’ll find quite the opposite – a reward for submission to the fullness of this otherwise sinister record, obscured beneath darkened textures that cloak its true, enrapturing power. Darkher days are upon us, and Maiven’s future has never looked brighter.