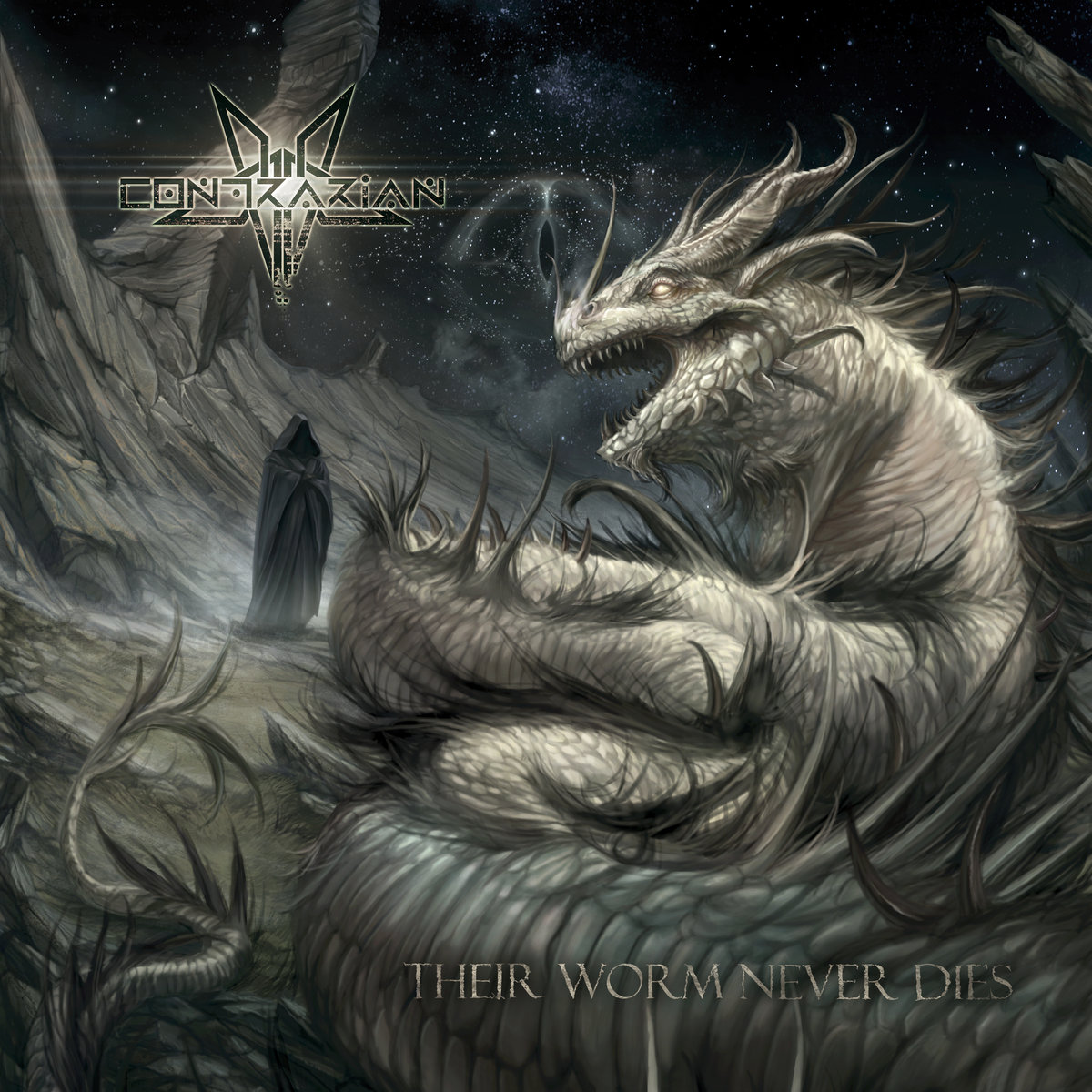 By David RodriguezMarch 16, 2019 No Comments

Contrarian‘s Their Worm Never Dies is a fun, progressive playground for a modern death metal legend and his talented buddies to wreak some havoc.

Contrarian caught my attention when I heard a single of theirs, “Exorcism” specifically. It’s a good song! I’ll be talking about it more later, but first, some context: I didn’t even know about this band, let alone that George Kollias was the drummer and vocalist for them until I heard “Exorcism” and did some research. I’m a big fan of Nile and have been for years, but seeing that Kollias was branching out into more complex and progressive stuff was such a treat for me. I decided to burrow into their latest album, Their Worm Never Dies, expecting some great, fun progressive death metal and got pretty much just that!

The band dive deep into a fantastic concept on this album about a cursed man and a legendary dragon called Whiteworm. The Bandcamp page for the album teases whether Whiteworm is the aforementioned man’s savior or tormentor, and leaves it up to the audience to decide. The way this music plays out – co-opting technical, progressive death metal – leaves a lot to the imagination. Like, this album is a full-blown epic with the right mood. The 90s prog metal aesthetic services cheesy and fun concepts like this so well, and the appropriately aged production doesn’t hurt either. It’s an oft-trodden comparison, but just think of the likes of Death or, more recently, Horrendous and you’re at least halfway there.

It’s not long after you hear the dulcet and calm tones in the intro for “Exorcism” that the track erupts into a riff-driven fury, where I can clearly see people cloaked in black mounted on dragons flying across star-pocked celestial skies, permanently darkened by black magic or perhaps the curse that is integral to this story. Kollias’ vocals are rather one-note, adopting a harsh growled style of vocals fitting for the style of music, but still work well here as a narrator or speaking as a character (honestly, it’s hard to tell which most of the time).

The music itself is electrifying throughout and this carries over into what I imagine the story entails. Scorching guitar solo with on-pace drumming and frivolous bass licks? That’s a dragon dogfight with lots of fire, immolated wizards, and other setpieces that I imagine would sate Game of Thrones fans. The more pensive parts like the gentle, lower tempo guitar intros and interludes that build a bit more atmosphere act as breaks between the action much like any other metal album would.

My favorite moment on the whole record is the intro to “Among The Mislead”, which is Kollias literally doing whatever the hell he wants. I lack the technical lexicon to describe it in detail, but it’s a couple bars worth of highly proficient drumming with a well-timed double kick drum blast that just feels good. It’s quite proggy, and might not have worked as well on a Nile record, which makes me happy that he has Contrarian as an outlet to explore this sound and really show the range and extent of his talent.

This speaks to the whole nature of Their Worm Never Dies. Whether you’re talking about Kollias, or any other of the talented people on here (Jim Tasikas and Brian Mason are very capable axmen, and bassist Ed Paulsen is absolutely no slouch with his often melodic low-end). It’s a progressive playground for riff nerds like me that value a guitar passage getting stuck in our heads. The structures are fun and a little dramatic to go along with the dragon-filled, action-packed fantasy.

I mean, just look at the cover art. It just screams fun and cool, so much so that I’d like it airbrushed on a van. This is something you can and should judge by its cover because however fun Their Worm Never Dies looks, it plays even more so. If you’re hankering for some delightfully classic progressive death metal, Contrarian will do you know wrong. May their worm, or their passion, never die.