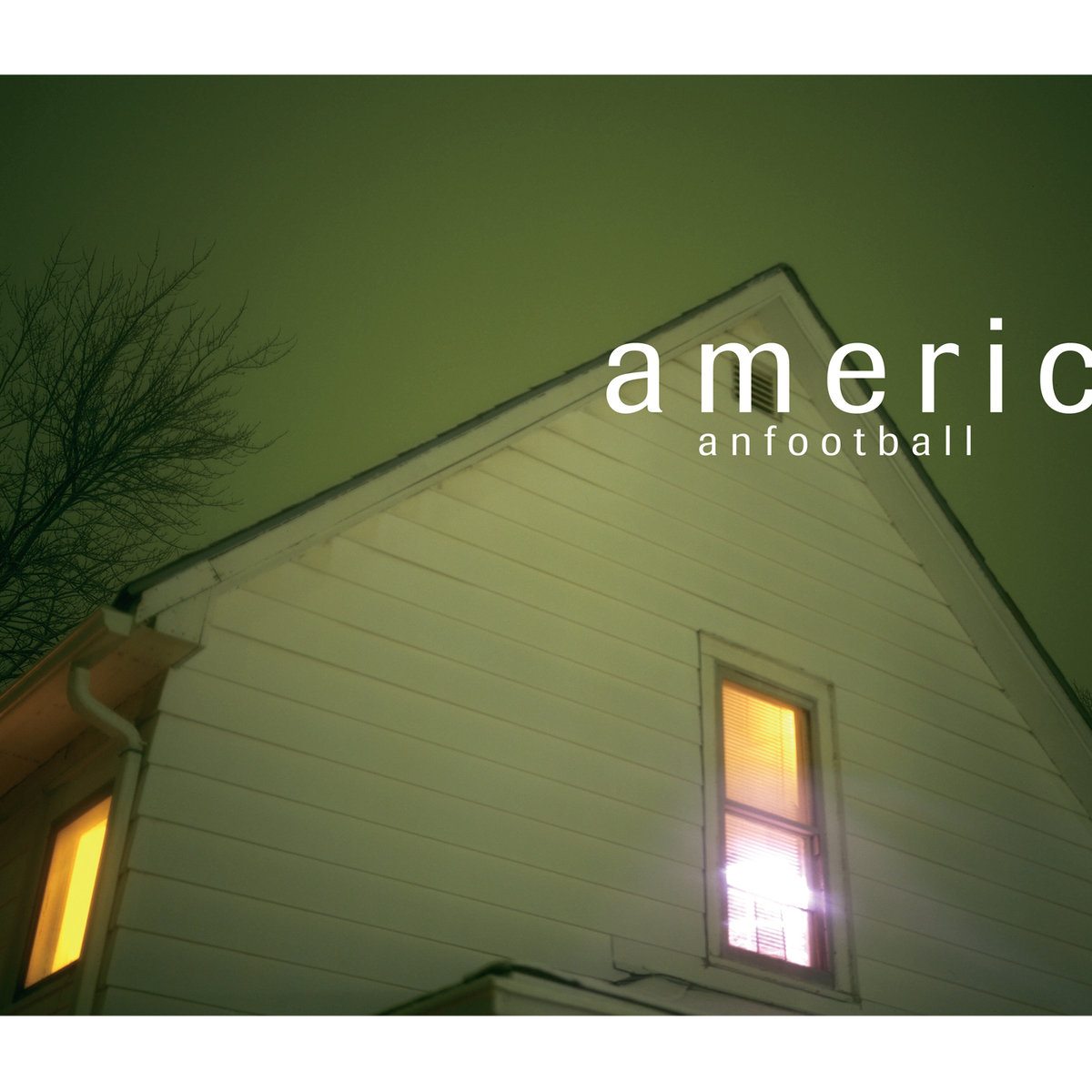 Patron saints of midwest emo and math rock progenitors, American Football have become a staple of the more emotional branches of the indie rock circuit over the years, leaving a mark on many aspiring musicians and aching teenagers’ hearts alike. Those same teenagers are now adults, having grown up alongside their heroes, who up until their eventual reunion in 2014 weren’t even aware of their own status.

With only six more days to go until the release of their fantastic third full-length album, we thought it would be a great idea to take a look back at their humble beginnings. For this, I have assembled a team consisting of EIN PR/social media manager Inter, editor David, and staff writers John and Sam; they will be sharing their takes on this milestone record in the following. Please enjoy!

American Football’s self-titled debut LP is no longer the hidden relic of modern rock music that it perhaps was to those discovering it in the wake of the digital streaming revolution. Seeing marginal success in its time of origin amongst enthusiasts of the then-budding genre of emo, LP1 poignantly, and possibly by accident, defined a generation and helped lay the foundations for a rich succession of like-minded music.

Opening track “Never Meant” has been beamed into the mind of every sadboy and sadgirl throughout the modern world, whether they know it or not. Its instantly recognisable mis-start and in-studio chatter, made redundant by a deceptively simple-sounding but ultimately mathematical guitar riff that carries the rest of the song. The lyrical themes explored in the LP’s opener are elaborated upon, and fleshed out throughout the remainder of the track listing.

Exceptions to this constant berating of the listener’s emotional threshold can be found in the album’s instrumental tracks that allow momentary breathers from the anguish and angst. Written off of the back of Mike Kinsella’s involvement with other pioneering groups Cap’n Jazz and Joan of Arc, LP1 further solidifies the ever-increasingly possibility that Kinsella is the closest thing to a deity we may have.

There isn’t a band in the modern climate of emo music and pop punk that doesn’t owe a debt to this band. Highlighted perhaps by Paramore’s Hayley Williams featuring on the group’s upcoming, also self-titled LP. People from all over the world have visited the midwest of America just hoping to get a picture of the house seen on the record’s cover art. LP1 is an album of few words and much sonic experimentation, but ultimately, its unassuming and highly relatable voice continues to reverberate through the many worlds of music, unwavering.

To get hype for American Football‘s release of LP3 next week, the guys and I will be covering American Football‘s classic self-titled LP. And yes, I’m calling it a classic, because that’s exactly what it is. It is perfect mixture of indie and math rock brilliance. At the time it was released in 1999, it didn’t get much traction, and shortly after it was released, American Football broke up. But it gathered a cult following. And lucky for us, they reunited and released their second album in 2016.

This album is perfect bad relationship/break-up music. With the majority of the lyrics being about relationships gone bad, it’s the ideal album to listen to when things aren’t going well, especially the opening hit “Never Meant”. Such an incredible depressing yet beautiful song about wishing a relationship never happened!

The musicianship of the band is incredible too. Mike Kinsella covers the vocals as well as guitar and bass on the record. He’s joined by Steve Holmes on guitar and the Wurlitzer, and Steve Lamos, who shows off his jazz influence on the drums and also plays the trumpet, which adds such a cool element to the music. You can definitely hear their influences in bands like Minus the Bear‘s and Pinback‘s writing.

One of the cooler parts on the record are the two instrumental songs “You Know I Should Be Leaving Soon”, where Lamos shines on the drums, and “The One With The Wurlitzer”, where Lamos’ trumpet playing is just as emotional as Kinsella’s lyrics.

Although this album will turn 20 this year, it still seems as pure and innocent as it was when it first came out. Clean and clever guitar tapping over incredible jazz drumming is a wonderful formula for American Football, one which they’ve since perfected!

Every great story has its beginning; sometimes, this beginning already gives you a glimpse of the journey your are about to experience. It may be a bit rough, but that’s the appeal. In this case, American Football‘s first album cemented a really meaningful musical connection for me, which they continued with LP2, and reached new heights with their upcoming LP3. Nevertheless, there is this little extra something about LP1, something which screams spending time with your friends at the end of a hot summer day. Your only problem was that you didn’t know what to make of the tension between you and that beautiful girl you saw the other day, but you’re riding your bike up a hill, into the horizon.

‘I’m thinking about leaving and how I should say goodbye/With a handshake, or an embrace, or a kiss on the cheek, or possibly all three‘

While Mike Kinsella wrote his own stories, they were always my stories as well. Lyrically, there is no surprise that this album resonated with so many people. The soundscapes it creates, in combination with the words, paints a world of his own, a world in which many of us lived at some point. This bonding through relation is one of the key elements which made LP1 such a precious and nostalgic experience. And, of course, there is probably nothing in this world which comforts me like Steve Lamos’ trumpet does.

2019 marks the twentieth anniversary of this album, and I’m so thankful for every second I spent with it. It’s a big part of my musical identity, and I’ll be forever grateful what it gave to me during all those years. Maybe it’s a bit pathetic, but it gave meaning to my sadness from time to time.

I have a weird, very cursory relationship with emo. Growing up, I just thought it was bands like My Chemical Romance and Thursday. That’s true enough – it’s the mainstream, pop punk side of the genre that swept through the aughts like a fleeting, unrequited love. I wasn’t really into it. Since I now love bands like Turnover, it’s about time I made effort with American Football, the progenitors of poignancy.

I’m not completely foreign to this softer, more natural sound – I’ve been a Coheed and Cambria fan for years and like their first album a lot, which was basically space emo. When I hear the dulcet guitars, understated drums, and distinct, almost homespun vocals, I vibe with it. For all its candid and heart-rending musings, this type of music isn’t particularly sad to me, but it hits home in a raw way. The way Mike Kinsella sings ‘Imagine us together/relatively stable (and tentatively able)‘ in “For Sure” is especially reminiscent for me, since emotional and financial stability are basically my kinks at this point.

The music is at its most punctuated when it throws different things at you. LP1 has prominent trumpet performed by drummer Steve Lamos. This, along with the song arrangements, creates this form of warm and gooey emo-jazz that’s remarkably palpable. “The One With The Wurlitzer” has – you guessed it – a Wurlitzer piano, which is an interesting choice to pair with music like this, but its gentle tones meld well with the trumpet and guitars.

Maybe my past apprehension to the genre predisposed me to being really picky with music like American Football’s. It’s downright silly to deny their ability and impact on fans and artists alike. I definitely appreciate this album and band, and going back to LP1 is reason enough to look forward to their next offering.

That’s all for now! Nostalgia is a one-way street, sadly, but us sharing our opinions on/experiences with American Football and their music with you hopefully allows us to open a new avenue of remembrance, namely a dialogue between our team and our readers. What do you associate with this record? Are there any stories you connect with it and want to share with us? Leave it all in the comments below, or under the Facebook post you most likely got here from.

See you all back here in fourteen days for another belated look at a beloved classic! Until then, stay safe out there, and as always…