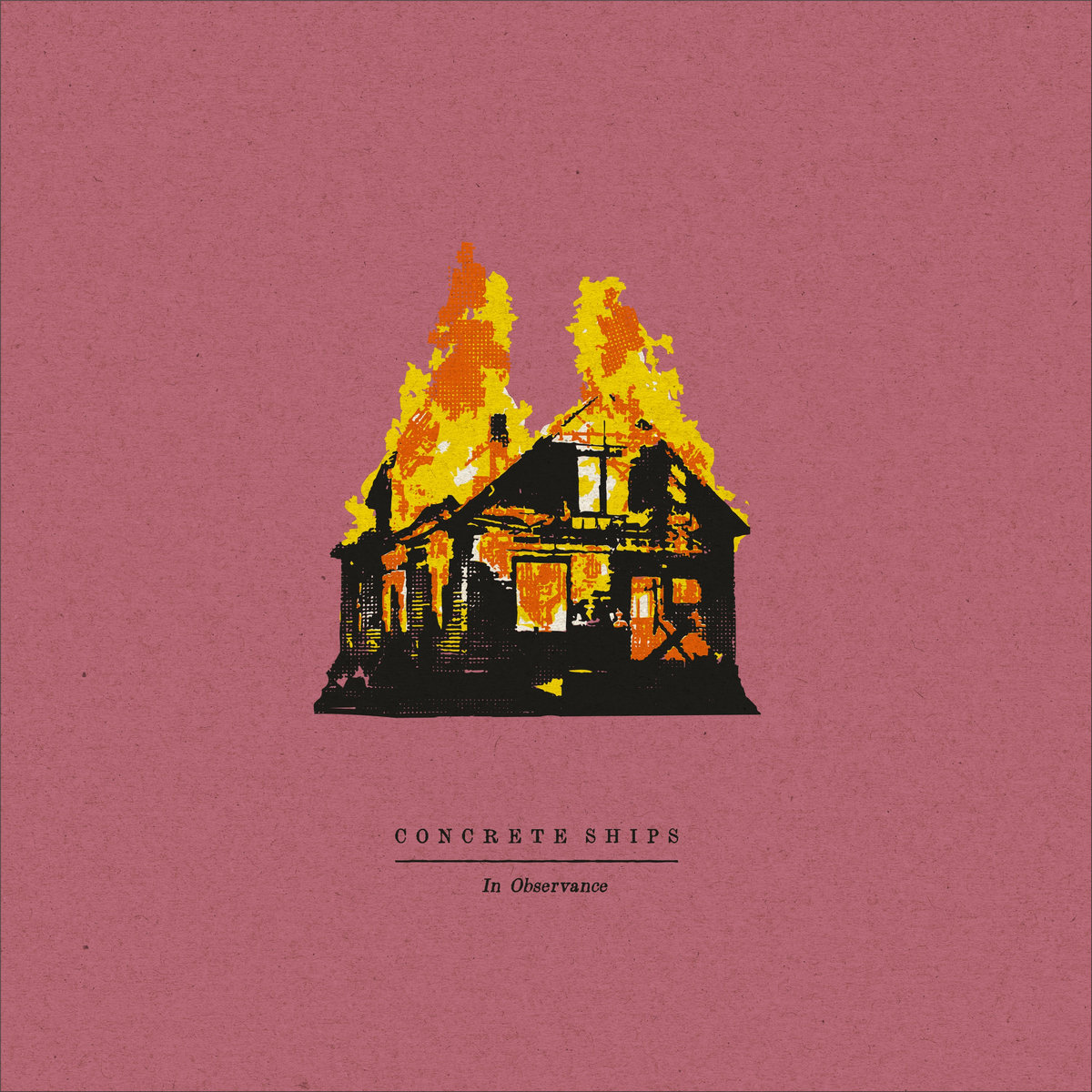 In Observance is a very appropriate title for Concrete Ships‘ new album – the question is, are you observing it or is it observing you?

I sometimes get into a bit of a pickle with my band. We play prog metal – everything is specific, meticulously thought-out, and precise. Don’t get me wrong, I love that, and I love the people I play with. We never do something technical just for the sake of it; the emotion behind it is still paramount. But sometimes I wish I could just smash out a big, dumb riff and that be it. I recently joined a band that I admire much more than my bandmates do, and with this new band, we do just that – I’ll play some ridiculous, slow, disgusting riff, and we’ll just jam that until we have a song. We’re all fans of IDLES, Daughters, Swans – we like things to drag on without resolve. The eternal blue-ball, as it were.

Concrete Ships were first described to me as kind of Daughters-y, so I was keen to check them out, and their new album In Observance gave me the opportunity to do just that. To be honest, I was a little disappointed with the opening track “Flotilla” – not because it’s bad, not at all! I like the song, but the vocals were just a bit too similar to Daughters‘ Alexis Marshall. And even though I love Daughters, if I wanted to hear something that sounded like them, I’d just listen to them. I still think it’s a cool song, and it has plenty of attitude, but it just didn’t blow me away. Luckily though, that is my only criticism of In Observance.

By contrast, the next track, “A Record Of Ancient Matters”, won my heart instantly. There’s nothing complex about it – it feels like something my new band could come up with if we had more patience to develop ideas and a bit more LSD, and it’s just… cool. It has a great balance of sick, heavy riffs, a wonderfully drawn-out, bass-driven psychedelic interlude, and a very Converge-esque ending with plenty of delightful dissonance. Delays and reverbs are used and manipulated just right, and as a bass player that prefers solid bass playing to showy noodling, the bass on this track is just ideal. It’s just an overall great track, building and building, and then it just – ends. I dig the shit out of that.

“Clouds” is another total banger. Something about its main opening riff is so satisfying – I don’t know if it’s just that heavy nod to Daughters in the production, or the powerful chorus lines of ‘This is the point the clouds fall down/They fall to our feet, they fall with no sound‘, but this song had me from the beginning. Its middle section rises and falls steadily, like the chest of a nightmaring sleeper – it’s long, but it’s involved. I don’t get sick of anything on this album, but “Clouds” and “Vibration White Finger” grip me the most.

“Vibration White Finger” is so cool because it just has such a dark, fatalistic vibe to it – it’s almost entirely just one bass riff, with the vocalist chanting, over and over: ‘Can he rest now?‘. The vocals layer and overlap, meld and fluctuate. The simplicity of the song only emphasises its power, the lamenting, dissonant guitars in its middle tumbling over each other, clamouring to be heard over the second repeated lyric of ‘He is dead‘. I also enjoy how live the bass and drums sound; it creates something so organic. Nothing is too much in this song, it’s all just right, bare and reverberant like a tomb – chilling. I was trying to paint when I first heard this song, and I just couldn’t – the atmosphere of “Vibration” had pulled me in so far that I found myself staring blankly out the window at the surly clouds instead, and felt that time had stopped; no breeze in the trees, no cars on the road, just me and Concrete Ships.

I get that same feeling from “We Never Were”, possibly one of the least Daughters-inspired songs on the album, but perhaps the most Converge-y. I just adore its main riff – it makes me think of rat skeletons and rotting crows. The bass playing is, for once on the album, not restrained in the slightest; he’s going for it. And, speaking of going for it, so is the vocalist. “We Never Were” sounds charmingly raw, but it needs to be to get the attitude across. The guitar laments and moans and wails its way through the song, and everything about it is beautiful, and tragic, and honest.

Look, In Observance is not complicated. It’s pretty simple, but in a very calculated, sophisticated way. I didn’t expect to like it as much as I did, but I really like the big riffs, the weird spacey sections that go on too long, and I definitely like being screamed at, whether it be vocally, or by dissonant guitars, or by the absence of anything melodic at all – it’s all good. All of In Observance is good, and it’s definitely an album I’ll show my bandmates. They will love this.