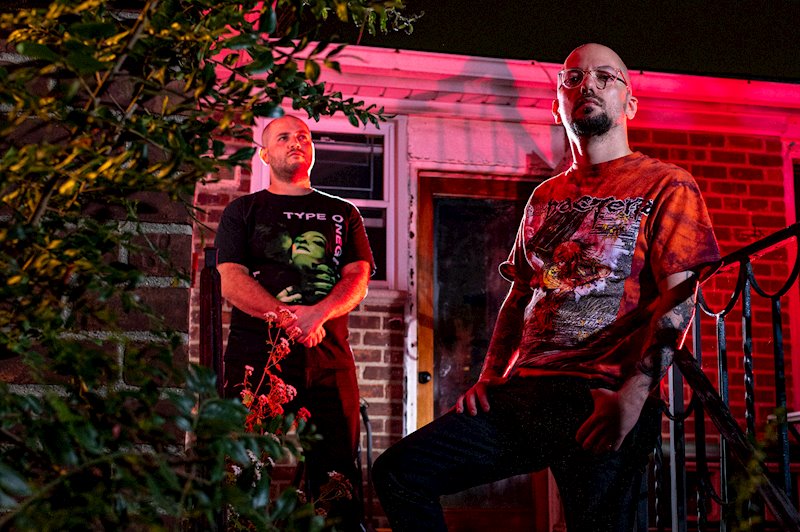 Chain Gang Grave. Good lord, where to start? The New York City outfit embrace the DIY lifestyle once held sacred by their forebears in pissed-off 1970s UK pubs or now-legendary lower Manhattan clubs. The group, currently unsigned, record music at home, handle most production duties themselves, and utilize co-founder/multi-instrumentalist Andrew Lanza’s artistic talents for many of their album covers.

Chain Gang Grave apply this individualistic expressionism to their music as well; a jaunt through the group’s lean back catalog reveals a clear appreciation for noise punk aesthetics, but with generous helpings of post-punk, heavy metal, sludge metal, doom metal, death metal, and no wave. The kaleidoscopic lens through which the band filters their ‘noise’ means analogies, no matter how contrived, fall completely flat. If I must attempt, I’d say the group sound like Acid Bath‘s Yankee cousins, Gorefest with the exact opposite production sensibilities, or perhaps Lightning Bolt if they dropped out of RISD, moved to Brooklyn, and excised the math from their systems.

Let’s be more direct. On Cement Mind, tracks tend to consist of sequences of chord progressions that batter the listener in rapid succession, with one haymaker riff thundering away for a solid 75 seconds before making way for another. These progressions are impressively dense thickets of noise: gauzy cocoons of Lanza’s deeply buried, Gira-like shouts and squealing guitars intertwine in a snarling caduceus over Jason Markowitz’s throbbing, woolly drums.

Riffs sprout from the seething aural mass like ever-multiplying hydra heads. These aren’t just buried-under-distortion, Golden Snitch, ‘I think I heard it?!‘ noise rock almost-riffs, though – in another faithful shoutout to old school New York punk rock ethics, lead melodies define and distinguish song sections within and across tracks.

Take “A Touch of Evil”, which sports a thudding caveman jalopy of a heavy metal refrain. Lanza struts on the fretboard with cool confidence, dive-bombing into licks that echo out of pre-Talking Heads CBGB before boomeranging back to the safe confines of the almighty riff. Once satisfied they have squeezed enough juice out of this desiccated husk of a rhythm, the band set their sights on new prey, twisting what at first appears to be a foreboding build-up bridge into a rabid, feverish vamp.

When one riff falls to the floor, another quickly sprouts to take its place. If the project sounds disjointed and unfocused, rest assured that the final package is tight. Do not mistake Lanza and Markowitz for avant-garde anti-formalists like abrasive, noisier contemporaries Neptunian Maximalism. Rhythm and lead sections are arranged in tight concert, and while the vocals bay and wail in slightly off-kilter rhythms, Lanza’s shouts serve as a sharkskin accent piece, lending plenty of space for instrumental performances to swirl and bloom.

To describe the album in exhaustive detail would misconstrue my own read on Cement Mind. This is an LP of moments, or ideas of similar tone ligated to one another and called songs. To expect a flowing, logically constructed package from Chain Gang Grave would be like expecting a novel from Pablo Neruda.

Given this is a Halloween cornucopia of riffalicious treats, each listener may glom onto different passages just as I have my own bits and pieces that I keep returning to. The sludgy breakdown on intro track “Cement Mind” is, academically speaking, putridly disgusting, and could very ostensibly be the soundtrack to Tony Iommi‘s nightmares. “Fever Dream” mesmerizes listeners via hypnotic sequences of Markowitz’s unflagging kitwork and Lanza’s cyclical, labyrinthine leads, punctuated ever so briefly by a positively volcanic guitar hook that alights for just long enough to shake loose any old fillings or poorly fitted crowns in your molars.

Chain Gang Grave do feel a bit constrained by the MP3. You get the sense that you’d be better able to appreciate the riff squadron in a live setting; the distorted guitars that self-consciously open each track could instead act as palate cleansers between sonic progressions. From a bird’s eye view (bird’s ear view?), the record listens like a live jam sequenced with one eye closed and a ruler held up for perspective.

The underbaked production brings the usual suspects of positives and negatives, and different listeners may appreciate this according to their own tastes. On Cement Mind, Chain Gang Grave occasionally feel like Cerberus leashed to a post. Whereas a raw black metal band might utilize blurry soundscapes to craft palpable moods of isolation, chaos, fury, or confusion, Chain Gang Grave’s lo-fi production mixes poorly with truncated tracks that abut one another uncomfortably. The unfiltered organic nature of the music here might be better suited for an uninterrupted live recording (or better yet, a live show), as any mood an individual track conjures tends to shrivel up rapidly when a track ends after just three minutes of carnage.

Ultimately, though, tracks are spunky, digestible, and re-listenable, and my appetite is strongly whet for more music from Chain Gang Grave. Despite my gripes with its production and medium, Cement Mind is invigorating and honest. It revives old school rock ‘n roll and punk rock motifs, but retools them in completely original fashion by pulling from about a dozen genres, serving up the whole dish with a sizable degree of attitude and belief. Final answer: this record is as refreshing as it is utterly pummeling, and I can’t wait to catch a live performance somewhere in the future.