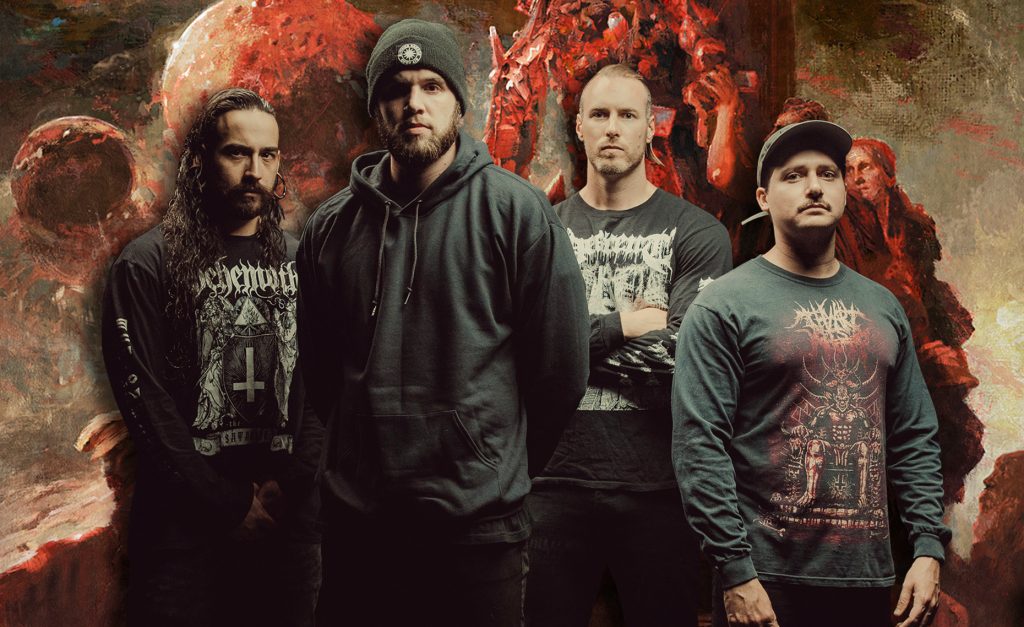 Aversions Crown – “Hell Will Come For Us All”

Hell Will Come For Us All marks Aversions Crown‘s ascension to top-tier death metal, delivering beastly sonic violence with an eye on strong songwriting.

I’m going to start by just getting this out of the way: if you’re a dedicated fan of everything death metal, a lover of the old-school Floridian bands, tech-death, blackened death, deathcore, and the various other deathly manifestations of the metal genre, then you’ll almost certainly love Hell Will Come For Us All, the new album by Australian band Aversions Crown. If you’re a death metal purist who’s avoided the band because of their previous dalliances with deathcore and so-called ‘alien-core’ (big no-nos for many of you), I’m relatively confident you’ll still enjoy this LP. If all these terms and labels mean little to you, but you find yourself intrigued by the theatrics implied by a genre with ‘death’ in its name, then you couldn’t have asked for a better entry point to test the waters in 2020 than this album. With their fourth outing, Aversions Crown have crafted eleven conceptually interwoven tracks of brutally precise and catchy death metal that sees them cross a maturity threshold seemingly out of nowhere.

I’m not the biggest death metal fan, although I do spin it from time to time, and I’ve enjoyed Aversions Crown for a while now. Previously, they opted for a sleeker, more digitalized sound than many of their contemporaries, while fundamentally playing the same style of music as the wave of deathcore acts that emerged alongside them back in the early 2010s. Ascending, furious lead work with a vaguely middle-eastern touch, machine gun double bass attacks, and breakdowns were staples of Aversions Crown’s sound. As the band’s sound developed, the vocals in particular widened to include more range, including mid-ranged barks and the rapid fire – almost rapped – growls made famous by Phil Bozeman of Whitechapel. In fact, Aversions Crown sounded to me as though they had lifted the template of their sound from Whitechapel’s “Make It Bleed” and processed it through a spacey tech-death filter. On Hell Will Come For Us All, however, it’s clear they’ve become more ambitious, crafting a work of considerably greater quality.

In retrospect, I should have seen this coming given the album’s cover art. Ditching their usual colorful sci-fi illustrations in favor of a muted, oil-painted demonic nightmarescape, it’s evident the band are going for a different tone this time around. A casual listen doesn’t reveal a huge change to their core sound; it’s still technically proficient, bludgeoning death metal. A closer listen reveals something else…little alterations and experiments that have been applied to the formula, rendering a far grander and more serious result than anything they’ve attempted before. Be it the subtle, chanted cleans on single “Born In The Gutter”, the light-handed choral elements on “Paradigm” and album closer “The Final Judgement”, the tension-building tribal build-ups that call to mind a ritual sacrifice on “Scourge of Violence”, or the occasional atmospheric passages such as the one on “Sorrow Never Sleeps” – the changes suggest a different attitude, rather than a complete overhaul of the band’s sound.

It seems my observations reflect a conscious decision taken by the band. Reflecting on the tone and nature of the songs, guitarist Mick Jeffery had this to say in a discussion with HEAVY magazine: ‘I think the songs are… and I know everybody always says it…but I genuinely feel the songs have matured. There’s a lot more structure; a lot more hooks in amongst all of the brutality. It’s more polished and the songs complement each other as well.’

He’s not wrong. Aversions Crown have always been technically proficient, but this time it felt like the arrangements were put front and center. The production sounds less processed, fuller bodied, and more ‘organic’ (courtesy of producer Will Putney, who really knows how to make things sound big). The breakdowns, while still there, take a backseat to the songwriting; the vocals are truly ferocious, and glide across a variety of ranges seamlessly. I’ll admit that during my first dedicated listen, I didn’t realize that the album was the band’s first to feature Tyler Miller on vocals. For what it’s worth, I did note down during my listen that the vocals sounded bigger and better than ever. Miller is a beast, and truly complements the band as their new vocalist.

I’ve noted a lukewarm reaction from many longtime fans towards the two singles released off the album, citing a shift away from the spacey sound of old towards something more closely resembling Thy Art Is Murder and Fit For An Autopsy. Although the comparisons are fair, I believe that as a complete body of work Aversions Crown maintain their signature style, namely the blisteringly unreal drumming, urgent middle-eastern-inspired lead work, and rapid-fire vocal delivery. If you’re a skeptical fan, I do advise giving the whole album a go before making up your mind.

I’m usually won over by artists who excel at aligning their execution with their vision, and in this case, Aversions Crown have smashed it. They set out to mature and focus more on their arrangements, and in doing so succeeded in elevating themselves from a proficient scene band to serious modern death metal contenders with no other challengers this year so far. If you were hoping for a massive reworking of their sound or a thrilling death metal boundary pusher akin to what Rivers of Nihil accomplished with Where The Owls Know My Name, you will be disappointed. If you’re looking for a top-notch – albeit vanilla – death metal album with shades of hardcore (either as a fan of the genre, or someone looking to broaden their musical horizons), then Hell Will Come For Us All delivers many times over.