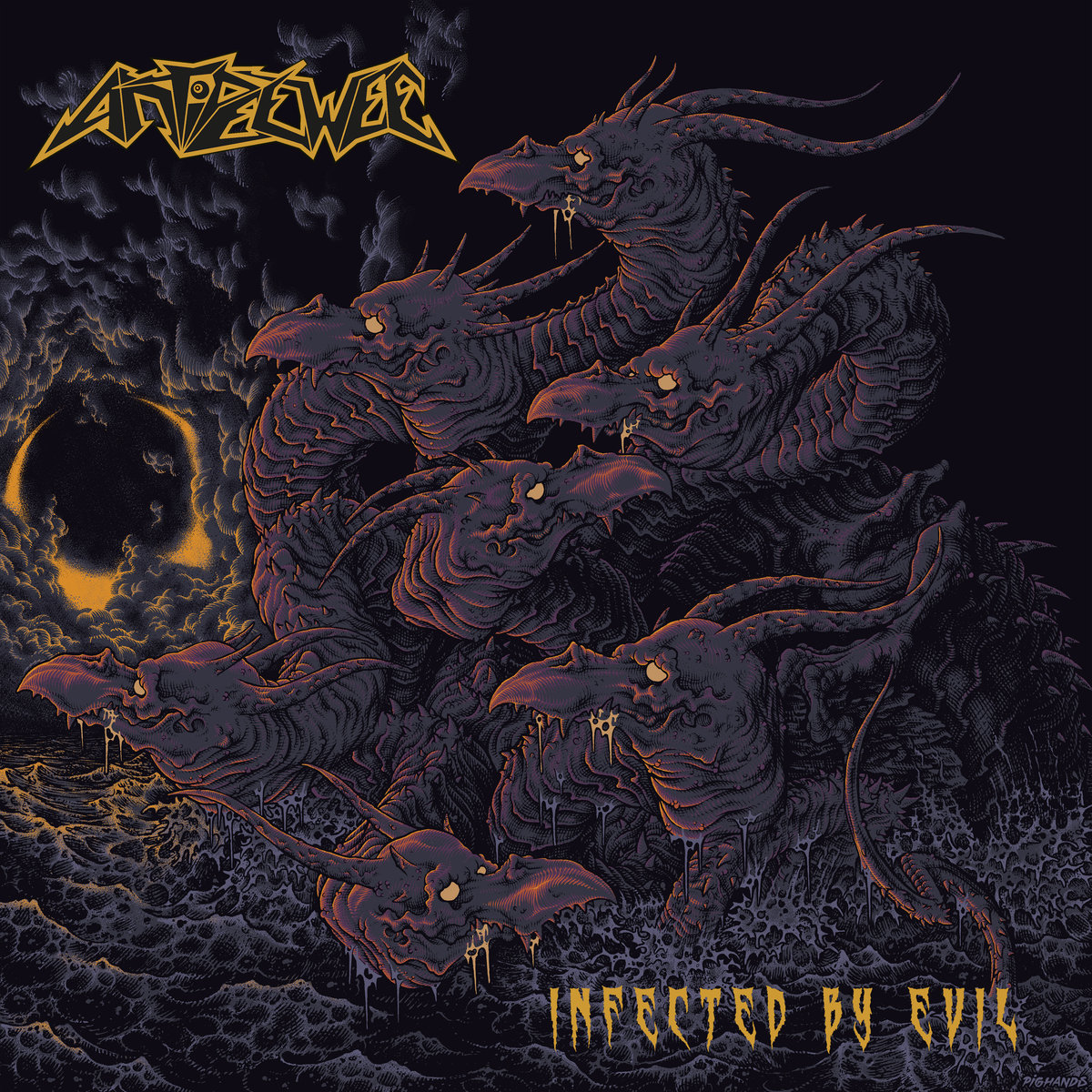 Germany continues their reign of thrash with Antipeewee‘s Infected by Evil, an appropriately sinister, riff-heavy, technical take on the genre.

So, I’m pretty sure that the underground heavy music scene in Germany is mostly sustained by thrash metal. They’re pretty good at it and have the pedigree, seeing as they birthed part of the genre with bands like Sodom and Kreator being members of the Teutonic metal movement. Lately, we have bands like Traitor taking up arms and bringing the genre to the forefront with modern sensibilities. Enter Antipeewee, cut from the same cloth with a little twist. Their new album, Infected by Evil, is true to its name, imbuing their hearty thrash sound with some sinister themes.

Infected by Evil is a bit more than meets the eye at first glance. Of course you’re getting your daily requirement of riffs, solos, punk-infused drum rhythms, and gang vocals (oh man, the gang vocals). There’s also a subtle atmosphere built with elements not typically seen in hardline thrash metal that I appreciate. “Symphony of Doom” has a demented, screeching violin solo by Esther Meyer that’s quite fitting for the song. “Buried (No Way Out)” has an ambient intro that sets the tone for the song’s theme of tomb raiding gone wrong. The high energy of these songs (and the rest) are no doubt a focal point as I’ll soon talk about, but when the album bothers to take a short break (not often, admittedly), it’s not boring and still has tricks to engage the listener during these moments.

As for the flashy stuff, well, this is thrash so you know there’s some bound to be some fast and frenetic guitar work. “Hideous Fate” opens with a powerful ascending melody that settles into a chaotic spree of double kick drums and technical guitar soloing. “Dagon” is appropriately wicked with its tone and riff selection. I could honestly list attention-grabbing moments from every song, which means there’s no shortage of entertainment throughout this album. Every song slays and doesn’t feel wasted. Gang vocals are present all over, mostly during choruses. You can’t help but s̶i̶n̶g̶ shout along to your favorite lyrics, it’s simply one of many contagious elements of Antipeewee‘s energy.

Speaking of lyrics, this album is rife with social and political commentary. And why not? It’s been a pillar of thrash metal since its inception. Whenever your resident thrash hound isn’t partying his ass off, they’re most likely ranting against the injustices of the world, and Antipeewee are no different. The title track takes a pretty firm stance with its second verse: ‘Fueled by fear from lunatics and neofascist politics/Unreason sets the trend to elect a sexist president/Serve up injustice/In a world full of hatred and grief’. If politics ain’t your thing, you can find solace in the band’s incendiary occult stories of the Lovecraftian variety (“Hideous Fate”, “Dagon”, “Army of Deep Ones”) or an untimely run-in with a woman of dark sorcery (“Dreams in the Witchhouse”).

What we end up with as Infected by Evil finishes is a thrash album worth its salt both on its own and within the greater view of the genre. It’s becoming harder to make truly great, worthy thrash as a lot of it can come off as derivative or, worse yet, an off-brand version of a better act. Antipeewee is not that! They have the chops, the energy, and, most importantly, the writing to drive a wedge between them and much of the rest of the pack. This is one of my favorite metal-ass metal albums of the year so far. Check it out if you have an affinity for blistering guitar work and fun music.