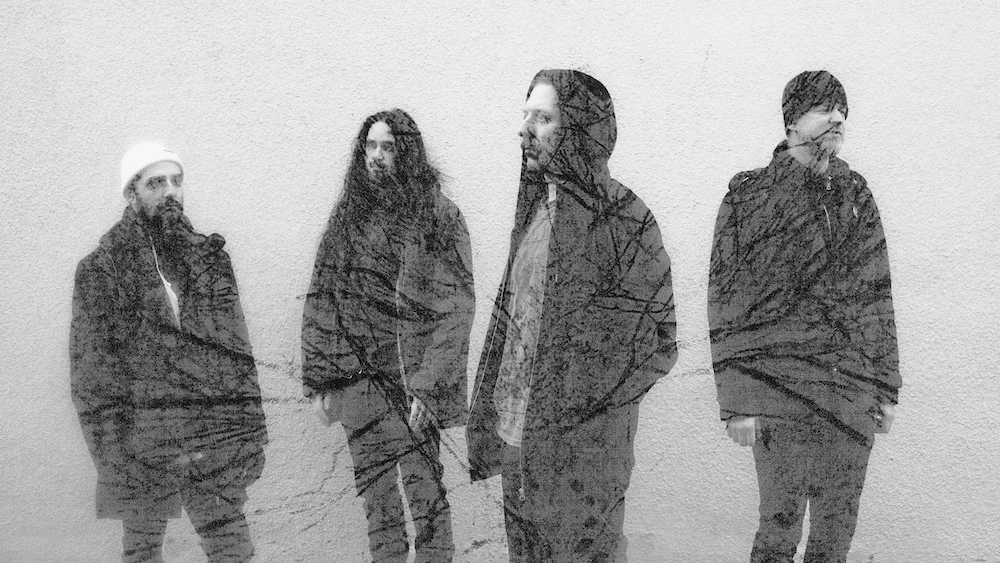 By David RodriguezMarch 3, 2022 No Comments

Abraham hit a little closer to home than you’d think with their exaggerated take on post-apocalypse with a menacing post-metal nightmare in Débris de mondes perdus.

Abraham are a cool band, but their last album was decidedly not for me. As conceptual as it was elephantine, Look, Here Comes the Dark! was a long boy, clocking in at a bit under two hours across 19 tracks, effectively a double, almost triple album’s worth of material. The stuff I heard was good, but not enough to carry me through a feature film’s length – to each their own, and the band still got plenty of praise for their hard work, but I just… couldn’t, at least in one sitting or in any manner that felt wholly satisfying. So when I saw the Swiss metallers were dropping something new, I recoiled in fear. ‘Oh boy, how long now?‘, I asked myself.

Luckily for me, and likely you, Débris de mondes perdus – meaning ‘debris of lost worlds’ – is a much more manageable 45 minutes, eight tracks. It loses none of the atmosphere and power their past work has and even adds some heft, whether that’s by condensing all that weight into a smaller space or because they consciously went heavier with this album is up to some interpretation.

What I feel is objective is the tonal deepening of this new album. Bass sounds heartier, deep moments hit deeper, etc. It feels like there’s a bit more of a dynamic range here, which is nothing but a boon for even the most casual of listener. From the jump, Abraham are a show-don’t-tell band – they’re much more interested in leading you hand-in-hand through their cyclical world of post-hardcore/-metal. Every song is a tour of a land built from scratch only for it to be eroded away from the weather in the instrumentation, dissolving massive sonic installation at the drop of a hat like sugar in water, only to be built up differently in the following song and similarly nuked at the end.

Anything with ‘post-‘ preceding it does seem to often depend on the execution of the crescendo after considerable incline to build tension; it just depends on how you go about it. “Ravenous is the Night” is one of my favorite songs on the album, and it takes this formula seriously, but in a menacingly covert way. While the vocals are yelled with force, spinning a yarn all while the instrumentation mutates and grows underneath it. By the time you realize what’s going on, the track lashes out at you, its sudden end seemingly signifying the end of your own time.

Not all songs play by this rule, though. “Fear Overthrown” is about as fiercely upfront as you could hope with any music with ‘metal’ as a descriptor. An explosive beginning evaporates into a fine mist, which is then tossed about again by demanding drums and caustic guitars, the kind that just feel unsafely rusted and sharp. It’s off-putting in the best way – anxious, but not overly so; dejected, but in a way that allows a healthy purging of emotions. Grief, if you will.

And really, grief seems to be a common sonic theme throughout Débris de mondes perdus. It’s a moody album that seems to swing between bouts of absolute dismay and gloom, and volcanic phases of energy to vent it all. The middle ground between these poles is soaked in about as much tears as it is globules of fire. Abraham never fully commit to either side, though, and I think that’s to the record’s benefit. To go full morose would turn this varied excursion into a doomed affair that it may not be able to crawl out of. Likewise, further sharpening the teeth of its more aggressive side would all but guarantee its more menacing, animalistic side would become untamable and take away from the greater atmosphere. Truly, a balance has been reached with Débris de mondes perdus, and it’s awesome. Look no further than “A Celestial Funeral” or the closer “Black Breath” with frequent collaborator Emilie Zoé to see this in action.

Eastern Europe seems to be on the brink of all-out war right now – there’s already reportedly triple digits’ worth of deaths, and if it escalates and involves more countries and factions, it’ll be the third (being very generous with this number here) major, large-scale conflict during my lifetime, admittedly still a young one. Civilians and other innocents will, and already have, no doubt paid the greatest price for this and all similar conflicts. I can’t help but think about how this type of shit plays into the themes of destruction and survival, a post-war epic meant to churn your insides with the distinct possibility that a large part of the world could be dust in a matter of weeks or months.

It never gets any easier to live with that possibility, and Abraham play off that, though in an obviously fictionalized and safer way. “Maudissements” even manages to sound like the end of the world with its gradual downward slump into a pit of despair. Hell, Débris de mondes perdus as a name seemingly could refer to our current worlds being lost to war, nothing but debris and memories of those left alive remaining. I’d say this album has bad timing, but honestly, it seems as if our world is always one major event away from catastrophe as long as I’ve been alive, and that in and of itself is what makes it depressingly poignant.

Real-world parallels or not, Abraham have again managed to capture a hyper-specific tone with Débris de mondes perdus. It’s violent and raw, a scabbed-over wound that threatens to fissure open at any point and drown any good within its pool of suffocating pus. The end is ugly and unimaginable, but what’s left after it is even worse, and the band’s shift in execution relative to Look, Here Comes the Dark! creates that darkness that shrouds all. As humans, we’re much better at admiring the drama of the end when it’s created in front of Hollywood cameras or printed onto paper and bound into a book than we are actually preventing or avoiding it in our own world – this is how we got 11 seasons of The Walking Dead (how? Why?) and Cormac McCarthy‘s The Road respectively, and this is how we have political conflict, war, climate change, and murderous illnesses in reality. Many heavy bands are apocalyptic in nature at some point, but Abraham could very well be among the best to do it in this realm.