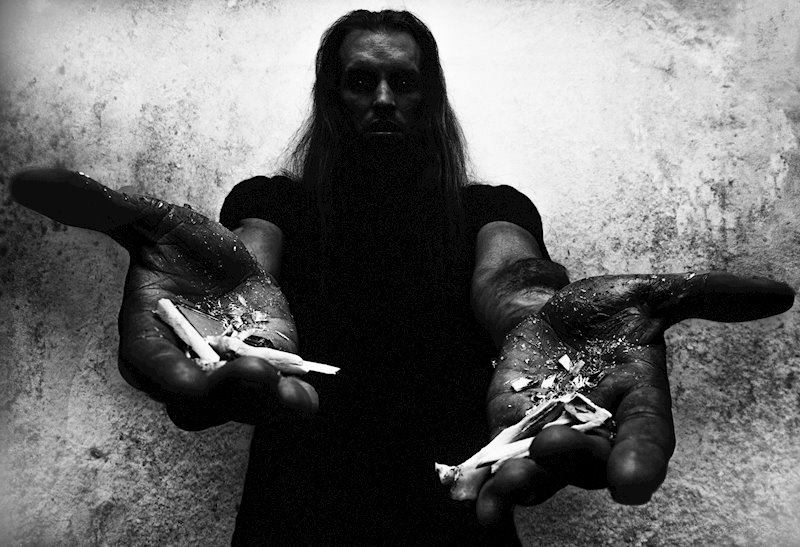 By Dominik BöhmerOctober 5, 2018 No Comments

Brrrr! Say, did it get extremely cold in here all of a sudden, or is that the glacial atmosphere emanating from today’s premiere? The latter, you say? Huh, go figure. Here I was thinking my radiator was playing tricks on me, but it was just German black metal project Infestus‘ grandiose and blistering take on the bitter northern cold set to music that chilled me to the bone. Which is funny, because the title of their new record, Thrypsis, refers to, and I quote, ‘a fracture in which the bone is splintered or crushed‘. The word is borrowed from the Greek language, where it literally means ‘breaking in pieces‘. Fittingly, Infestus‘ music might go a step beyond that by immediately pulverizing your bones with its bleak, harrowing heaviness.

Established in 2003, Infestus is the musical outlet of multi-instrumentalist Andras from Garmisch-Partenkirchen, Bavaria. There were two other members involved at earlier stages of the band’s career (namely vocalist Dagon and guitarist Harbarth), but these days it’s him who does all the heavy lifting by himself, musically speaking of course. Compositions, arrangements, lyrics, and vocals are all done by Andras, in true solo project fashion. Thrypsis, which follows in the wake of 2014’s The Reflecting Void, is no different in that regard; written and recorded between 2014 and 2018, you can hear his sonic fingerprints all over the elaborate soundscapes and brutal riffing.

To give you an idea of what awaits you beyond the play button of the Bandcamp stream you can find embedded a little further down, please allow me to talk about the album’s first single “Thron aus Trümmern” (German for ‘throne of wreckage‘) for a few moments before you can finally have a go at Thrypsis yourselves. At nine minutes in length, it offers a delightful mélange of the tropes you will find on the remaining six tracks by combining slow, atmospheric moments with furious outbursts of angular blackened riffing and harsher death/thrash stylings and Andras’ vocals that constantly adapt to the frequently shifting musical framework.

And with that, we come to the thing you all came here for! You may now go ahead and give Thrypsis a thorough listen for yourselves:

To me, the biggest surprise of Thrypsis lies outside of the actual music itself and in the production, courtesy of (big surprise) Andras himself. Assisted by the mastering done by V. Santura at Woodshed Studio, it strips away the usually inescapable murk and grit from his dark black metal compositions, revealing the bare metallic bones with unforeseen clarity. This lends itself nicely to the lead guitar flourishes, as well as the overall gothic vibe and uncommon musical features of the album, like the touches of piano that pop up here and there. It’s a becoming sonic garb for Thrypsis‘ grand demeanor, and adds to my enjoyment of it immensely.

If what you heard here today was to your liking, why not swing by Infestus‘ Facebook page and drop them a like? Thrypsis is their fifth full-length record, and it’s out now for you to stream (duh) and purchase; you can do so by following this link right here.  While you’re at it, I highly recommend checking out their earlier material as well; it’s definitely worth your while!