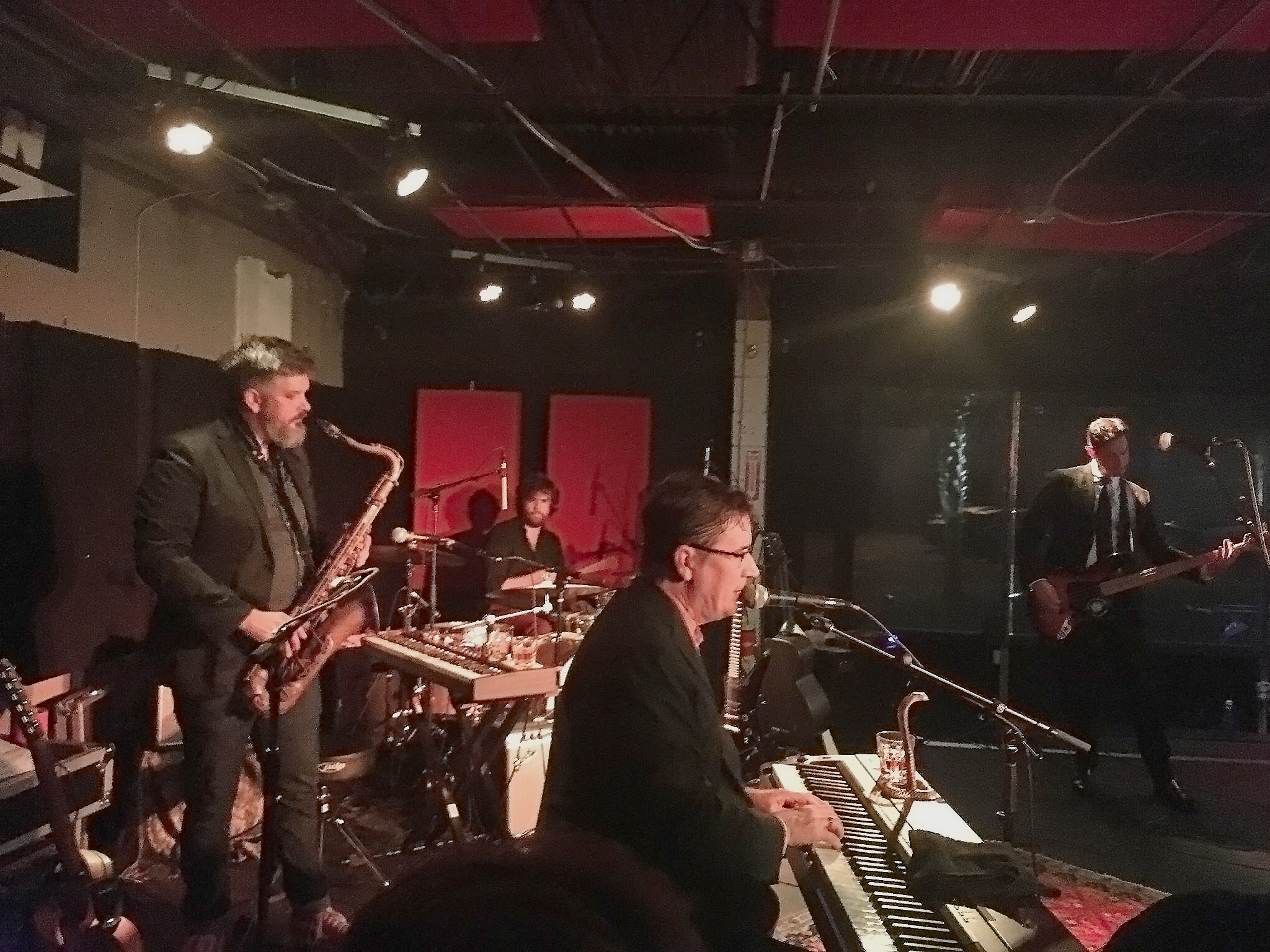 Bandwagons. I’m sure you’re familiar with the concept. While some come from momentary hype, the hype behind The Mountain Goats comes from unique charm a storied discography. I was lucky enough to experience certain moments in that story this past Friday night at the Wilbury in Tallahassee, FL. That night I realized that I tried to hop on this bandwagon way too late in life. Even so, I’m glad I hopped on in the first place.

Along with support from al Riggs, The Moutain Goats performed a sold-out show at the Wilbury to a standing-room crowd made of new and old fans alike. They are currently on their No Shield Except The Skin 2018 Tour which started in Athens, GA the day before.

I’ll be honest, when I saw the description on the event page (listing the artist(s) as ‘ALAN RIGGS’, and therefore making it impossible to find them online at first), I wasn’t particularly excited to see them. Unlike the main act, I didn’t bother to spend any time looking for their music aside from a quick Facebook search.

Those things I just listed? Big mistakes, all of them.

al Riggs started things off with “Young Hegelians”. The band didn’t have any vibraphones or saxophones during their live set, so they made do with guitarist Lauren Petto. Personally, her guitar work was one of my favorite parts of the whole show. Her guitar was particularly important on tracks like “November” where she kept the song grooving forward.

One of my favorite moments of their set was definitely “Hell House”, my favorite song by the band upon sifting through their Bandcamp catalog. It’s probably one of the more well-written songs of their show and has a really subdued tone to it.

The next song “Local Honey” may ring a bell for some hardcore fans of the podcast Welcome To Night Vale, as it was featured as the ‘weather’ on the episode ‘A Story About You (R)’. Up to this point, al‘s vocals weren’t really doing it for me, but I think this became a turning point for them. “Revolutionary Costume” was another favorite of mine and fell towards the end of their set. I caught more lyrics to this one, and I liked the idea of coming to terms with mental health in a new relationship. ‘You can try and change a man/but you can change your brain’.

There were a few technical mishaps from time to time. A loosely secured guitar strap here, a fallen plastic light-up ghost there…y’know, typical concert stuff. Fun, queer indie rock combined with competent song arrangement added up to a delightful show. If The Mountain Goats is coming to your town soon, don’t sit these guys out.

Time for the main event! With a rush of ecstatic screams, The Mountain Goats take the stage and immediately burst into song with “High Hawk Season”. Instead of the vocally dense album version, this rendition feels a tad faster and much louder. These rearrangements would be prevalent throughout the rest of the evening, much to the crowd’s delight. As the band let out the final note of “High Hawk” and John Darnielle let out a quick ‘Hi, we’re The Mountain Goats!’, the crowd erupted into cheers.

It was by this point that the band embarked on a few dirges and quieter songs, and it was quite an odd way to begin a live set. But as I realized, it’s damn near impossible to predict what The Mountain Goats are going to do at any given moment. The songs in question were “Moon Over Goldsboro” and “Shadow Song”. Matt Douglas‘ performance on the keyboard was key to the washy melancholy channeled on “Moon”.

The band quickly picked things up again with a lively performance of “Lovecraft in Brooklyn”. The band was on fire by this point, and it was as if The Mountain Goats has suddenly become the greatest garage punk band of all time. By the time the ‘Woke up afraid of my own shadow’ line came around, the crowd sang so loud they almost drowned out John’s  singing. This carried into a few favorites from Tallahassee (“Southwood Plantation Road” and “Have To Explode”), much to the delight of us locals.

Then the full band left the stage and John Darnielle played a few songs alone. So many songs by The Mountain Goats are just John and a guitar, it would be odd if this didn’t happen at some point. Among the songs performed were “Waco” and “The Plague”, played with as much vigor and crowd participation as ever. However, there was a bit of a hangup during the performance of “Cut Off Their Thumbs”, and someone had to hold up their cell phone so John could sing. I can’t blame the guy; I can’t imagine having to remember 200+ songs over more than 25 years!

So then I suppose what followed was a real testament to the band’s legacy, as I didn’t recognize most of the songs that came next. However, I recall the new single “Song for Sasha Banks”, and I sang along to the steady 4-on-the-floor indie anthem that is “Autoclave”. Ironically, The Mountain Goats refrained from touching any material from their most recent albums Goths and Beat the Champ. But like I said, you never really know what these guys are gonna do next.

After closing with “Hast Thou Considered the Tetrapod”, the band retired, then returned for not one, but two encores including more Tallahassee favorites. “See America Right”, their Sunset Tree hit “This Year”, and the infamous “No Children” rounded out the evening. For over an hour, The Mountain Goats put on a top-notch set that didn’t disappoint in the slightest. And to top it all off, they returned for a second encore of “Up the Wolves”, easily my favorite song from this band.

After it was all over, I was sweaty, exhausted, and glowing. Even though I had only been exposed to both al Riggs and The Mountain Goats recently, I knew I had discovered something special. I think they pair well together, both approaching storytelling as outsiders. And in the case of The Mountain Goats (and hopefully al!), there’s something magical about such a transformation; being on the outside for so long, and then watching the kids you used to be like sing your words back to you.

The No Shield Except The Skin Tour is still ongoing as of this writing. Check out The Mountain Goats Facebook and website for updates, as well as al Rigg‘s Facebook page.