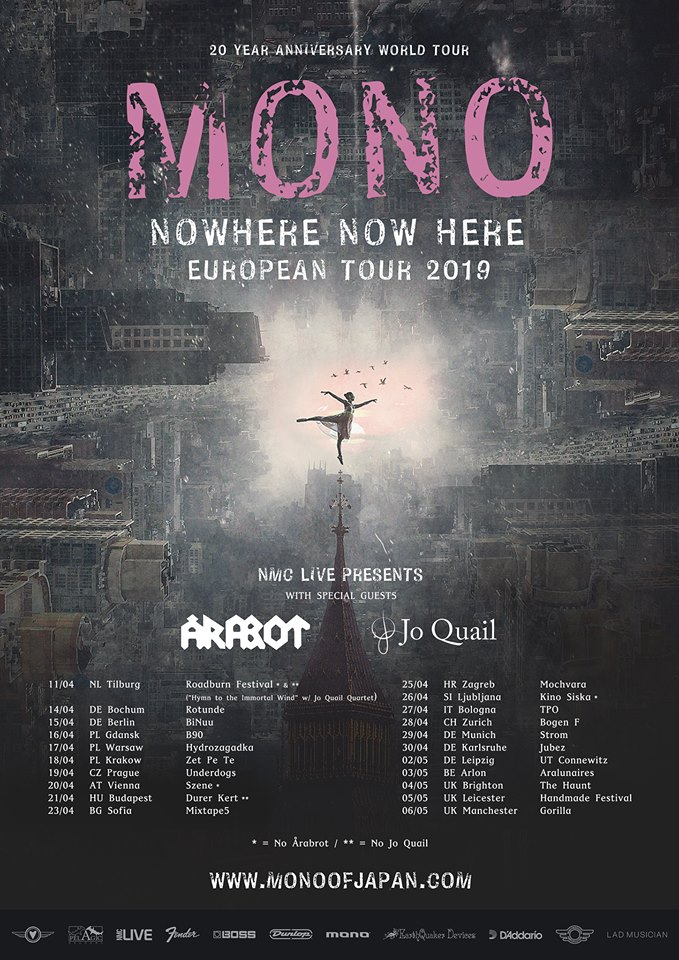 We got a lot of tour announcements within the first days of 2019 already, and they just won’t stop: the Japanese post-rock masters in Mono just announced an upcoming European tour for spring! This run is part of Mono‘s touring cycle in celebration of their 20-year anniversary. The band is also going to release a new record entitled Nowhere Now Here on January 25; it will mark their tenth full-length album in 20 years of active band history.

The tour will start at the Tilburg, Netherlands-based Roadburn Festival on April 11, and mainly covers mainland Europe, as well as three UK dates. Main support comes from Swedish experimental noise rock group Årabrot and Jo Quail. Årabrot just released a new record called Who Do You Love in 2018 and toured with The Ocean and Rosetta in fall; for those who aren’t familiar with Jo Quail, she is a cellist and composer from London, and recently collaborated with musicians from Amenra, Myrkur, and Winterfylleth for the Exsolve record. It was released in November, and presents a very interesting mixture of ambient cello playing and droney post-rock elements.

Since Mono will have their new record out by April, this tour will definitely be full of new material! Their Roadburn show will see them performing Hymn To The Immortal Wind in full, assisted by Jo Quail and her quartet.

Tickets are on sale now on Mono‘s website! Make sure to check out Årabrot and Jo Quail if you haven’t already,and to give a listen to Nowhere Now Here as soon as it drops! Follow the bands’/artists’ Facebook presences to stay up to date (Mono | Årabrot | Jo Quail)!