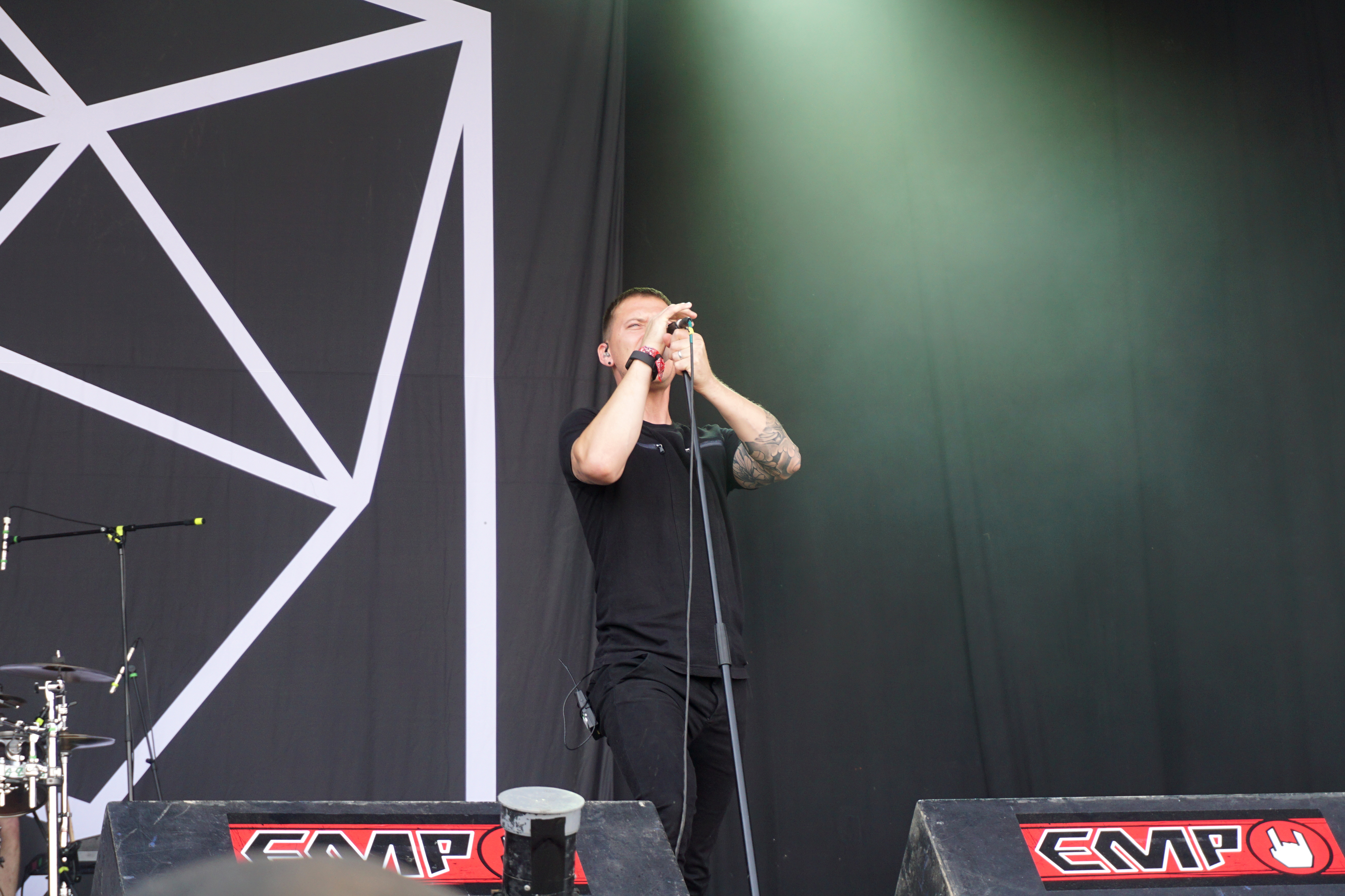 By Rodney FuchsDecember 15, 2018 No Comments

What a horrible way to start a tour: TesseracT missed the very first show of their current European run with Between The Buried And Me and Plini because their van broke down, which in turn left the band stranded in Calais after taking the ferry from Dover. We got to talk with Daniel Tompkins, singer of TesseracT, on their first actual show of the tour in Nijmegen.

Everything Is Noise: Hey Dan, sorry to hear about you guys’s van breakdown. I’m glad you made it to today’s show. I’m excited about the set, and was wondering if there’s a song on your new record that you’re most excited about?

Daniel Tompkins: There is! Personally, I’m very attached to “The Arrow“, the last song off Sonder. It’s only two minutes and we’re not playing it, haha. But I answered your question! We’re playing four songs off the new record on this tour: “Luminary“, “King“, “Smile“, and “Juno“. We just put out a promotional video for it (“Juno“ – author’s note), so it would strange to not play it live, haha.

EIN: Awesome! I consider “Juno“ to be my favorite song off the record.

DT: That was the one song on the album that we left to the very end because nobody liked it. When we were picking a lead single it also was at the very end, because we thought no one would like it that much. We didn’t believe anyone being into the track, but it turned out very popular.

EIN: So you did decide on the promotional video because the fans did liked it that much?

DT: Yeah, we are receptive to our fanbase; we appreciate and want to please people. And with the remaining songs, we thought it was probably the most accessible in terms of promotion.

EIN: I was wondering, isn’t it a hard job to perform directly after a band like BTBAM?

DT: It’s fine, haha. It’s a job at the end of the day. The whole reason is that we’re much bigger in Europe, that’s the black and white. When we’re in America we are the support and we are very versed in headlining and supporting. Our show can mold to any stage at any time of the day. We’re professionals, so it’s no problem.

EIN: I talked to Amos earlier that year, and he told me that TesseracT are like a sponge and assimilate their surroundings, which lead to the shouts in “Smile“ because you’ve been touring with Meshuggah and you felt to make the song a bit heavier. Tell me something about this!

DT: Well, it’s not necessarily that we’re assimilating. I think what Amos wanted to explain is that it isn’t about the music and performance, it’s how bands work behind the scenes in terms of the technicalities, the friendships, and the working relationships. But naturally, if you’re on the road for so long and you observe, you watch and get influenced on a certain level. But we will never let that cloud the creative judgment of the band.

EIN: On Sonder, you incorporated many soundscape elements from your fans. Can you tell me something about the process of choosing them?

DT: That was primarily on our second producer. He’s a composer himself and he came up with the idea, which was a great way to involve the fanbase. He loves sound design, and on the last record and also on Altered State, he actually did a lot of ambient sounds. We’re up for that, we’re up for experimentation, and again, fans loved it. In terms of choosing sounds, that was majorly him. And we didn’t have that many individual sounds that you can identify on the album. He did like four or five groups and created multiple sounds for the atmosphere. I think it did add quite a nice dynamic to the album.

EIN: It reminded me a lot of film scores!

DT: We’re all influenced by film scoring and big sweeping soundscapes. That’s something natural that we lean towards.

EIN: Now that you’re about to promote the new record on tour. Are you already thinking about the next steps?

DT: Yeah, we got albums full of material. We just take it and procrastinate and take time to select the right songs we wanna work on. For the next record, we have such a huge backlog of music. I think we’ve kind of started the process of listening through it and trying to cherrypick ideas that might be good to develop, while we’re not sure with ideas. But I think the next record will happen quite quick!

EIN: How long is this usual process of composing a song? Do you already know which one might get something, or not?

DT: Sometimes we have little seeds of maybe 1-1,5 minutes long, and we just know that there’s a hook and vibe in it that will stay and we will develop into a bigger song. From the very start, there’s sometimes songs that we know ‘Yes this is going to be one’. But half of the time is about making a jigsaw of sound, and we’re piecing together sections until Acle feels happy enough with it, until he feels a competent idea.

Usually, I get the music sent to do my things on it, but we’re completely rehashing this approach; I’m trying to get in there from the very first moment. So, I’ve been through all ideas we have, and I have isolated the ideas I demoed and had given Acle a lot of a cappella ideas to him to write music to, supposed to me writing to his music. That’s got the potential to create a much more cohesive meaning to the music. I feel like, there’s something in this approach that we haven’t explored properly. We are always about trying to mix up the process because when you change the process, you change the output and we are always about change and experimentation.

EIN: So, is there anything you definitely want to try out in future?

DT: There’s so much that I already do. I’m always looking for do different twists in terms from a vocal perspective. I’m trying to experiment more with the aggressive vocals, actually. I’ve spent a long time away from it, but recently did some on “King“ and “Smile“ and was listening back to some of the older demos, which were furiously fast and hard metal song. Ideas from before One, really metal stuff, that’s something to work on. I would like to have some real pacey songs on the next album. I feel like TesseracT have been experimenting a lot, but I feel like there needs to be an injection of energy in the next record.

EIN: That being said, I really think the shouts in “Smile“ were a great idea!

DT: You have to do it in the right places obviously. As a vocal coach, I was about getting in a good condition, so I could get into it again. This came with the whole process because I felt like I did a lot of things wrong with it in the past. But yeah, I don’t believe in overdoing it, it’s the right moments in the music where we need to use them.

EIN: Would you say that TesseracT aim to get heavier again?

DT: Personally, that’s the way I would like it to go. But also you can never tell. You just don’t know where it’s gonna go. But I’ll keep asking for that, haha.

EIN: Have there been any musicians that influenced you in heading into this direction?

DT: Good question. I’m sure you hear this from a lot of different artists, but I don’t really listen to that much metal. Recently I’ve been going back to the Deftones catalog and Tool and all this kinda stuff. Really, that’s just from a selfish perspective. But I feel like we’re getting a little bit older every year. I’ve got kids, and you get to a point where you’re just so tired. I have the feeling that I need a boost of energy and that needs to reflect in the music. I’m feeling like it’s a bit lethargic. Everything I’m producing… I feel like I need to give it some balls, getting back in the zone, rediscover my youth, haha.

EIN: That sounds like you would be afraid to get too old to do it?

DT: Haha, well, I had this conversation the other day at a festival some weeks ago, and Judas Priest headlined. And my word, the guy can sing so incredibly well, and he’s in his late 60s! I’m inspired to be this kind of individual. I always wanted to sing and be creative, so I always said I’ll do it as long until my voice gives up. That’s why I spend a long time getting back on the techniques. I want my voice to be sustainable, I want it for the long-term game. I don’t want to be a singer that burns out before 40 and then is never seen again. We are working hard on this, and all the guys in TesseracT want it to be a long-term thing.

EIN: So we’re going to meet in 20 years at a festival where you are headlining?

DT: Fingers crossed! Who knows. We will have the same conversation and you will say: ‘You did it!‘, haha.

EIN: That’d be cool! Before that, is there anything you would like to communicate to your fans?

DT: As always, I think it’s important to show gratitude. I say it at every show and it might be boring for the fans, but we couldn’t do what we do if it wasn’t for the fanbase. It’s a symbiotic relationship between the listener and the producer. Keep supporting TesseracT and we’ll keep writing music!

Many thanks to Dan for taking the time to answer our questions! If you haven’t already, you should go follow TesseracT on Facebook to stay up-to-date with them.