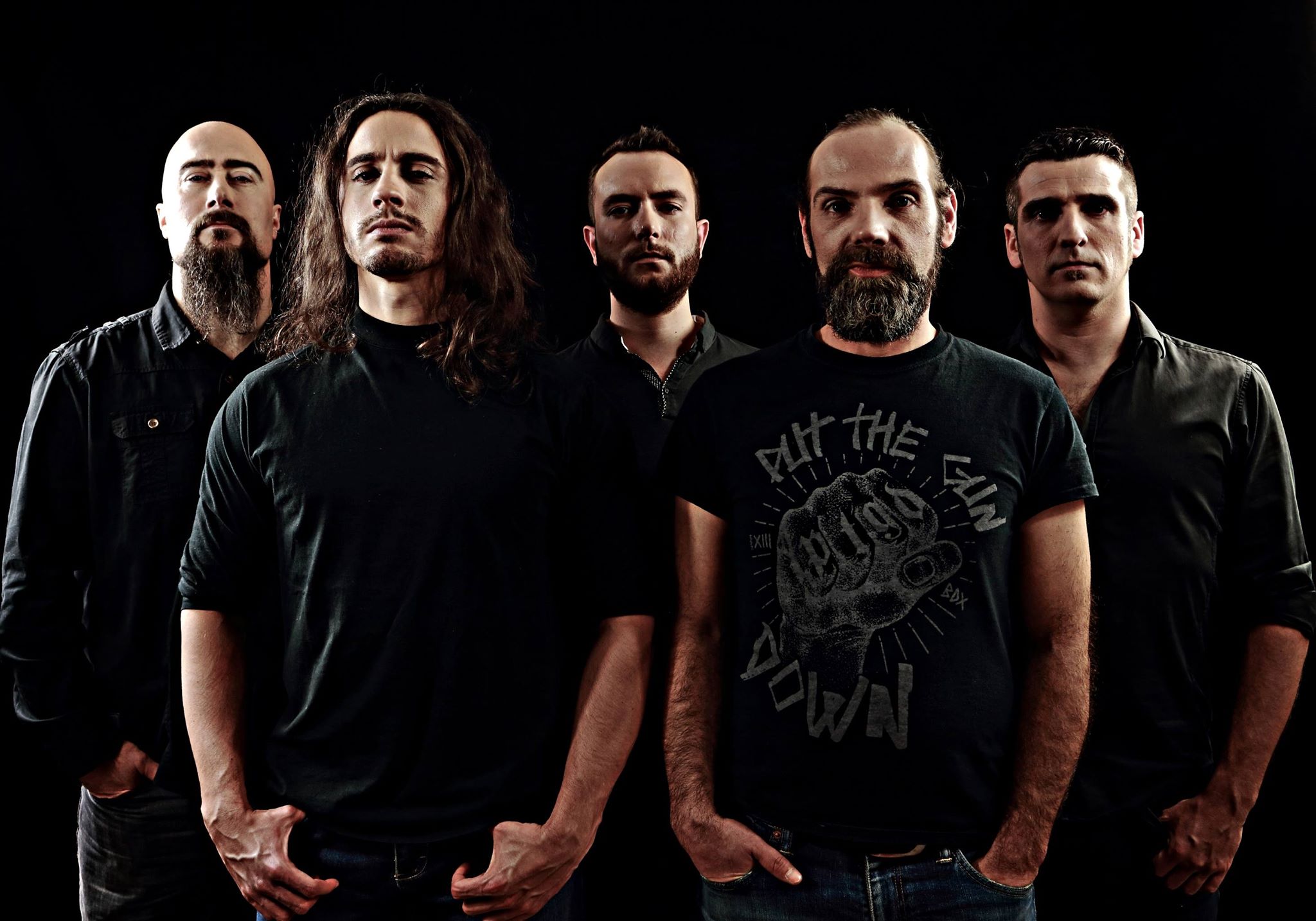 Gorod Talk Past, Present and Everything Else Under the Aethra

By Ashley JacobJanuary 2, 2019 No Comments

Gorod have been consistently ahead of the game since their origins almost two decades ago. They have always operated free of trends and peer pressure, creating the music which has suited them and their fans, whatever the occasion. It’s fair to say that they have been a highly relevant and influential force in modern tech-death metal. Their jazzy and complex, time signatures, bone-crushing riffs and bewildering melodies have drawn in masses of admiration from all parties. And has their momentum wavered in recent years? Hell no!

Vocalist Julien Deyres and founding guitarist Mathieu Pascal were kind enough to talk to Everything Is Noise recently about all things Gorod, including their thunderous latest concept album Aethra. Julien in particular was quick to confirm that Aethra is by no means the first concept album in Gorod‘s archive…

‘Gorod has always proposed concept albums since Leading Visions. This is thus a tradition that has lasted for five albums now. This new album, Aethra, is all about the moon: A star, an allegory, a universal symbol that concerns all peoples and eras. It is divided into ten texts that follow a form of parity in terms of genres: Four titles are devoted to female lunar deities, four to male deities. The remaining two respectively deal with the universal symbolism of the owl and the star itself.

‘The concept is basically a study of different cults associated with the moon through the ages and peoples. Some themes are treated in a purely narrative way, some others in a more philosophical or poetic way, but generally it remains a personal reading of each myth, which aims to awaken critical thought as much as evasion.‘

Aethra also returns to a more ‘classic’ Gorod sound, as the band’s 2017 EP Kiss the Freak experimented with some thrashier conventions of metal. But let’s also be clear that there was never a conscious decision by the band to reassess their artistic direction. As always with Gorod, it simply seemed right at the time.

Julien: ‘We actually never thought about completely changing our music to suddenly become a thrash metal band. We already made a self-released EP in 2011 named Transcendence which includes an acoustic song, one 15-minute experimental prog track, and an instrumental cover of Cynic… but it was never meant that Gorod would turn into an acoustic progressive band or anything else!

‘The EPs that we release ourselves are only experimental material that has to be considered aside from the full-length albums. We made Kiss the Freak because it was a challenge for us to create new material in an extremely short time and experiment with stuff we are not used to playing. This also was a particular context as we just joined a tour with thrash-only metal bands (Havok, Warbringer & Exmortus). So in order to make both a dedication to this style that Mathieu (the main composer) enjoys a lot, and be more coherent with this line-up, we decided to make it for both challenge and fun, and to remind us all that we’re still free to do whatever we want and what we enjoy as musicians.‘

As with all of Gorod’s material, their latest work, Aethra contains some bewildering technical songwriting. From conception to recording, one may wonder how music like this even makes the transition from the realms of the imagination to reality. Mathieu, very patiently, gives us an insight.

‘Usually I set a tempo (always trying to never use the same tempo for two different songs) and just play guitar with drum loops until I find a good idea or riff. When I reach at least 3 or 4 parts, I try to build the song with these ideas, converting those into verses, chorus, bridges etc… For this particular album, I pay attention to not put too many different ideas per song, to keep efficiency and cohesion, and of course to spare time!

‘When the structure of the song works well, I just have to manage transitions, and sometimes I add variations to make the song less boring but still surprising. I send this demo, with the drums and the two main guitars, to the other members for a first approval, and in the same time I write tabs for Nico and Ben. Then Ben adds the bass line, Nico his own leads, while Julien starts working on the lyrics. It’s always during the recording process that we place the vocals, when all the instruments and arrangements are already done, even if Julien has already a good idea of how he would sing.

‘During the recording sessions, Karol improves the drum parts, fills and grooves, and all the little details that only the identity of a real drummer can give. It’s also the moment when I start working on arrangements, samples, intros etc, with everything already in the box. The song is complete only at the end of the recording, actually.‘

But Gorod’s technical flare isn’t just confined to the studio. See these guys live just once, and you’ll understand. Their flawless renditions of their studio records is so fast, slick[,] and explosive that there’s a high chance of you being breathless by the closing song. So how is it achieved: The commitment, the understanding of one another, the… er, practice?

Julien: ‘Gorod is a band that doesn’t really have the time to spend time practicing together. Everyone mostly works on their side but the four musicians try to practice once a week when schedules allow it. Personally, I almost never practice with them (I am the only one who lives in a different area). I only show up directly to the shows. We actually all wish to have time to practice more. But as we all have jobs, it is not easy to gather all of us’.

Mathieu: ‘Yes, drummer- Karol, guitarist- Nico, and I are music teachers so we spend all our time practicing our instruments. So it’s not really a problem not doing so many rehearsals, since everybody has a precise part to play and knows exactly how the song should sound’.

With live performance being an essential tool for drawing in new fans, Gorod have some extensive track-experience on the road. As one can imagine, some crowds are, er, friendlier than others.

Julien: ‘If I’m only allowed to mention one memorable show, I would say our show in Los Angeles at Airliner in 2013. It was happening in East LA which is not the safest area ever, and as Europeans we were kind of scared by the multiple gangs hanging around this area. The club was really creepy: dark, no backstage, only one single lamp for the “light show”, and a ridiculously small mixing board on stage… I remember when I went on stage, all the guys were as tall as me but they were on the ground!

‘A majority of huge dudes showed up, the venue was packed as fuck and the mosh was simply the most violent I’ve ever experienced in my life. After, some huge guy with tattoos on his face and golden teeth came to me and gave such a warm hug. I was so scared first, but this guy was such a nice, smiling dude and he really appreciated the show. The atmosphere was so electric and warm that this show, and that whole day, remains one of my greatest tour experiences ever. Can’t wait to come back to LA, hehe!’

Since the band’s beginning, Gorod has contained a varying committee of talented musicians, with bassist Benoit Claus and Mathieu Pascal as the only two constants. As it turns out, Mathieu is, and always has been, the mastermind composer behind Gorod, as Julien proudly testifies.

‘Mathieu has always created all of the music and I think one can hear it through the whole discography. Even if his purpose is to always make something new and different, I think one can recognize his own touch in every composition. But in the future, some of us will probably add some creative input as we all can play guitar in this band. I am personally a composer in my other bands, but my guitar playing doesn’t fit with Gorod’s music, unfortunately.’

As already mentioned, Gorod has earned a formidable reputation among the metal community, with something close to two decades of experience in the business. And with that also comes some important life-lessons, one of which is the golden rule: Perseverance.

Mathieu: ‘I think the most important thing I learned is that the persons you share the band’s life with, are more important than the music you make. You have to feel good with every band member to progress and have fun. As we don’t earn any money from our music and it’s just for passion, it’s necessary to do it with real friends that have the same goals. The second thing is that you must keep on going even if issues come up. There are bands that become famous from their first release, but they are few. Most of the time it takes years for a band to be recognized.’

And if there is one thing Gorod have been recognized for, it’s their highly unconventional approach to writing metal music. One probably wouldn’t be surprised to learn that ‘metal’ isn’t the only genre which has come into play, though it still plays a heavy part.

Julien: ‘We all listen to a lot of very different music styles and artists in Gorod. Personally, I was influenced by many bands like Cryptopsy, The Dillinger Escape Plan (first releases only), Cephalic Carnage, Abigor, Suffocation, Dissection, Turmoil, Converge… but also a lot of Rock 60’s and 70’s, Hip Hop, Electro, and Soul music… But as a vocalist, my leading influence remains Phil Anselmo.

‘Mathieu is pretty much influenced by guitarists as Marty Friedman, Jason Baker, Al di Meola, but he started to get into metal with bands like Death, Carcass and Coroner who played a major role in his musical orientations.’

And the rest, which (let’s take a leap of faith on this) is presumably also true:

Julien: ‘We all listen to electro music when we party: Synthwave, Minimal, Dub Step, Jungle… only to mention few I would say Carpenter Brut, Gesaffelstein, Joris Delacroix, Justice, Die Antwoord, Leech, Vitalic, N’to, Noisia, Prodigy… many bands like this, hehe’.

What a list. And what a band! But there is one all-important question yet to be answered. What is Gorod?

Julien: ‘Happiness filled with passion and perseverance. We are all extremely invested and passionate guys who are real friends in life and we always give all of what we have. Let’s keep smiling’!

Wise words to be sure. Let’s hope they keep ‘writing’, too! To sample Gorod‘s extensive and awesome back catalog, visit their Spotify page. For all the latest news and tour info, check out their Facebook.