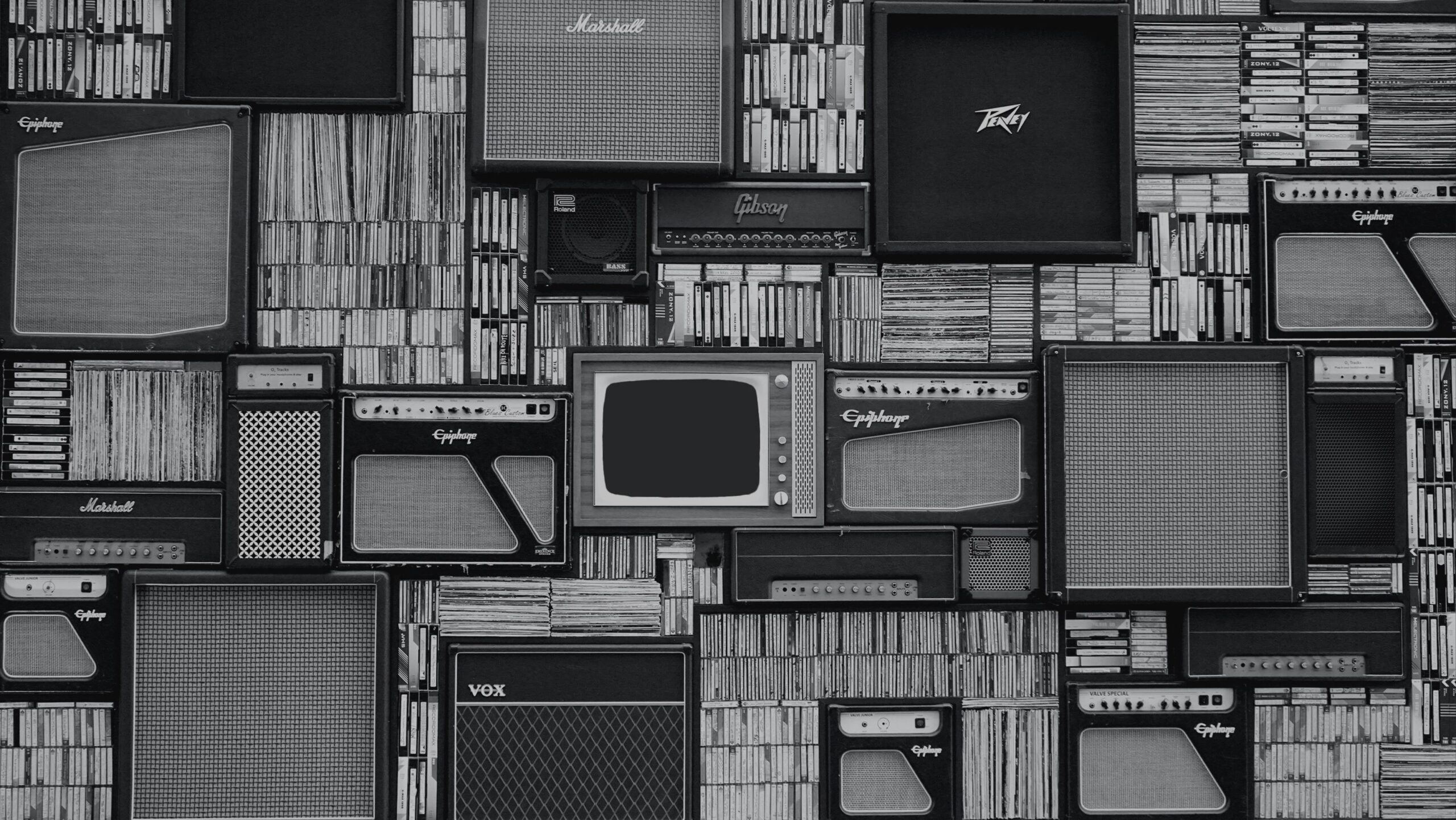 By Toni MeeseNovember 2, 2022 No Comments

Oh 1975. The end of the Vietnam War, the death of Spanish dictator Francisco Franco – it was a turbulent year, to say the least. Musically, Pink Floyd released Wish You Were Here, Queen released A Night At The Opera, Parliament released Mothership Connection, Pattie Smith released Horses, Led Zeppelin released Physical Graffiti – it was a hot year.

Coincidentally, only two people signed up for this episode of NOISE UPON A TIME. And both chose rather obscure records – ambient and jazz in a year with so many important rock albums? Seems like an Everything Is Noise thing to do.

In concept, ambient music has existed for much longer than most people realize. Even Erik Satie’s 1917 concept of furniture music, often cited as the cornerstone for minimal and ambient music, might be reasonably assumed to not be the first time an idea like that has been introduced in the Western art canon – or anywhere, for that matter. We may have simply lost earlier similar propositions to the sands of time, and while that’s a shame from an ethnomusicological/music historical perspective, we still got to a point where there’s a wealth of different takes on and approaches to this beautiful style of music that’s too often maligned as background or (even worse) elevator music.

As an ‘official’ genre (I put that in quotations because genres don’t really exist in any palpable or quantifiable form outside of our brains) though, ambient music got its start in the 1970s. I’m locating its genesis in that time period not to discredit the work of previous artists and composers like the aforementioned Satie, John Cage, or any number of brilliant minds in the fields of musique concrète or electronic music, but simply because it received its name there. Brian Eno’s Ambient 1: Music for Airports, which was released in 1978, was the first album to expressly establish the word ‘ambient’ for a style of music that’s supposed to be ‘as ignorable as it is interesting’ – in the musician’s own words.

While that moment technically signals the birth of ambient music, the idea has been toyed with even earlier by the very person who coined the term in ’78. If you read the title of this article carefully, you might be able to guess what year this happened in. That’s right, 1975. Discreet Music, while still not Eno’s earliest experiment with engaging background music, presents the first full-length album centered around this concept. Especially Side A of this LP must be pointed towards as the first full-fledged recorded instance of the genre Eno codified three years later. A single 30-minute piece built around synthesizers and tape delay treatments, it anticipates later heroics by artists like William Basinski while essentially laying the foundation for them to expand upon.

Side B is more of a conventional piece of minimalist classical music – if one dares calling minimalism conventional in any sense of the word – in that it features a Gavin Bryars-conducted performance of variations on Pachelbel’s “Canon in D Major”. While it’s less important for the purpose of my piece, namely pointing my finger at the exact moment ambient music as a genre sprung into existence, there’s still a lot of beauty to this experimental take on a beloved (if at times overplayed) composition. Its generative and rigorously regulated execution does put it in line with other Eno innovations like the Oblique Strategies project, though, so it’s definitely deserving of its plaudits.

There are so many things left to talk about when it comes to the inception of this style of music I hold in such lofty regards, like anecdotes of Eno’s own eureka moment of epiphany regarding the ambient potential of music or the minutiae of how Discreet Music was conceptualized and recorded, but this isn’t meant to be an exhaustive history. After all, I’m not a historian, and this isn’t Wikipedia. Other people have already done it anyway, and much more thoroughly than I ever could in this limited context. Consider this more of an hors d’œuvre to whet your appetite for ambient music history tidbits. Here’s where it all began, in terms of 20th century art music at least, and I for one can’t thank Brian Eno enough for his pioneering efforts.

I’m going to be honest – without the buzz surrounding the vinyl reissue of this album back in 2018, I probably wouldn’t have been stumbled upon what would become one of my favorite Japanese jazz albums. But let’s get back in time – nearly 50 years back.

A lot of people seem to think that jazz became a thing in Japan when American soldiers brought it over after the country was occupied post WWII – some of the soldiers wanted jazz bars, so it slowly rippled through Japanese society, opposing the common sense of jazz being the music of the American enemy. In fact, jazz arrived way earlier to the land of the rising sun – jazz bands from the US and the Philippines played in Japan in the early 1910s, and Japanese jazz bands emerged here and there shortly after that. Especially in the 1950s and ’60s, jazz really flourished in Japan, reflecting in a mixture of ‘Americanized’ jazz, free jazz, and jazz influenced by Japanese folklore and classical music. Although there are tons of great and interesting releases from that time which set cornerstones for the amazing jazz scene Japan cultivated nowadays, it’s one record from 1975 which has a special place in my heart – Tohru Aizawa Quartet‘s Tachibana Vol.1.

The story behind this record deserves a movie adaptation – which they would probably fuck up. I would go with an anime version, though. Preferably done by Shinichirō Watanabe in the style of Sakamichi no Aporon. The outfit which would later become the Tohru Aizawa Quartet started in the late ’60s by brother duo and then students Kyochiro and Tetsuya Morimura – Tetsuya played drums and was a law student, Kyochiro was a music student who played saxophone. They experienced pianist Tohru Aizawa playing at a music festival which took place at the med school Tohru was studying. The duo approached him after a jaw-dropping performance, and after they recruited Tetsuya’s fellow law school student Konzoh Watanabe on bass, the Tohru Aizawa Quartet was born. After the quartet was formed, they played a couple local gigs and gained the attention of wealthy businessman Ikujiroh Tachibana. Being a jazz fan, Tachibana suggested financing a recording for the quartet. They recorded Tachibana Vol.1, and according to Tohru Aizawa, around 200-300 vinyl were pressed – some of them, weirdly as it sounds, used by Ikujiroh Tachibana as business cards. The nerve of that man.

Back then, nobody really cared about the release – Japan saw probably hundreds of jazz albums every year around that time, so a record by a couple of students without any reputation in jazz would go down mostly unnoticed. The original vinyl had a handwritten note by Aizawa in the liner notes – how charming is that?

‘We just created music we wanted to create. We are aware that music takes a different shape dependent on the ear of the listener. There are people who can appreciate it and others for whom it’s just noise – just a load of notes clumped together. We know it’s not to everyone’s taste but decided to push on and create for it for ourselves.’

Tachibana Vol.1 was the only record by the band – Aizawa became a doctor (he graduated top of his class) and is still working today. The album itself vanished into obscurity for decades – until some jazz nerds dug it up, and the tune “Dead Letter” was featured on UK label BBE‘s compilation J-Jazz: Deep modern jazz from Japan 1969-1984. The obscurity and quality of Tachibana Vol. 1 turned heads in the jazz world, and more and more people caught up. Slowly, the album became THE record to listen to if you were into Japanese jazz – and in 2018, BBE reissued Tachibana Vol. 1 in Europe, while Octave Lab did the same for the Japanese market. That’s when I got into it – and obscure jazz history became an intimate love story.

It’s hard to pinpoint the magic of this album. When I got my ears into it, I wasn’t aware of the wild history of the record – so I only had the music. There isn’t anything particular outstanding going on with Tachibana. Elements from Latin and modal jazz are shaping the musical soul of those five tunes, cascading solos by Kyochiro’s sax and Tohru’s piano seem to jump between life-and-death-duel and love story, bass and drums are pumping the pulse of each song straightforward. There are little to no breaks on Tachibana, it’s a force of nature.

Jazz is and always was known for live recorded albums, but even considering the American classics, I can’t think of any jazz album as vibrant, lively and more in-the-moment than Tachibana. Those four amateur musicians are so locked in, shared so much joy and performed with so much energy that you can feel the sweat and smell the excitement within the little studio in Numata, a small town near Tokyo. With or without the story behind the album – its impalpable magic, moments of transcendental wonder, and the amount of charismatic energy make Tachibana Vol. 1 such an outstanding piece of jazz history, and a timeless classic for every fan of the genre.