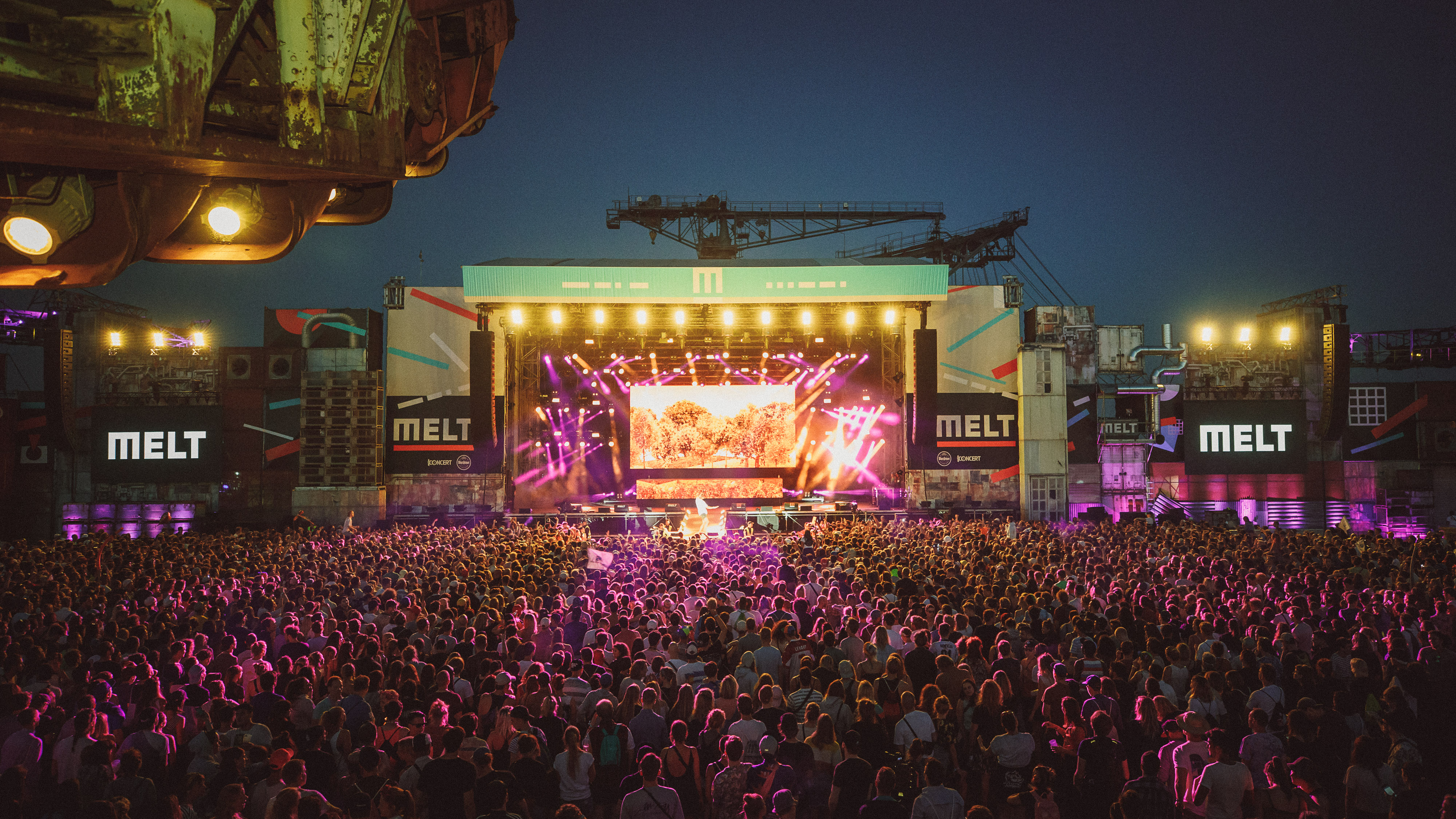 A Snob at Melt or “Why Is Everyone Covered in Glitter?”

My festival experiences mostly focus on smaller metal festivals or even more niche stuff, like festivals which cover prog or stoner/doom. While I also visited a big hip hop festival, as well as electronic music festivals, happenings that target a more mainstream-y audience were always unknown ground for me.

Earlier this year, the idea grew in me to visit Melt Festival, which takes place every year in Ferropolis, Graefenhainichen (Germany). They were some interesting names on the line-up, and I was looking forward to share some musical experiences with my girlfriend, which isn’t normally that easy for us, based on our different tastes. At the end, we settled on Melt, and also decided to be boring adults and not go camping. That meant we had to drive to the festival and back home three days in a row, which sounds a bit annoying for sure, but let me tell you: starting a festival day after you showered in YOUR OWN SHOWER, slept in your own bed, and having had a relaxed breakfast on your balcony is a very good way to enjoy a festival. Maybe you’re missing out on the hot sun which teams up with your loud and smelly neighbours who wanna listen to hard techno 7am in the morning. Maybe we are squares, but damn it felt good!

Melt takes place at Ferropolis, which used to be a surface mining place on a peninsula back in the days, but is now an event location for festivals and other happenings. The venue contains two big stages (Melt Stage and Meltselektor) and many smaller stages, as well as a wide and fairly-priced variety of food booths. Plus, big-ass cranes and bucket wheel excavators line the stages and festival grounds. Also, the second stage is at a beach. How smooth is that?

So you got an awesome beach with a stage (we will come back to that later), a nice little forest with some small stages (which smell of weed, beer, and love in the night) and your typical ‘food court’. The place is very lovely and adventurous, and besides some minor annoyances based on the logistics surrounding the festival, it’s a really awesome place to be.

The overall vibe of the poeple is more like a small Coachella. It’s more about Instagram, glitter, and fashion than about the artists, and we’ve met a lot of people who only attended for the headliner shows. It’s okay, but it weirded me out a bit. Nevertheless, I’ve met a bunch of Scandinavian people who were really awesome and had propeller hats. That was cool, and we had some drinks while Kali Uchis was playing. Speaking of that, let’s talk about the artists. You are here for that, right?

Well, what a start. The crowd was pretty small, but damn, what a smooth show. This group of extremely talented musicians not only played some of their best songs, including some tunes from their new album Hive Mind (check out review for that here), but they also had some awesome renditions of vocalist Syd‘s solo work. The sound wasn’t perfect, but sitting in the sun, surrounded by cranes and listening to The Internet was really amazing.

I only got to see/hear 3-4 songs from her, but they were my first tunes at the amazing Meltselektor stage (which, again, is on a beach), and it was pretty perfect for that. Kali Uchis‘ new album is pretty smooth contemporary r’n’b, so I just had a drink, enjoyed the sand under my feet, and relaxed to those songs.

I really, really love Superorganism‘s music, but the overly-nervous-but-trying-to-be-a-casual-super-hipster-millenial persona of vocalist Oroho Noguchi was a bit annoying. Oh, and they had major tech problems at the beginning. Still. Great songs.

George van den Broek was probably too stoned to tune his guitar, so his bass player had to fix that. After that, the band surrounding the 19-year-old prodigy unleashed something which became one of the most beautiful musical experiences in my life. Incredibly smooth, intimate, and ultimately fitting to move around in the sand like thick fume. I loved every second of it.

At a festival where most of the people expect dancy electronic music or electro pop, this sedating act didn’t match well with the crowd. Only my deep admiration for the band made this a great gig for me. I saw a lot of bored faces in the very small crowd, and I understood that. Overall, there wasn’t a real connection, sadly.

Florence and The Machine (Melt Stage)

I really was about to get home, but my s/o was really eager to see them. My back hurt because I was carrying two bottles of water in my bag, so I sat down at the terrace stairs which environ the stage area and enjoyed the show. As someone who was never a big fan of the band, I was blown away by their show. Energetic, on point and really engaging. A surprise hit.

Yeah, Saturday was the weakest day for us, but on the plus side, Moses Sumney was a life-altering experience. Easily amongst the best shows I’ve ever seen. This man and his oustanding band delivered a performance of rich artistery, depth, casuality, and energy. His debut album Aromanticism was praised by critics, and if the power of his live shows keeps the level I felt, this guy has to take at least the world of modern music nerds and enthusiasts by storm. Every single person was moved. I was in tears, facing the sheer beauty of his art.

Next to Moses Sumney and Yellow Days, this was the best show at the festival, and the much-needed jazz infusion my snob soul asked for. Their performance was fun, powerful, and incredibly inspiring to watch, but sadly frustratingly short. Like, next time I wanna see a five hours of awesome and entertaining jazz by this extraordinary quartet of young, ultra-talented people. I was a big fan of this band before, but this gig ejected them to completely new heights.

A very interesting concert, which was the epitome of an unpleasant phenomenon I’ve experienced on a lot of shows during this festival. So often, the performances are so deluged in light shows, pyros, and flashes of lasers that it really distracts from the actual music. So often, the performances are style over substance. The XX are a big-ass band, but they were not really tight on stage, with little to no chemistry. Their show on the other hand was astonishing. I’ve enjoyed it, but I left this show and the whole festival with a grain of bitterness.

Melt was a nice experience, but I felt like I was not really their target audience. Many artists I’ve seen and many DJ’s I’ve heard were boring and repetitive. To be fair, I’m not the dancy guy; I wanna experience good music at a festival. Thankfully, the great locations and the fantastic artists I’ve mentioned in this article made up for every second of doubt and alienation. I’m eager to visit the festival again for the handful of oustanding performances they allowed me to experience.