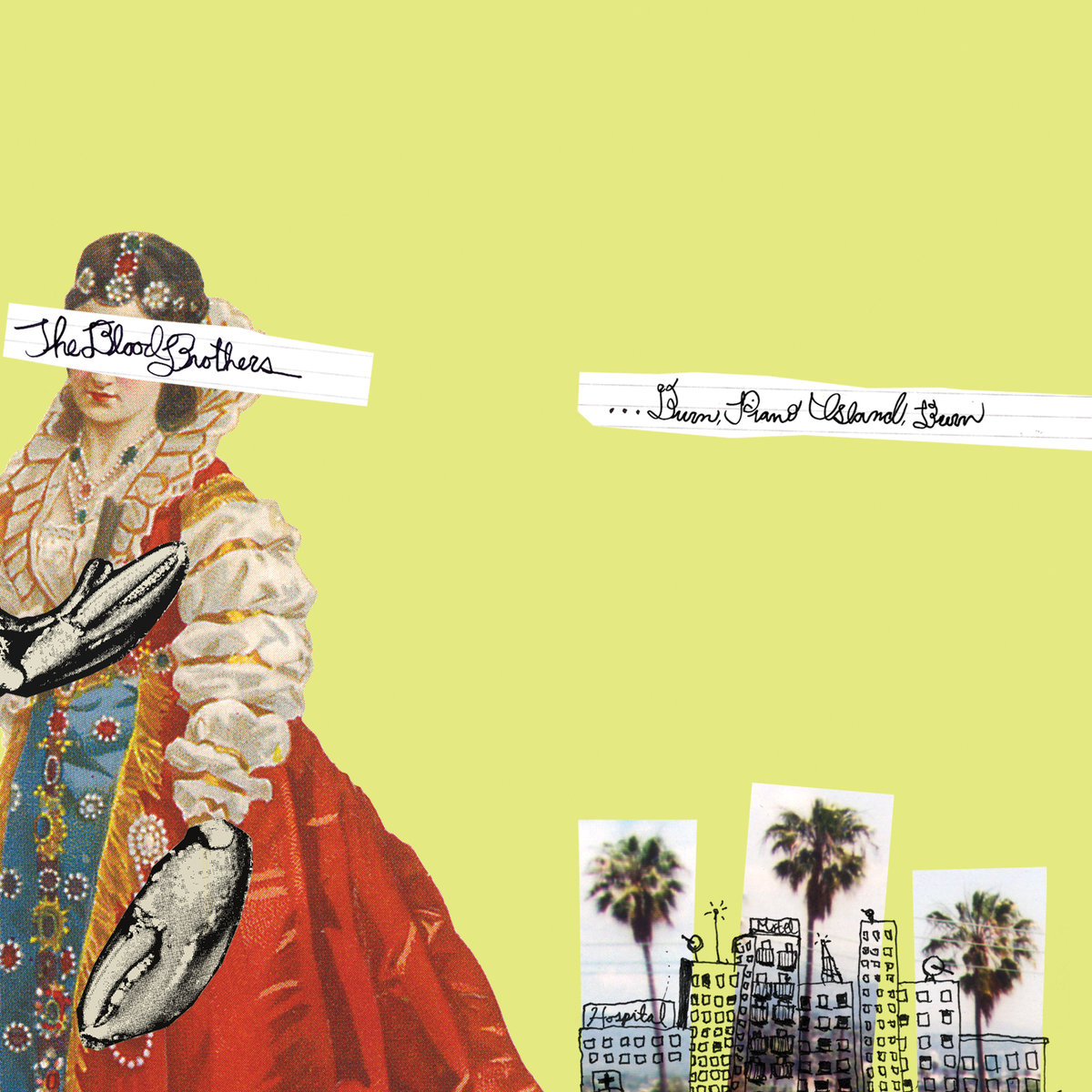 Modern society has become acutely aware of and susceptible to the unavoidable chaos and entropy of all systems natural and artificial. It’s only logical, then, that at least some of the music created in such an environment reflects this truth in a creative, artistically challenging way. Enter The Blood Brothers: over their initial run between 1997 and 2007, the Redmond, Washington quintet blazed more than one trail, pumping out five albums’ worth of corrosive, unflinchingly experimental, and highly energetic post-hardcore/screamo/art punk/whatever you want to call it. The impact and influence of their output can’t be overstated.

In this episode of A Scene In Retrospect, we will be focussing on their third full-length release, …Burn, Piano Island, Burn. For this purpose, the duo of EIN PR/social media manager Inter and editor David are going to share their personal takes on this record over the following ~800 words. Please enjoy!

The Blood Brothers dealt in post-hardcore with an unreal absurdism – like a screaming Salad Fingers cartoon that trades the olive drab mood for colorful, feral bombast. What they really were, though, were the voice of my rebel-without-a-cause teens. The Seattle quintet was born from – and for – the Hot Topic generation that binged Jhonen Vasquez works and spent too much time on MySpace and Newgrounds.

That’s a very important factor to keep in mind, because while I don’t think The Blood Brothers only work in that timeframe, it shows not only the circumstances in which they thrived as artists, but also why they resonate so strongly with me. The hormonal cyclone of the teenage human body is not unlike the derailed train car that their music resembles, or the entropic presentation of their live shows.

Jordan Blilie was the (relatively) straight man to Johnny Whitney’s often shrill and slurred wild card, sharing vocal duties like two technicolor wolves rabidly feeding from a single carcass. At first glance, the lyrics seem to be constructed of sentences that began earnestly written, then finished off with several strikes of your phone’s autocorrect creating deranged poetry. This makes for off-kilter tales brimming with sterile violence, body horror, and vivid abstraction. The title track is a surrealist apocalyptic rendition of Gilligan’s Island (‘Bulimic rainbows vomit, what?/Coconut pupils never shut/The sea shells scream out celestial code/Melting on the shore inside a flame snow globe’).

“Ambulance vs. Ambulance” is a frenzied math problem written by Happy Tree Friends, and it’s all fervorously delivered:

‘Ambulance Y imprisons a sigh
Of recent amputee and dumps her in the xylophone trees
Ambulance X scours the tanning complex
For Rapunzels rotting in their skin cooking coffins
Ambulance Y drops the body off at door step!’

The dynamic between all members is unhinged – a chemistry of the most literal, reactive, and explosive sense. The guitars seemingly play a fatal game of chicken with the vocals, both bursting at the seams with pent-up energy, daring each other to break formation first and erupt. Pianos drop runny dollops of pastel color into songs, or dips them in thick synths like in the intro of “Cecilia and the Silhouette Saloon”. Drums metamorph into any tempo needed, but handles fast, punky fury the best. Every lick of instrumentation is chaotic; even the disarming calm of “The Salesman, Denver Max” doesn’t last long before some discord oozes from the pores of the track. If The Blood Brothers have the temperament of a grenade, surely …Burn, Piano Island, Burn is that grenade’s safety pin stuck in your teeth.

The fires that scorched Piano Island would last a few more years, carrying over into albums like Young Machetes (my favorite) and Crimes. They were one of few bands I would call indispensable at that point in life. The Blood Brothers’ flash-in-the-pan brilliance can’t be replicated, nor should any attempt be made to. Their legacy should remain untouched, sealed away like a kemetic god. What a band – what a time.

Damn, I was waiting for this. The Blood Brothers ring a bell for many, but they are still very overlooked. To talk about …Burn, Piano Island, Burn is something that makes me very happy, so let’s dig in!

So, who are The Blood Brothers? Primarily, a post-hardcore band founded in Redmond, near Seattle. And who are The Blood Brothers really? An ultra-expressive powerhouse, which combined post-hardcore, screamo, noise rock, grind, prog, and a good chunk of The Mars Volta-extravaganza. Intrigued? You definitely should be! Disbanded in 2007, the band released five studio albums over the span of ten years, of which their third, 2003’s …Burn, Piano Island, Burn, is probably the most critically acclaimed one. The album saw their most apollonian combination of influence, while still being charmingly all over the place as well as powerfully flamboyant. Produced by legendary engineer wizard Ross Robinson, the band crystallized an impressive balance out of juvenile compulsion and restlessness on this album, without missing out on mature, progressive ideas and elegance.

…Burn, Piano Island, Burn shines through its tasteful pacing of calmer songs and bursting chaos, having more subtle (but still partially disturbing) tunes like “‘Every Breath Is A Bomb” be followed by “Ambulance vs. Ambulance”. This is a trend which flows throughout the whole album, banning every sense of boredom, and making it consistently exiting and fascinating.

Even with me trying it with this piece, it’s really hard to describe the fascination behind this record. It’s so much more than the sum of its parts, although those parts should be enough of a selling point. There is so much to discover, so much to feel and think while listening to it. While it’s definitely not for everyone, The Blood Brothers created an essential record for every music enthusiast. If you haven’t given them a spin, take your chance and go for a ride.

And that marks the end of another episode of A Scene In Retrospect! I would say that this was a very special one, but in all honesty, they are all special to us for various reasons, and I hope you feel the same way. Nostalgia is an emotion best indulged in together with some nice company, after all! At least that’s the way I see it. Anyhow, what are your thoughts on this band/album? Do you have any suggestions on who else we should be giving a retrospective review? Leave it all in the comments!

Hopefully I’ll see y’all back here in fourteen days for another musical stroll down memory lane! Until then, stay safe, and as always…