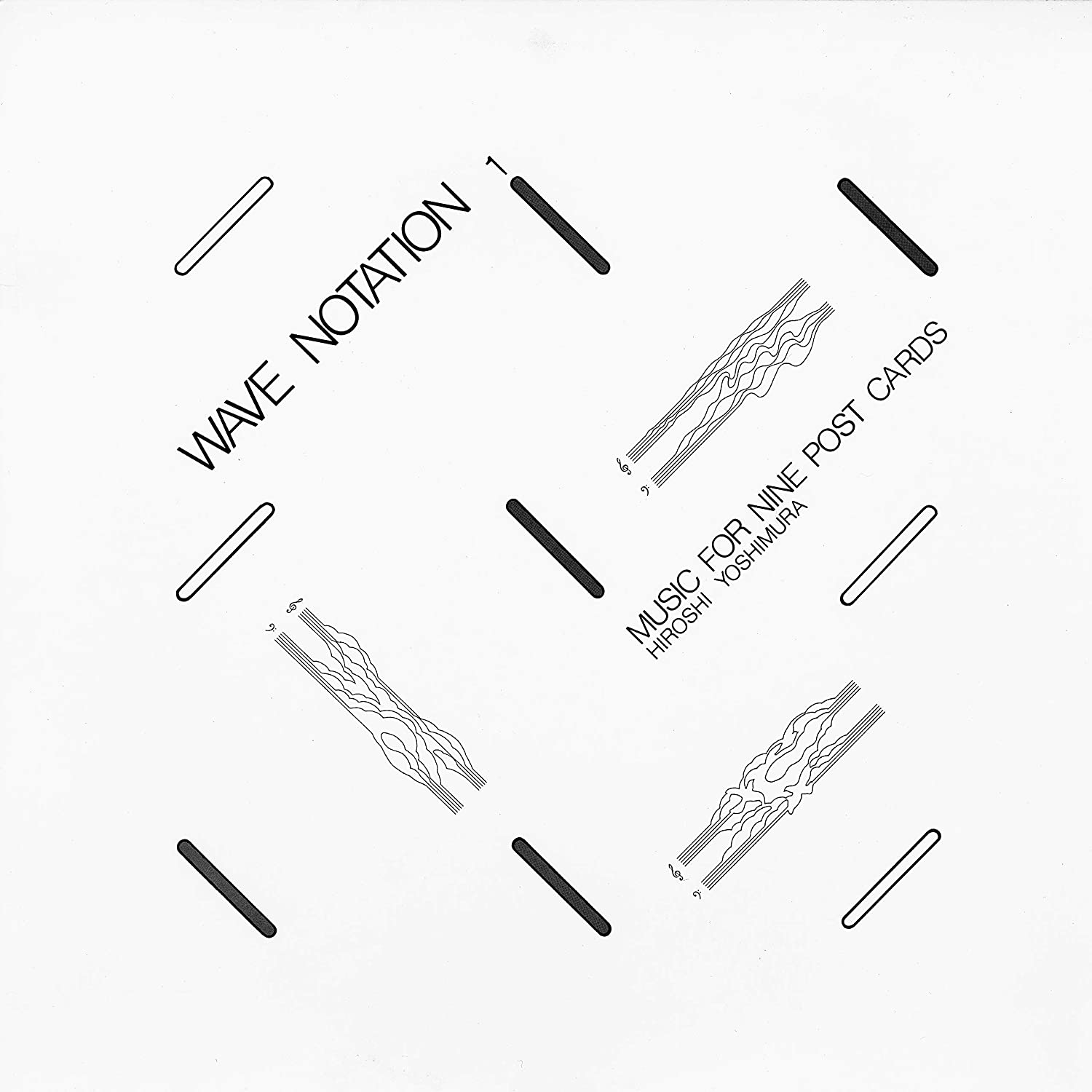 A SCENE IN RETROSPECT: Hiroshi Yoshimura – “Music for Nine Postcards”

By Dominik BöhmerDecember 31, 2022 No Comments

It might be argued that a year’s send-off needs to mirror its course to really make sense; I say to hell with that – music that’s turbulent and confusing enough to sum up 2022 isn’t something I particularly want in my ears. And so, we’re ringing out this (continued) clusterfuck of a year in the quietest, most wholesome way imaginable: by discussing Hiroshi Yoshimura‘s Music for Nine Postcards, one of the crown jewels of (Japanese) ambient music.

The omnipresent effervescence of our everyday lives drown out any real sense of peace and quiet we might be able to gather from various sources here and there. Everything’s too loud, too bright, too readily available, and it’s all in your face 24/7; no wonder anxiety and depression are running rampant throughout our society these days, where being visible and ‘productive’ (whatever that even means) are valued above genuine self-expression and peace of mind. Feeding yourself through this meat grinder of a rat race, voluntarily or not, will invariably leave its mark on your body and soul, so the need for respite will never diminish.

Luckily for us, music such as Yoshimura’s exists to take us by the hand and lead us outside of our mundane experience from time to time, gently reassuring us that there’s more to life than the numbers we’re crunching. Inspired by ‘the movements of clouds, the shade of a tree in summertime, the sound of rain, the snow in a town‘, Yoshimura imbued his work with a real sense of place and purpose, offering the listener solace and togetherness through his minimalistic, warmly enveloping sounds. Recorded at his home with only a keyboard and a Fender Rhodes, Music for Nine Postcards has come to embody both his own work and the wider spirit of the Japanese ambient scene at that time, which encompassed an honestly astonishing depth of talent.

Singling out one track from this collection would already be too sharp of an incision; a full, uninterrupted listen is by far the preferable option, facilitated by its concise runtime of 45 minutes. Calm, wistful, yet never devoid of purpose, Music for Nine Postcards is a holy grail for many an ambient head such as myself. Tuning into this record never fails to give me that coveted ‘heavy-floating’ feeling (it’s hard to explain), and it’s become a cornerstone of my personal collection. It tells me that it’s okay to take my time, to prioritize my own well-being over arbitrary thoughts of ‘success’. Whenever the world becomes a little bit too much to handle, this is where I come to unwind: a generous space of music that gives far more than it takes.

The word ambient is a rather spacious and ample term to describe a wide range of music that encapsulates the tranquil and transcendent textures of sound arranged in such a way that puts more emphasis on music’s naturist and journey-like qualities. You can get a feel for the environmental nature of ambient sounds just by listening to notable artists within this aspect of music, such as Brian Eno or Erik Satie. Yet, whilst we can commend many of these early proponents of ambient music for their innovative approach to sound through minimalistic and relaxing means, ambient music composers outside of Western spheres could be recognised more for their environmental approach to sound, perceiving such as harmonious to a landscape painting or simply to looking out of a window.

Hiroshi Yoshimura was certainly a pioneering figure in the emergence of Japanese ambient and minimalism, architecting layers of sound that urges the listener to become more aware of their surroundings and the tranquil beauty that often goes unnoticed. Music for Nine Postcards is something that I think fits this description perfectly – although intended as a backdrop for visitors of the Hara Museum of Contemporary Art, the effectives of Yoshimura’s composition has elevated such an album into the minds and hearts of many all across the world.

Each of these tracks are dexterous in their ability to sonically characterise their intended environment with an element of elegance and unaffected beauty. Opening with “Water Copy”, for instance, Yoshimura projects this sense of comfort that allows you to take a moment to breathe and contemplate the simplistic wonders of our unprocessed world. Certainly, I have found a similar sense of comfort when listening to a many of these pieces, from the minimalistic melody lines in tracks like “Blink” and “Dream” that linger with anticipation only to be greeted with warming and colourful textures on the other side, to the airy soundscapes that underlie within the transparent recital of Yoshimura’s soft piano and wind pieces in, say, “View From My Window”.

The otherworldliness of these pieces is another thing that grasped my attention on this record, but for very different reasons than what I have often been used to. Instead of pulling you into some interdimensional or outer psychedelic landscape, you instead become immersed in the sonically environmental and rural atmospheres. These tracks are capable of carrying you away from the hectic, frantic, and industrious conditions that our world can sometimes be perpetuating and instead lay you at the centre of an unaffected landscape where one can feel the moving of clouds and blowing of calm winds onto tree branches.

Whilst Eno might have created ambient music to decorate the backdrop of an environment, and Aphex Twin to add colour to other electronic musical sections, Yoshimura utilised ambient music by means of defining a physical space and putting it at the centre of the music. This is what makes Music for Nine Postcards so enchanting – simply by listening and closing your eyes, you are able to get a sense of the natural and authenticated environment that the artist was confronting. A simplistic and mediative state of tonal beauty comes over you, and you begin to replace your surroundings to a point where you’re deeply entrenched in a spacious, serene landscape.

It was planned out so well. An upcoming A Scene In Retrospect, Christmas, some time on my hands to write – perfectly balanced, like all things should be. The flu disagreed with that plan, and on December 24, I was in bad shape, basically dying. Not really, but you get it. Luckily, the record in question is Hiroshi Yoshimura‘s Music for Nine Post Cards, commonly known as one of the most beautiful albums in existence.

In ‘preparation’ for this piece, I listened to the record again and again while having fever dreams. Not ideal, but it definitely unlocked something new, a new element. Or maybe it just intensified what was already built. Music for Nine Post Cards is one of the pinnacles of Japanese ambient, a field of music so packed with awesomeness that I can’t even begin to explain exactly HOW awesome it is. Still, even among masterpieces by Yasuaki Shimizu, Midori Takada, Haruomi Hosono, or Takashi Kokubo (just to name a few – the world of Japanese ambient is UNREAL). Hiroshi Yoshimura‘s arguably best (some would argue that Green is equally as good) album shines as something special. Released in 1982 when Yoshimura was already 42 years old, it served as his debut solo record, followed by a an impressive discography. Sadly, Yoshimura passed away in 2003 after he lost his fight against cancer. His music, though, lives on. Hopefully forever.

So, what makes this album so special? It talks. It tells. It paints. It cries, it laughs, it dreams. It swims through an aural ocean. Every note is a touch of a friendly hand on your back, a warm smile, a tear rolling down your face. A warm drone, gentle piano – Music for Nine Post Cards is warm and inviting for the most part, but some unnerving, little moments, some tense harmonies here and there, which resemble recently passed maestro Angelo Badalamenti‘s work on Twin Peaks. On the other hand, you will probably never feel more wholesome, more secure than when you listening to the phenomenal “Blink”. Ambient might be a tough genre to get into, labelled as mere background music by many – which is true for the most part, to be honest, since it’s oversaturated with mindless and generic stuff – but thanks to a lot of outstanding stuff, first and foremost the very record we are celebrating today, it’s definitely worth delving into.

My eyes sparkle, my heart swells, my voice trembles – I love this record, and I can’t praise it enough for how moving and beautiful it is. I hope you love it as much as I do. If not, give it a first, or another spin, because this should be part of every music lover’s life.