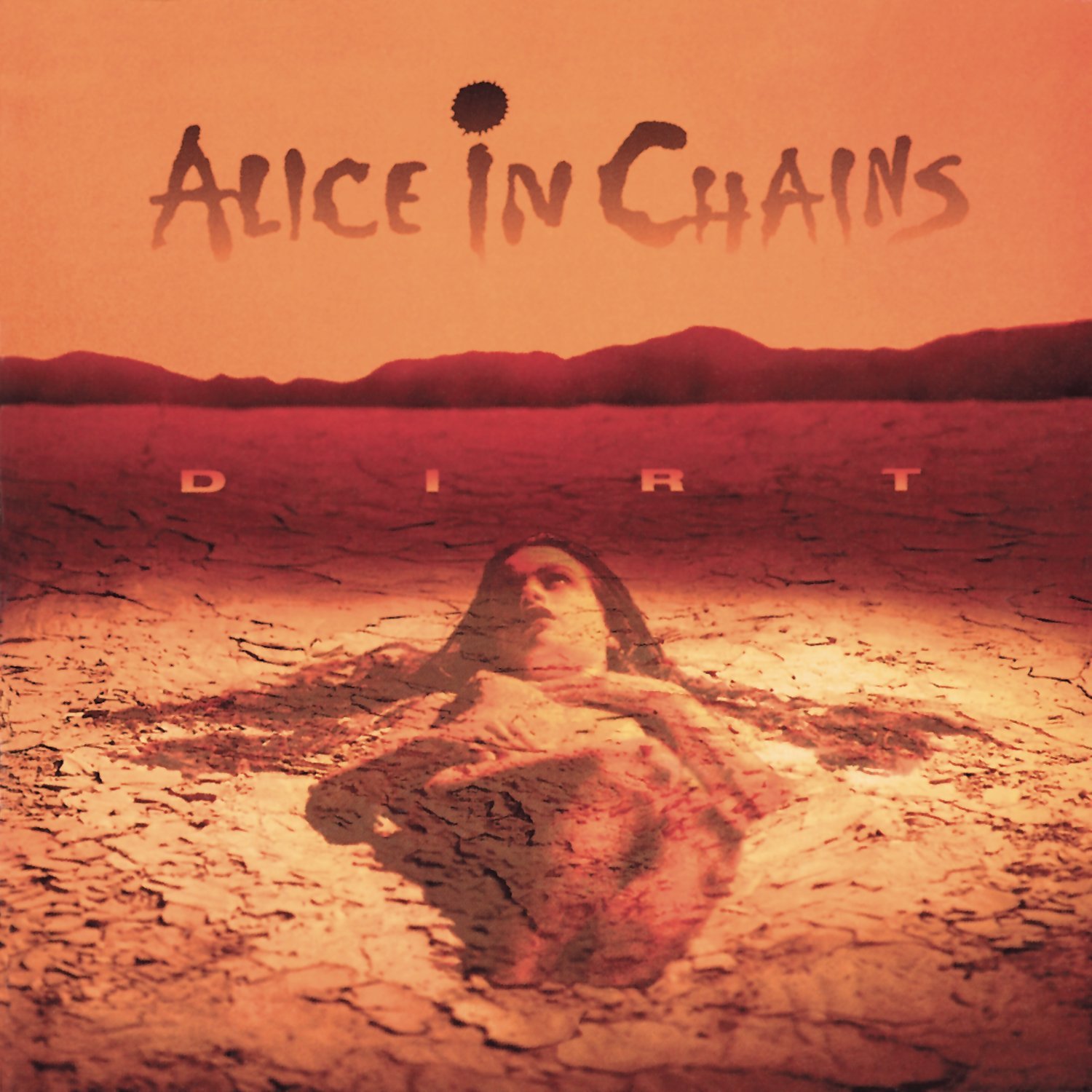 A SCENE IN RETROSPECT: Alice In Chains – “Dirt”

By Dominik BöhmerSeptember 1, 2018 No Comments

Why hello there! It’s a beautiful day for a stroll down memory lane, isn’t it? Good thing that’s exactly what we’re here for! In this episode of A Scene In Retrospect, Everything Is Noise members Inter, David, Vigz, Ashley, and John will be talking about one of the weightiest milestones of the nineties: Dirt by Alice In Chains. Funnily enough, this comes not long after the release of the Seattle mainstay’s most recent album, Rainier Fog. So please, enjoy the ensuing ramblings!

What goes around, comes around. 25 years on and we’re not only still talking about Alice In Chains’ Dirt, but we’re still listening to it. From the ‘smack-between-the-eyes’ opener ‘Them Bones’, it takes us on a hard rock journey that, in my mind, perfectly bridges the gap between late 80’s metal at its best and what we came to call ‘grunge’.

The one big difference to the 80’s rock era was lyrically, and AIC took the lead. Instead of drinking, partying and womanising, grunge was the outlet for every teen’s angst. In the case of AIC, however, the lyrics to Dirt were a lot darker than anything else around, especially in retrospect after Staley’s death.

Tracks like ‘Junkhead’ and ‘Godsmack’ take the sinister atmosphere of bands like Sabbath, but add the personal, heroin-influenced touch. This combination, plus the dual-tracked vocal style, creates an unnerving experience that few other bands elicit. Who could ever forget the lyrics to ‘Down in a Hole’; ‘…feeling so small…losing control…’

Sonically, it still stands up today. It cements some of the key elements that made Alice In Chains what they were: downtuned riffing, dual lead guitars and of course, that double-tracked vocal style of Staley and Cantrell that is just so distinctive, nothing like what came before or after.

I must admit, putting Dirt on the turntable for this review was the first time I have listened to it intently for a number of years. That perspective made the lyrical content even more potent. Listening to it today, it’s still as powerful and ‘grungy’ as ever. At 13 songs long, there are some fillers but, like the time machine that records are, it takes me right back to the grunge scene of my youth, check-shirt, Doc Martens and all.

The absolute pinnacle of not just Alice In Chains’ own catalog, but also mainstream 90s music was 1992’s Dirt. It also happens to be one of the most important albums of my life.

Although I wouldn’t discover them until years later, they couldn’t have entered my life at a better time. When I was nine, my parents divorced, my dad electing to move back to his home state and me staying with my mom in Colorado to continue school. In retrospect, they should have divorced a lot sooner because of ongoing abuse, but as a kid, it’s…not a fun thing to deal with. Dirt helped me deal with this and more.

I wasn’t privvy to the themes of drug abuse then, but it still proved a cathartic listen when I purchased the album (one of the first I ever bought to my memory) with allowance after hearing singles on the radio. From the opening shout on “Them Bones” to the final, fierce notes of “Would?”, I would submerge myself in the double vocal croon of Layne Staley (RIP) and Jerry Cantrell in times of hardships and beyond.

The defiant nature of “Rooster” contrasts with the more despondent tone of other songs like “Sickman” or “Down in a Hole”. Every song is colossally hard-hitting with an unmatched moody, concussive force to it. Such poetic lyrics delivered by pained voices, all but succumbed to the darkness of humanity. Heavy, melodic guitars complement themes of anger, addiction, and loss. It’s not a ‘fun’ album by any stretch, but life isn’t always fun, and there was a supreme comfort in that for me.

Although the members of AIC have found themselves in much deeper and more dire holes than I likely ever will, their music has still helped me dig my way out of my own holes. For that, Dirt is irreplaceable as a touchstone of rock music, the magnum opus of AIC (or at least Staley; the band continues to make incredible music), and one of the most important albums of my life.

From 1992 to present day, the sheer quantity of bands who have tried to make an album like Dirt and unfortunately missed the mark is uncountable. That combo of emotional downbeat choruses and heavy rock interludes are a signature sound that warrants a groan among the nichier metal communities. But NOBODY executed it with the same heart and integrity as Alice in Chains.

From a technical aspect, most of Jerry Cantrell’s guitar work on Dirt was fairly straightforward, from the riffs to the acoustic chords, the groovy powerstrums to those filthy-ass harmonics. They were so simple, in fact, that peers at the time may have ruffled their hair in frustration wondering why they didn’t think of it first. Whether it was the heartfelt ballads of “Rooster” and “Would?”, or the low-end hellraisers “Damn that River” and “God Smack”, Alice in Chains’ songwriting ingeniously touched on the best nuances of heavy music and reproduced them with a clarity all of their own.

But the tragic hero of Dirt is Layne Staley, who took almost the entirety of album space to articulate his perpetual self-destruction at the hands of drug addiction. This concept is all the more sombre when considering he didn’t lose his battle with heroin for another ten years after the album’s release.

His message was the antithesis to the glamour of the rock and roll lifestyle. Yes, many artists sang of the downside of drugs before and after Dirt, but Staley’s delivery was straight from the bones. His mental and physical despair was projected not just by his lyrics, but by the often torturous way he sang them as well. It could be said that Layne played a character in Dirt, taking on the monstrous role of addiction itself. It was a performance of both heart and soul, and arguably the most riveting of his all too short career.

Voice and music combined, Dirt was a groundbreaking piece of work.

I always liked grunge, but while I enjoyed listening to Pearl Jam, Nirvana, or Soundgarden, Alice In Chains had a special place in my musical heart. Definitely the most ‘metal’-rooted of the genre’s big names, their amazing sound, fantastic vocals, and overall earthy vibe placed them on my pantheon of great bands, and they are with me since many, many years.

Alice In Chains are still a force to reckon with, which they impressively demonstrated with their latest release Rainier Fog. Nevertheless: go ask around their fanbase, and a huge amount of people will tell you that Dirt is the band’s masterpiece. I consider myself one of them. Their second album, released in 1992, is not only the best grunge album ever made, above great albums such as Superunknown, Nevermind, and Ten, no, it’s also one of the best rock albums of the last 40 years.

What makes this album downright perfect? Well, let’s start on the production. Jerry Cantrell’s guitar tone is legendary; incredibly thick, warm and powerful, while hitting the right tones for a psychy, fuzzy, and nearly fragile vibe when they need it. Just listen to “Rooster” and how the track transitioned from a flanger-heavy verse to the amazingly epic chorus. The track is also a great showcase of another of the album’s qualities. The vocals are simply phenomenal. Layne Staley delivered a gut-wrenching performance on this album, but shines the most when he’s put in contrast with Jerry Cantrell’s more-or-less backing vocals. Did I mention how powerful and effective Mike Starr’s bass sounds? Or how astonishingly the album is mixed (kudos to Dave Jerden)? Did I talk about Sean Kinney’s elevating drum performance? The fantastic lyrics?

I have no idea why you are still reading. Words are nothing here. Listen to the album. Now.

Dirt by Alice In Chains begins with “Them Bones” and ends with “Would?”. Find me another album from the nineties with that firepower.

I got into Alice In Chains when I was in middle school, and they were the only grunge band that I continued to still like after I got into heavier music. When I revisited Dirt for this feature, I immediately realized that AIC are NOT grunge, they are straight-up metal. I think them being from Seattle when grunge was taking over lumped them into that category. But going back over this record, these dudes shred!

AIC write some pretty technical pieces, too! The incredible opener “Them Bones” is mainly in 7, with bits of 4/4. Following that, the next two songs are mainly in 6. Meaning the incredible “Down In A Hole” is the first song in 4/4. Dirt is not a concept album, but the middle section from “Junkhead” to “Angry Chair” tell a cohesive story about heroin use (a main theme of the album). In the midst of all the songs about drug use is the ‘ballad’ of the album: “Rooster”, written about guitarist Jerry Cantrell’s father and his experience in the Vietnam War.

The title track “Dirt” touches on suicide, homicide, and, of course, drug use. After going through all of these lyrics as an adult, it doesn’t surprise that vocalist Layne Staley eventually lost his life to heroin use. It almost seems like Staley and Cantrell were crying out for help through these exceptionally dark lyrics. The last line of “Would?” goes ‘If I would, could you?‘, which could be interpreted as ‘If I die, would you meet me again after death?‘.

Even in it’s darkness, Dirt is still an amazing album over 25 years later. By far one of the best to come out of the nineties.

The nostalgia was strong with us once again, but all things must come to an end. Like this episode of A Scene In Retrospect. Like, right now. But before you go, why not leave your thoughts on this band and album in the comments?

Come back in fourteen days if you want to see us dive head first into another classic record. Until then, stay safe, and as always…