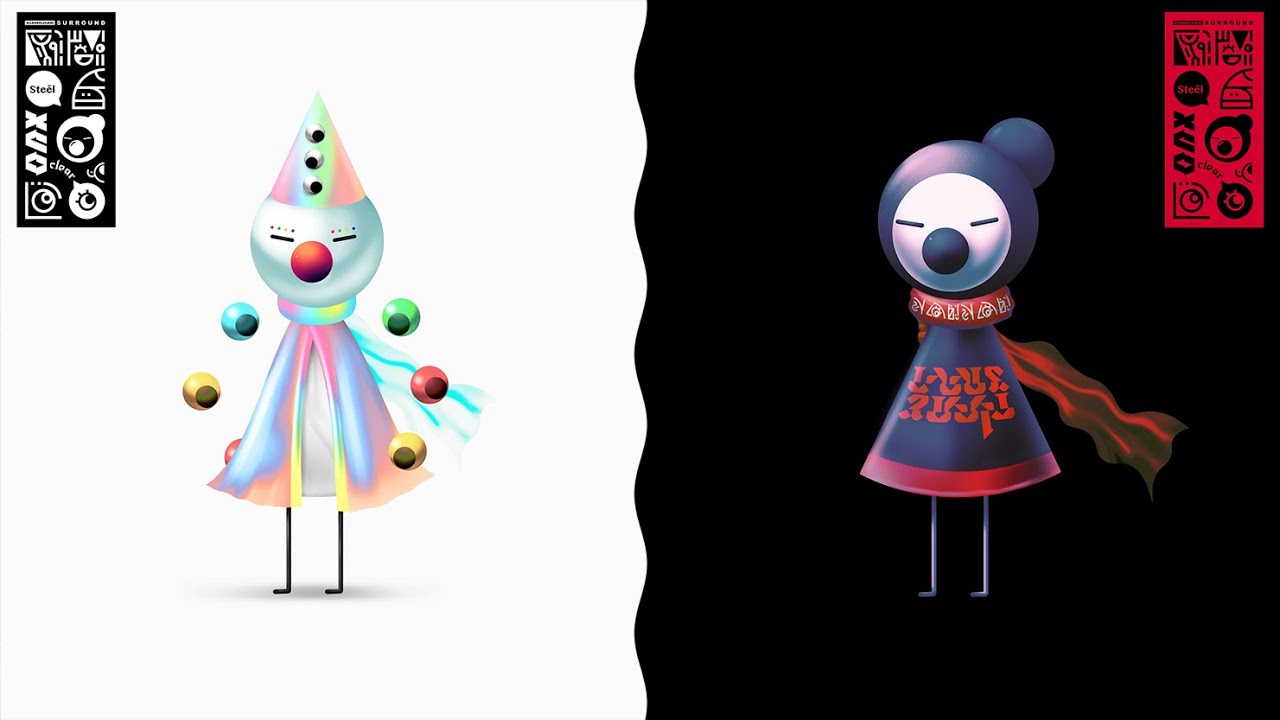 Iglooghost (aka Seamus Malliagh) is currently hot off the success of his 2017 debut album Neō Wax Bloom. He brought some depth and layering to the off-the-wall sound that took form on his 2015 EP Chinese Nü Yr. His previous work had already set the bar high for what he would do in 2018, and I was anticipating that great things would come down the pipeline. After hearing both Clear Tamei and Steel Mogu, I can’t see anyone being disappointed.

Both EPs follow a storyline preceding the events of Neō Wax Bloom by three thousand years. The records are set in an alternate dimension called ‘Mamu’, and follows the young ‘Grid Göd’ named Tamei. He and his companions don’t care for their god-in-training status and find themselves battling interdimensional evil-doers. Even most of the lyrics on these EPs are in a made-up language, which could very well be gibberish. Seems like the perfect backstory for music as eccentric as that of Iglooghost. Tripping on acid is optional.

If you want more info on said backstory, Malliagh’s interview with Exclaim! is a good place to start.

Let’s begin with some tracks that run at a slower pace than Iglooghost fans are accustomed to. Judging by the name alone, I’m guessing Clear Tamei is where the listener meets our ‘Grid Göd’ protagonist. After the brief introduction “Påleo Mamu”, we move on to “New Vectors”. There are some slower sections that incorporate strangely high-pitched vocals and strings, which I absolutely adore. I also love the marimba/xylophone sounds that come right before the warp speed drop around two minutes in.

The title track is an instant favorite. Iglooghost immediately starts a slow nonsense rap, which I guess is picked up by the character Tamei? An expansive rush of synths starts the song at a much slower, more adagio speed; then, the mournful strings and twinkling pianos give way to a speedy drum break. I particularly enjoy the ending to “Clear Tamei”, where the melody is slow, but the drums jitter away underneath.

One of the things that worried me going into these projects was the music going too hard for too long. There were many moments on Neō Wax Bloom where there was so much going on, so many sounds coming from all directions, that it felt like I was experiencing sensory overload. Thankfully, Gloo is beginning to strike a better balance of sounds on Clear Tamei, especially on the eight-minute closer “Shrine Hacker”. I’d rather not spoil this one too much, but I’ll just say that I appreciate how Iglooghost explores the sonic space he’s created in it.

On the ‘yin’ side to Clear Tamei‘s ‘yang’, we meet the lurid villain Mogu. Mogu is a ‘Xao’ that has traveled from the future to kill young Tamei before he becomes a full-fledged Grid Göd. The Grid Göd controls the life cycle of the Xao and Iglooghost (the creature, not the artist), so Mogu sets out to destroy him because ‘being a Xao sucks‘. That aggression he feels definitely carries over to the neck-break speeds and warped 808s of Steel Mogu.

After a hissing intro (“First Vōids”), we get right into the swing of things with “Steel Mogu”. This track feels a bit minimal for Gloo, in the sense that he’s not working with the same color pallet as on his other work. The synths feel metallic and smooth, and the percussion is definitely more simple than his usual output. But even with a slightly stripped-back sound, there is still a ton of layering going on with tracks like “Black Light Ultra”. I can’t get enough of that melody that bounced between different synths, and I appreciate the use of the Danny Brown verse sampled here.

“Mei Mode” is a more aggressive cut, one that would probably fit a bit better onto Gloo‘s debut by comparison. The strange vinyl scratch sounds and SOPHIE-inspired break make for an excellent dance banger. Closer “Nightracer” is another prototypical cut, featuring some pitched and processed rap verses mixed with nonsense chanting from schoolchildren. I especially appreciate the Ghost in the Shell-esque vocal harmonies, but “Nightracer” still feels like Iglooghost by the numbers.

Personally, I enjoy Clear Tamei a bit more than I enjoy Steel Mogu. I think on that particular EP, Iglooghost finally reacquired a skill he hasn’t shown since his days as a Milo collaborator: being able to slow the f@#$ down (unless you count the secret ambient album he dropped last year). The sound he’s curated here allows for his sonic wormhole journeys to breathe easier. And while I definitely enjoyed the material on Mogu, it felt like a slight rehash of Neō Wax Bloom. Clear Tamei gives me hope that Iglooghost will continue to evolve as a musician going forward.