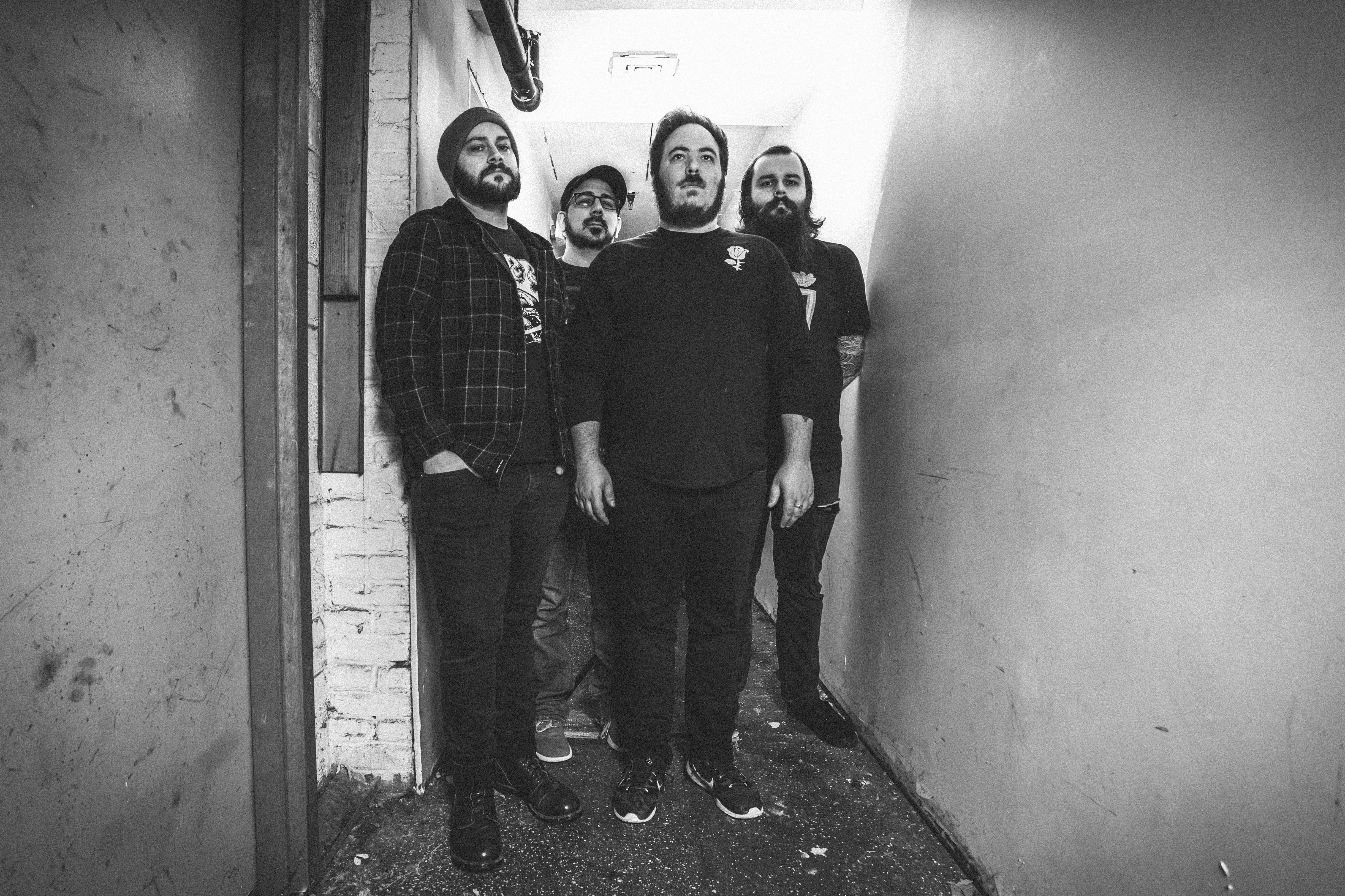 By Ashley JacobApril 8, 2019 No Comments

Off the back of a singular four-track entity, Sigils have earned themselves a great deal of positive attention. And deservedly so. You Built the Altar, You Lit the Leaves is an eloquent yet beastly opus, striking some remarkable harmonies between post-rock, blackgaze, and other stuff too. It was therefore with extreme pleasure that Everything Is Noise managed to catch up with two of the band members, Sal and Tom, about all things Sigils, starting with how much pleasant feedback this recent record has received.

Sal: ‘It means a whole lot to me that this stuff is resonating with anyone. I know for my part, this record came from my discovery and love for witchcraft and ritual when I was in a bad place, and needed it very badly. I’m also very aware of the privilege to get to practice and write about it, without being afraid of being killed for it.’

And like the feedback it has warranted, the evocative context of You Built the Alter, You Lit the Leaves is one of extreme positive feeling. Never let it be said that the relevant conventions of Sigils are downbeat by default. This is a band who prove that the opposite can also be true. Though somber at times, the album, in its own entrancing monolithic way, often evokes a sense of triumph, one that the band hope to communicate directly with the listener.

Sal: ‘I know that writing this album was a healing experience. I can only hope that anyone listening finds the same inside of it.’

Tom: ‘This certainly was a healing experience for the two of us and I would love for people to find that for themselves as well in this record…. A sense of solace, or hopefulness.’

In keeping with this hopeful nature are the record’s hauntingly rich vocals. Let’s keep in mind that, in a parallel universe, the music of Sigils may have been perfectly compatible with a plethora of growls. But to the ultimate benefit of the record, Sal opted to sing clean. The decision paid off, as it really takes the clarity of the music up a notch. Sal’s voice has an almost operatic, siren-like quality which acts as a spiritual uplift to the instruments. It’s harmoniously acute, and a key factor in the band’s distinct and unique sound.

Sal: ‘I spent most of my adult life writing and performing folk songs. It felt right to lean in to what each of us know; To play to our strengths and make something strange, rather than bend to convention. The worst it could be is bad, and that’s pretty tolerable.’

Tom: ‘I always loved the sound of good clean singing and gritting it up in the recording. It just feels right with this band, especially with the guitars being so low-tuned and bottom-heavy. Screaming or growling vocals would just be lost and wouldn’t do service to the songs. Sal’s voice just sits well and compliments the music of the record perfectly. Of course I’m biased, but hey.’

Which brings us to the history of Sigils and how the band originally came together. Tom and Sal’s friendship dates back many years and consists largely of a mutual sharing of musical interests. A mutual love of board-game nights also plays an important part of the band’s formation, as this is where the two are almost certainly convinced the original ideas came to be. What started as a fun time-passer, quickly grew into something which felt extremely personal and substantial. And so came the decision to do it for real. Tom insinuates that this change in tempo to his standard musical stomping ground was a well-needed breath of fresh air.

Tom: ‘The idea for this definitely came to life over a board-game night while listening to Sunn O))) or something. The concept was just such an odd thing for the two of us since it was a style of music neither of us had really tried writing for prior. I have been a huge fan of post-rock, stoner, and doom metal for a while, but have primarily played in much faster paced and/or chaotic hardcore and metal bands. I’ve always appreciated Sal’s music and songwriting, and his ear for tones…

‘He also kicks my ass at just about any game we play.’

But as stated, the musical game Sigils play, besides their blackgaze and post-rock hallmarks, is that of hard honest doom, more specifically the genre’s slow and groovy tempo. Sal and Tom explained what drew them to this foreboding and hypnotic convention in fairly simple terms. It seems the calling towards this patented style was an instinctive one, which explains why the arrangements sound so instinctive and natural across the breadth of the record.

Sal: ‘I’m too old and tired for fast music. But really, I just love slow, somber music. It’s a space I have always felt most comfortable in.’

Tom: ‘It’s entrancing and hypnotic. I’m so used to counting, and precise starts-and-stops, with the other bands I play in. And while that’s exciting and fun to play (and I will always love it), the Sigils songs just feel immersive and have a whole different feel and approach.’

As different as the feel and approach is, both band members suggested that the construction of this innovative new project was fairly linear. It seems like these guys know each other pretty well on the musical front. One will have heard many an iconic story about the turbulent production of an album. But the hotheadedness and arduous compromise, which becomes the inevitable byproduct of many a recording, was fully absent in the case of You Built the Altar, You Lit the Leaves. From A to B, Tom and Sal were nothing but happy with how the album came along.

Sal: ‘The challenges have been pretty minimal, to be honest. Tom and I both spent a lot of our time in projects where we were the sole writer of the music. It was the first time in a long time that either of us have done something truly collaborative. It wasn’t a challenge, so much as I think it took some getting used to; To trust someone’s creative intuition enough to let them run with it.’

You Built The Altar, You Lit The Leaves by SIGILS

And so, once the creation of the record was complete and the goods were delivered to a grateful masses, along came the next stage of Sigils‘ working life: The live shows. And one can only imagine how cathartic and entrancing playing music like this must be. After all, musicians can distribute an album to great acclaim, but there stills exists that singular degree of separation between artist and listener. Bringing this music to the public’s ears on a personal level, particular with an experience like Sigils must surely be a wondrous interaction for both sides.

Sal: ‘Honestly, it feels amazing. I am lucky to get to perform with some of my favorite people in the world. It feels amazing to share something really intimate with strangers.’

Tom: ‘It’s a blast, and we’re all excited to play these songs for our friends and some new faces. We have a few really great shows lined up with some great bands and friends like Ether, False Gods, Castle, Unearthly Trance and more. It’s going to be a fun year!’

As great as You Built the Altar, You Lit the Leaves is, it seems as though this band are just getting started. Such an intuitive creation of sounds can’t just be a one-off event, right? It’s no surprise to learn then, that there will be more from Sigils in the future. The near-spontaneous conception of this band has germinated something with long-lasting appeal, for both the musicians and the fans. Could is be possible that Tom and Sal’s grand Sigils opus is in fact yet to come? It certainly seems so.

Sal: ‘I know I am very much looking forward to writing the next one. Tom and I have fostered a kind of openness to each other that really encourages weirdness, and prioritizes genuine feeling and creativity. I am very excited to see what pops out next.’

Tom: ‘I’ve got a couple songs in the bank already for the next release, whatever that may be. I think we’ve got a pretty good foundation to start building on, and I am thrilled to see what comes.’

As are we, the adoring fans.

You Built the Altar, You Lit the Leaves is available to hear on Spotify and Bandcamp. For all other news and info on Sigils and their upcoming live shows, visit their facebook page.