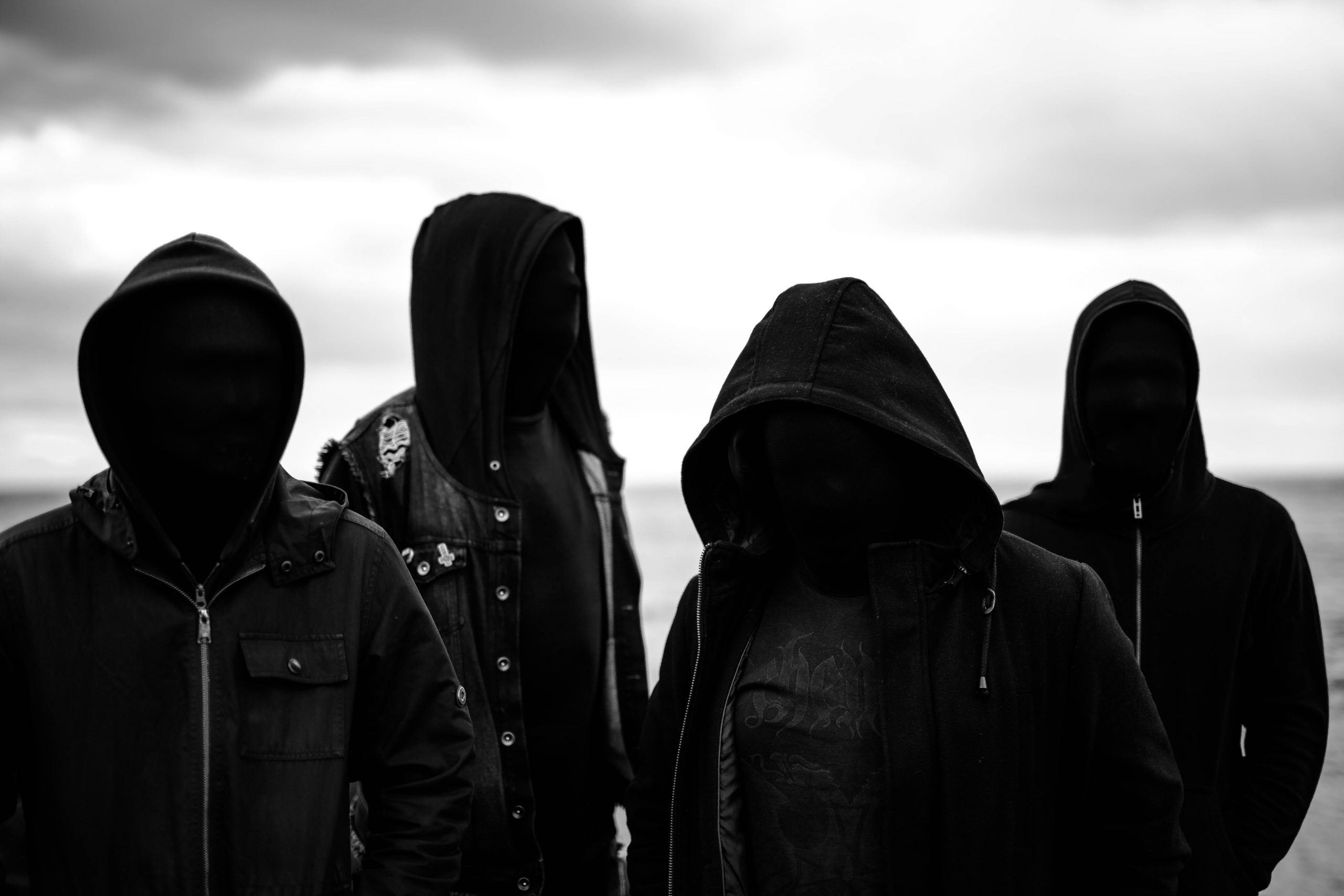 By Scott DemersDecember 16, 2019 No Comments

Exciting days are afoot! With the upcoming holiday season, this is the penultimate Weekly Featured Artist that will be posted this year at Everything Is Noise. So, of course, we had to give attention to some great music. Consider it a holiday gift because, let’s face it, y’all have been hella good to us this year.

Weird introduction aside, today we will be featuring the one and only Myriad Drone! These guys hail all the way from Melbourne, Australia and give us some of the best black/shoegaze and post-rock you’ve heard in a long time. One thing I want to point out from the get-go is that I was hugely surprised when I first hit play on Arka Morgana. The sound these guys put out had me hooked right from the first track and things only got better from there. I also managed to ask a few questions to Shane Mulholland, the main composer and guitar player.

‘It’s funny how we all ended up here, having all come from metal backgrounds in our prior projects. We somehow found each other through our love of instrumental music which to us evokes both emotion, and without lyrical direction, feelings of complete ambiguity.’

‘There’s a time when the operation of the machine become so odious, makes you so sick at heart’

Okay, okay, hype aside, let’s actually talk like professionals and adults. Myriad Drone released their newest album Arka Morgana October 18 of this year. They produce a combination of shoegaze and post-rock/metal sounds. Although, this explanation sounds like this would be a rather metal experience, it doesn’t pan out that way. Don’t get me wrong, there are some incredibly heavy moments found through Arka Morgana, but Myriad Drone are not afraid to take it down a few notches.

Take a song like “Atonement” that takes its time getting going in an almost familiar sounding post-rock fashion. That is until the vocals kick in and we hear the voice get sent all the way up while still managing to keep it soft sounding. At just under the three-minute mark we get an abrupt halt and march into metal territory. Yet, the vocals never let up on their angelic-like feel despite the chugging. Moments and songs like this are best left to experience because I haven’t even described the full song.

Before we get ahead of ourselves and deep dive into the music, let’s take a quick peek back in the past. On my ever-growing shows-to-watch list is a show called Twin Peaks. Back in 2016, our friends in Myriad Drone decided they wanted to cover the theme song and make it their own, and that they did. Their gazy and atmospheric rendition speaks to the full ability this band truly possess. Being fans of the show, they were able to capture the feel and emotion of what happens on screen and interpret it accordingly.

‘I always loved the Twin Peaks theme ever since I saw the show back in the 90s. Angelo Badalamenti is a fantastic composer and I thought ‘hey, this would sound amazing as a post rock song’. After we uploaded it, we sent out a few messages to Twin Peaks fan pages and were lucky enough to have it promoted through them. It was a little bit nerve racking to release this one, because as you may know Twin Peaks fans are really hardcore. Thankfully it was really well received.’

“The White Lodge – Laura Palmer’s Theme” was found on their first release, which was self-titled. This is our first introduction to Myriad Drone and they make their mark. The opening track to this album, “The Nuptial Flight”, opens up absolutely dripping with reverb and delay. The song quietly and slowly increases in tension but mostly it just allows itself to be present and beautiful. Their post-rock elements really shine through in this track. It’s not until about five-and-a-half minutes in when we get some more metallic moments, but this serves to add emotion more than anything.

As we follow along through the journey of the first album, we get more and more glimpses of the heavy nature lying underneath. Moving onto “Stay Low, Stay Quiet”, we begin, again, quietly and as a wholly different approach to the post-rock method. As we near the five-minute mark, things start bubble under the surface as a chugging of guitar makes itself known. “Where the Black Planets Roam Without Aim” starts off similarly, but veers off pretty quickly. We soon have a sense of foreboding through the use of heavy riffing and a bending wail of the guitar. This is one of the heavier tracks of the album, but it also stays firmly dunked in a vat of reverb.

We can quickly gather that Myriad Drone‘s first outing is a masterclass in all things post-rock and cinematics. We get the post- tropes we love so dearly, but done with enough nuance that it sounds brand new. There’s also a knowing sense of theatrics which really ups the intensity and emotional impact. Add on top of that a smattering of heaviness and we have a top-notch release.

‘Myriad Drone was formed through an intense series of fortunate (or unfortunate, depending on how you look at it) events. Composing began in January of 2014 in New Zealand by myself (Shane/Shamus) and continued throughout 2014, as I planned the move to Australia. After several line-up changes we arrived at the four who would write Arka Morgana in 2018. With the departure of Mikey Harland (bass) and Dominic Lewis (guitar) shortly after the album was completed, myself and drummer Frankie recruited the services of Simon Delmastro (bass) and Jacob Petrossian (guitar and vox) to help us navigate Myriad Drone into the future.’

‘And you’ve got to put your bodies upon the gears and upon the wheels, upon the levers, upon all the apparatus’

The most obvious different between Myriad Drone and Arka Morgana is the addition of vocals. For those who have been paying attention, you’ll note that the songs I’ve inserted have all been of the instrumental variety while I started out this feature talking about the vocals. Well, fear not, I’m not completely bat-shit – yet – because Myriad Drone inserted some throat instruments into their newest release. Obviously, this adds a whole other layer to the already intricate songs they’ve been putting out thus far.

“Time Enough At Last” kicks off the newest epoch familiarly, sounding similar to something you’d hear of the self-titled release. This is a post-rock ceremony, though this time it isn’t quite as laced with as much reverb, it’s more concentrated this time around. I guess we could say it’s more coated than drippy. Everything is cruising along as normal when suddenly we’re confronted with some vocal ‘oohs’, that’s when we know we’re in for some great treats.

Don’t get me wrong, this is still an instrumental album at heart – the vocals provided are merely another instrument added into the layers of atmosphere and mix. In my opinion, this was the best way to execute the addition of a voice into this kind of music. By keeping it away from the focal point, we get more emotion and a more interesting version of a song.

“Please Stand By…” is a heavy interlude which includes the famous speech from activist Mario Savio: ‘that unless we’re free, the machine will be prevented from working at all’. This interlude gives us the opportunity to reflect on the sad nature of our world and how this speech, despite being over 50 years old, is still relevant today. The nature and inspiration of the album become a little more known to us following the completion of this track. Luckily, Myriad Drone know to give us a little rest afterwards as they start the next song “Atonement”. The quiet opening is almost like a reassuring hug preventing us some internally imploding.

The rest of the album plays out like we’ve just lived through a trauma and are now trying to cope with it. There are quiet moments that allow us some thinking time and there are some thunderous instances which crash around like our traumatic thoughts. “Disguidance” is a culmination of everything good Myriad Drone is about. It’s a near 10-minute epic which weaves in and out atmosphere and heaviness. To me, this is the stand-out track on Arka Morgana because it nicely summarizes everything we’ve been through and leads up nicely the closer of the album.

“Unrequited” sends us off calmly and nicely all snuggled warm in our blanket of atmosphere. It’s a melancholy goodbye after the trauma and roller coasters we’ve been through, but it’s not unkind. The package deal of their Myriad Drone and Arka Morgana releases are some of the most complete post-rock sounds you’ll hear in a long time. I’ve been around the block when it comes to this kind of music and can easily say that Myriad Drone lands up there in the top end of my favourites.

Onwards to glory, with how successful and fantastic Arka Morgana was, what’s next for Myriad Drone? Well Shane tells me, ‘Currently working on album number 2, which we are hoping to record later in this year. Australian touring and eventually international tours, if things go to plan. :)’. This is all great news for those of us who would love to hear more from this band! ‘I don’t think any of us would be happy if we weren’t creating.’ which hopefully means we can expect to see and hear more of Myriad Drone for a few more albums.

Thanks again for checking in on some really great artists who deserve more spotlight. We’ve all discovered some amazing music and bands together this year. I, for one, cannot wait to keep exploring next year. I hope to see you all there right along with me. But before we all click away, please make sure you are following Myriad Drone on them internet forms so you can stay up to date with them. You can find them on Facebook, Instagram, and YouTube.