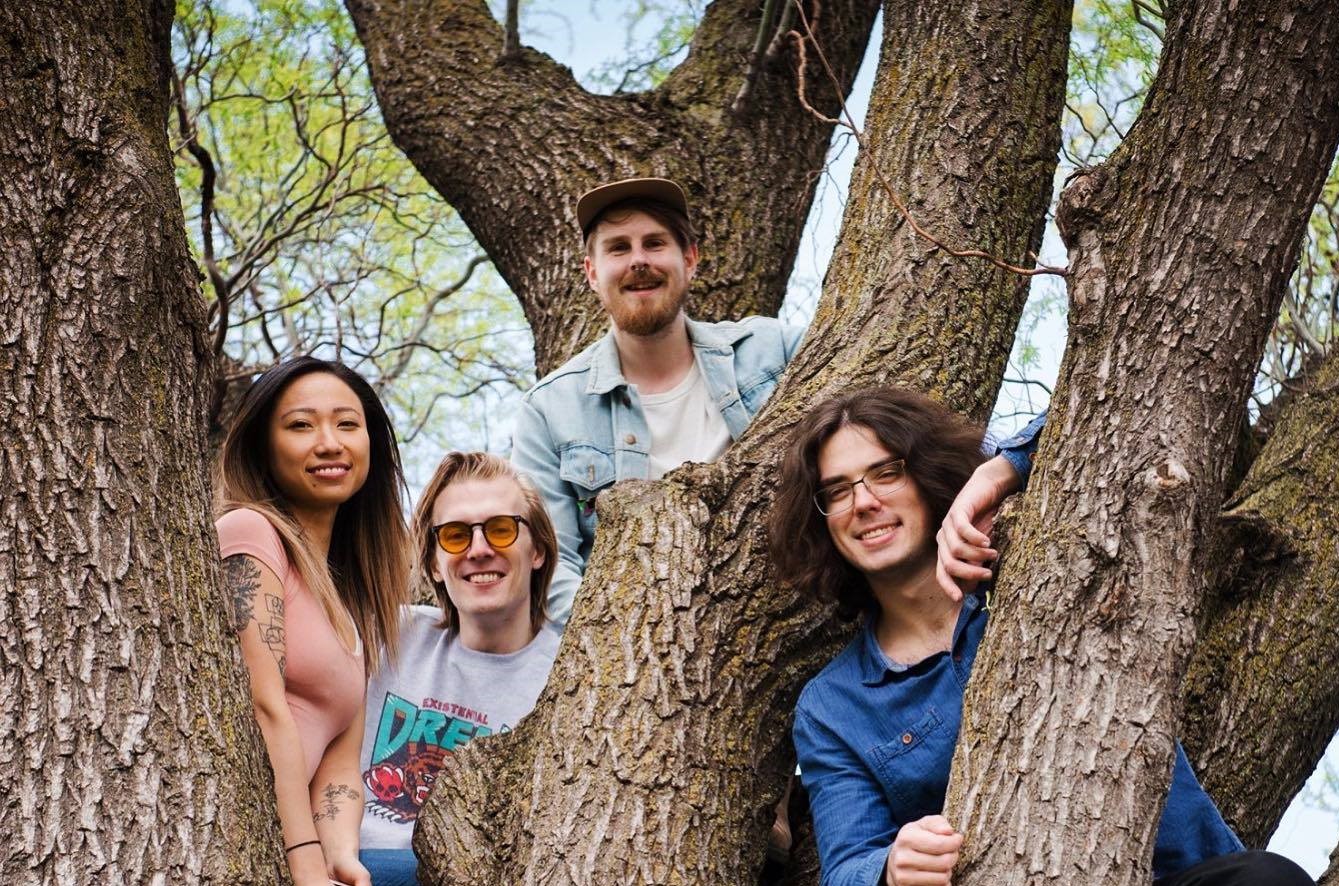 By Tim FleskesSeptember 21, 2020 No Comments

Hello all you lovely people out there and welcome. It’s Monday, you’re on Everything Is Noise, and I am so excited to introduce to you Group Therapy, a Canadian emo/dreampop quartet based in Toronto. I found them after their singer and vocalist Annie posted a video of her playing around with an idea on guitar in a shoegaze Facebook group I’m in. She posted the link to her project, Group Therapy, and keen on finding new music as I am, I obviously looked them up. From the moment I clicked play on their track “Blindfolded”, I was drawn in. Their music is very sparse in terms of complexity and technicality, but there’s such a carefully selected feeling to every single note they play. There is no pause or space that isn’t consciously used or unused. In a way, the songwriting reminded me of American Football‘s third record, as they also chose sparse writing with little glimpses of that twinkly Midwest emo style here and there. So I contacted them, asking if they’d be cool with me asking some questions, and Annie (guitar/vocals), Zach (bass) and Jarrad (drums) were happy to answer them.

The group came together when Zach was contacted by their (recently departed) lead guitarist, Michael, who was part of a mathcore outfit called Sea Noto, that Zach was recording. They reconnected later, when Zach saw Michael had made a Facebook post looking for musicians to start an emo/dreampop kind of band, and of course Zach wanted in. After Annie joined, she contacted Jarrad , who she previously got to know at a show of his old band Honesty. She initially asked him to open for her old band, though down the line she would ask him to join Group Therapy. Now that we established the group, we can go into the therapy part.

When asked about what drove them to making music, Annie said something that stuck with me: ‘My love for music is so inherent that it’s difficult to explain. For me making music, I just want people to feel even a fraction of the way I feel when I listen to my favorite artists.’ It’s a sentiment everyone in Group Therapy can agree with. Naturally, they all had the feeling to express and share their creation. Jarrad taught himself to play guitar after hearing his dad listening to AC/DC. To him, Angus Young was the coolest guy on earth back then. It was only natural to eventually to start making his own music, writing his own riffs and songs, coming up with something he’d find fulfilling.

Zach received piano lessons around the age of ten, though he admits not sticking with them for long. Although he had a passion for music, Zach did not initially plan on becoming a musician. Instead he wanted to go into video game development, even if he did plan to focus video game audio. In the end, both did not go with their initial instruments, Jarrad turning to drums and Zach picking up the bass.  Annie is probably the newest to music in that she only got into playing music live in the last two years, but she can’t imagine not playing music anymore.

What they also all share is a love for the good old wall of sound. While Annie just flat out states that she always liked the sound of immense noise walls, Zach and Jarrad gave a few examples. Both apparently discovered a lot of new music in that vein through Tumblr, but Zach got his start as a fan of the Deafheaven sound. Jarrad on the other hand really liked My Bloody Valentine and has quite an amusing story from his teenage years featuring the band:

‘… I do remember a friend once asking me if I wanted to see My Bloody Valentine when I was about 16, and I said no because I thought he meant Bullet for My Valentine, who I am no fan of. Only after he saw the show did I realize I was thinking of the wrong band, and when I checked MBV out, I knew I had fucked up big time (I have since rectified that mistake and seen MBV live, which was well worth the wait).’

But their influences don’t stop there, with the band naming Deerhunter, Protomartyr, Radiohead, Torche, Cocteau Twins, The Cure, American Football and many more as their favorite bands. These influences are strongly reflected in their music, with their sound being somewhere between Midwest emo and early 2000s dream pop. Twinkly guitars, whimsical atmospheres, reinforced through melancholic and breathy vocals. The drums feel nice and fluent, almost suspended in time as droney rhythms go on and on. What I especially like about their music is that it never feels too self-indulgent; it has an air of self-awareness and authenticity to it. I’m more than happy to say this also reflects in the interaction I had with Group Therapy. While the group, at the time of writing this, only has two EPs and a song out, their music enchanted me with a natural, yet profound wonder. The music they make is sparkly, iridescent, but never pompous. It makes me drift through a space that has a clear cut start and endpoint, yet time dilates while you reflect on diverse emotions in the kaleidoscope of their spacey instrumental work. It’s like taking quaaludes while watching a rainbow through a telescope.

I want to close this with a rather wholesome sentiment Zach brought forth in the conversation:

‘You gotta have fun with it in some way, whether that’s pushing yourself physically/conceptually, getting ‘lost in the sauce’, or slipping tiny little jokes into your parts.’

You can find Group Therapy on Facebook, Bandcamp, and on Spotify