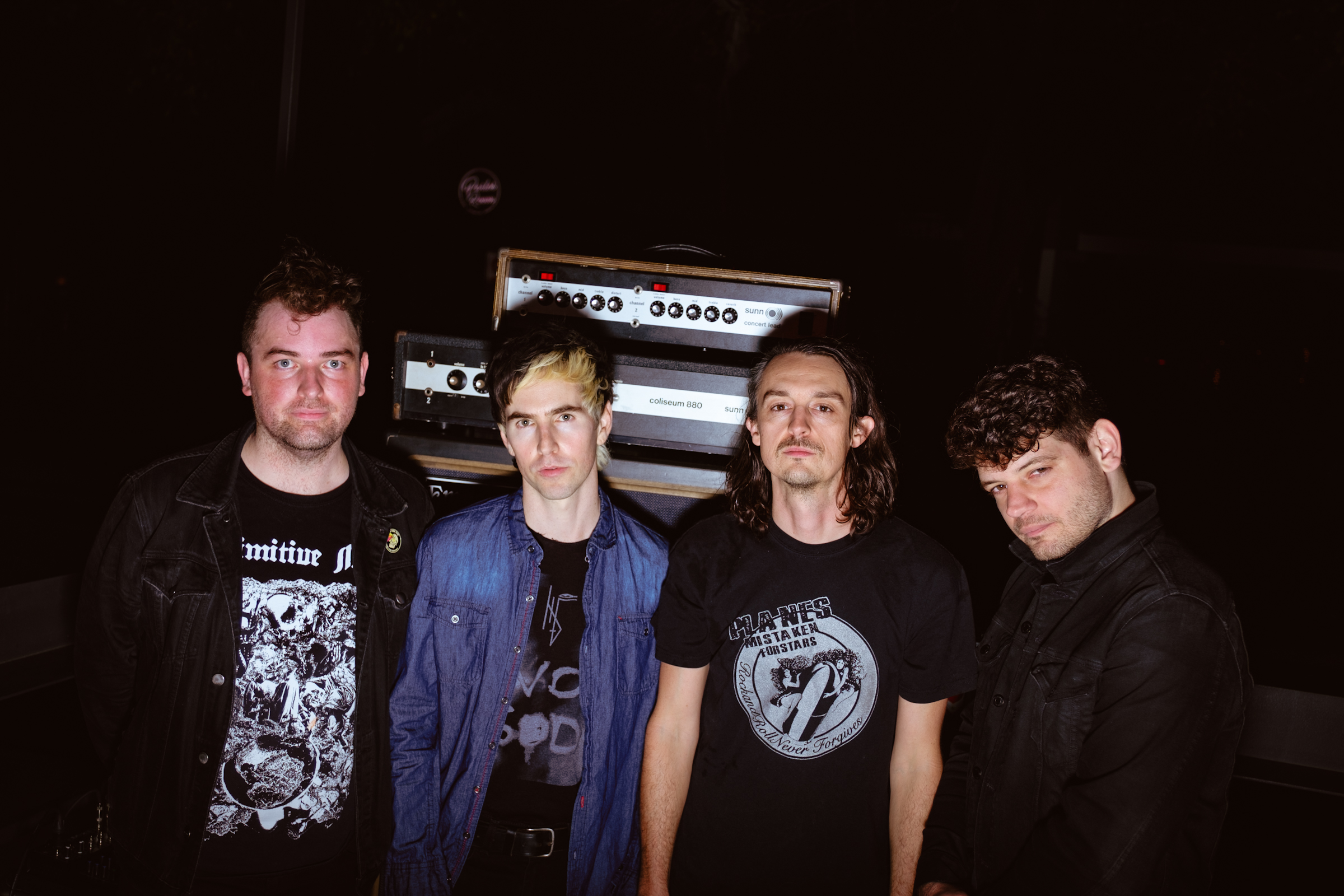 By Jake WaltersMarch 7, 2022 No Comments

As someone whose main hobbies are based around music, I am often asked who my favorite acts are, what bands I like, and in general, what kind of music I listen to. As you could expect, finding an answer to that isn’t always simple or easy. With the nearly unfettered access to music via the internet, the options are limitless, and finding something you’d like is always a simple search away. But in that limitless selection lies a problem that lies at the heart of many things in our digital media domains; choice paralysis. With so many options available, where should I spend my time and money? To the aforementioned questions, I have an answer; Glassing. I purchased a vinyl copy of their last album before I heard a single song from it. Why? Because I heard (and reviewed) Spotted Horse back in 2019 and I know that this band will always bring something interesting, unique, and dynamic to the table. So, if you were to bump into me on the street and you were to ask me a band that I should be following right now, my answer would include a list with Glassing at the top.

I think those of us who enjoy music habitually, love to listen to music that defies discrete classification. Glassing do a fine job of that in a very literal sense. If you do a simple search for this band you’ll likely see some wildly different genre descriptions attributed to them. Doom, Post-Hardcore, Blackened Post-Rock, and more are all things that people call this band. To be fair, they all work but none of them really sell the entire picture of what this band can do. I asked Glassing’s guitarist Cory Brim about the band’s inception and what helped bring all these disparate-but-related sounds together:

‘Dustin Coffman and I met when we both were driving giant white vans as our daily drivers. At the time I was just playing ambient solo shows that were probably the most boring thing on the planet to witness live, even with projecting public domain movies behind me on a big sheet. We had both recently moved to Austin (Dustin from San Antonio and me from New Orleans) when he was playing in a spazzy The Mars Volta-type of band. I came from what you could call a post-rock band (that’s being generous) and we had played together on tour in New Orleans. Once those bands thankfully and finally broke up, we both wanted to do something heavier and more aggressive.’

I don’t know about you, but this clears up a lot for me in how this band became who they are. The influences of post-rock, ambient textures, and lively energy of math rock all coalesce into something that while decidedly heavier, still evokes these styles to great effect. One can hear the ambient and post-rock influences on their new song “Godless Night” from Twin Dream and how it transitions into the very sludgy “Doppler” thereafter. It’s the blending of these sounds that makes listening to Glassing a pretty unique experience and still manages to feel relatable and familiar.

The birth of a band like this is something that can happen in a variety of places in the world but it makes a lot of sense to me that this act calls Austin, Texas home. The proclaimed capital of live music and a bustling scene that caters to artistic expression is a veritable breeding ground for musical expression and experimentation. It’s impossible to imagine a better place for a band as experimental and competent as Glassing to come into being in any other place, really.

‘Austin has been pretty inspiring for all the creative and unique punk, hardcore, metal, and noise stuff that’s here. There’s a ton of competitive pay-to-play metal too that we avoid but it’s easy to find a community here and we’re pretty proud to be a part of the scene that we’re in. I honestly couldn’t imagine doing this band in a place where we are isolated from a scene of similar-minded musicians. Bands like Exhalants, Easy Prey, God Shell, Portrayal of Guilt, etc. for sure keep us inspired and on our toes, which is encouraging. The best thing ever is to see your friends throwing down at your home shows. And our practice space was also where we threw tons of house shows so that helped build up our scene in Austin for the little angry niche of ours.’

To be surrounded by such energy and musicianship would no doubt keep anyone inspired and energized. Having a community that manages to feed and feed on such music is no doubt a boon to growth. When I knew I’d get to feature Glassing as our Weekly Featured Artist, I went back through their discography, not only because I enjoyed it so much, but to keep my ear to the metaphorical ground to listen for changes, their approach and see which sections of the band have been shaken and stirred.

For instance, if you back to the wonderful Spotted Horse it’s just as abrasive as you’d expect but comes out of the gate a bit more percussive and angular than Twin Dream. The use of space is still present and there are softer moments but what occupies those more tranquil moments varies. If you travel even further back to Light and Death, the formula that started it all is more at the surface but often in a more truncated manner. It’s not difficult to see what I’m saying here: Glassing isn’t one to rest too long on their proverbial laurels without shaking up the normal by adding, subtracting, and even multiplying the elements with which they play. Interestingly enough, aside from growing competence on their respective instruments, tunings have played a role in how the band has grown and changed since their inception:

‘A pivotal moment for me was when I started exploring different tunings that freed me from the prison of basic-ass metalcore hand positions that I was way too comfortable with for a long time. Being able to play chords that you wouldn’t normally be able to make, opened my mind up quite a bit to new sounds. We’ve carried that spirit forward and each album has had a singular different tuning than the last. I think we’re fully formed with Twin Dream but we’re certainly incapable of staying in one place for too long.’

As far as what we might expect from the band in the future, the impact of another Austin band seems to hold a key to where things might go from here:

‘We recently brought on Shaun Ringsmuth of Street Sects to our live show and as we write new material. That guy can make the sound of a cat attacking the devil sound beautiful and equally haunting so we definitely love having him on board. Personally, I’ve been messing with chorus and octave-up sounds more which I avoided for a long time to keep a ‘safe’ tone but we’re currently into some pretty unhinged new material right now that’s weird, uncomfortable, and super fun for us. We also are working a more electronically ambient set of songs too so we’re covering a bunch of ground.’

I love it when a band isn’t afraid of pushing themselves into uncomfortable, even scary new directions. Art is inherently a risk and safety is the enemy of creativity. The openness to strive for something new, uncomfortably new, is what truly sets the greats apart from the goods. With their latest album, Twin Dream, I think Glassing are greasing the wheels to change lanes from good to great. It also would seem that this trajectory will continue with additional experimentation on what’s to come.

With Twin Dream about half-written before the first wave of pandemic lockdowns and it being completed during that weird part of history, as one would imagine, the band is quite eager to hit the road with the new material. When I asked what plans are in the works I was assured that they have been ‘busting our asses to tour and sitting around hoping something comes our way has never been how we roll’ and that quoting the seminal Bad Santa, ‘shit in one hand and wish in the other…see which fills up first’ as their ethos for getting things done. I commend them for that. If that tour makes it anywhere near me, I guarantee I’ll be in attendance.

As a fan and a writer I urge you to give Glassing your time. If you’re looking for music that ‘touches on dual realities, decaying hope, the remorselessness of death’ through the sonic landscape of doom, post-metal, black metal, and post-hardcore, you can’t do any better than Glassing.