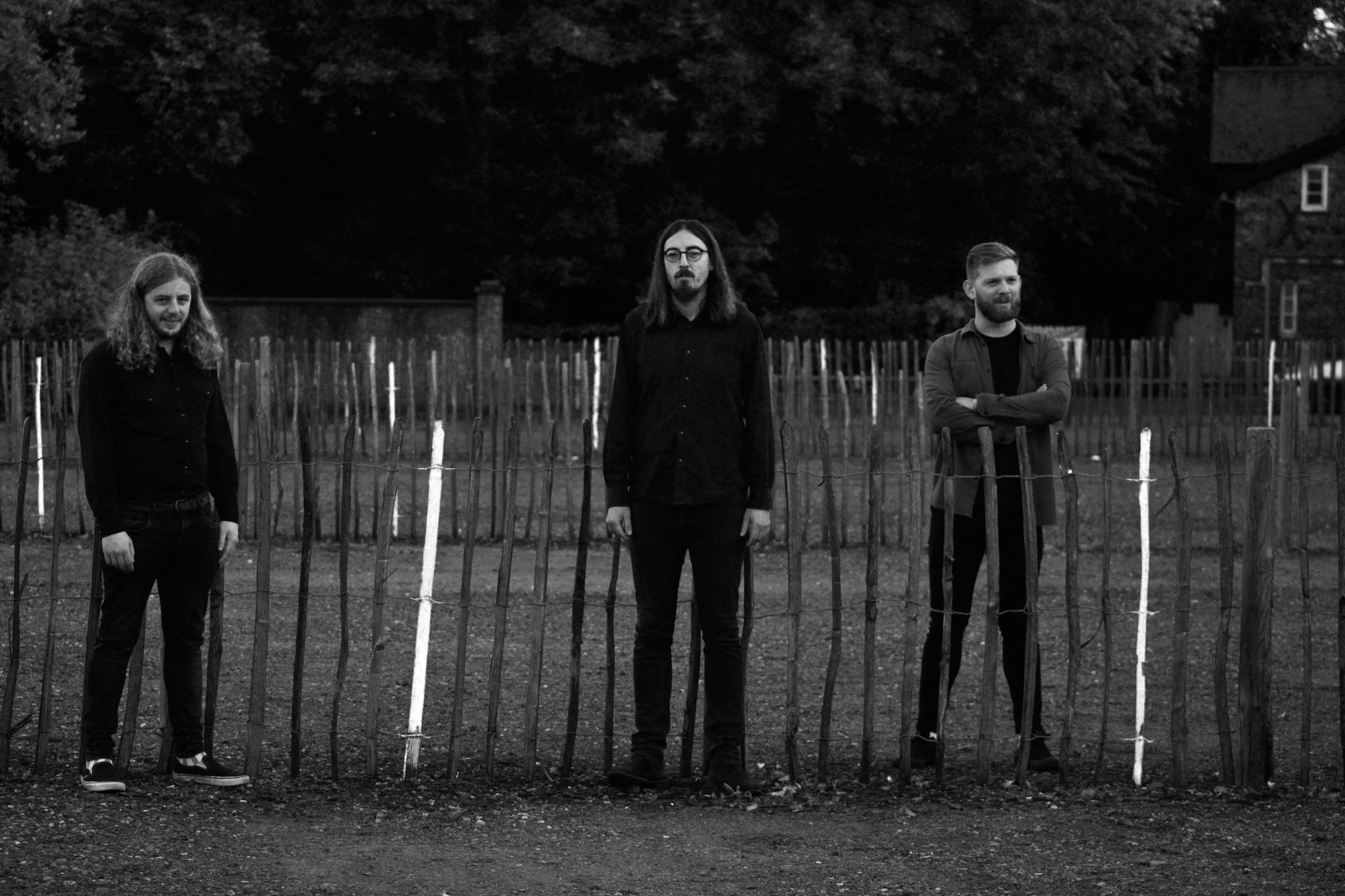 It’s always interesting starting a new year. For me, the beginning of 2021 had me excited about what releases the year would bring, as well as a new job role and a new band. The first release of the year that really resonated with me happened to coincide with my new band’s first gig, and was also in a similar style. It is, to date, my favourite release of the year: British trio Concrete Ships’ In Observance.

I knew from the first few tracks that I had struck something which was not only similar to my own band’s music, but also the way I wanted our music to sound. My band was never meant to sound unique and we will quite happily (and blatantly) rip off Swans and Daughters, without much care taken to hide those influences. On In Observance, I heard those same influences and the admiration Concrete Ships have for those bands, but executed with a bit more subtlety. It was an ‘oh shit! I wish we sounded like that!’ moment when I first heard this album, without bitterness or jealousy, only excitement. I was thrilled to discover my bandmates felt the same way about In Observance: ‘wow, these guys sound like us, but more refined!’.

Concrete Ships are very open about their influences, too. Vocally and lyrically, my picks of Swans and Daughters were on point, and the band reckon that Thee Oh Sees, Gnod, and The Mars Volta rub off on their more psychedelic sections. Interestingly, the band started out in 2017 without a clear idea of the kind of sound they were aiming for and ‘wrote some stuff in the first month or so and recorded some demos, but it ended up sounding like a bad Queens of the Stone Age tribute act’, so they ‘quickly scrapped those ideas and shifted direction’. The ideas for their 2018 EP largely ended up coming from ‘having lengthy, improvised jams’, which ‘helped form the style and feel of our music going forward’.

Now, if Concrete Ships are having a practise and something cool is coming out of their jam, they’ll record it on guitarist Joe Dickinson’s phone to listen back to later. The band say it’s ‘always difficult to reproduce certain moments that occur during an improvisation’, but they normally take them as a basis ‘and constantly build upon them to create new forms and add other parts that may emerge at later stages’. Concrete Ships ‘still like to retain some clear structure in our songs’, so even though they may continue to improvise certain sections, these ‘will usually be within more clearly defined sections and we’re not afraid to write in a catchy chorus here or there’.  Plus, it’s ‘likely there’s a lot of ideas on Joe [Dickinson]’s phone long forgotten about, probably called things like ‘cool new song idea 143’’, which could always turn into something more later.

The one song that differed from this approach was In Observance’s opening track, “Flotilla”, which was born out of ‘a bass riff Chris [Thompson] was playing around with and then the rest kind of fell into place fairly easily from there’. Concrete Ships found “Flotilla” had ‘a bit more of a traditional, formulaic approach to writing’, which resulted in it having ‘the most typical ‘song’ like structure on the album’. The band wonder: ‘Maybe we should try that approach more often, but what would be the fun in that?’.

By complete contrast, the album’s fantastic closing track “We Never Were” almost never was itself – Concrete Ships ‘came up with the main part of the song at a rehearsal one time and really liked how it sounded, however for some reason we either hadn’t recorded it or had recorded and couldn’t find it, so we thought it had been lost forever’. Fortunately, they eventually managed to remember it, resulting in one of the dreariest (and, to me, most original) songs on the album. As well as being fun to write, the band found recording the song enjoyable too ‘as Joe [Dickinson] had his guitar running through loads of fuzz pedals at once. You can hear them all individually being turned on just before the ending kicks in’.

Vocalist Thompson tends to leave writing the lyrics until after the instrumental structure of a song has been created, as this is something that he says ‘doesn’t come naturally’ to him and is ‘often quite a difficult process’. He says, ‘most of the lyrics have an overarching existential theme that are usually inspired by something I’ve been reading, or an attempt to articulate an experience or a mental and physical state’. Most of the songs’ vocal lines went through ‘quite a few rewrites’ before he was happy with them, something he was able to do as many of the songs had already been recorded instrumentally before he started writing the lyrics.

To help him get started, Thompson will often begin with a line or phrase that he builds upon, and, being ‘a big proponent of repetition…will try to lock in the rhythm of a line or phrase with the music and repeat it ad nauseum’. He adds ‘I’m also really bad at remembering lyrics, which isn’t helped by never writing them down, so repetition is great for that’. He also ‘explored the theme and experience of repetition as a concept in itself quite extensively in the lyrics on In Observance, particularly exploring the comfort/discomfort duality’. This theme of repetition ‘runs through the album, both musically and lyrically’, with the album title In Observance being ‘an acknowledgement’ of this theme, and ‘how dutifully and willingly we submit to repetition as a governing force in our lives’. This concept only emerged as part of the writing/recording process, so Concrete Ships didn’t feel they were ‘writing to a concept’.

Right at the start of the recording process for In Observance, Concrete Ships already had a specific drum sound in mind: ‘we knew that we wanted a big, roomy drum sound so we spent quite a bit of time trying to find the right space for us to find the sound we were looking for’. Initially, they tried out a large church hall, but they weren’t happy with the sound, and drummer Jamie Batt found his performance suffered due to it being very cold there as well. So, they decided to try out the stairwell in a 13th Century castle that a friend lived in, and found ‘it was perfect. The drums sounded huge and it was exactly the sound we had in mind for the album’.

Concrete Ships ‘got all the drums, guitar and bass and some vocals down at the beginning of 2020 and then Covid-19 hit and eventually the UK ended up in lockdown’. This resulted in a complete change in their recording process, and the rest of the album being recorded remotely. The remainder of the vocals were recorded by Thompson at his home, and guitarist Dickinson did all the mixing at home, too. Concrete Ships found this approach ‘odd, but we managed to make it work’, and agree that ‘the album was definitely shaped by that experience’.

Dickinson produced and mixed In Observance as well as the band’s EP, and Concrete Ships reckon that the production is ‘the most obvious difference’ between the two releases. They think ‘you can definitely hear how much he has grown and developed as a producer on In Observance’ and that ‘the whole album much more sonically textural with lots of different layers of stuff going on’. They also feel that their sound overall is ‘definitely more established and embedded on In Observance’. Personally, I feel 2018’s EP is a very raw take on Concrete Ships’ sound, in a charming, doomy sort of way – I wouldn’t change anything about it, and I feel better production would only detract from its sizzling heaviness. By the same token, I feel In Observance’s mix highlights everything it needs to, too; both releases are produced absolutely spot-on to what I feel they’re trying to convey.

Concrete Ships’ third release is already in the works, starting with a few ideas they began writing last year in between lockdowns. With the easing of restrictions, the band are ‘planning to continue working on those ideas and will hopefully be able to start jamming again and write some more new stuff’. Even though they currently feel that their sound is pretty solid and that the new release will definitely have similarities to In Observance in this regard, they are also wanting to explore new things, so they do think it could end up sounding ‘quite different’. I’d personally be quite interested to hear them explore the darker, dirgier parts of their sound, but whatever they end up creating, I’m sure it will be just as varied and exciting as their previous releases.

Even pre-pandemic, Concrete Ships’ hometown Lincoln was ‘not really known for its thriving music scene’, with rock covers being the preferred fare for many of the local venues. However, there is still ‘a small, quite close-knit DIY scene’ consisting of a few different bands that will frequently share bills, as well as ‘a couple of promoters that bring bands in from out of town’. For a bigger music scene, bands will often head to the nearby cities of Nottingham and Sheffield, and Concrete Ships hope that ‘something more vibrant and diverse will happen’ in Lincoln post-pandemic. For now, Concrete Ships have started booking some shows with the hope that they might actually get to play In Observance live, as they haven’t really been able to support the album live during these strange times.

It’s been a while since I’ve been excited about a band, so I hope this feature has encouraged you to check Concrete Ships out, too. You can listen to and pre-order In Observance through their Bandcamp page, and do follow them on Facebook as well.